The year 2019 sees Ewen Gellie (hard ‘g’) mark his 15th consecutive year building bicycle frames. Prior to that he had a five-year stint from 1988 until 1993, in the heyday of mountain bikes. He was racing then, and won the Australian downhill championships in ‘88 and ‘91 on frames he made for himself. His on-bike skills weren’t limited to going fast down mountainsides though, and he won Australian trials championships in ‘89 and ‘91. This off-road competition experience instilled in him a profound knowledge of what a bike frame can and should be able to withstand, a knowledge that is evident in the way he talks about bike frames today.

In 1993, now a qualified mechanical engineer, he began a series of roles in the motor industry, first with the Australian brand Holden working on engines, then he moved to Ford, and finally went to Toyota where he worked on improving chassis components and processes in new models.

In 2006 Gellie returned to his first engineering love,  bicycle frame building, and has been a full-time framebuilder since.

Gellie’s fabrication process involves welding the frame while it is in the frame fixture, rather than tacking and removing it for welding. Although this takes considerably more time, Gellie reckons this method is worth it for the gains in structural integrity.

Read about the Gellie bicycles below. 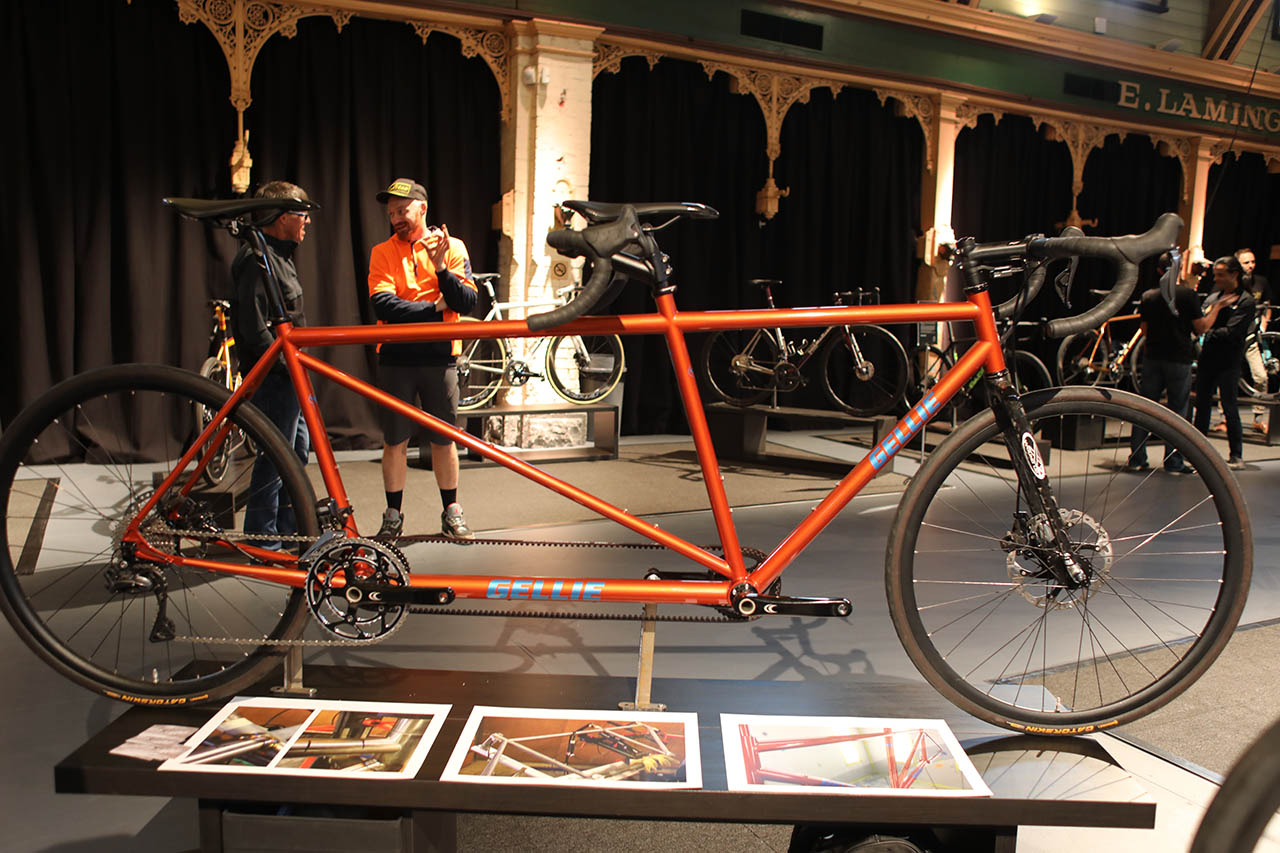 This is the 14th tandem Gellie has made, it took him about two weeks to build. He wrote: “This frame took all my decades of experience to create. It’s made from exotic steel alloys with extra material reinforcing the main joints and long, smooth transitions to ultra-thin tubing walls everywhere else.” The bike is designed to be relatively lightweight and very fast. 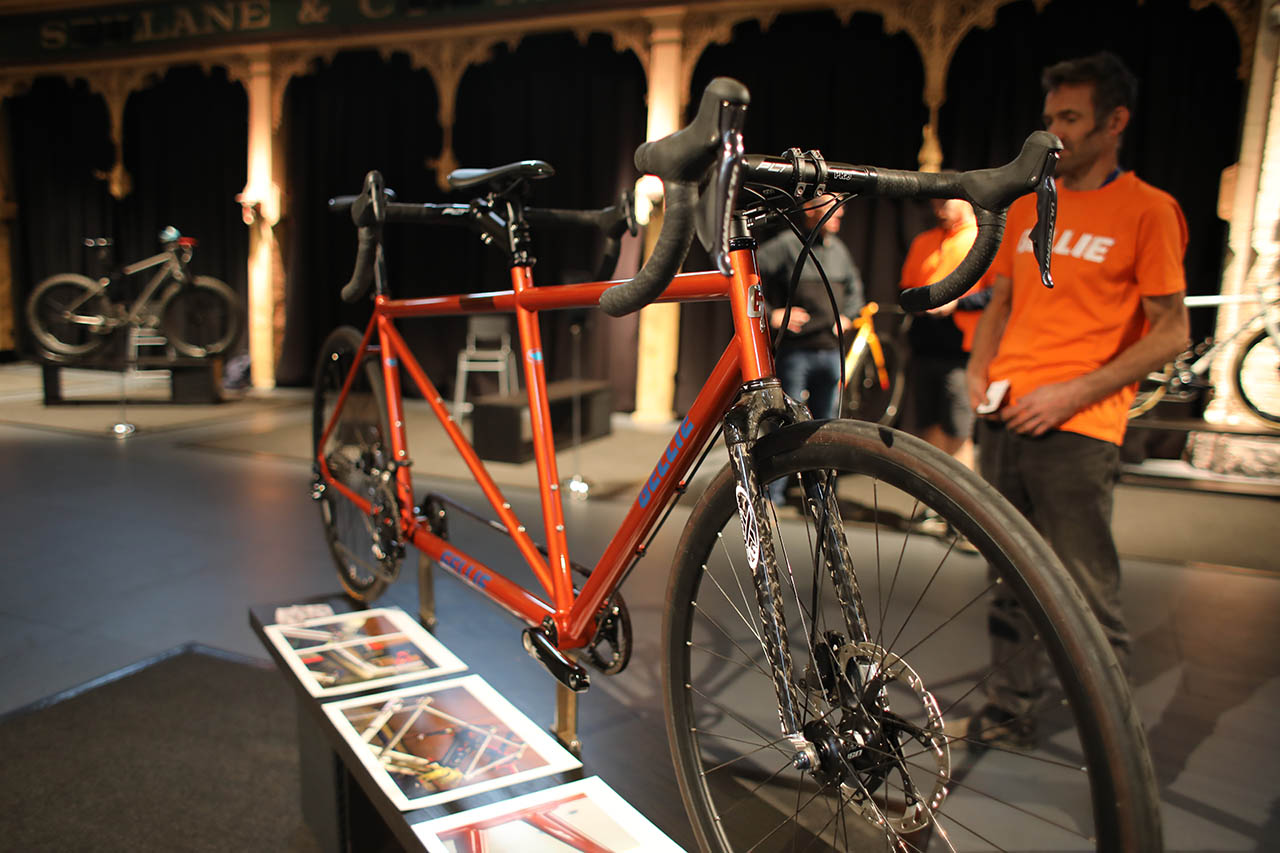 “There’s a lot in the tubing selection, I’ve used a mountain bike downtube for the top tube.  I could make a stiffer or less stiff version of this frame, it’s all about what the customer wants. For instance, these chainstays are dedicated tandem stays from Nova. They’re just monster. For somebody who wants a sporty type road tandem, it’s just the thing." Gellie rates steel as the most versatile and reliable material for bicycle construction. “Another customer rode a Cannondale tandem and commented on how much more comfortable this is. Aluminium tandems tend to be overbuilt ensure there’s no fatigue cracking, but that makes them less comfortable.” 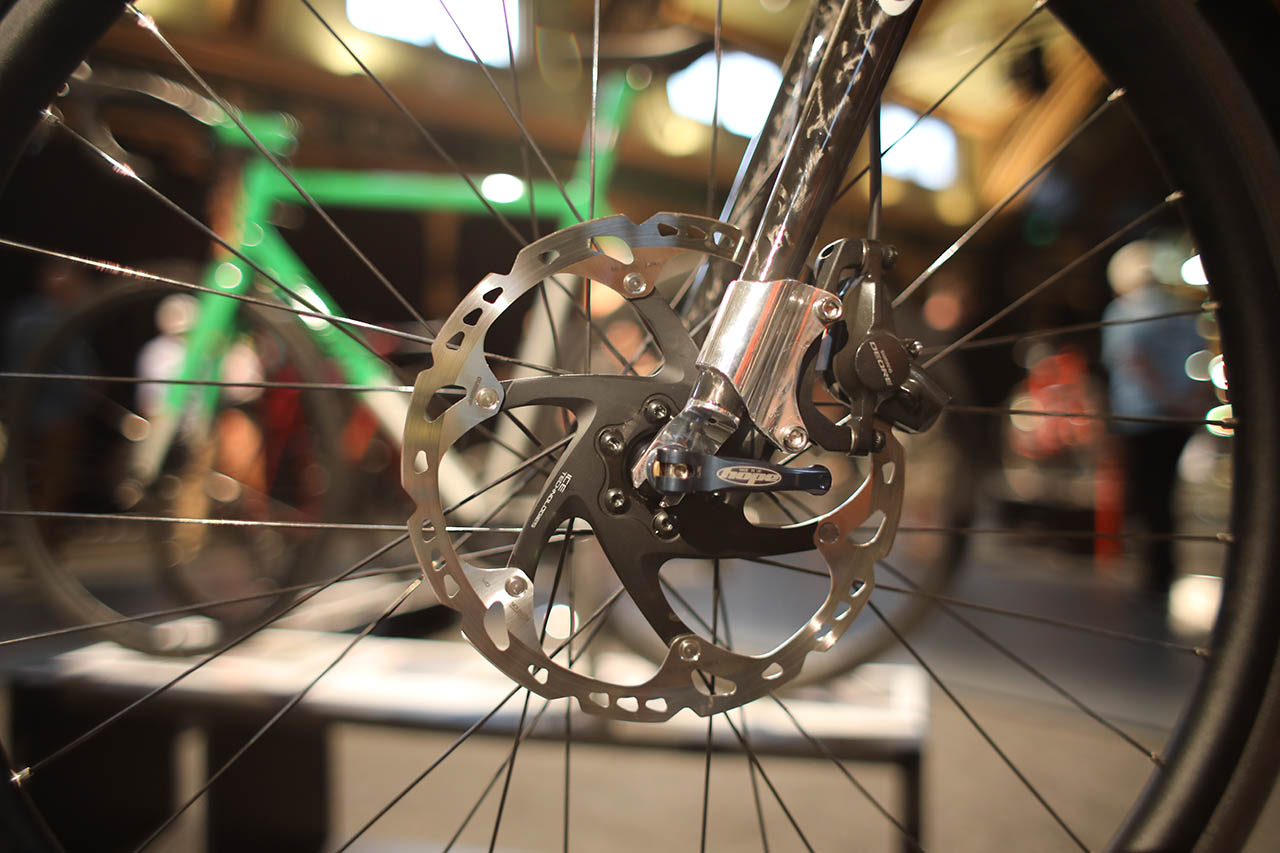 Then you’ve got to have serious big dropouts to support the disc, because it takes a lot of load. That’s a 180mm rotor, which is pretty big for a road bike, and of course at the front it’s 200mm. You’ve never felt how well disc brakes can truly work until you’ve ridden a tandem!” 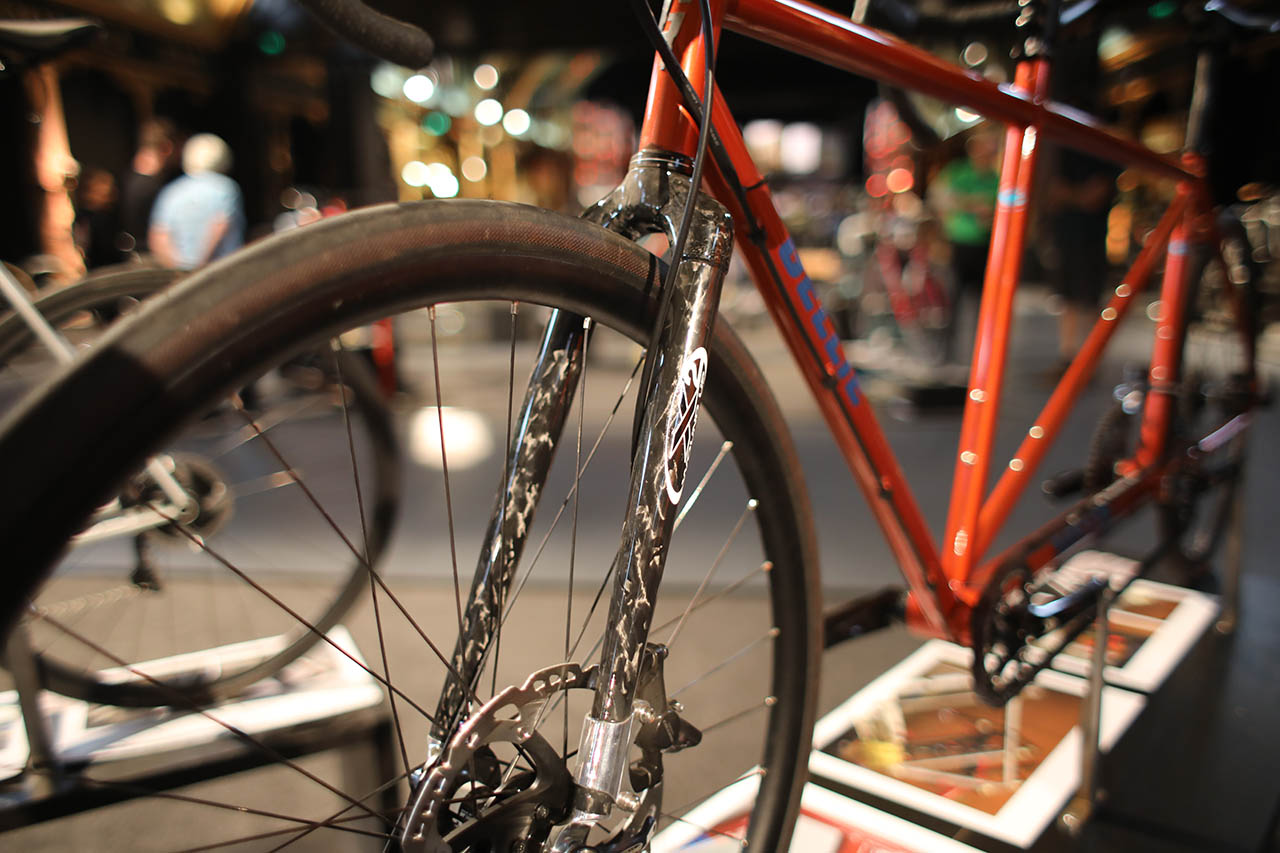 Forks are Wound-Up “A thinking person’s carbon fork, not too stiff.” 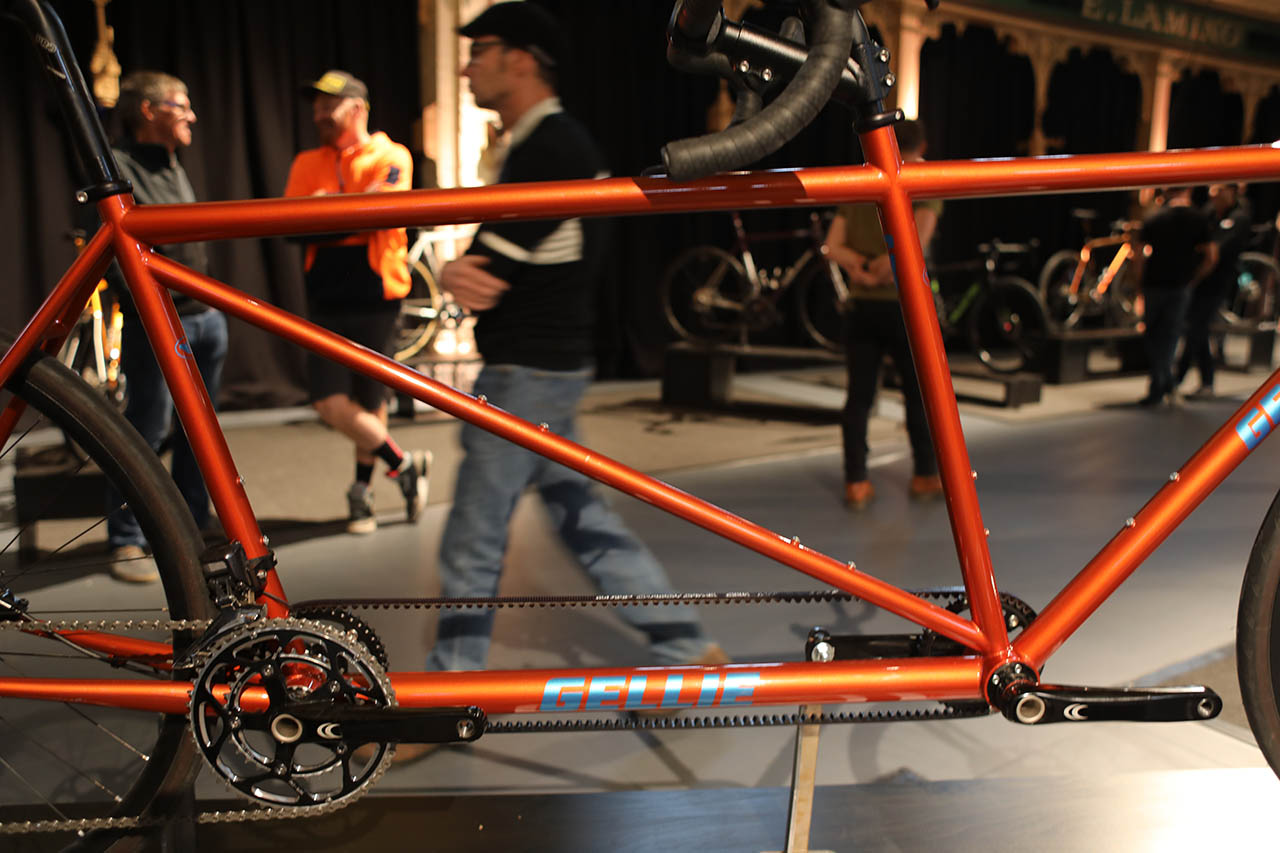 The stoker’s brace tube is made from two butted tubes, because a single butted tube in this length is not available. The custom fabrication leaves a slightly thicker middle section, but the important thing is the main load areas at each end have sufficient strength from the butting. "The diagonal tube oriented that way is in tension rather than compression, so a more slender tube can be used there… like an engineered truss," wrote Gellie on his Facebook page. He noted that Tom Ritchey’s tandems are similarly designed. 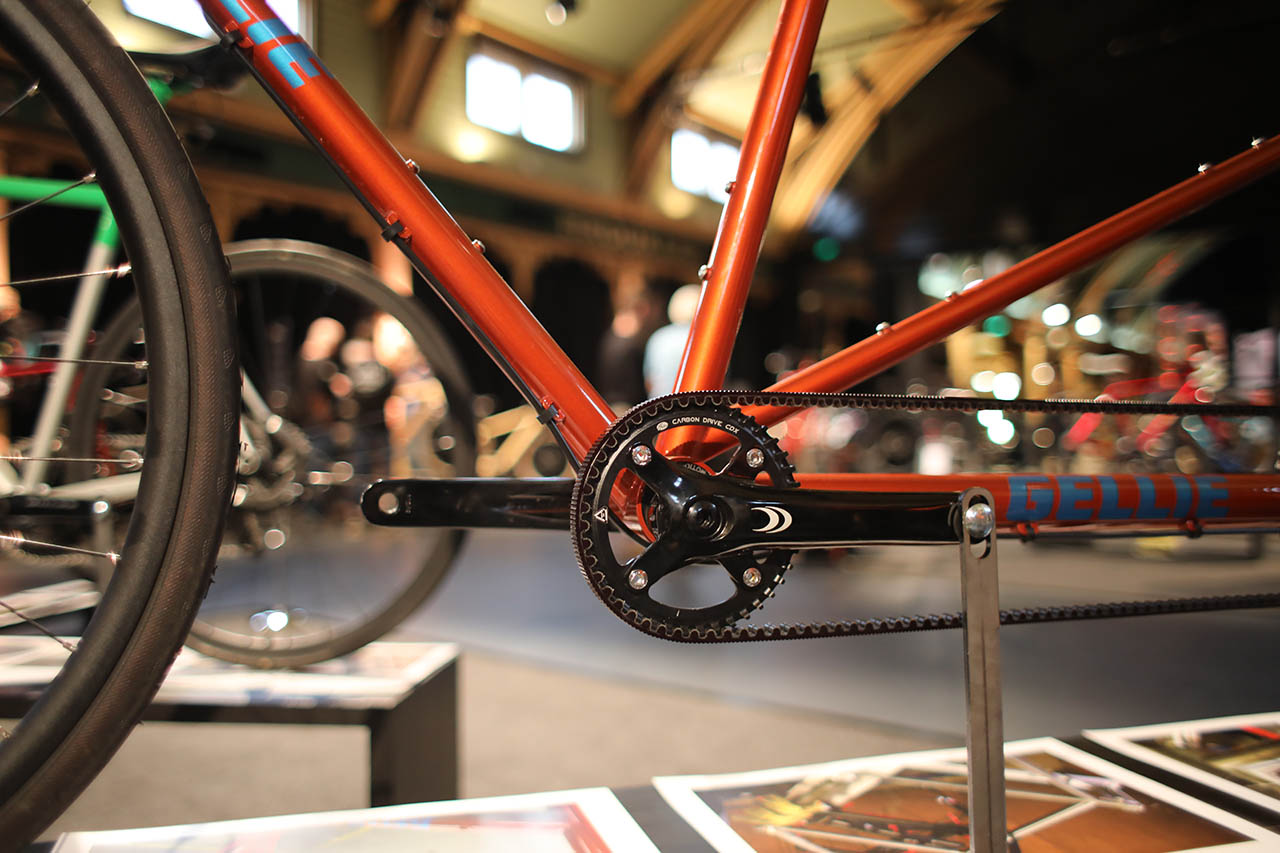 Gellie is pleased with the way the drive train has worked out. A Gates belt drive is used for the front transmission. “It’s great on a tandem, very low maintenance. You don’t have to touch it. ”The derailleurs are Shimano’s Di2, “This makes a lot of sense on a tandem because it trims the front derailleur for you as you change gears.” 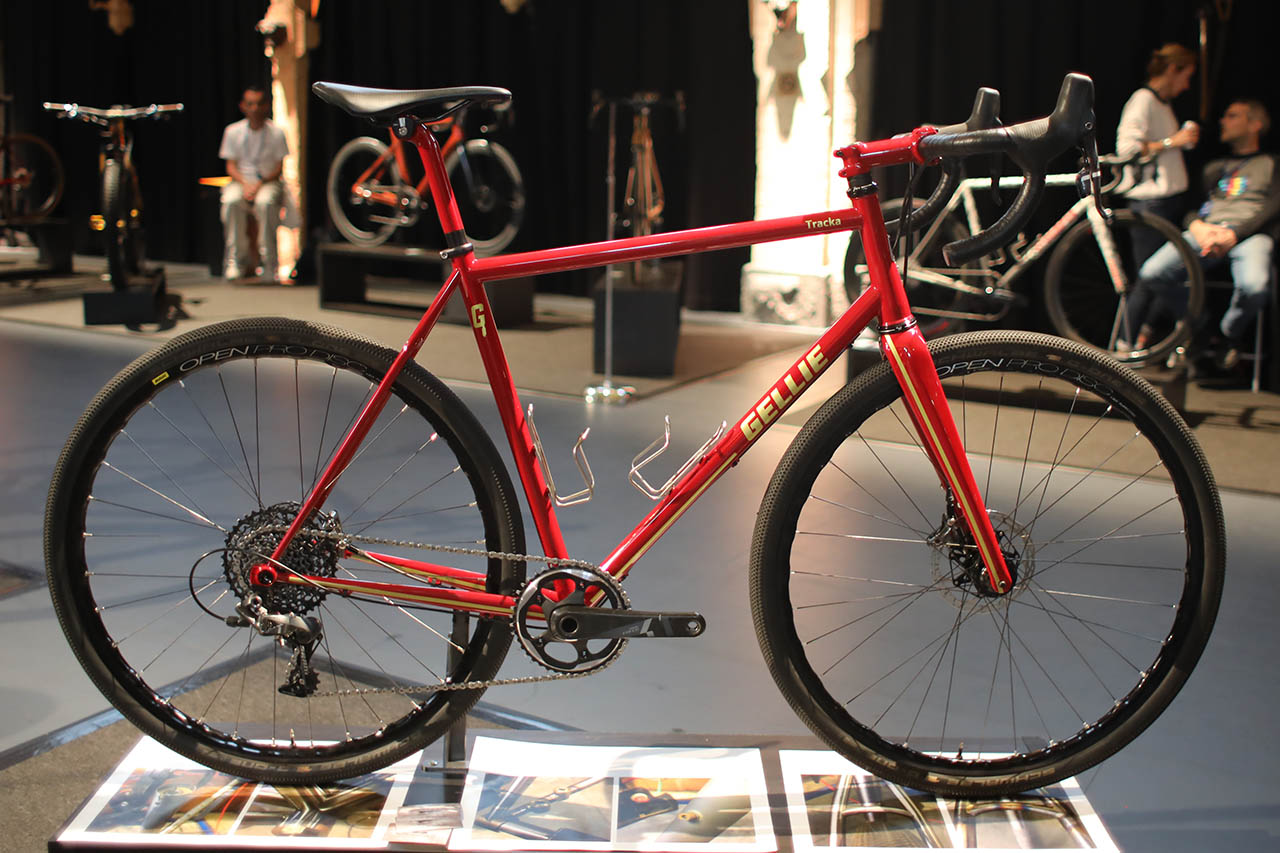 If you're wondering what the frame builder makes for himself, this is the place to look. “It's my interpretation of a gravel bike. Not super high-end, it rides well on and off road, it’s fast. It’s my favourite bike." 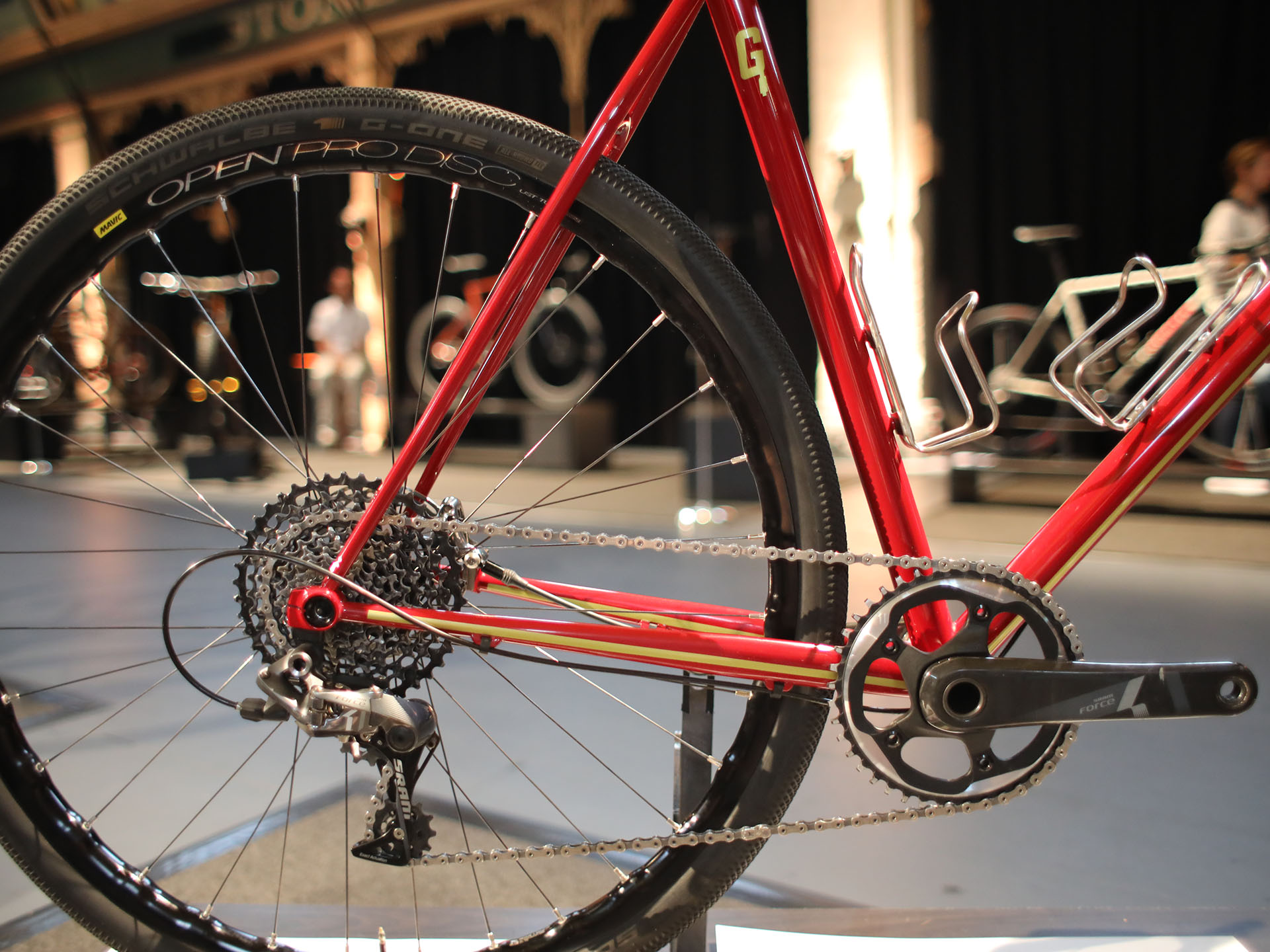 "Interestingly the chainstay length is perfect for really steep climbing. You can get better traction than a mountain bike. The point pressure means it really grips where it’s available, whereas a mountain bike tyre floats more on the surface.”

The tyres are Schwalbe’s 38mm G-One, which with a light dimpled tread pattern and supple feel offers good traction on loose surfaces without sacrificing much rolling resistance on road and hardpack. 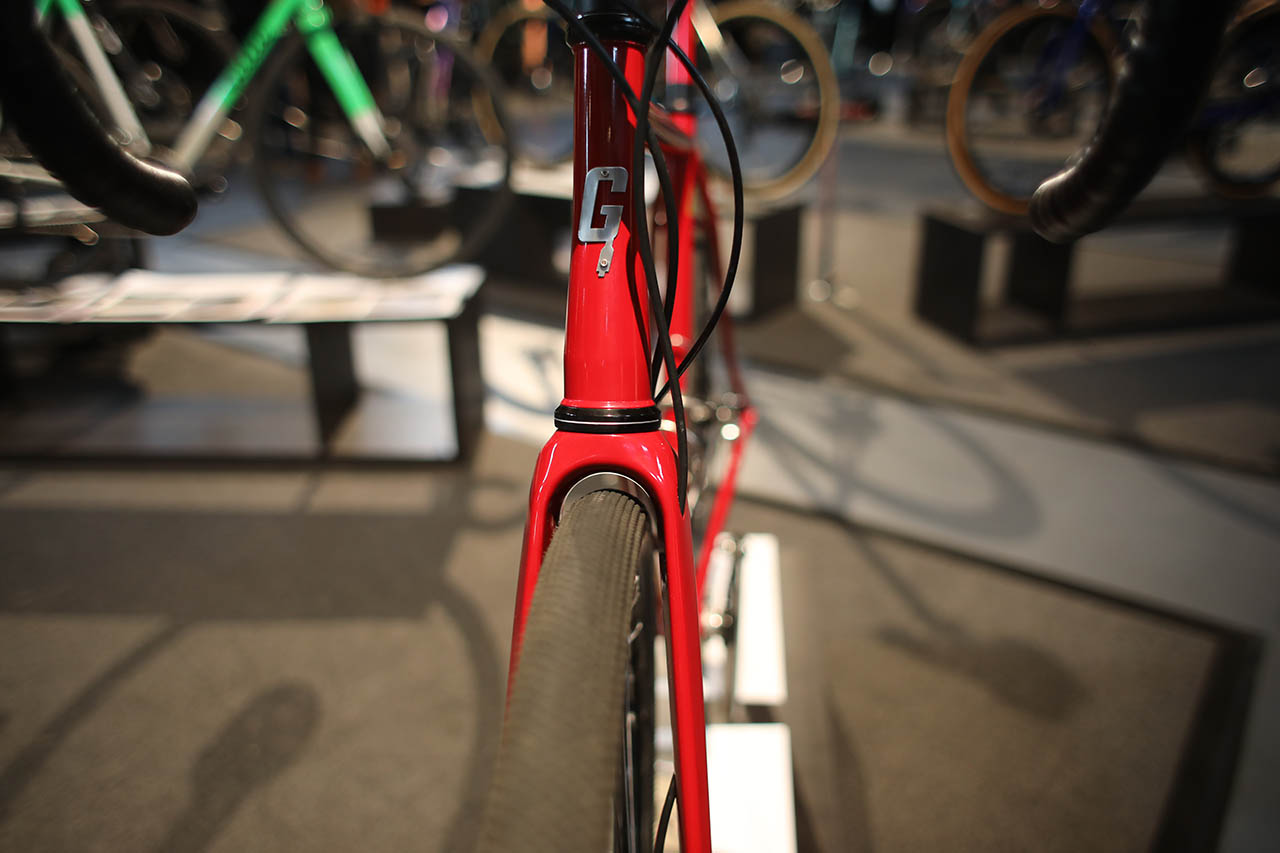 Gellie is a fan of the Columbus Futura gravel fork, fitted to this bike. “A year ago, and probably it still is, the best thru-axle carbon fork with big clearance,” he says. 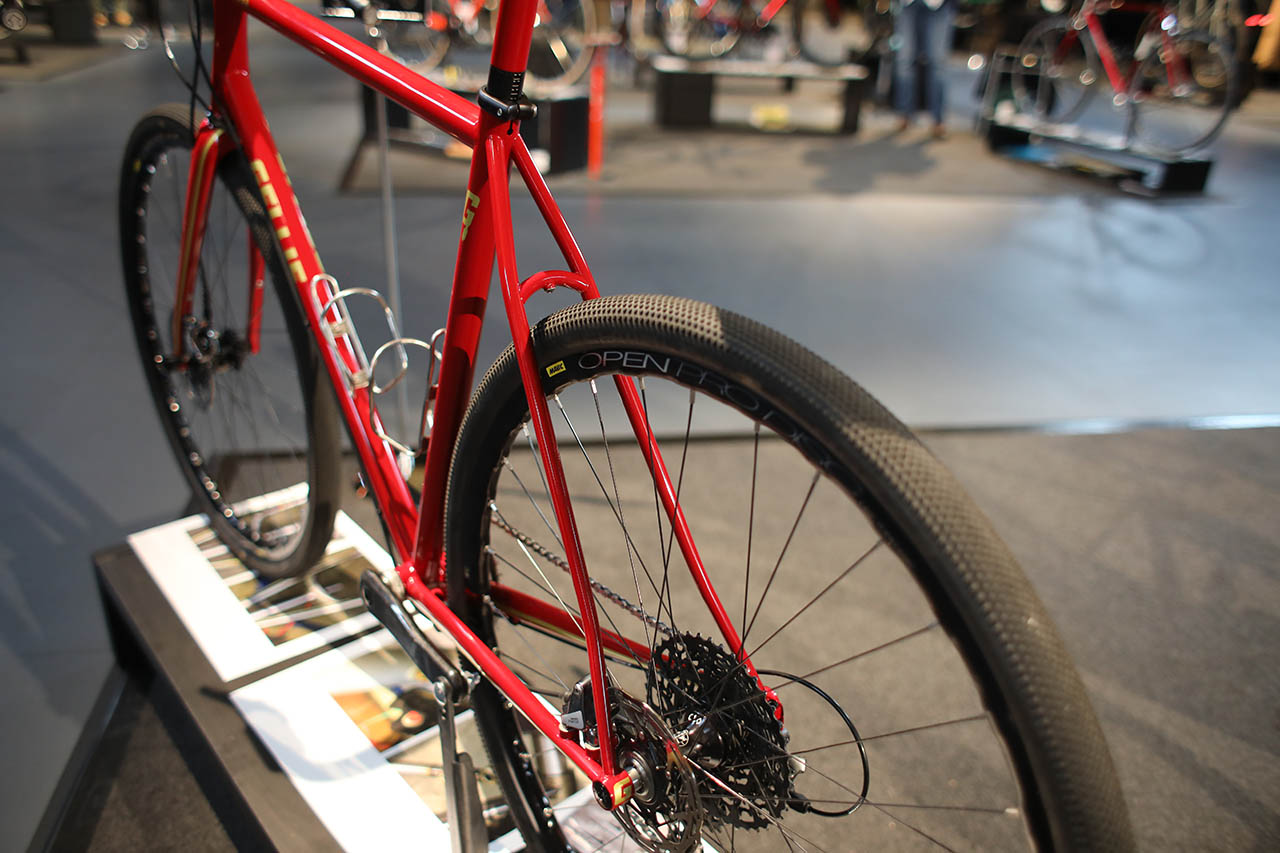 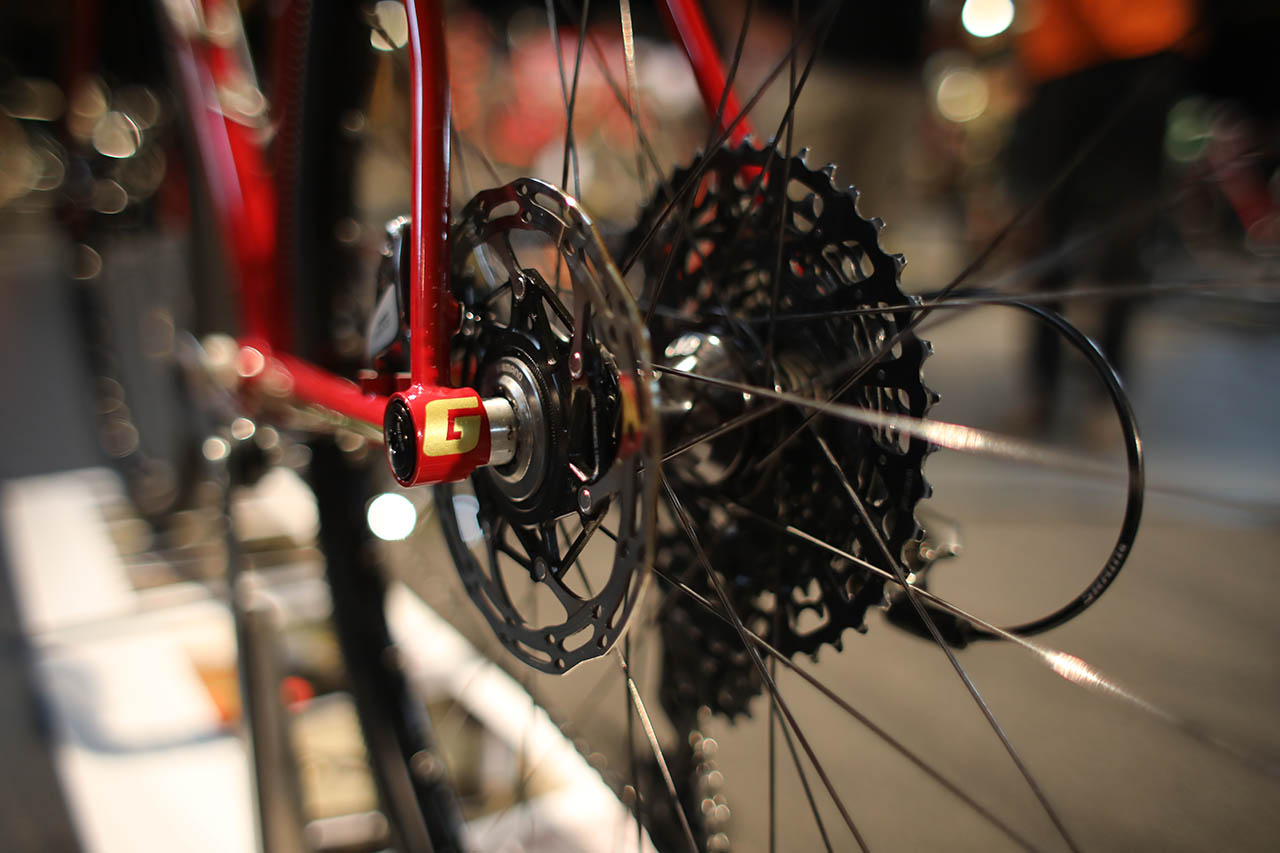 The thru axle rear dropout is from Syntace. 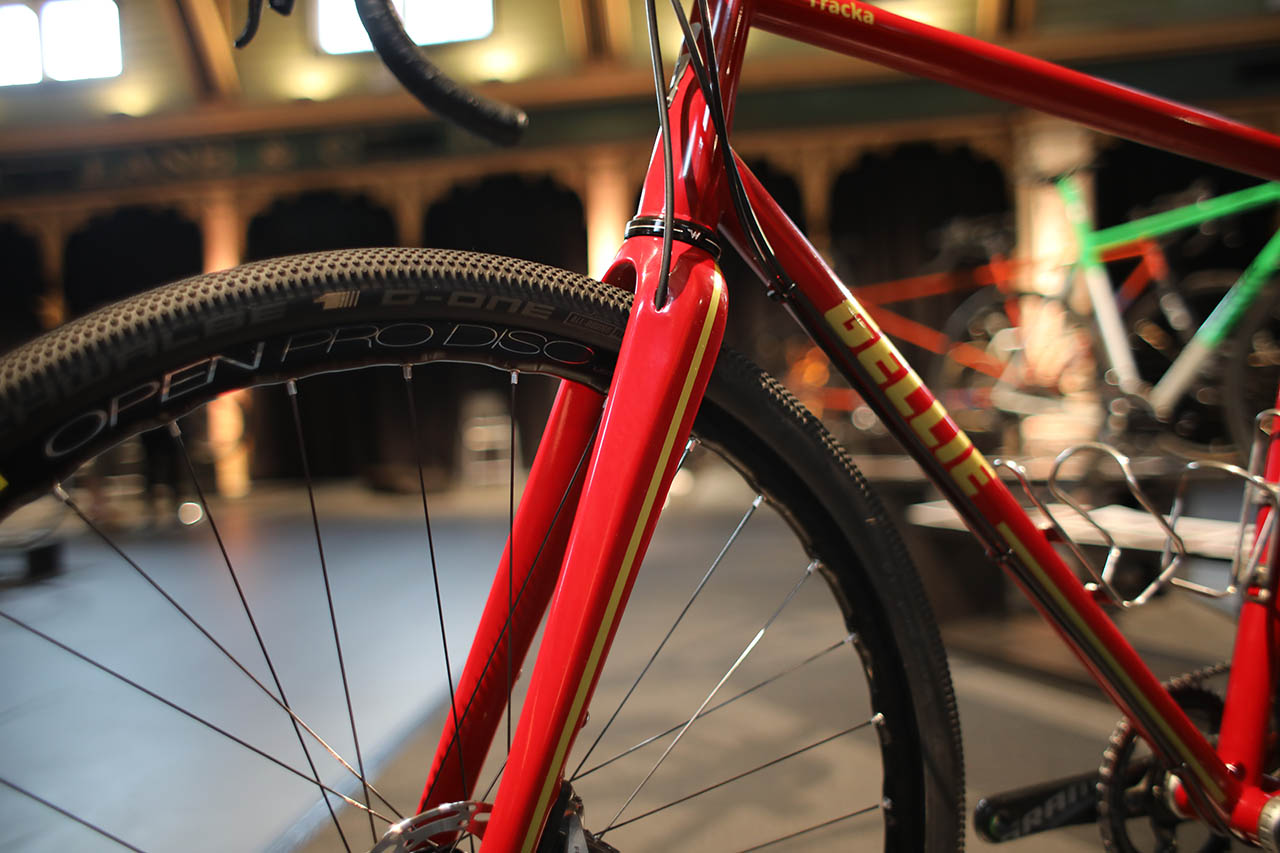 External cables are fitted, “For easy maintenance and working in crappy conditions.” 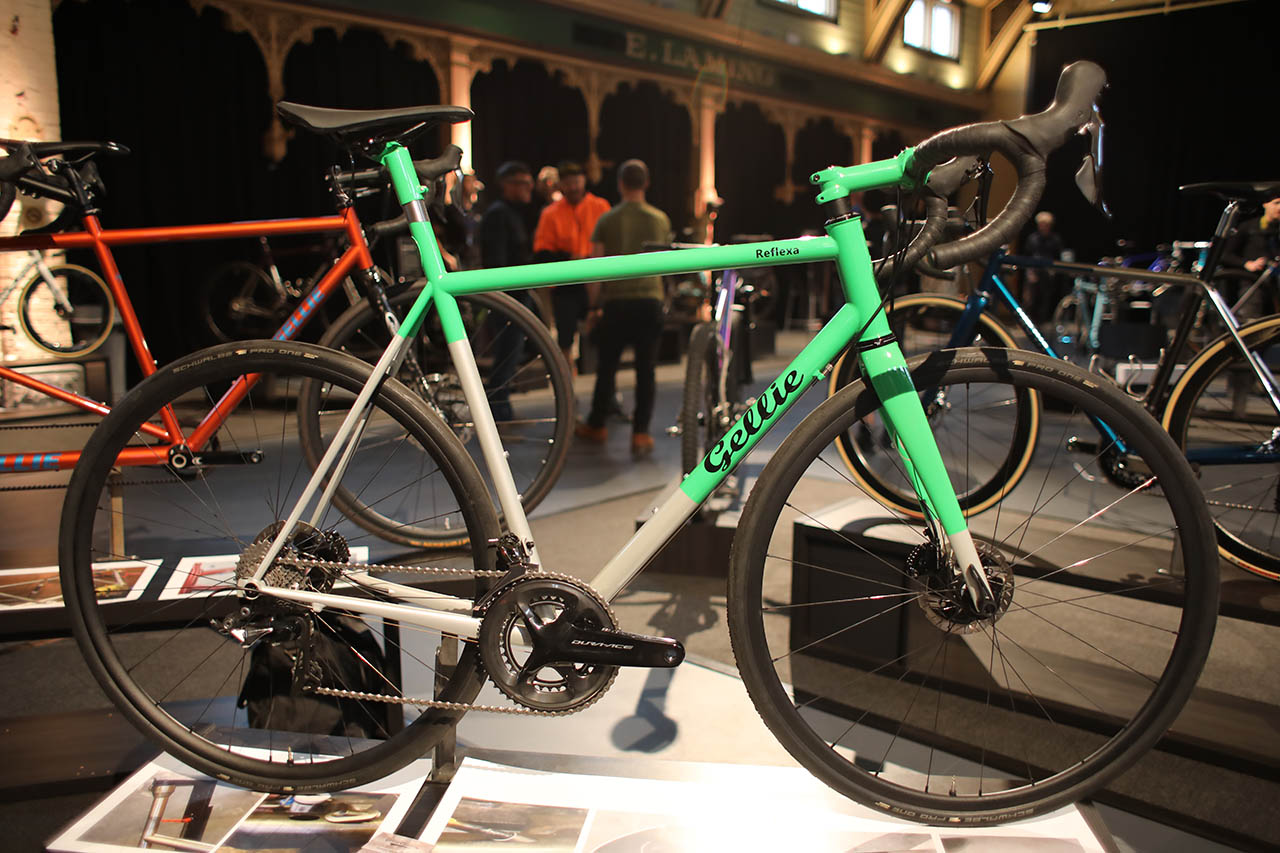 The pictured Reflexa is Gellie’s own road bike also. It features slender Columbus SL seat stays with a gentle S bend, Syntace thru axle dropouts and a Columbus carbon fork. 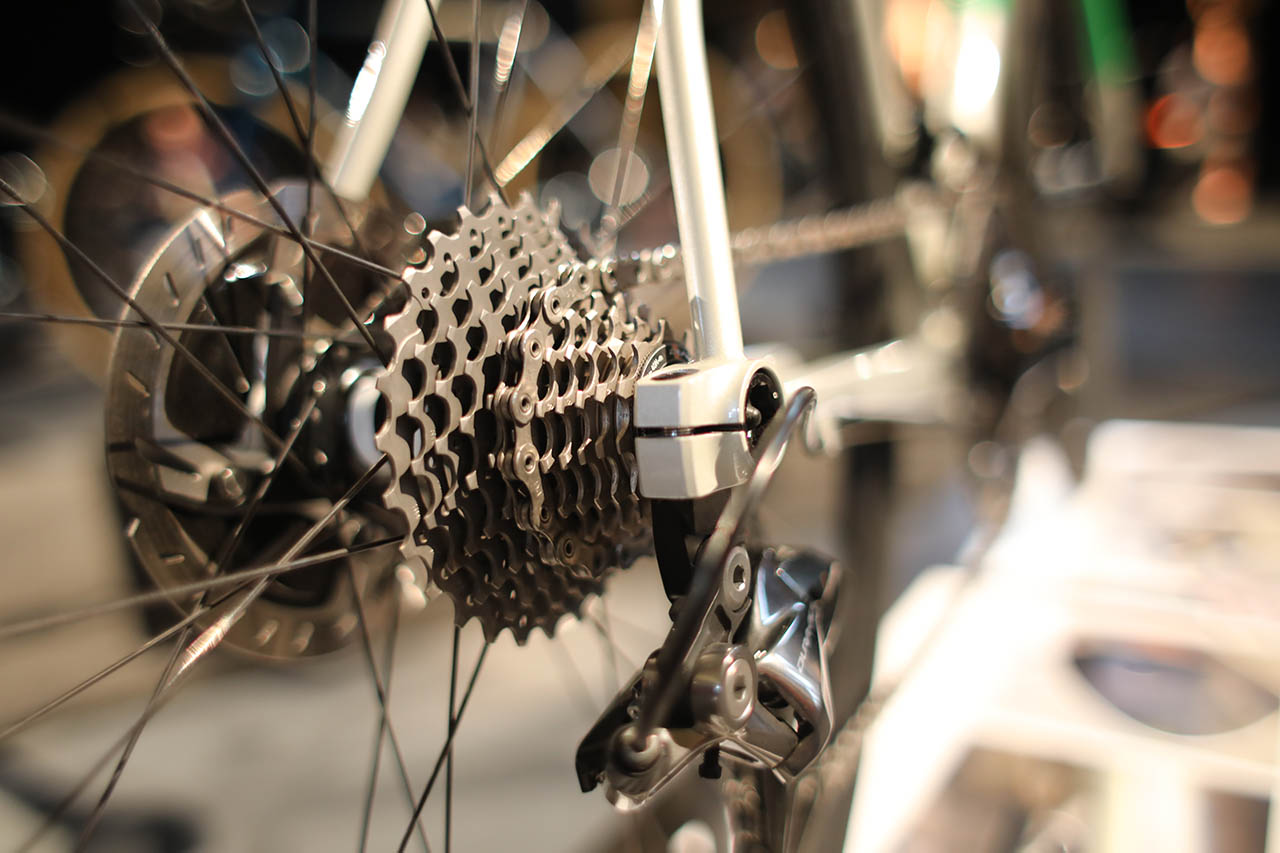 Shimano disc brakes provide ample stopping power, and the problem of untidy cable lines is solved by internal runs that pass through 3-D printed hydraulic cable ports in the downtube and chainstay. The port is Gellie’s in-house design, “I sent it out to be 3-D printed in stainless steel, it gives internal reinforcement.” 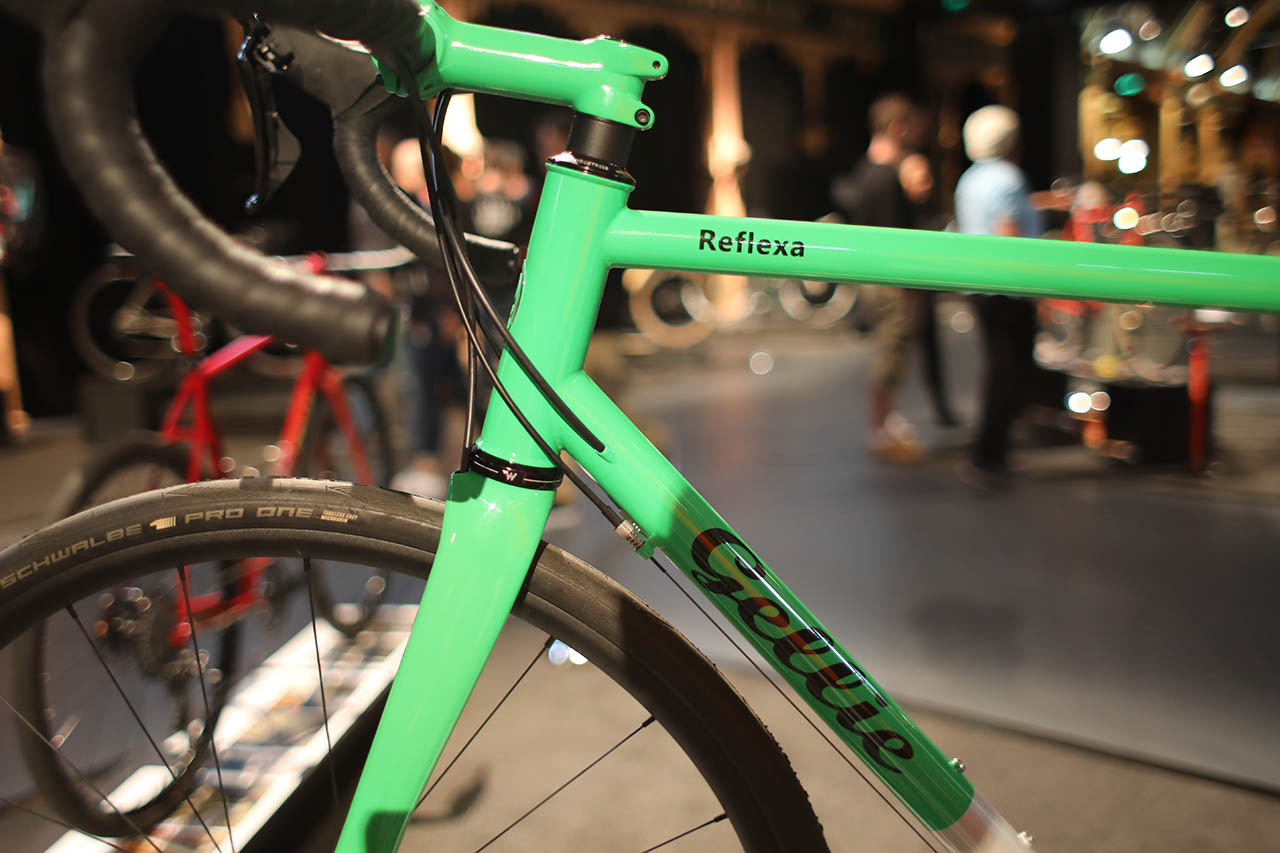 The issue with unreinforced cable ports is the tube can potentially crack at the port hole. A common reinforcement method is brazing a diamond-shaped piece onto the tube’s exterior. Gellie’s internal reinforcement is a neat alternative. “I’m proud about that because there’s a lot of work in it.” 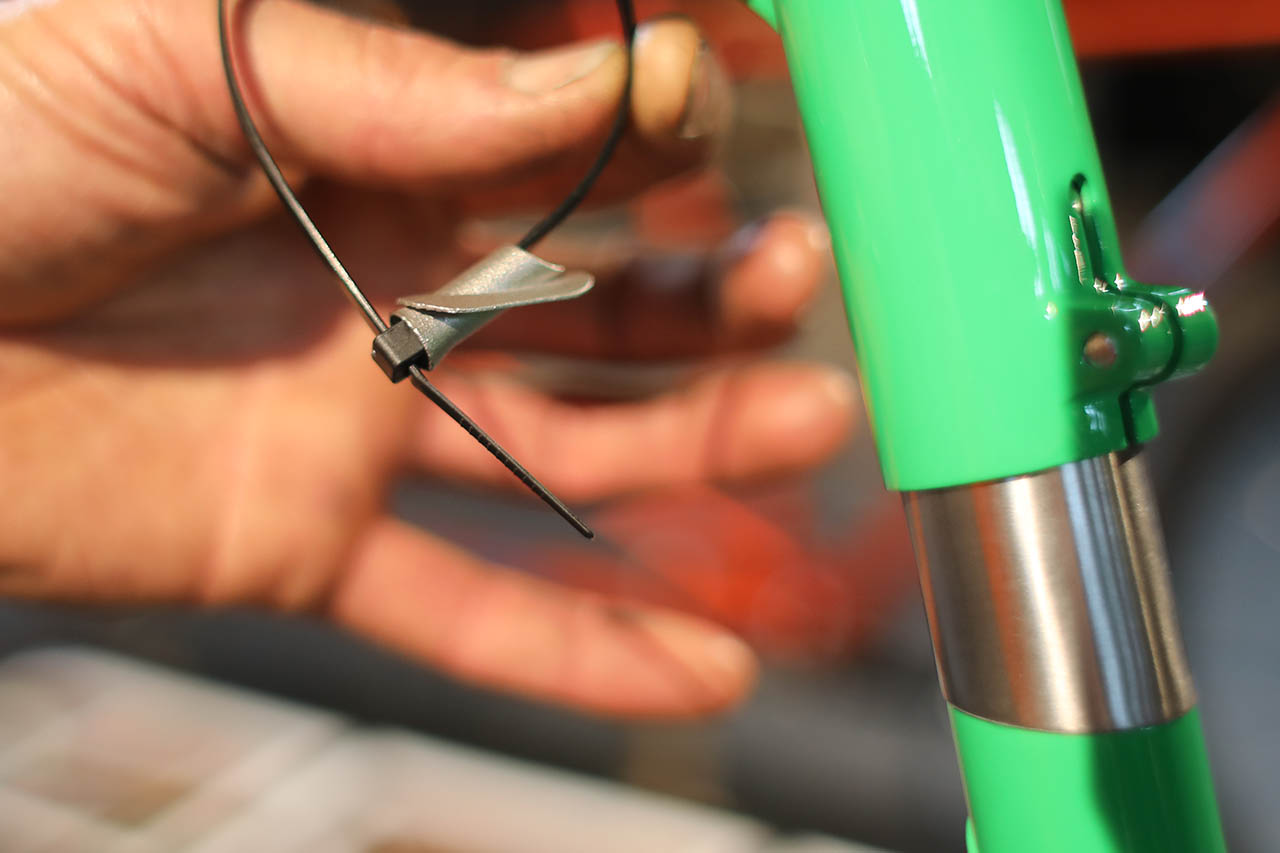 The seat tube mast is butted. “Some people have done it out of plain gauge, but it didn’t meet my criteria for durability. Particularly at the top tube junction it needs to be stronger,” he says. 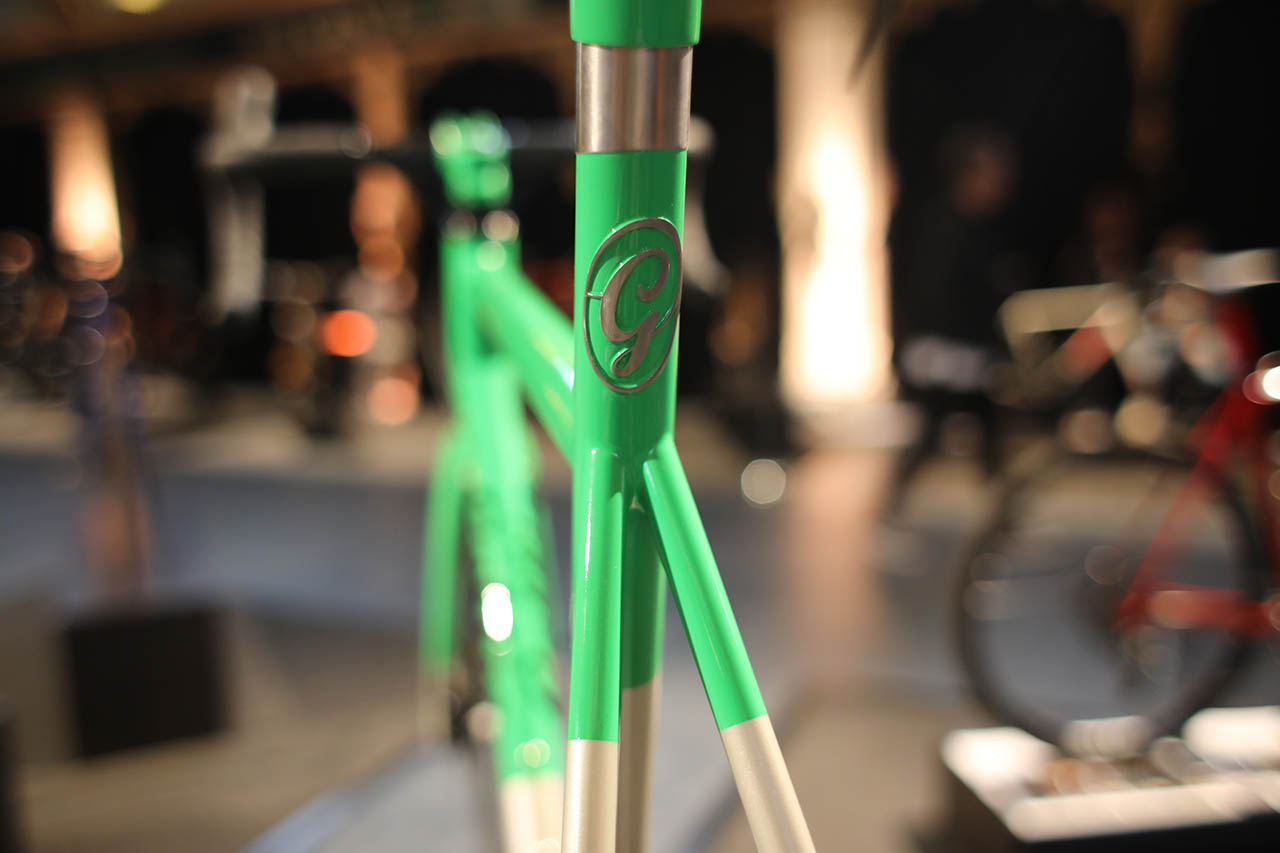 At the junction of the seat stays, the butted tube is about twice as thick as at its thinnest section.