A very special custom-built bike has been ridden by Jerry Haussler since it was built in the 1970s, and was recently displayed at Eroica California. 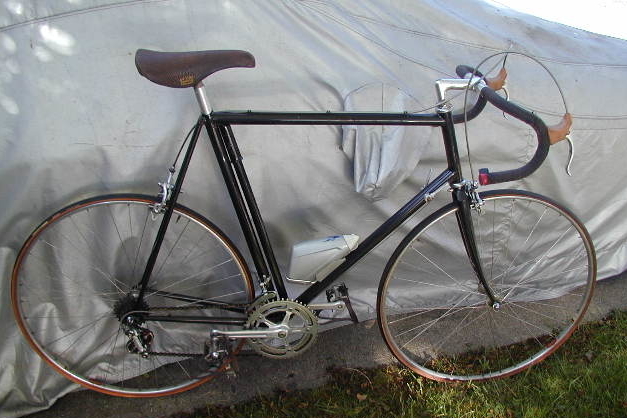 Jerry Haussler wasn’t necessarily looking for a made to measure frame, but he stumbled into one.

Hugh Enochs became a well-known shop mechanic in Northern California, following a racing stint in Europe during the 1960s, trying to transition from being a promising amateur to a professional. Hugh worked at institutions such as Velo Sport in Berkeley, among others. Hugh wasn’t doing a lot of frame building, but was performing a lot of crash repair on frames, having subleased space from an early Wheelsmith location. He also taught bicycle repair classes at a local vocational school, which included wheel building; Jerry Haussler attended some of these sessions.

One day Jerry saw Hugh finish filing a very elegant frame (the seat binder bolt was almost invisible) that was made for high level racer Matt Christie, and he fell in love. Jerry decided he was ready to upgrade from his Follis into something that was one-of-a-kind, and to a brand that he wouldn’t see anyone else riding. More importantly, he wanted a bike that would perform exceptionally well in criteriums.

After an in-person interview, an order was placed for a frame that featured “sprightly geometry” (at least for the time); parallel 73 degree angles with a high bottom bracket. Tubing was selected to make this frame especially stiff. The fork is rather typical; it uses Columbus blades with a Cinelli sloping crown. Things get interesting with the frame itself. While it has a traditional Reynolds 531 seat tube, it used another 531 seat tube as the top tube. The head and down tubes are oversized (1 ¼”) 4130; Jerry doesn’t recall the brand. Most unusual was Hugh’s decision to further stiffen the rear triangle by using non-raked fork blades instead of traditional chainstays; these stays are so short, removing the rear wheel with the tire inflated is essentially impossible.

The frame is fillet brazed, and the seat cluster was inspired by Cinelli’s fastback design. Jerry recalls Hugh saying something about the bottom bracket shell being made by Phil Wood, but it is long enough ago, that his memory isn’t clear, and it was an unimportant (to him) detail at the time. The oversized downtube caused some clearance issues, so the seat tube had to be ovalized at the bottom bracket shell. Jerry thought he ordered the bike with full braze-ons, and had even purchased a braze-on front derailleur, but the frame was delivered without the front derailleur tab; that was the only misstep in the process.  The metallic flake Imron-painted frameset cost $275; there were upcharges for the braze-ons netting a final price of $319.64, which included a Silca Impero pump, painted to match.

The parts are typical of the era: period correct Campagnolo Super Record, but this wasn’t the original build. Originally the bike was mostly Campy Nuovo Record, with the parts being sourced from a “donor bike”, a used 1972 Bottecchia. The original bottom bracket was a Stronglight cartridge type with a titanium spindle. The NR parts were swapped to another project, where they were more appropriate.

Jerry has loved this bike since the day he took delivery, which was approximately a month after placing the order.  Jerry describes it as a quantum leap up from his Follis: it was his primary bike for 12 – 15 years. The only downside is that it is so stiff that it isn’t well suited for rides over 50 miles in length. And true to his wishes, he only has seen 2 Jevelots; his and Matt Christie’s.

Jerry didn’t ride this magnificent machine at Eroica California, but he did have it on display at Saturday’s Concours d’Elegance..