Bikes of Eroica California: Jim Merz - the art of recycling

Veteran frame builder and bicycle designer Jim Merz brought a bike to Eroica California that is literally an amalgam of tubes, lugs, components and design ethics from across his forty years in the bicycle business. 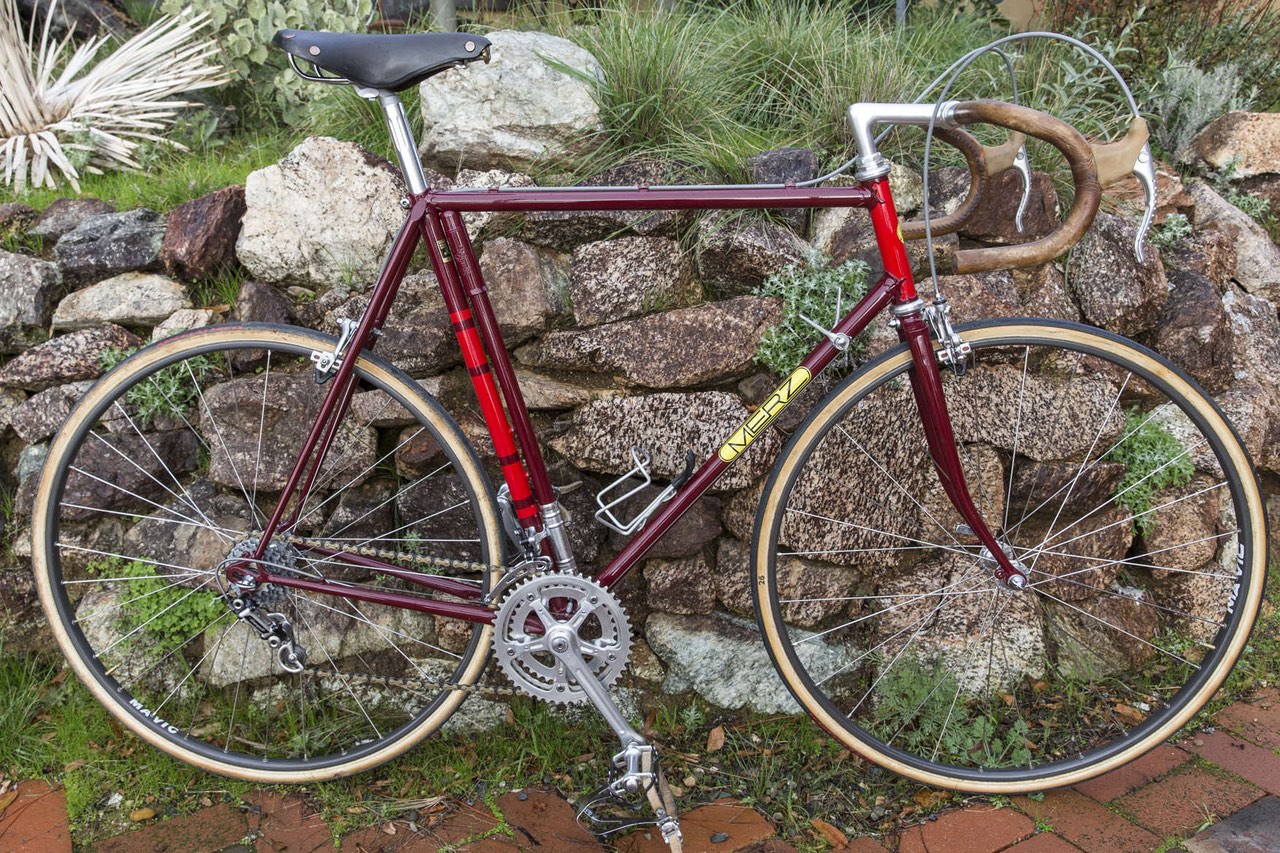 Jim Merz brought a bike with a highly unusual history to ride at Eroica California.

Merz was a frame builder in Portland, Oregon, from 1973 until 1982, selling frames and bicycles under his own marque (Merz), before he shut down his shop and went to work for Specialized as a bike designer. Jim’s path to building frames isn’t the typical story of someone who apprenticed under a master, and branched out on his own. Starting out as a machinist, he gradually taught himself the craft of frame building and became the first American frame builder certified to braze with Reynolds 753.

The bike that Merz brought to Eroica is one of his earliest frames, built as a utilitarian everyday bike. Merz said that in the early 1970s, high quality frame building components were hard to source in the USA. However, he carried out warranty repairs for Raleigh on a contract basis, which left him with residual parts from broken frames.

He recycled some of these parts when building the frame of his Eroica bike. The Nervex lugs, bottom bracket shell and Campagnolo dropouts were sourced from one frame he took apart, while the Reynolds tubing came from another. So all of the frame components had already been used in other bikes before he built this frame!

Merz isn’t a fan of using cast lugs, claiming that they are hard to file, so this Nervex-lugged frame is unusual as one of his own creations. The fork is not original to the frameset either: this one was made around 1981, from scratch.

While the frame components are Raleigh sourced, the frame design itself reflects classic continental European stage race geometry: parallel 73 degree angles with a lower bottom bracket height than the Raleighs he used to repair. Asked about the inspiration for the design, Merz mentioned that he preferred the geometry and styling of Cinelli and Masi frames over typical English designs.

Merz used the bike for several years before selling it to a customer, but ultimately bought it back seven or eight years ago. Upon bringing the bike back into his fold, he commissioned Ed Litton to repaint and re-decal the frame, and he rebuilt it with vintage Campagnolo Record Components.

When Merz heard of Eroica California, he decided to give the bike a facelift of sorts and re-equipped it with period-correct Campagnolo Super Record components, along with a Campagnolo triple crankset to help tackle the tough coastal climbs around Paso Robles. While Merz would often “triple-ize” double cranks during his frame building days (he was renowned for touring bikes), this is an out-of-the factory Campagnolo triple with unusual 175mm arms. Merz states that he has only seen two pairs of factory-made 175 triples, and he owns both of them!

Other unusual components on the bike, aside from the triple chainrings, are the Campagnolo aluminum 6-speed freewheel (26t largest cog) and a set of 26mm Specialized tubular tires that he sourced from one of his former colleagues at Specialized. These tires are not available to the public, but are provided by Specialized to their sponsored professional race teams. Not satisfied with how the Campagnolo brakes performed on his hard anodized Mavic SSC rims, Merz changed the brake pads to current production Kool Stop salmon pads, and prepared those to bite to his satisfaction.

Merz lost much of his collection to a wildfire that claimed his home a number of years ago, and he has been restoring a few different bikes as of late. His guiding philosophy in rebuilding his collection is to make the bikes as period-correct and original as possible, although if a project is meant more for frequent riding than showcasing, he will relax his standards.

With artisans like Jim Merz around, bicycles really can live forever.