Bespoked is an international event with a distinctive British atmosphere. Anna Schwinn gives her impressions and finds some frame building gems on the floor of Europe's major artisan bicycle show.

Bespoked is set in the passenger shed of Brunel’s Old Train Station in Bristol, UK,one of the world’s oldest functioning train stations. The arched ceilings and skylights make the space a pleasant departure from the more sterile environment typical of most bike show venues. The show holds over 90 exhibitors, mostly from the UK but with several builders from Continental Europe, the US and at least one from as far away as Taiwan. The event boasts attendance of five to six thousand thousand members of the public. On day two of the show, the place is packed.

Compared to NAHBS several weeks ago, Bespoked attracts more traditional-type framebuilders and features a relatively high frequency of lugged or fillet-brazed steel frames and quill stems. At show close, there will be a more formal discussion of the differences between building communities as observed through these two shows but, for now, here are nine striking things from the initial pass of the show. 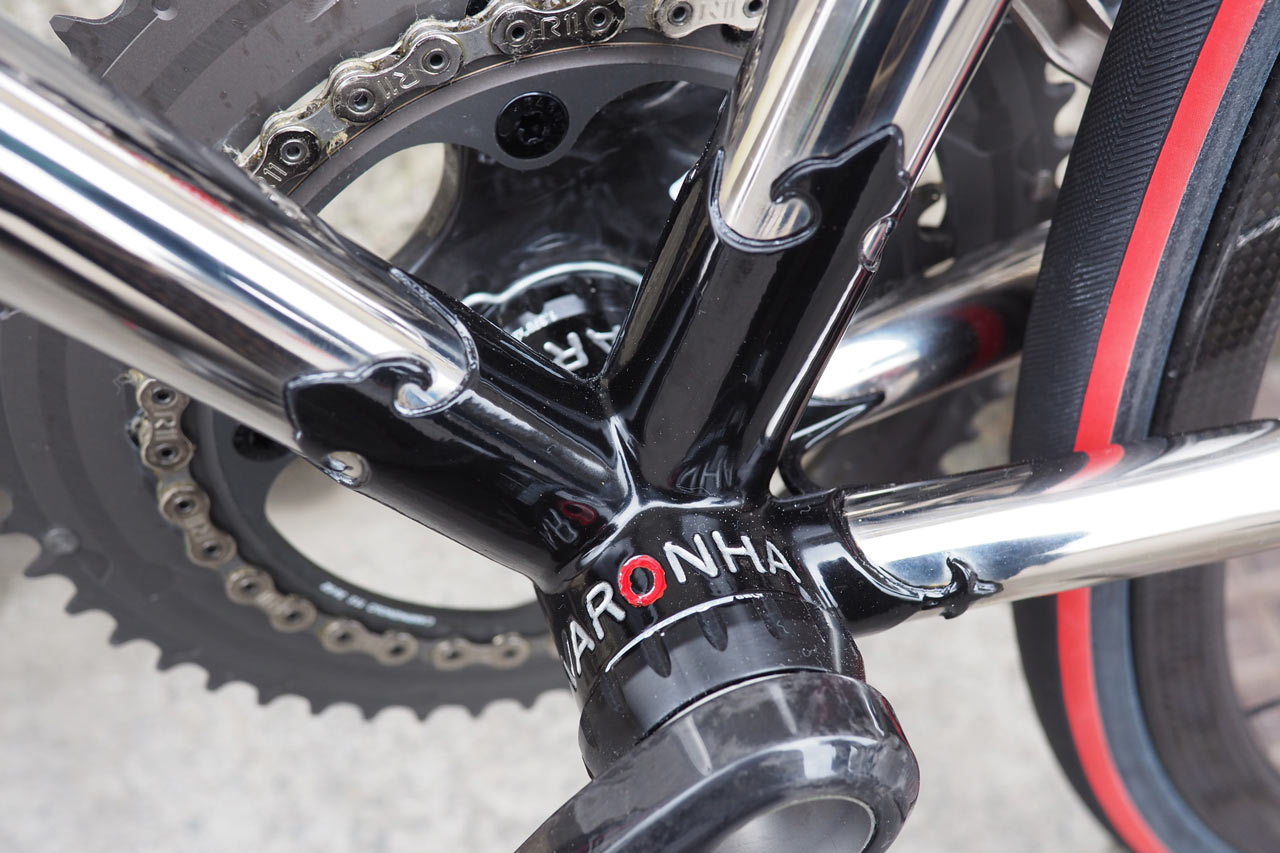 Winston Vaz, having a reputation for the best fillet brazing in England, is probably the most experienced framebuilder at the show with 38 years at the craft. His main show piece, a bike constructed around an ornate set of headtube lugs, is the only inch-steerer, lugged, Campagnolo EPS-integrated Reynolds 953 bike frameset in existence. In order to accomplish this feat, he compelled Reynolds to produce the inch headtube and 28.6mm seat tube specifically for this project. To pull the visual theme of the headtubes through the entire bike, Vaz hand-cut and filed the details from those headtube lugs into sleeves to laminate into the seat cluster and bottom bracket shell. To match the headtube lugs, Vaz hand-filed and laminated the details for the seat cluster and bottom bracket. 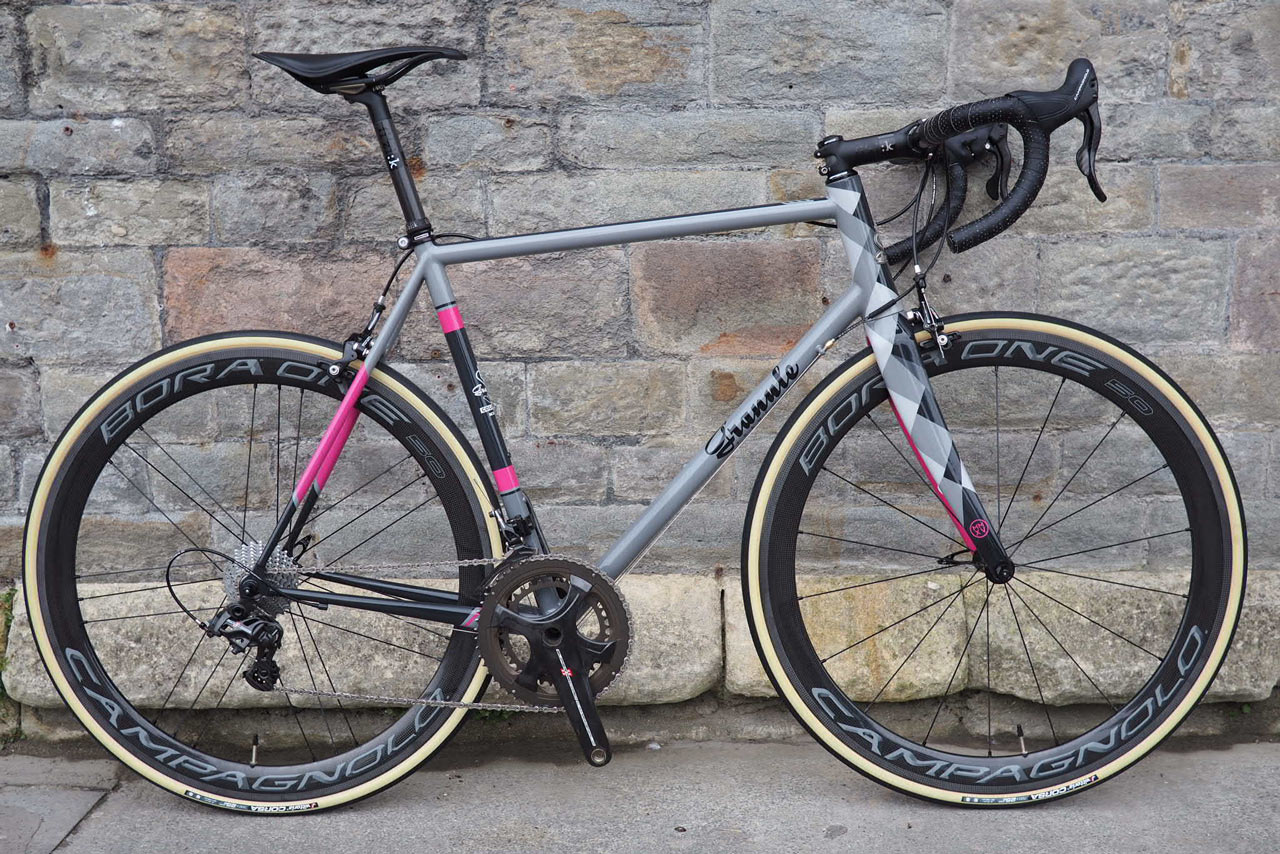 Shaun Wakefield’s bikes stood out for their modern builds as well as their bright and technical visual themes. As first year builder, there is a unique juxtaposition between the clean lines and modern builds of his frames and the older brazed-on lugged dropouts and cable routing. 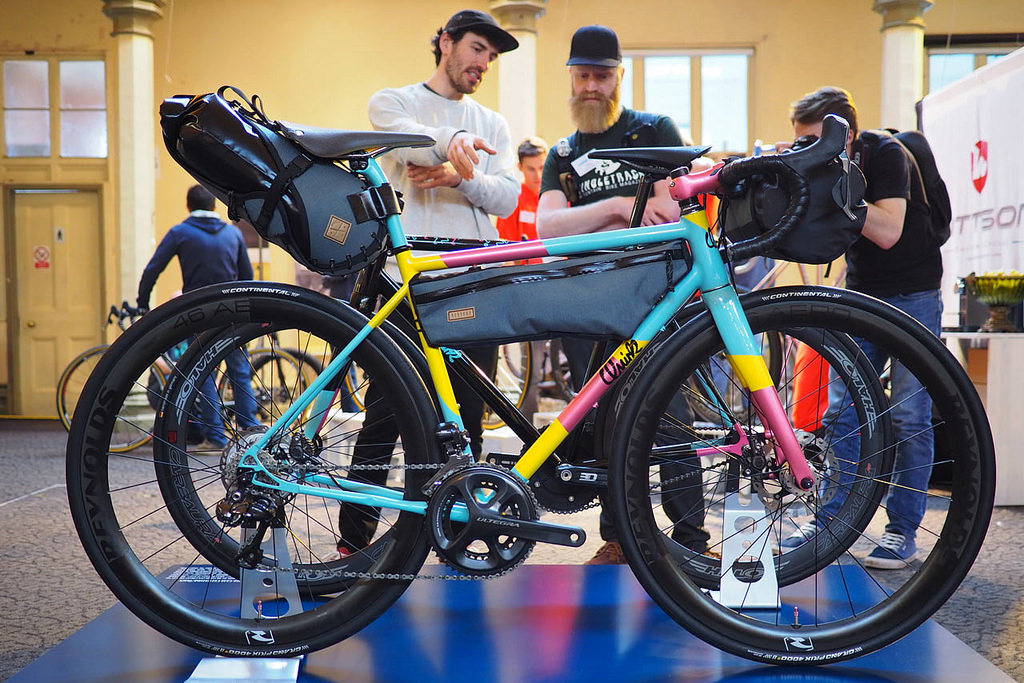 For a builder only in his first year, Rob Quirk’s bikes are impressive not only for their beautiful fillets (easily some of the best at Bespoked this year), but also for their colorful paint schemes. This frame was built for an athlete, Laura Scott, to race the Trans Am in June.

Proving to be a young builder watch, Rob took home three awards on the first day of the show for Outstanding New Framebuilder, Outstanding Design Award, and the Brooks Choice Award. 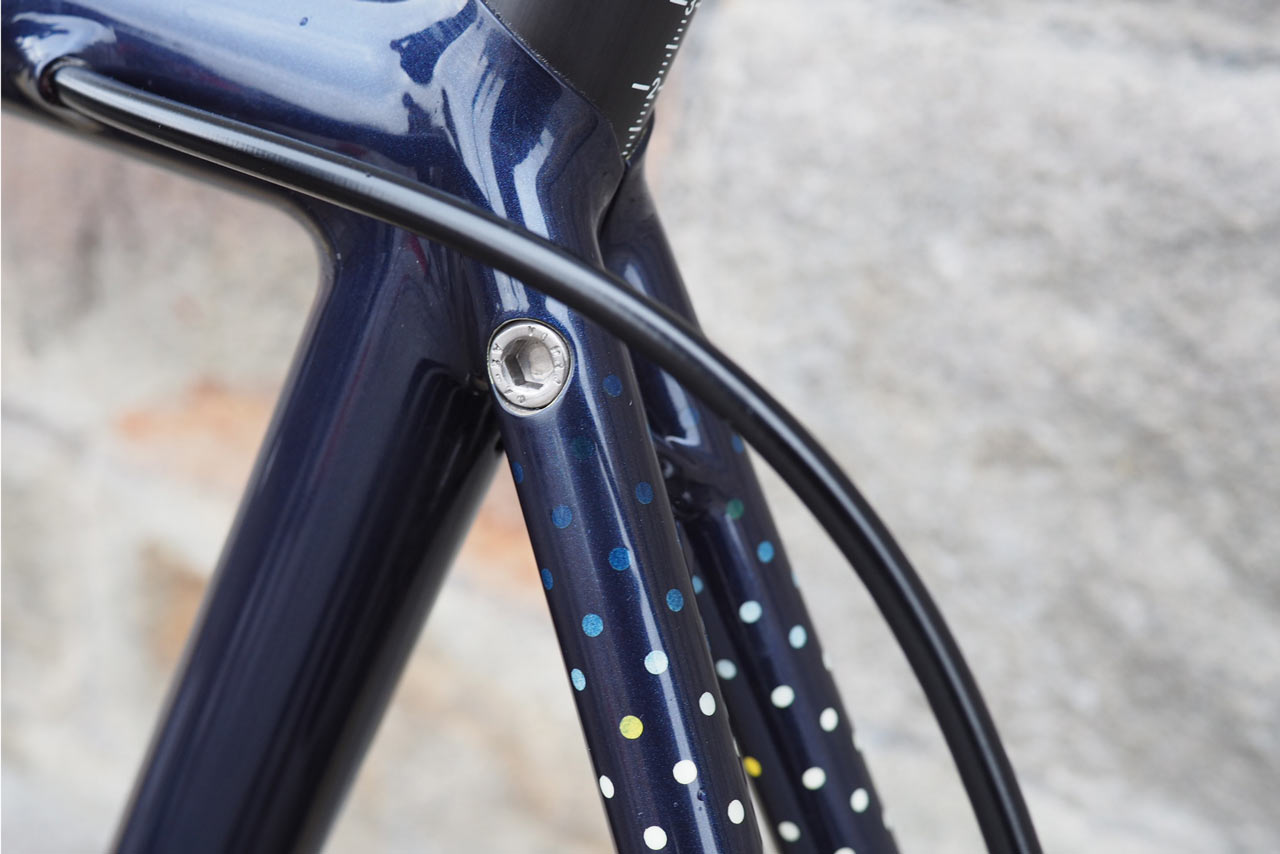 Jake Rusby does not shy away from ambitious processes or detailing as shown by his highly involved silver fillets, slimmed lug points, and self-constructed dropouts. He built this polka dot show bike for himself out of discarded or mis-ordered tubing he had laying around the shop and it has asymmetric features designed to be seen. His unique seat stay binder bolt system is constructed through brazing a solid piece of steel through the seat stays at the cluster, then after the frame is completed, machining the counterbore and threads. 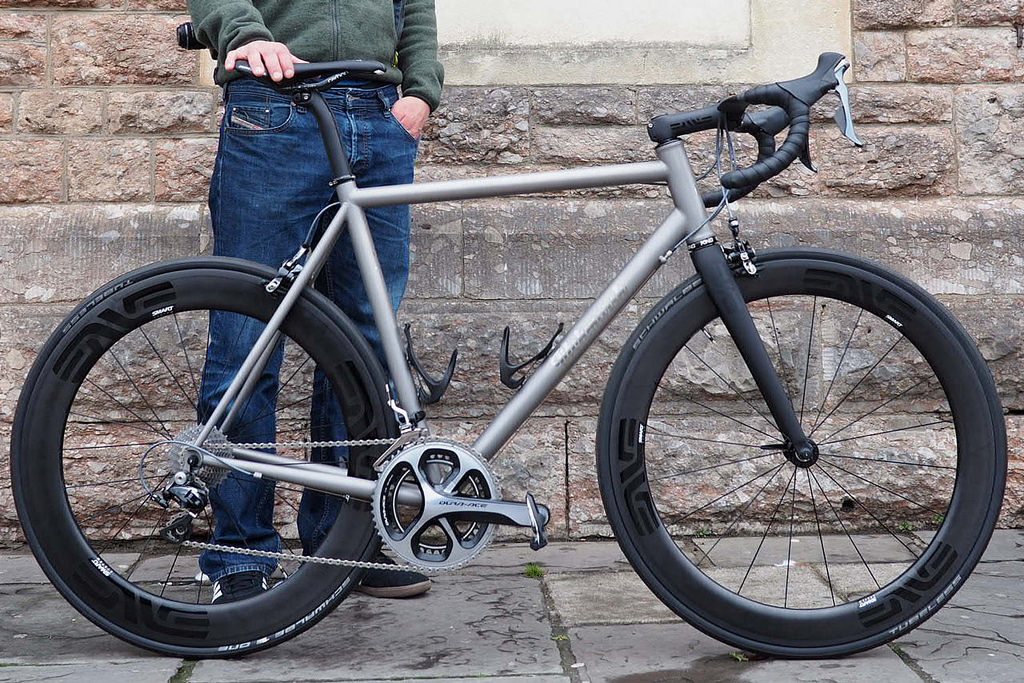 Dan Titchmarsh, a second generation framebuilder out of the York area, has more than once played the role of that man with a single bike in an otherwise empty booth at Bespoked and, more than once, walked away with awards for it. His submission for this year, a clean and understated titanium road bike, is worth a close look for the quality of beads alone. Titchmarsh is able to hold this caliber of weld through the use of a unique holding jig- one that had been a light holder for an operating theater in the 60’s, a large brass fixture that allows him to put his work at angles optimal for low strain. 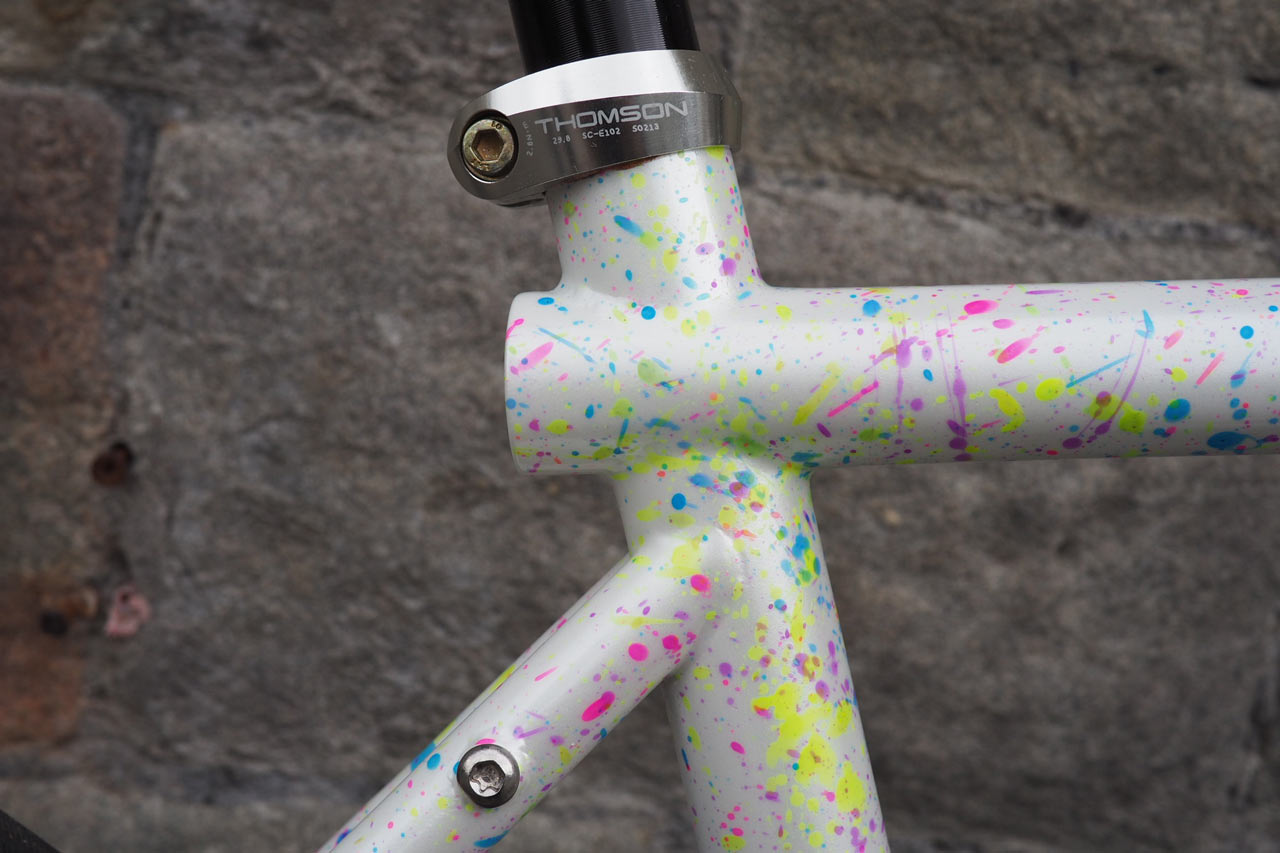 New builder Richard Evanson’s homage to early 90s mountain bikes took home a Brooks Choice award on day one of the show. The do-everything gravel/touring frame bike attracted fans of that genre with a fine rainbow splatter over a pearlescent white base. He drives this throw-back theme home with his unique seat cluster, where the seat tube pierces the top tube at the joint. 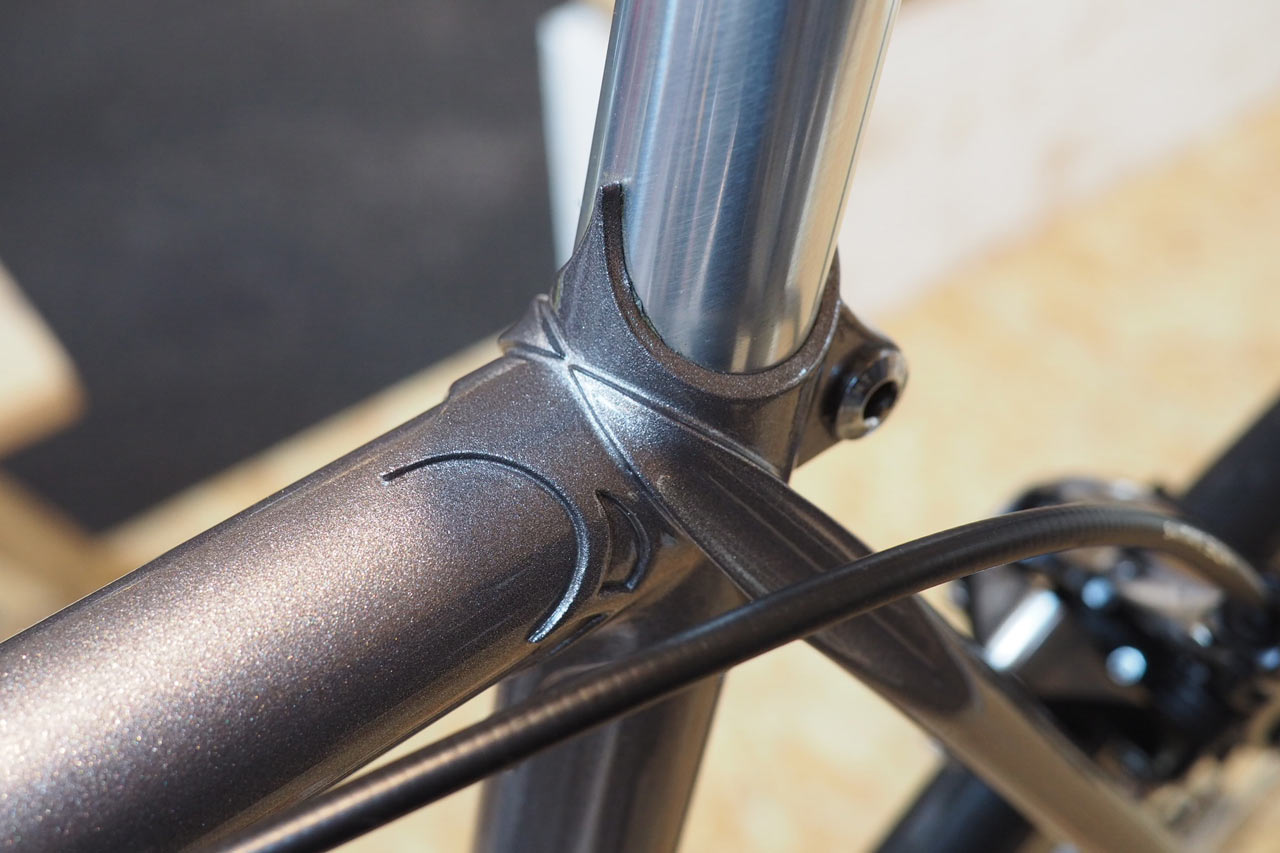 The centerpiece to Ashley Malcolm’s booth is a tribute to his mentor, the late Ron Cooper. The frame features Cooper’s trademark stay caps, striking in their high caliber of alignment as well as top tube internal routing. The overall build features a technically impressive tied and soldered wheelset, complete with bladed HOSHI hooked spokes and Dura Ace hubs- a nod to Malcolm’s own track champion past. 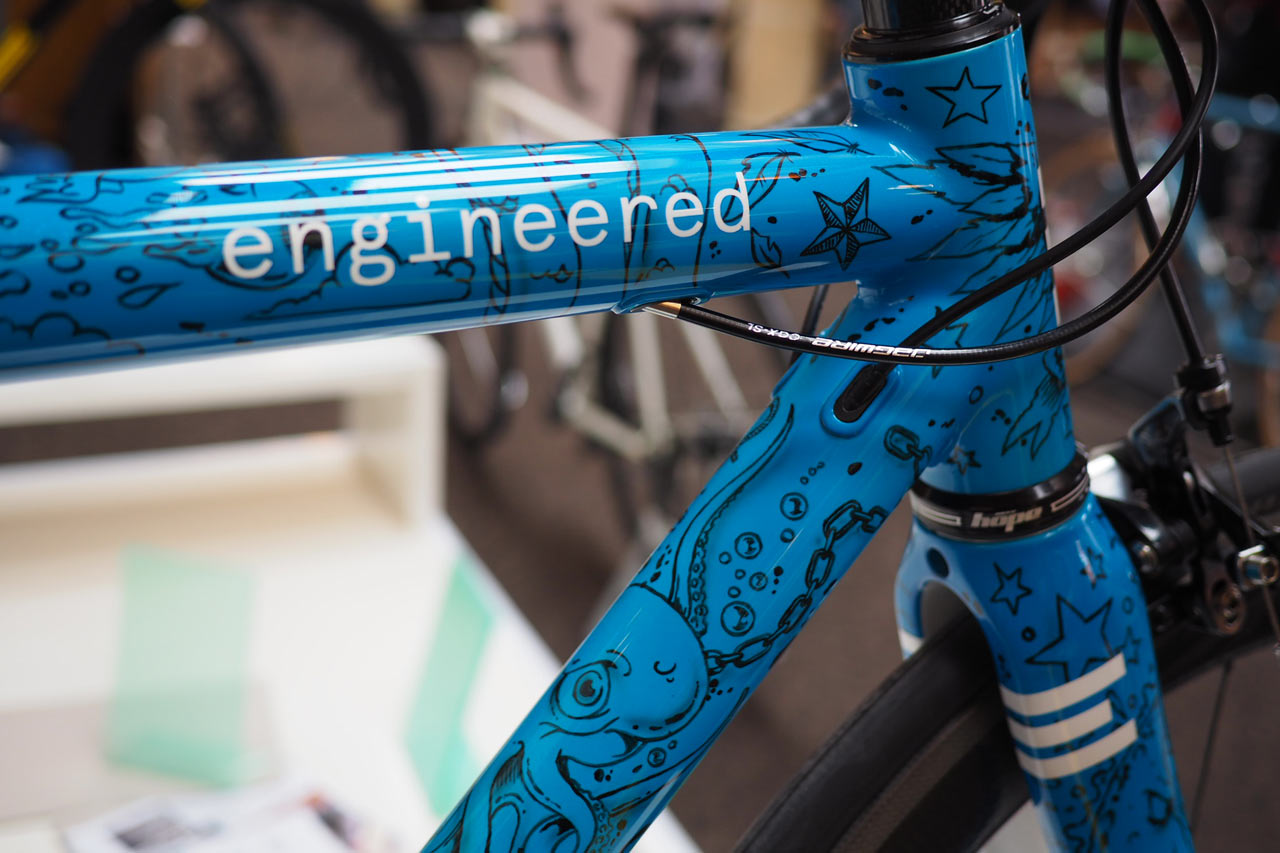 Engineered Bicycles, a firm out of Bristol, brought this totally hand-painted and airbrushed fillet brazed frame. The paint, which covers every surface of the frame, includes themes of surfing, rockets and flaming skulls- all of which would be completely at home on the flash wall of a tattoo parlor. The frames are designed by Engineered BIcycles and made at several facilities around England. 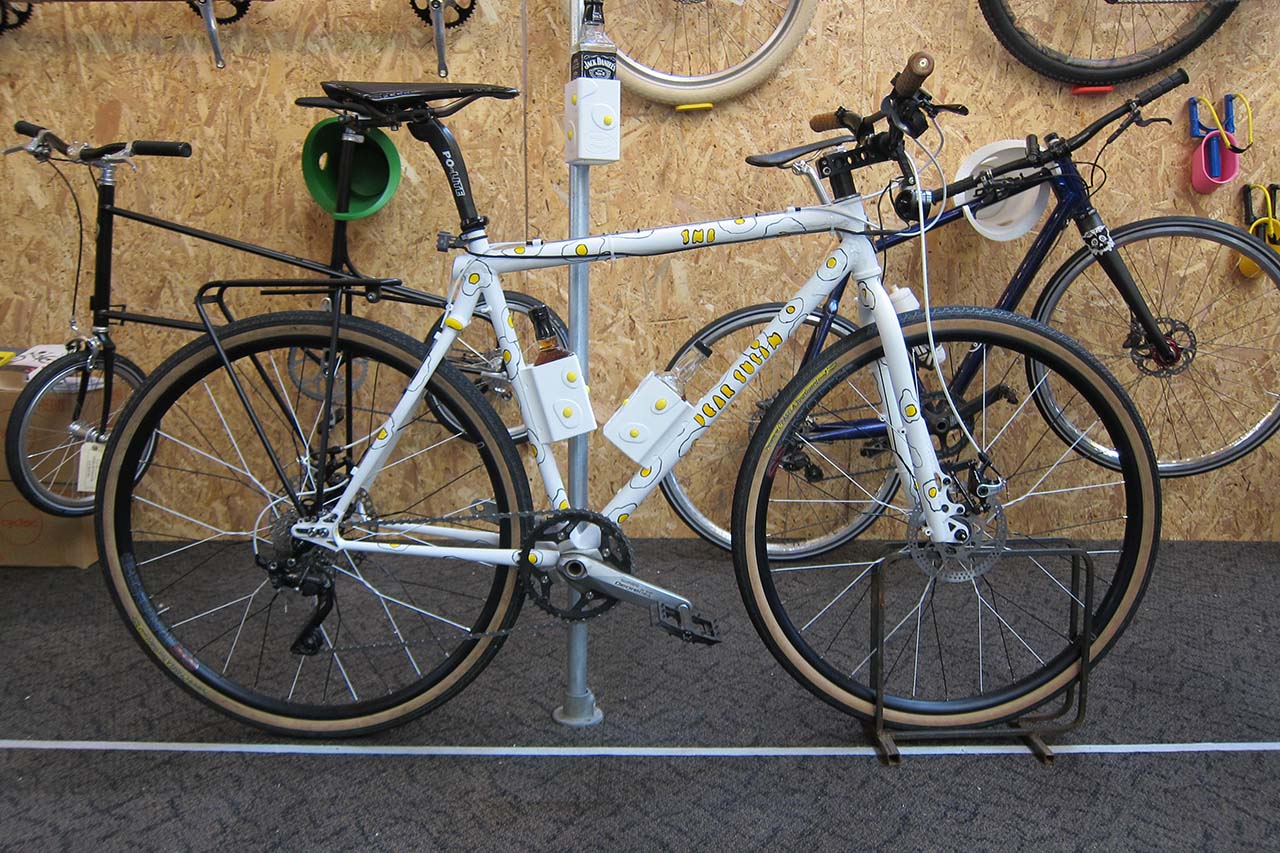 The Whole Dear Susan booth is not something to miss. Each bike in the booth on its own is striking in technical or thematic achievement. With 3D-printed whiskey holders (in pictured bike), a triple-to-double coupled tandem, a tall bike, and Pacenti fork crown slingshots everywhere, the booth as a collection is confusing and offensive within the context of an otherwise conservative show. To cap it off, builder Petor Georgallou distributed hardboiled eggs from a bucket throughout the show.