Anna Schwinn gives us her impressions from the final day on the show floor at Bespoked 2016. 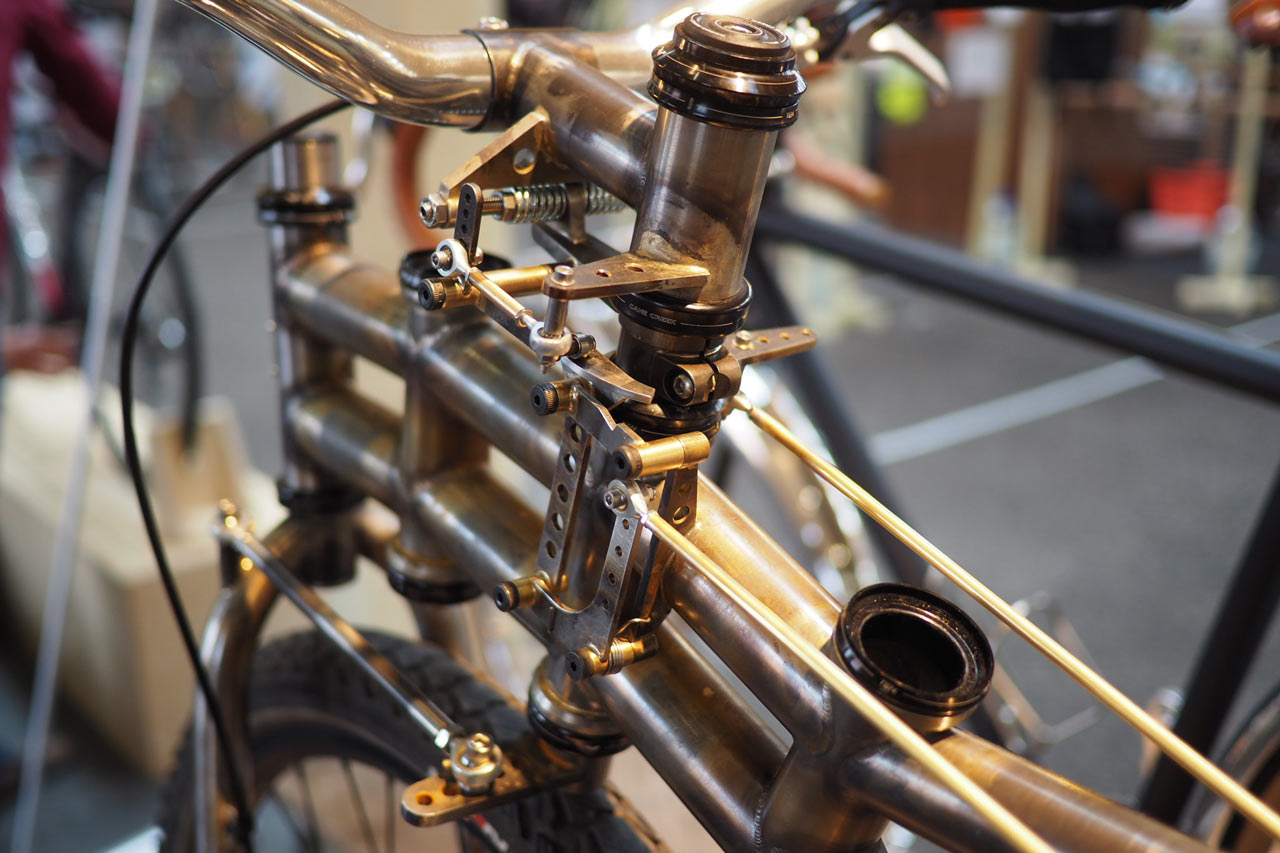 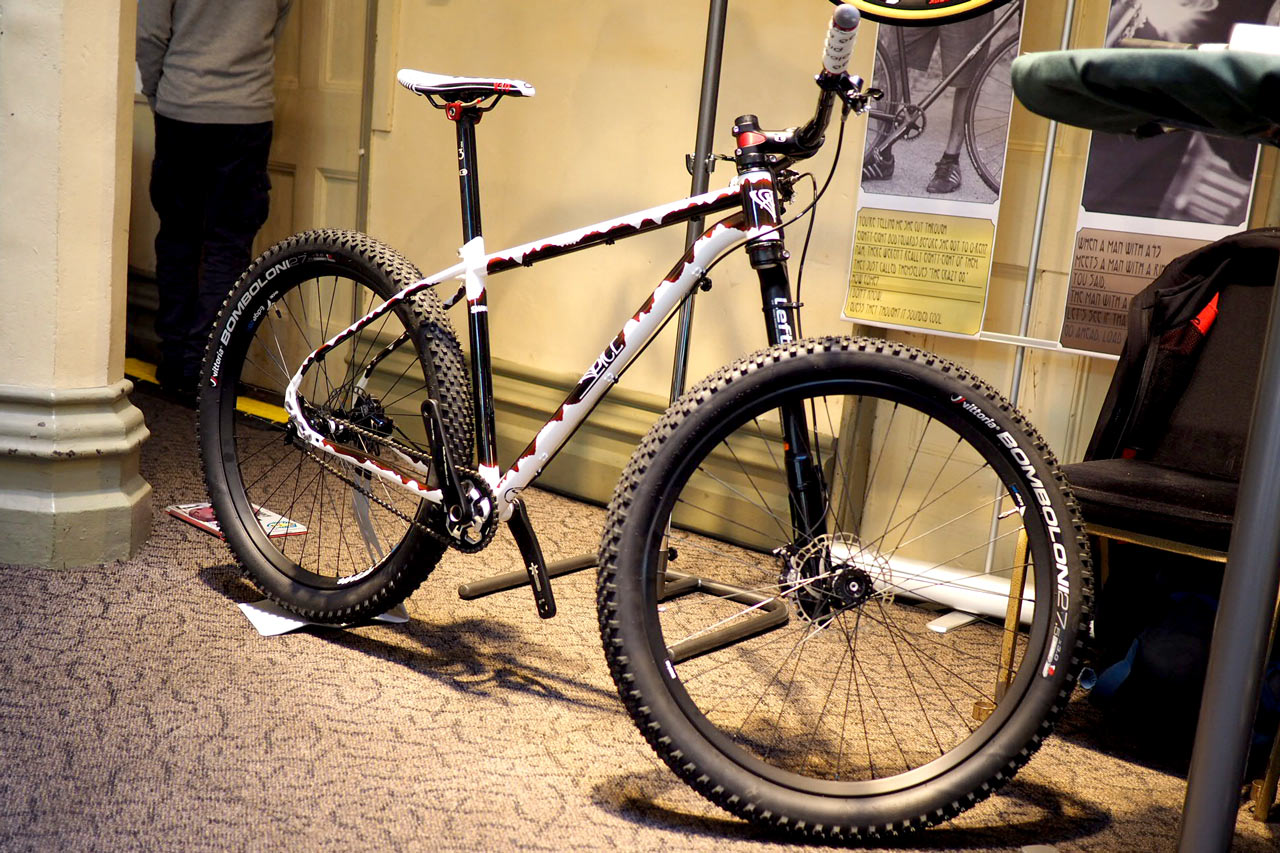 Dario Columbo had several pretty interesting things going on with the bikes he had at his booth at Bespoked. For one, the road bike he had on display had Columbus MAX mountain chainstays from the 1990s. As it turns out, Columbo has a stock of them he purchased on closeout. For another, Columbo created his own sliding dropout body designs to interface with existing Paragon plates to accomplish the handling geometry ranges he wants to see in the world.

For his mountain bike, Columbo used his dropout design to allow for transitioning between 27.5+ and 29+ wheel/tire system configurations while maintaining a tight rear center and tire clearance for each.

As a side note: Bice Bicycles won my personal award for best cable guides. 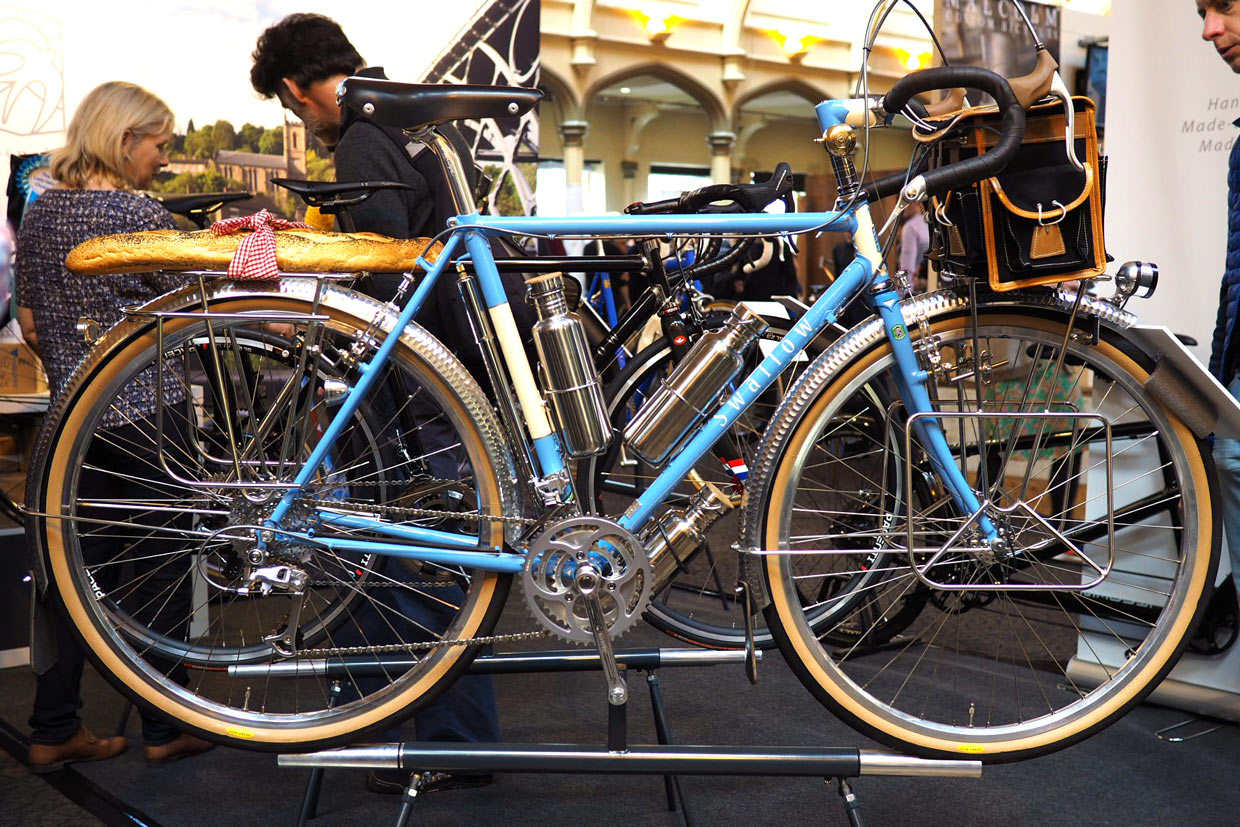 Builders Peter Bird and Robert Wade have been collaborating since the early eighties with a range of products, including classic steel and more modern tandems. While the brand took home one of the Lady Velo awards for a women’s bike, the show stopper was this light blue randonneur frame. The goal of the project was to design a bike with a modern ride that could easily be mistaken for a “period piece.” The fully stainless steel Reynolds 953 frame is outfitted with stainless racks and components for their durability and archival quality. Baguette not included with purchase. 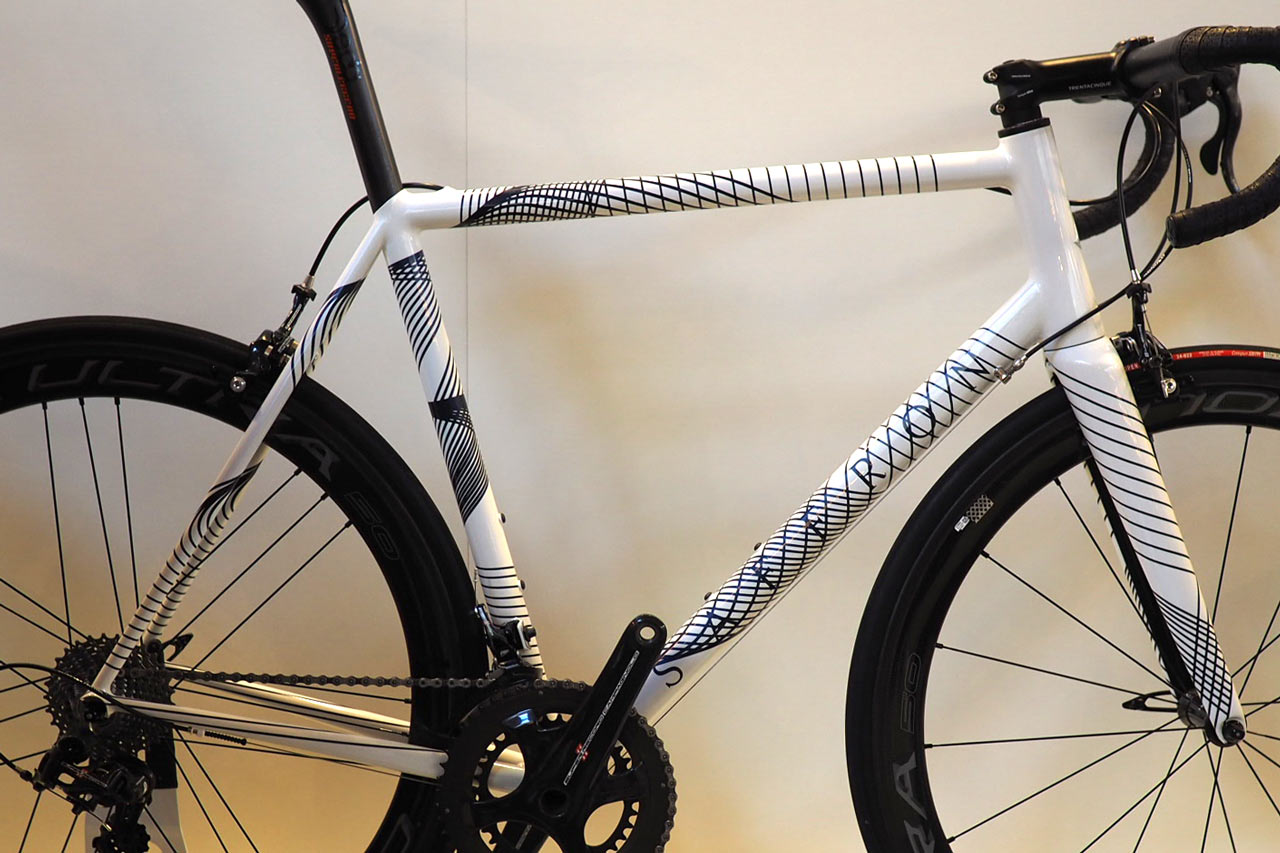 For this year’s Bespoked, Matt Sowter built a personal bike visually themed after the work of his favorite tattoo artist, DotsToLines. It's appropriate because Sowter came into framebuilding much in the same way the Israeli artist dropped everything to explore tattooing as a medium. The oversized Columbus Spirit tubing serves as an expansive canvas for the metallic navy blue curvilinear pattern stenciled onto the whole exterior surface. Sowter chose a beefy Columbus tapered headtube for the large diameter accompanying headset bearings, as well as robust Breezer-style dropouts and oversized tubing to work with his proportionally tall human build. 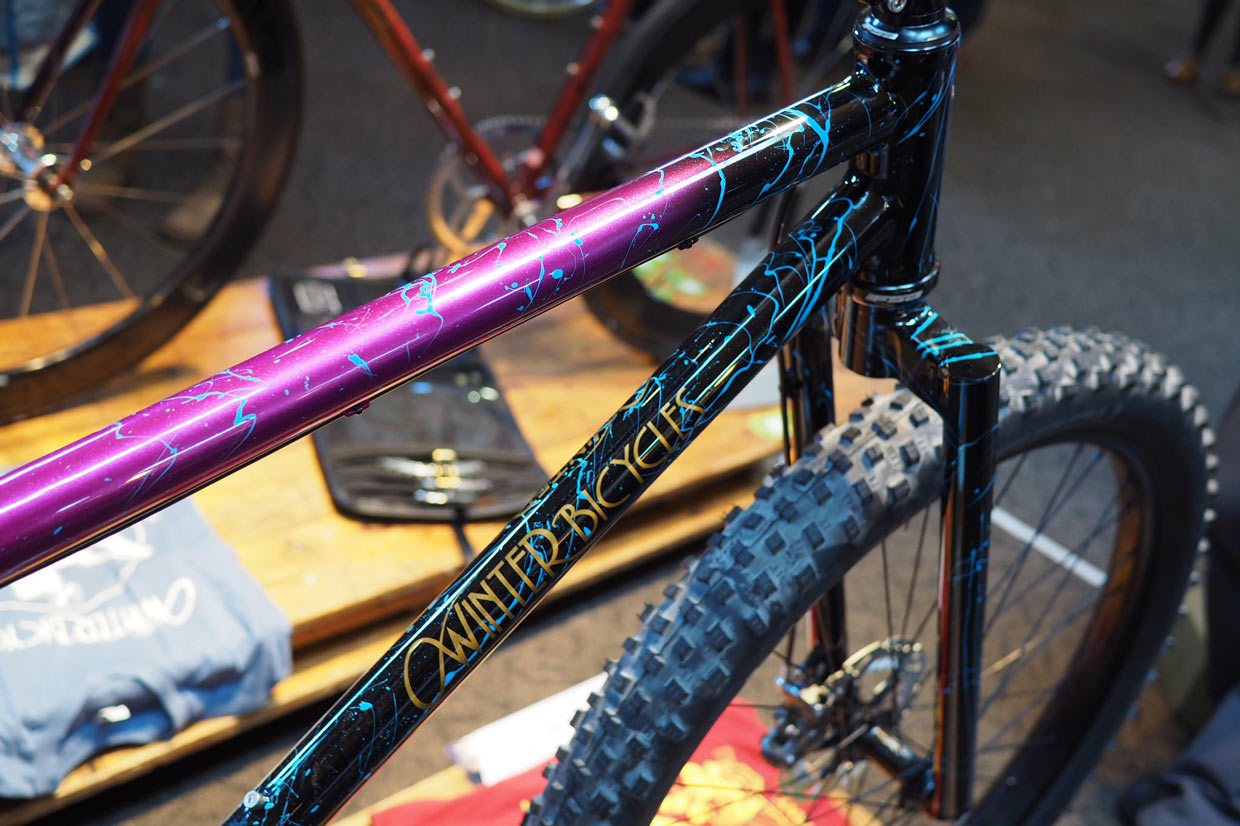 Eric Estlund was one of two American builders featured at the show, but the only one displaying independently. Before breaking out on his own eight years ago, he started his career brazing on the production line at Bike Friday in Oregon where he estimates he made in the neighborhood of 3000 frames.

This 27.5+ frameset was constructed for himself, having just moved to Pennsylvania where he found himself in need of a bike that could rip on both the fast and tight technical trails of his new home. His fork is corrected around 140mm of travel and features his characteristic box crown. While the frameset has clearance for up to 3.5 inch tires, it is otherwise a nod to Grove Innovations, pioneers in 80s and 90s mountain bike technology. The seat tube is a Tange Prestige tube designed for mountain bikes that Eric has been holding onto for years. The paint, which Eric does himself, is a two color fade with splatter reminiscent of the era. 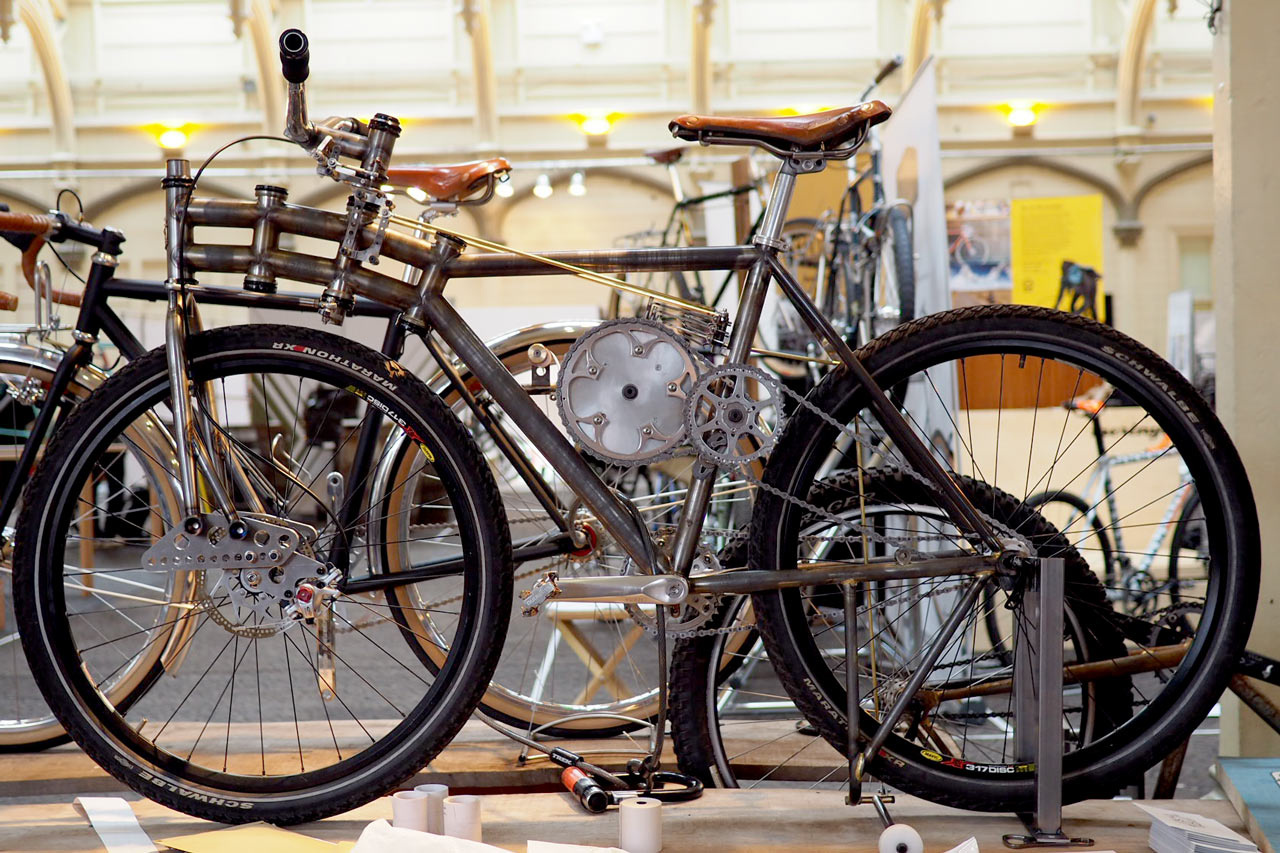 Robin Mather, after 23 years of building frames, found himself dissatisfied with his lack of viceral understanding of handling characteristics. “We design bikes based off of convention... off of fashion. There are mathematical models, but they don’t help me understand handling.”

Mather constructed this frame to help develop his conscious and unconscious understanding of the effects of changing head angles and mechanical trail on steering and handling. The bike features four headtubes and an axle interface to accomplish a variety of handling characteristics, as well as a mechanical readout to document steering versus linear progression of the bike over a given course.

Video: Robin Mather on the design and build, and how he intends to use the bike .