Bespoked is upon us!

Anna Schwinn visited Bespoked for the first time last year and was delighted by many of the bikes she saw there. In a two-part series Anna talks about the companies whose preparations she's been following, going in to the 2017 event. 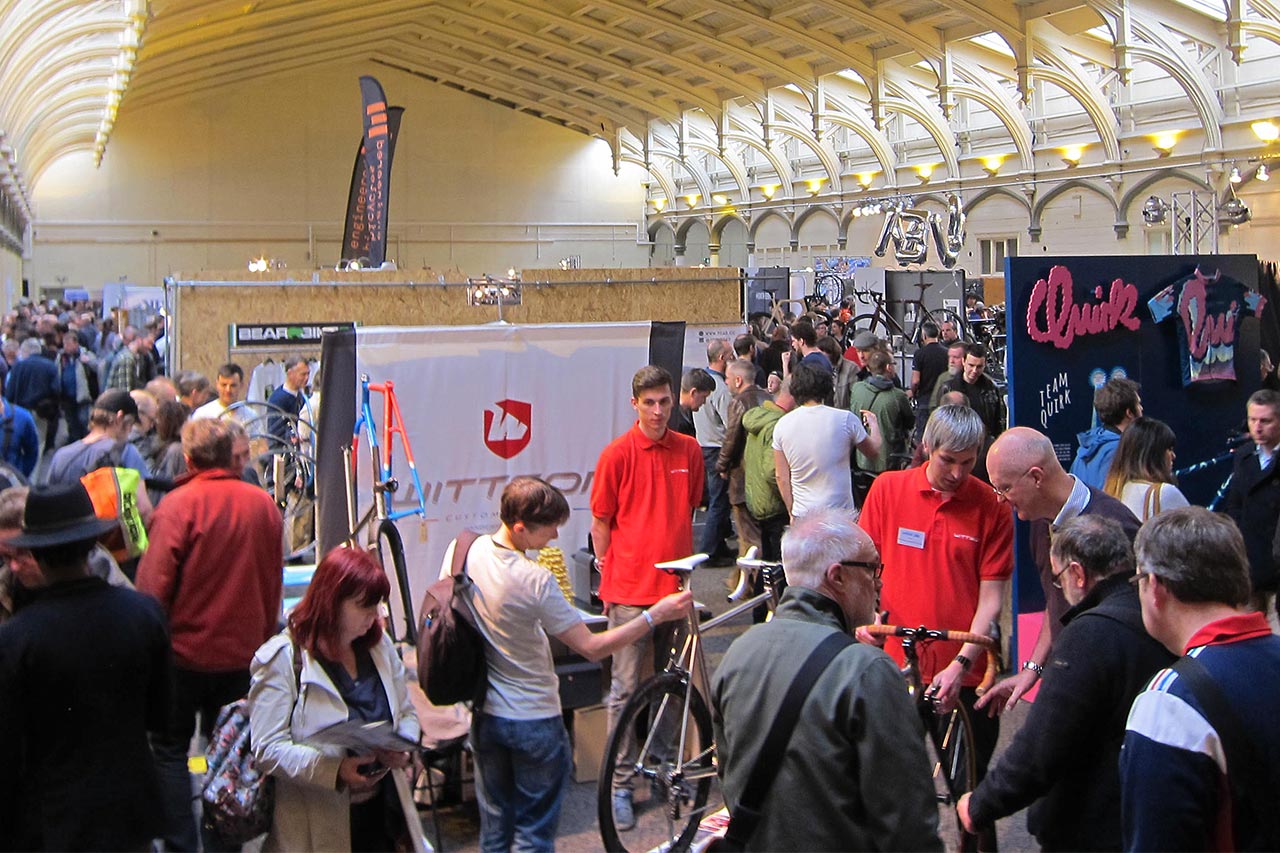 In the year since the 2016 Bespoked, I’ve gotten to know personally and have closely followed many of the talented framebuilders I saw in that beautiful Brunel railway shed in Bristol. Observing the social media accounts of these builders, this year’s Bespoked looks like it's gearing up to be a doozie, with many exhibitors pushing the limits of what the show has seen in previous years.

For weeks I’ve been building a mental list of must-visit booths and bikes in anticipation of the event. Sadly, however, I am unable to attend. Rather than let all this bike-spotting go to waste, I thought I would share my list of anticipated show highlights.

Tom first shared this project with me at the North American Handmade Bike Show 2016 in Sacramento. He had been inspired by the Rossin Olympic pursuit bike. “I loved the concept of it and the look, which is kind of obscene.” While high fashion track bikes of this ilk have been highly popular in the last season or so in the small builder community, Tom went an exciting direction with it. Rather than attempting a faithful recreation of the Rossin pursuit archtype, Warmerdam riffed. “The idea of a webbed frame was stuck in my head but I wanted to do it differently, I wanted to add detail. This was a new canvas for me and I wanted to explore possibilities.” 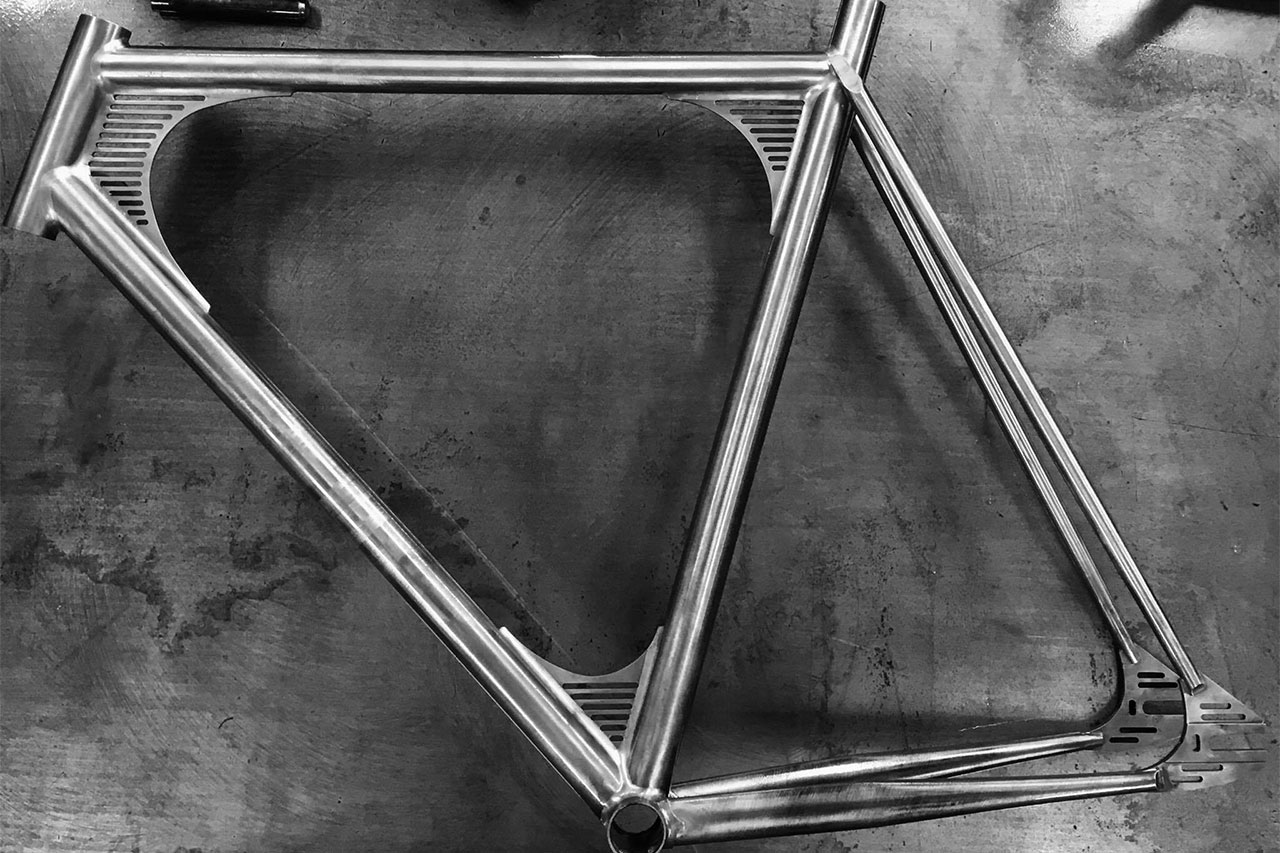 “I wanted something simple and effective, brutally effective.”

The resulting Demonic interpretation is as brutal as it is unique and constructed with the precision in process and attention to detail we’ve come to expect from Warmerdam. The webs are machined with his characteristic slots. Edges are blunt rather than pointed. 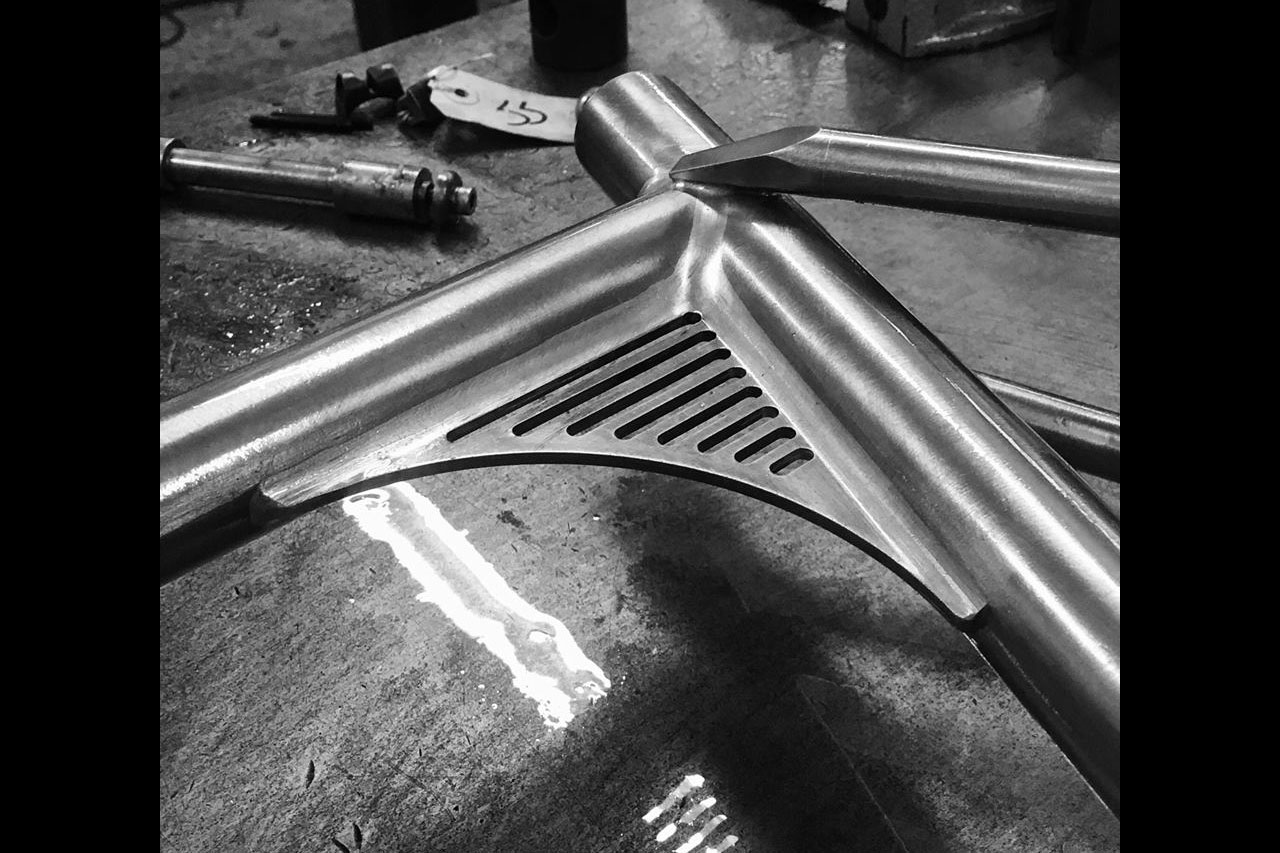 What’s exciting about this particular frame configuration is that Warmerdam does not envision it being a one-off. As with his lug designs, he intends to make this scheme available to consumers for a short period. The plan is to explore this platform for other opportunities for detail in metalwork to highlight the form over the finish, in bridges, dropouts, forks, and stems. And when he feels the next platform coming along, he isn’t afraid to abandon it. This frame is a “test bed” for future directions he intends to explore. “It's really just me as a framebuilder doing whatever the fuck I want. I expect criticism and I like that. I don't want everybody to like it, that would be less cool.”

“I'd rather be a cult framebuilder than some mainstream dickhead business guy.”

The Bespoked show is interesting to me because it is a show that prominently features fresh talent, sometimes less than a year into the craft. This has caused controversy within the UK builder community between the new and old guard. The fresh faces, many trained through The Bicycle Academy, have already made their mark in shaking up the local landscape against a backdrop of expanding consumer embrace of small builders in Britain.

One such newcomer is Adeline O’Moreau, who abandoned her day job in advertising to pursue her passion of bicycles. With an emphasis on cyclocross frames (which are clearly being tested hard in their first season on the circuit) her bikes are designed with a highly functional and clean formal aesthetic. But don’t let that deceive you, in addition to pursuing an individualized ride and fit, O’Moreau offers a highly personalized finishing and branding experience to her customers. 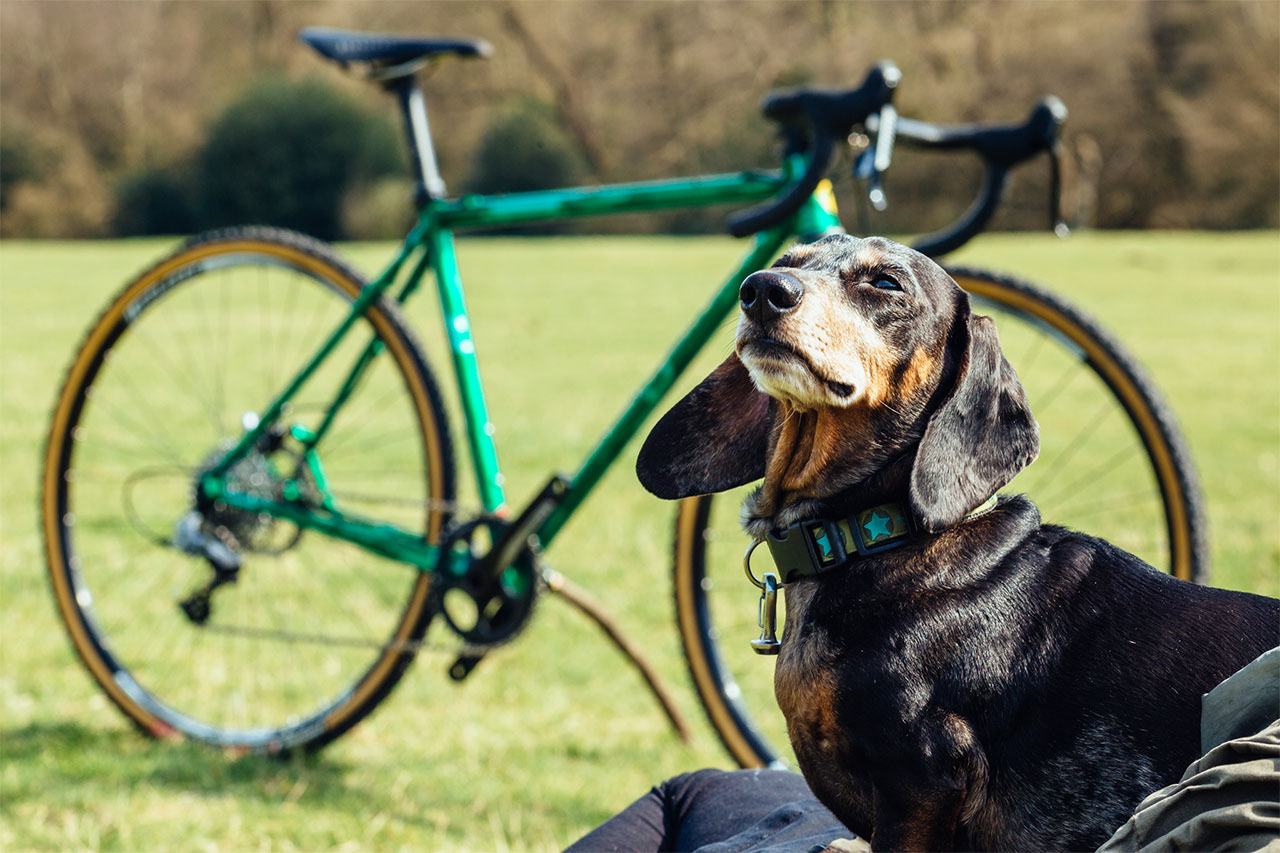 She will bring to Bespoked what she has dubbed the “Sausage Dog Camo Bike,” inspired by the unassuming Dachshund. “Sausage dogs are pretty special. In their minds, I reckon they are HUGE dogs. We're just tricked by their innocent appearance, but in reality nothing will ever stop them. They are never intimidated. They live their lives however they please.” The finish of this bike is a collaboration between Cole Coatings, illustrator Thomas Slater, and O’Moreau. The trio worked together to create special sausage dog branding and a dog camouflage in the paint scheme. All in all, there are 87 pooches in various forms and moods on the bike.

Robin, the lucky rider, has an ambitious season already laid out for this beast, with Grinduro, 3Peaks, and Dirty Reiver in addition to the local cyclocross leagues. 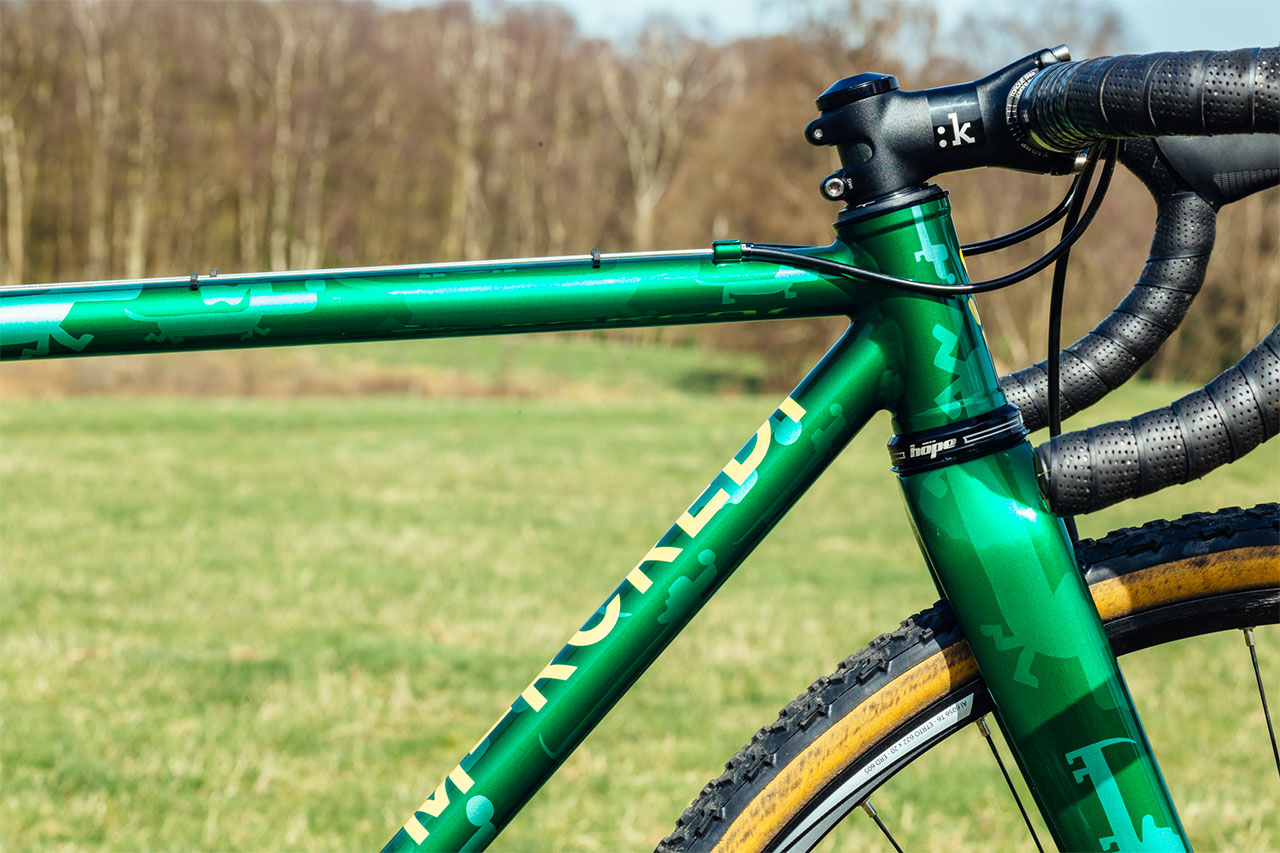 In the end, though, O’Moreau is looking to expand the love of custom bikes to new territory, keeping the threshold for entry low by pursuing batch production. “They think custom bikes are too serious, too pricey, and made to stand still. Or worse even, they think their riding doesn’t deserve it. That’s who I want to make bikes for. The grassroot boys and girls who wake up extra early to practice before work, who go back home by bike for Christmas, who take on stupid challenges, whose riding becomes ten times better once done on a bike that works for them.”

Estlund, a popular builder in the US, has ceased attending NAHBS altogether in favor of Bespoked (ed: and Philly). His emphasis is highly thematic, sometimes to a point one has to really know one's bike history, or be willing to do some research, to fully understand the depth of gesture and detail in a given Winter bike. Instinctively Estlund will default to gothic themes with high-arching shorelines interrupted by pinholes.

For Bespoked this year, he has collaborated with leather workers and engravers to tie the complete builds together. The one in particular that I’ve been tracking is called Laubgravur, a term “used to describe traditional German foliage engraving. This decorative embellishment has been used to decorate all types of metal work and is notably seen on hand made and engraved fine firearms.” 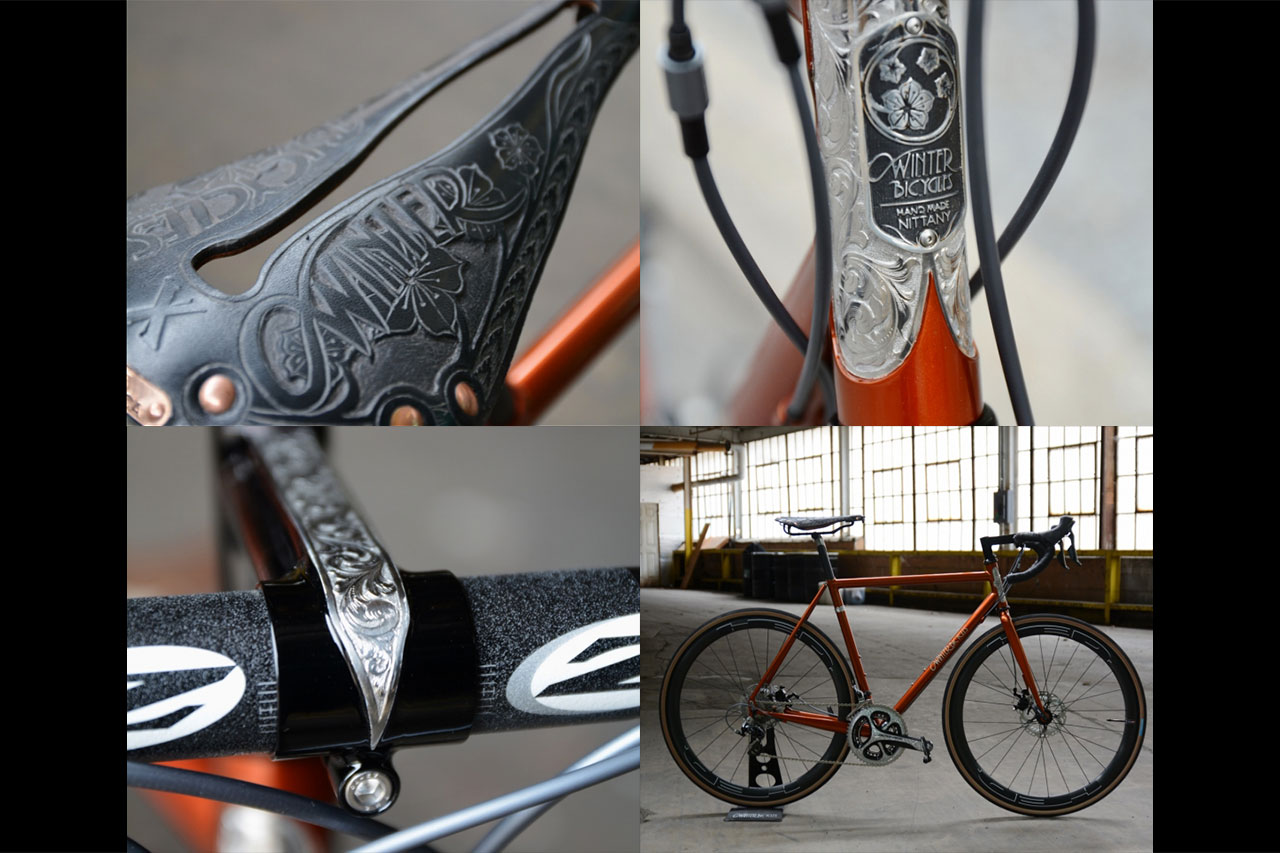 The bike, designed functionally as a fast road bike, is completely decked out in this pattern. The ornate custom engraving appears on the Winter stem and seatpost topper, Dura-Ace crank arms and Brooks saddle. The frame features Estlund’s characteristic Winter headtube, a gothic bilaminate construction with a massive window, also fully engraved. Otherwise, the frame is clean with moderate fillets for every other major joint, and minimal transitions on brake bridges, dropouts, and seatstay clusters. 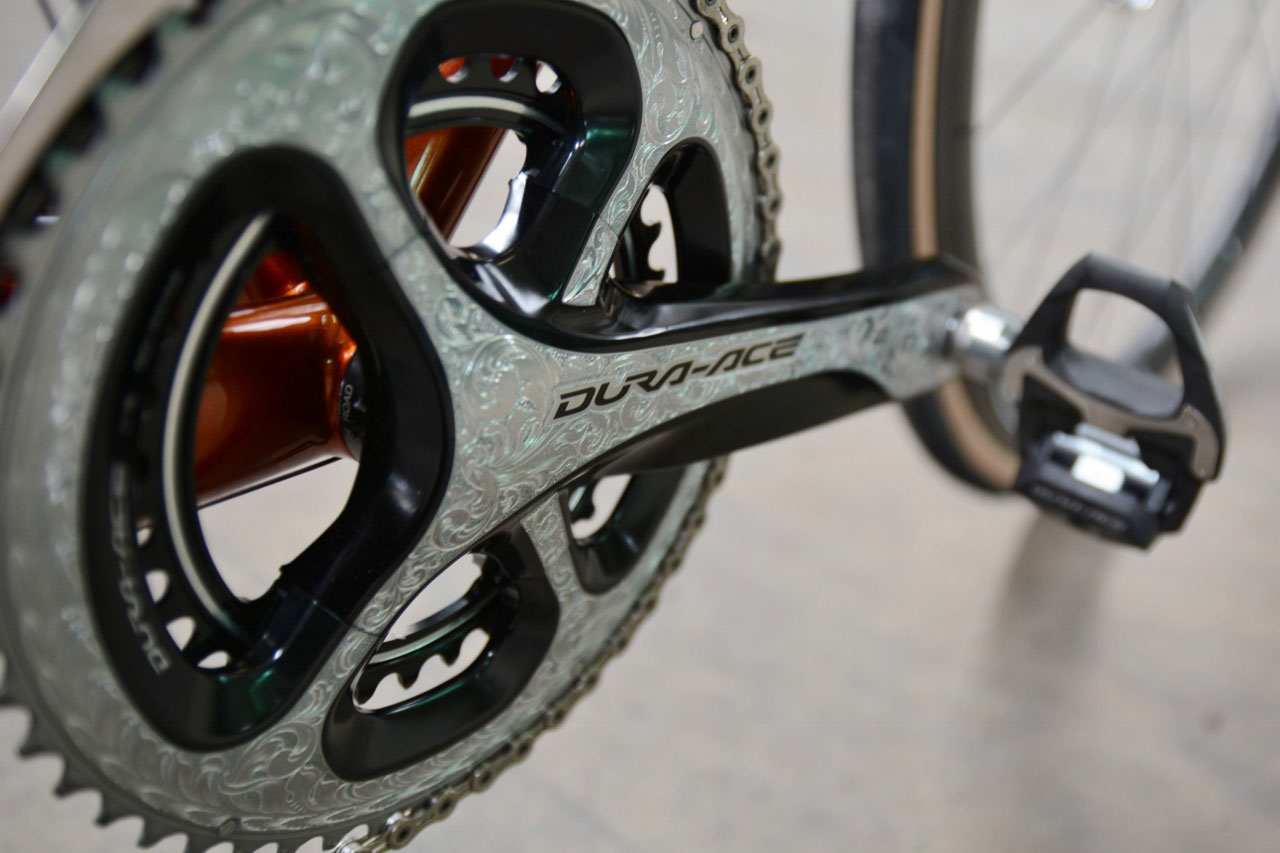 What’s fun about this bike is the tension between the highly detailed engraving and the collection of high performance carbon handlebars and wheels chosen for the bike.

The 2016 Bespoked arrived in the middle of a tumultuous time in the life of the redoubtable Petor Georgallou. His house boat had literally sunk into the canal just before Bespoked. And he was being forced to move from his workshop due to rising rent. But he rolled up to Bespoked, en herse (his tradeshow transport vehicle of choice), teeming with enthusiasm and greeted everyone visiting his booth with a hardboiled egg from a five gallon bucket so they could snack. It wasn’t the egg that caught me off guard, however. It was his eclectic collection of show bikes, with no thematic or aesthetic or disciplinary ties to one another.

But after getting to know Georgallou, it’s clear that there is a theme: Joy. Each bike in the booth was an expression of love for bicycles and for riding. You have to really love the bicycle as a machine to want to play with it in such an extreme way, to push its conceptual limits.

It’s for this big reason why I’m most unhappy I’ll be missing the show this year, because I will miss what Georgallou will be showing. He now has a steady home and shop from which to base, and with that I’ll let Georgallou speak for himself about a green bike I’ve seen developing over the past few weeks. 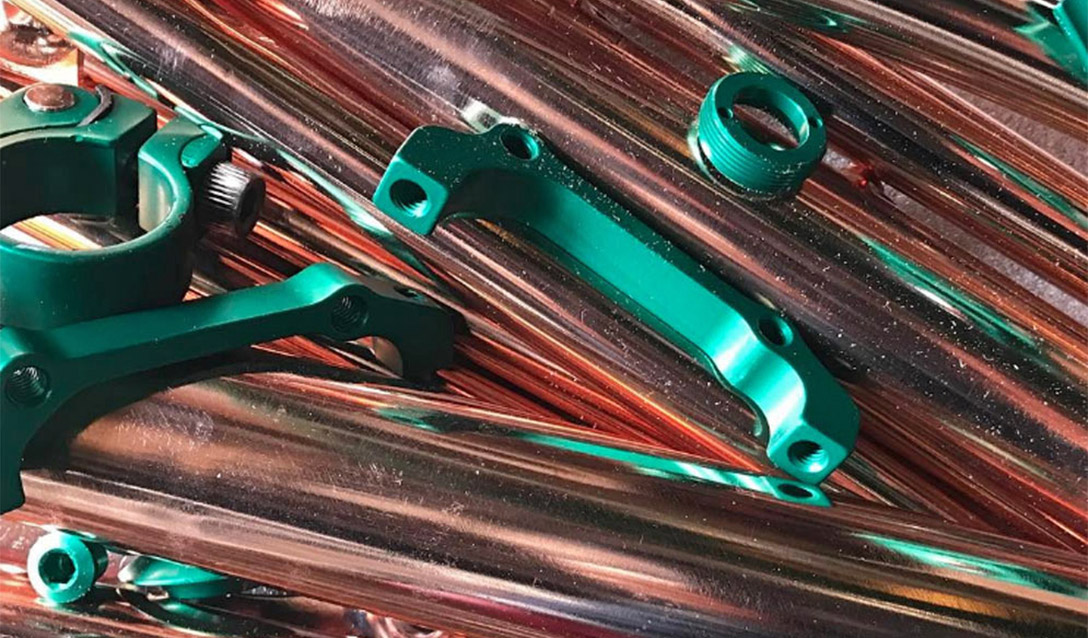 “I live by the sea now, so I’m building an off-road bike whose geometry is based off a completely separate design evolutionary path to the mountain bike. Mountain bikes have a long front centre and are designed for going fast down hills, but before that was the case, an English bicycle designer called Geoff Apps designed a bike called a Cleland, basically for riding off-road slowly and comfortably. 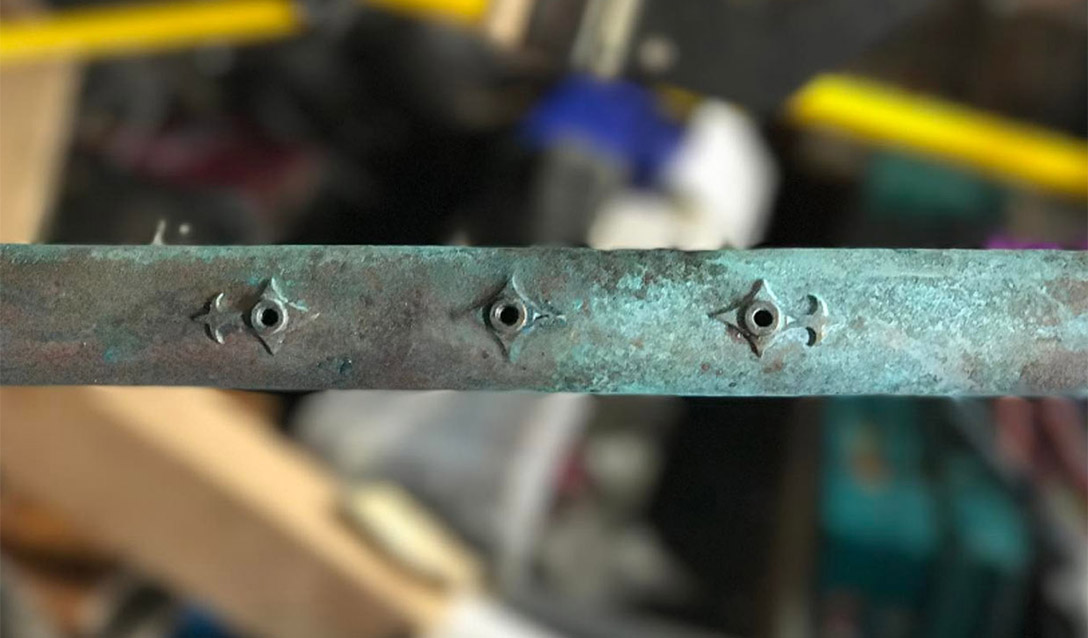 “It’s super short and very tall, and it’s based on 1950’s and 60’s trials (motorbike) design. You sit pretty much in the same position that you stand, have all the gears in the world, and it has a chain guard to protect the chain from mud on the inside.

“In terms of finishing, it’s pretty much going to get ridden in the sea, so all of the tubes are nickel plated, then copper plated before brazing, so they are protected inside and out. I’ve forced a patina on the copper so it looks like it came from the sea. I want it to look a bit like a cross between an Ancient Greek sculpture of Neptune and some plumbing, because I’m Greek and a sculptor and I live by the sea.”

Bicycle photos for this article were provided by the frame builders.

Part Two will be published on April 5