Craig Calfee: Kickstarters are a win either way

Cycling innovator Craig Calfee narrowly missed the Kickstarter funding target for his DIY bamboo kit bikes, yet he regards it as a successful campaign. He explains why. 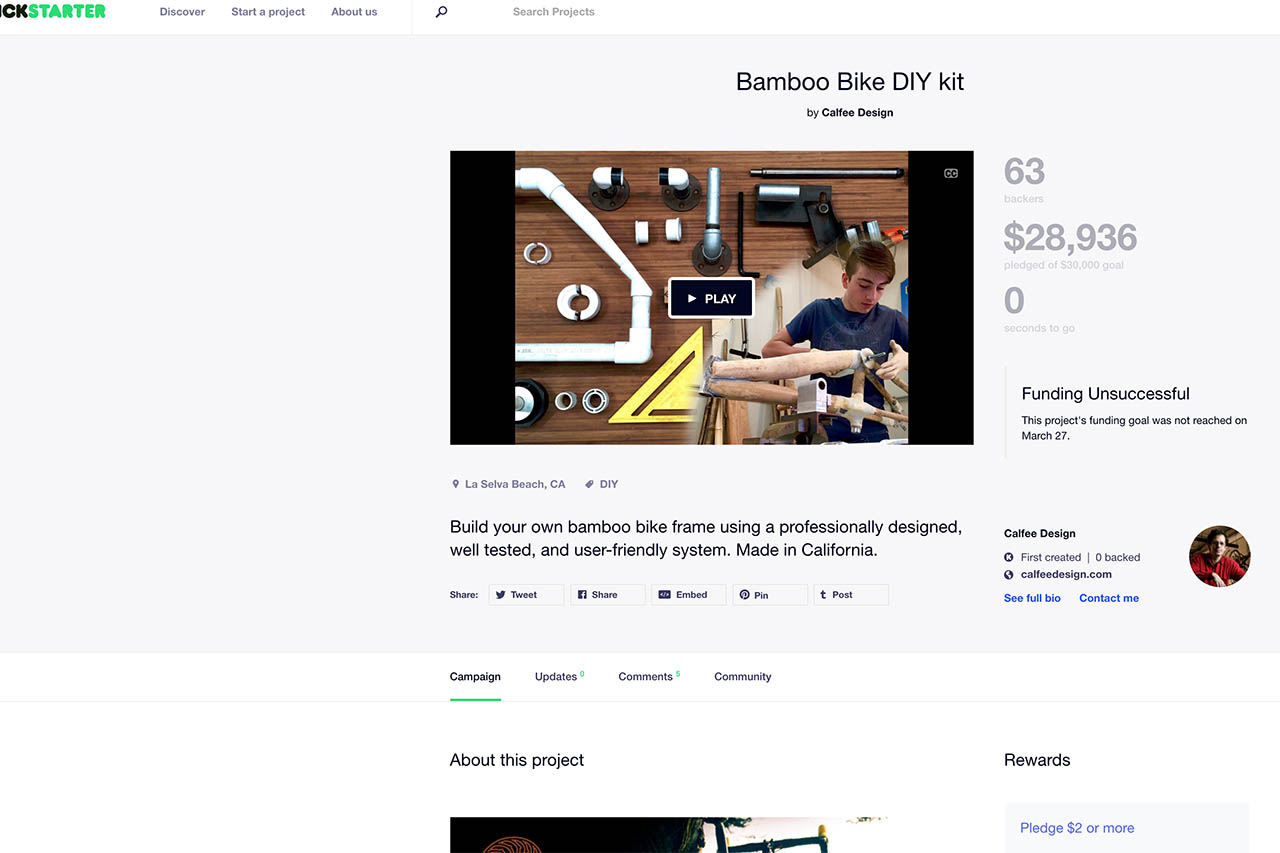 Crowdfunding is a great way to test out a bike idea. The tricky bit is to figure out precisely what you are promising to deliver and when you'll deliver it. If going through Kickstarter, you also have to decide what will be the lowest amount of money you'll need before really committing to that promise. That's a lot of crystal ball gazing! But it does force you to address nearly all of the issues that need addressing before launching into a new business venture. And it's a great way to do market research. There's nothing better than getting people to put their money where their mouse clicks are to prove your product will be desireable at the price you are proposing.

We used Kickstarter to test out our Bamboo Bike DIY Kit. I've been talking about this kit for a few years and even showed it at the Philly Bike Expo. There seemed to be a lot of enthusiasm about it so we decided to try a Kickstarter campaign to see what the real demand would be. Luckily, an intern applied for a 6 month internship and he was stoked to do the promo video and manage most of the advance work needed. We made the DIY kit How-To videos and figured out how much the kits would need to cost. We consolidated our various email lists of people who had expressed interest in the DIY kits. Then came one of the most difficult decisions: How much would the goal amount be? On Kickstarter, it's all or nothing. If you reach your goal, then you get the money and it's game on. If you don't, then you get nothing - and you are not committed to whatever you promised. So you have to decide "How much do I need to make all this worth doing?" It's a real test of your commitment and confidence in the idea.

We decided on $30,000 and to conduct a 30 day campaign. You can go with a longer campaign, but a lot of people do 30 days because it gets people to commit rather than think: "Oh there's plenty of time, I'll decide later." We got 63 people to commit $28,936. We didn't make it. Current Kickstarter Status: "Project Failed." But was it really a fail? I don't think so.

We learned a lot about what people want and in what combination. We got a few good questions that we hadn't addressed in the video or campaign page. We found out that quite a few people accepted our pricing and product and were ready to buy. We also didn't have to pay the 8 - 10% fees ($2,400 to $3,000) to Kickstarter and Paypal. As a test marketing effort, it was very successful.

So we're doing it anyway. I'll just tap into a line of credit I have at the bank and ramp up production. Those that are really into the idea already know how to find us and we won't be under pressure to get all the tools made and bamboo delivered by a certain date. And we can set up our regular e-commerce site to manage the orders rather than work through another system.

But if we were doing a different kind of project that needed an expensive mold made or a minimum purchase quantity that was beyond my credit limit, I would use crowdfunding again. Just gotta keep that crystal ball polished up!