Erik Noren of cycle manufacturer Peacock Groove loves most of all to produce bikes that are fun to ride and interesting to look at. For many years he was under-rated in the US frame building world, but that all changed for him at the 2016 Philly Bike Expo.

His star is rising. Erik Noren at NAHBS this year with the Purple Rain bike. Photo: Paul Skilbeck

Since winning Philly Bike Expo’s People’s Choice award last November for his Purple Rain Prince tribute bike, Erik Noren has found the pace in his Peacock Groove workshop decidedly faster, and now that his bike is on the 2017 PBE poster, there’s no reason he might expect any respite this year.

Noren’s now-famous Purple Rain bike was a hit, winning the People's Choice award at Philly and then a brace at NAHBS: Best in Show and Best Theme Bike.

The fast-talking Noren is not known for his verbal discretion, and as a former English teacher a broad lexicon fuels his bohemian wit. When it comes to his outlandishly excellent bike style, if we're making musical allusions, Noren's is somewhere between the avant garde band Pere Ubu and Prince.

“You couldn’t hit a bigger home run with a bike if you tried. That bike wasn’t even on the ballot at Philly and it won, don’t ask me how that happened. Now I have to get funds together to get to Philly. I’m on the poster, I have to go, I want to go, I’m obligated to go. There’s a new cargo bike I’m making a jig for. It will be on display at Philly, you’re going to look at it at love it." He said all that in the space of about five seconds, speaking on the phone post-NAHBS. 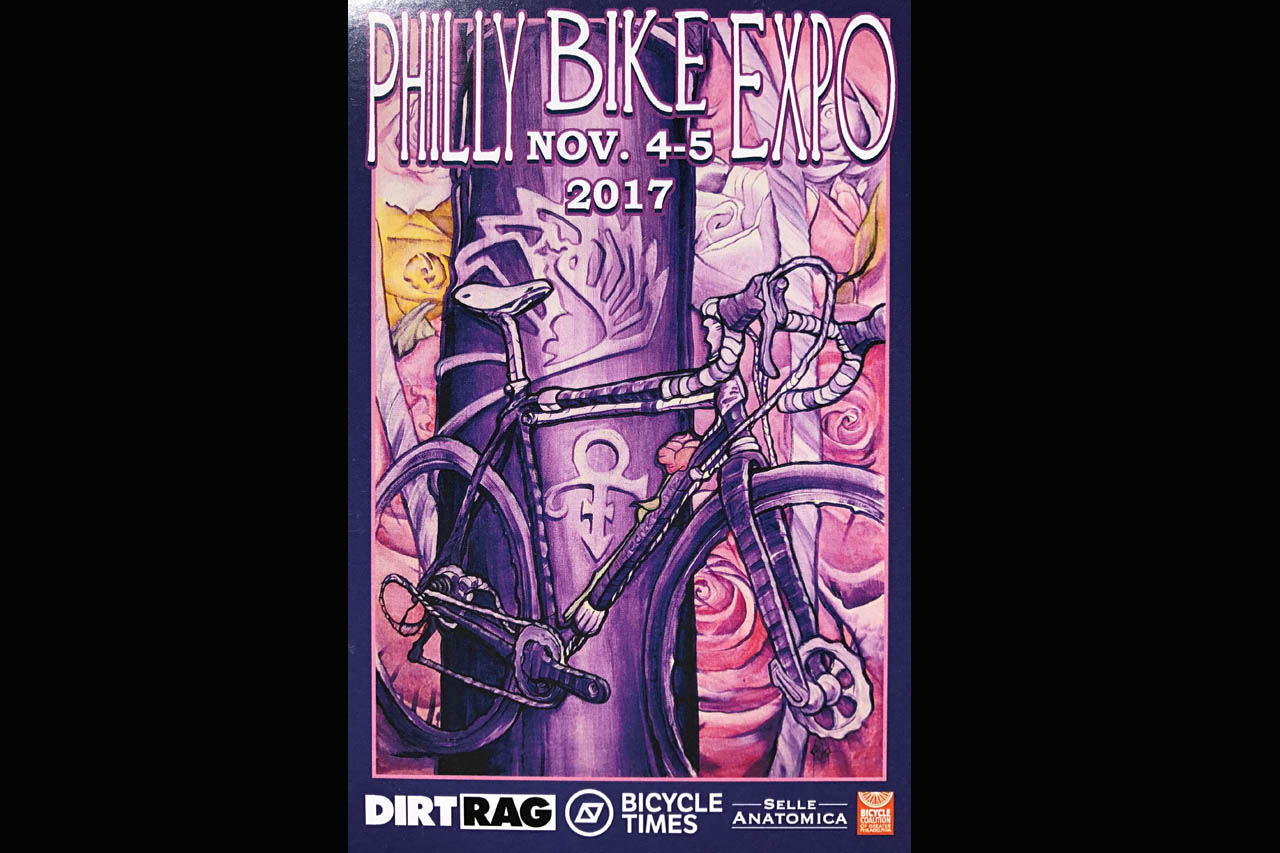 Winning the People's Choice at PBE2016 got Noren onto the 2017 poster. Poster art: Jeff Williams

Purple Rain has been covered in depth in just about every cycling publication that showed up at NAHBS. What Noren says happens the first time that most people see it is they get overwhelmed by the details. "The judges at NAHBS, when they came up to assess the bike I offered them the tour or asked if they could get it all in one look. They said they'd need me to tell them what to look at. Some people caught the dove etched on the brake lever, but nobody on their own caught the tears coming from the doves' eyes."

For this bike, like many others from his workshop, Noren put aside orthodoxy for the sake of artistry. "I used a front brake mount on the rear so I could drill seven holes in it, each painted white, for the song Seven, which is one of my favorite songs," he explains. The frame-fitting pump mount has a Peacock Groove detail: the pump never actually touches the frame. "I put a lot of detail into the frame, I wanted people to explore it and find things out for themselves."

Since few in the custom bicycle world are likely to fully agree on what comprises a great bike, not everybody was impressed by Noren's Purple Rain, some saying that fundamentally it's a fairly ordinary bike. Noren says this view misses the point.

"Some people have said they don't know what's so good about the bike, what makes it stand out. Look, I was a fan of Prince, and with this bike I was honoring a fellow Minnepolitan. That's the point of this bike. I can't think of something I would have done better on it," he says, adding, "The bike has a story behind it that really means something and really holds weight, and that's important."

Noren has more artistic flair than most frame builders, that has been proven over several years' exhibiting at NAHBS. Looking through the gallery on his website reveals a broadly skilled artisan builder just as capable of building workaday cargo bikes or competitive race machines as he is two-wheeled art objects.

Looking forward to the 2017 Philly Bike Expo, Noren says he's constructing a jig on which to build a cargo bike for the show. Peacock Groove has attained some notoriety on the bike paths of Minneapolis for a tricycle behemoth with 1200 Watts of pedal assist electric motor, running lights and a flat bed big enough to accommodate a large sofa. Attendees at Minnecycle this May might even be privileged to get a ride on this thing. 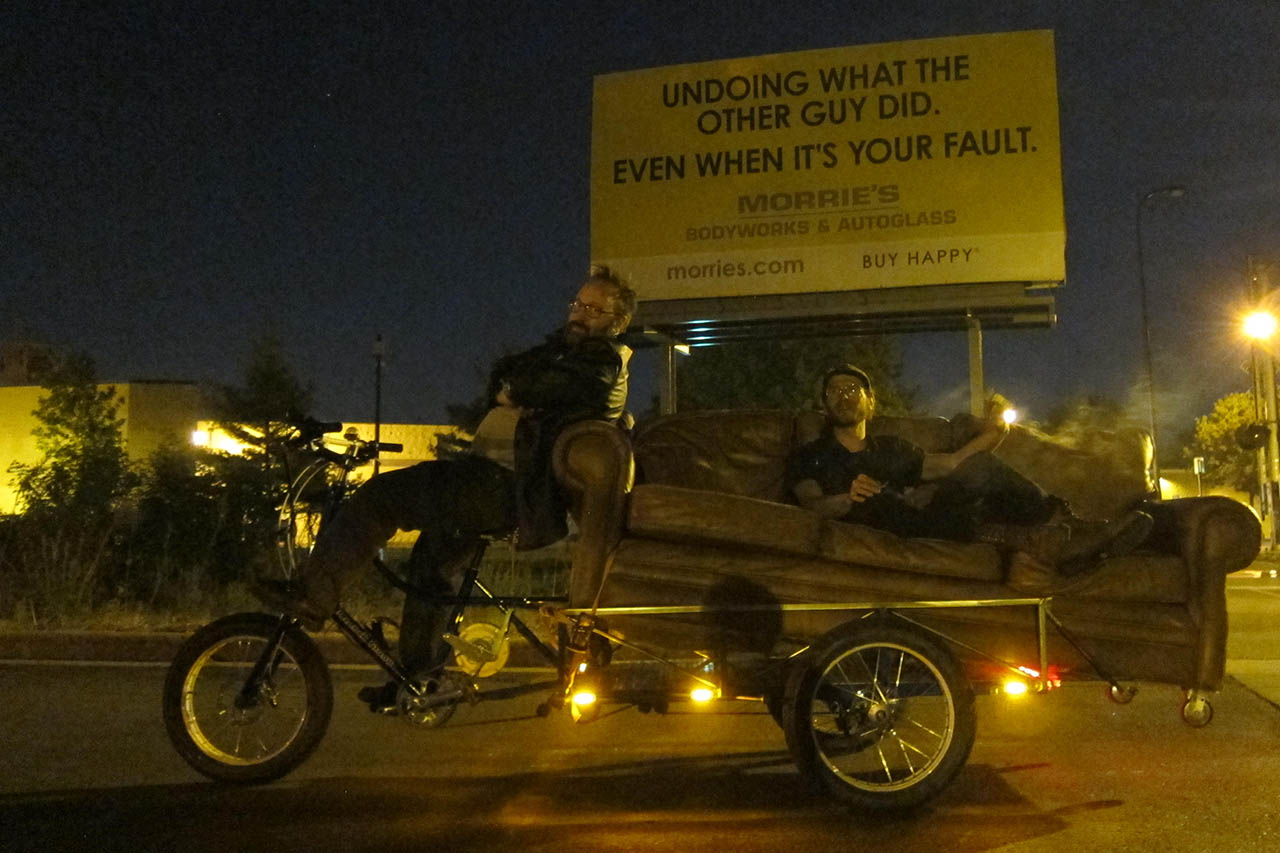