Plenty of carbon, not so much copy

Craig Calfee's innovative frames were the first to gain acceptance of carbon fiber as a new material among pro cyclists back in 1991. He has not stopped inventing newer and better approaches since then, and now leads the development of road racing bikes with rear suspension. 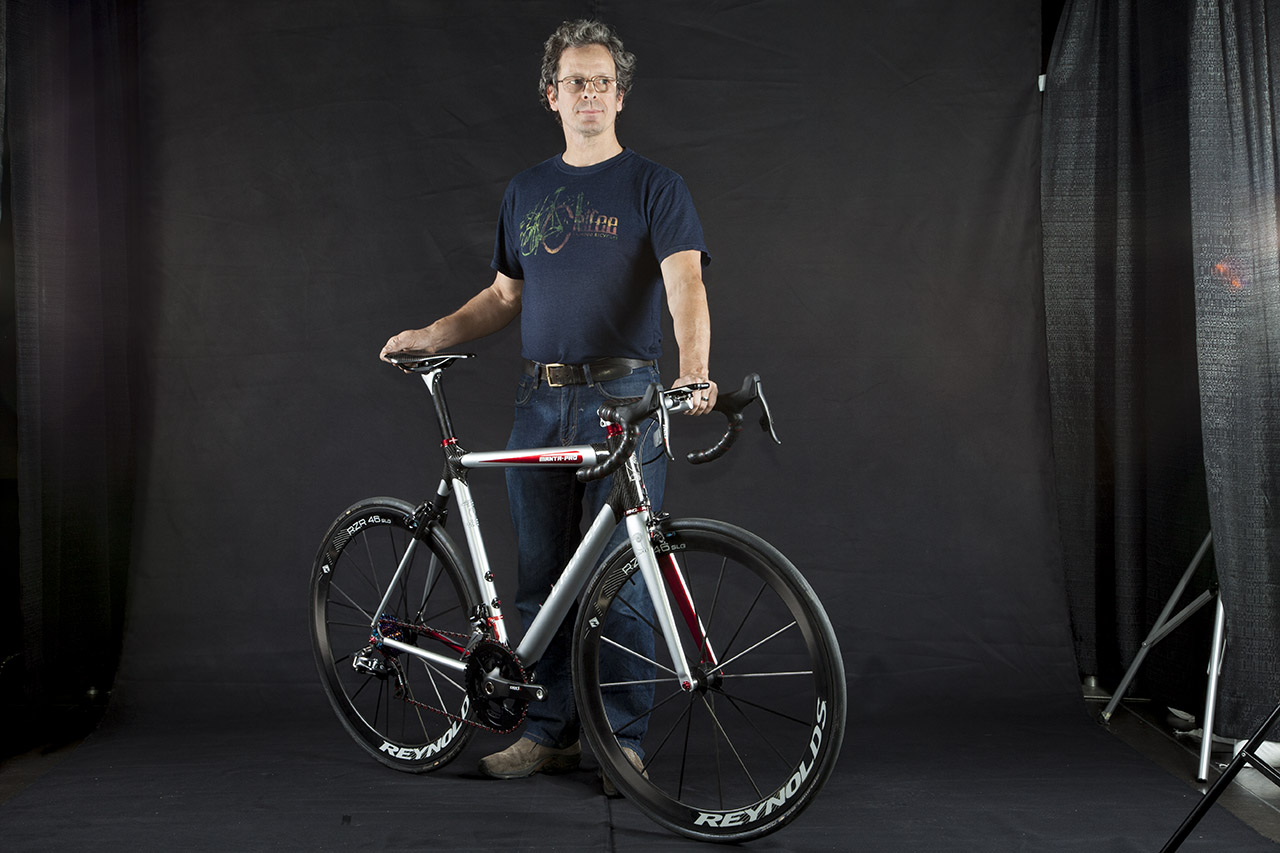 Craig Calfee did no time as an apprentice in a bicycle workshop, nor did he study engineering. His degree is in sculpting, from the Pratt Institute, and his first big idea in cycling came after writing-off his (steel) frame in a collision with a car. Taking a tip from the high-performance carbon composite boats he worked on after graduating, he responded to the necessity for transportation by inventing his own carbon fiber bicycle frame. Convinced that he had hit upon the future of bicycle frame construction, in 1987 Calfee moved from Massachusetts to California where he set up as a carbon fiber bicycle frame builder, initially in his spare time while working as a carpenter.

The major breakthrough came about three years later with an episode that would change what pro cyclists ride. A few companies were experimenting with Carbon fiber for  bicycle frames, but the material was viewed with some skepticism in the peloton and team staff. Many thought it too flimsy (some mechanics still think this!), and frames with metal lugs weren’t holding together. Yet America’s great Tour de France champion, Greg LeMond, believed in the material and he’d heard Calfee’s carbon fiber frames were both strong enough for mountain biking and could be made to measure.

After a trial, LeMond ordered 18 frames from Calfee for Team Z at the 1991 Tour De France. “There were some other companies making carbon fiber bicycle frames, but either they were limited by molded construction methods or they were trying to bond carbon tubes to metal lugs, without fully appreciating that those two materials try to reject each other,” said Calfee, who had developed a carbon fiber lug made for a frame that would be very light, and stiff but not too stiff. Calfee worked on LeMond bicycles until an amicable divergence a couple of years later.

Calfee has retained his approach to making compliant carbon fiber frames since then, and cites test data that show compliant frames reduce fatigue in longer rides and races, compared to the ultra-rigid oversized carbon tubes that may make a bike feel incredibly fast in a 5km test ride, but provide an unforgiving and potentially tiring ride after 100km or so.

Introducing carbon fiber frames that the pro peloton liked may have changed the world, but Calfee didn’t stop there. His pioneering work went on to include bamboo bike frames, the first production carbon tandems, a tandem that uncouples to become an individually-ridden bike, he made tandems that fit in suitcases, he developed carbon fiber combined bars and stems that are individually created for the lightest cockpit possible, and he pioneered internal Di2 battery and wiring systems that hide away in the seatpost. And all this from a small, low-key company based near Santa Cruz, California.

Calfee relies on a form-follows-function philosophy, and even bikes he builds with stock geometry are made to order according to the customer’s weight and riding style.

His inventiveness reaches across borders, too. When traveling in Africa he saw that while there was plenty of bamboo, there was a shortage of bicycles. He reached out to help people build their own bamboo bikes. These are shipped to the USA and sold here, so the African builders can make more money than selling the bikes locally. It’s a type of offshore labor sourcing that few would object to.

The next big thing for road racing, says Calfee, is suspension. Extensive testing has revealed performance gains when the wheel adheres more constantly to the road. “Think of it at a micro level: each time the wheel rises a little, maybe doesn’t even leave the road surface, but then falls again and there is a compression, every one of those is like a tiny climb. Not only does all of that extra movement take energy away from forward propulsion, those miniature bumps add up during the course of a long ride, or a race, or a stage race. I have no doubt that in the future we will see pro cyclists riding suspended bikes.” Backing up his words, he has recently released a second generation of Manta bicycles, which feature a suspension coil in the rear wishbone.

Craig Calfee is a tinkerer, a tweaker who is focused on making a better bike, be it for racing, riding to work or carrying produce to the market. Coming from a non-traditional background he is unconstrained in his approach and in recent history has a hallowed place in a tiny group of people who have brought significant change to the way bicycles are constructed and ridden.