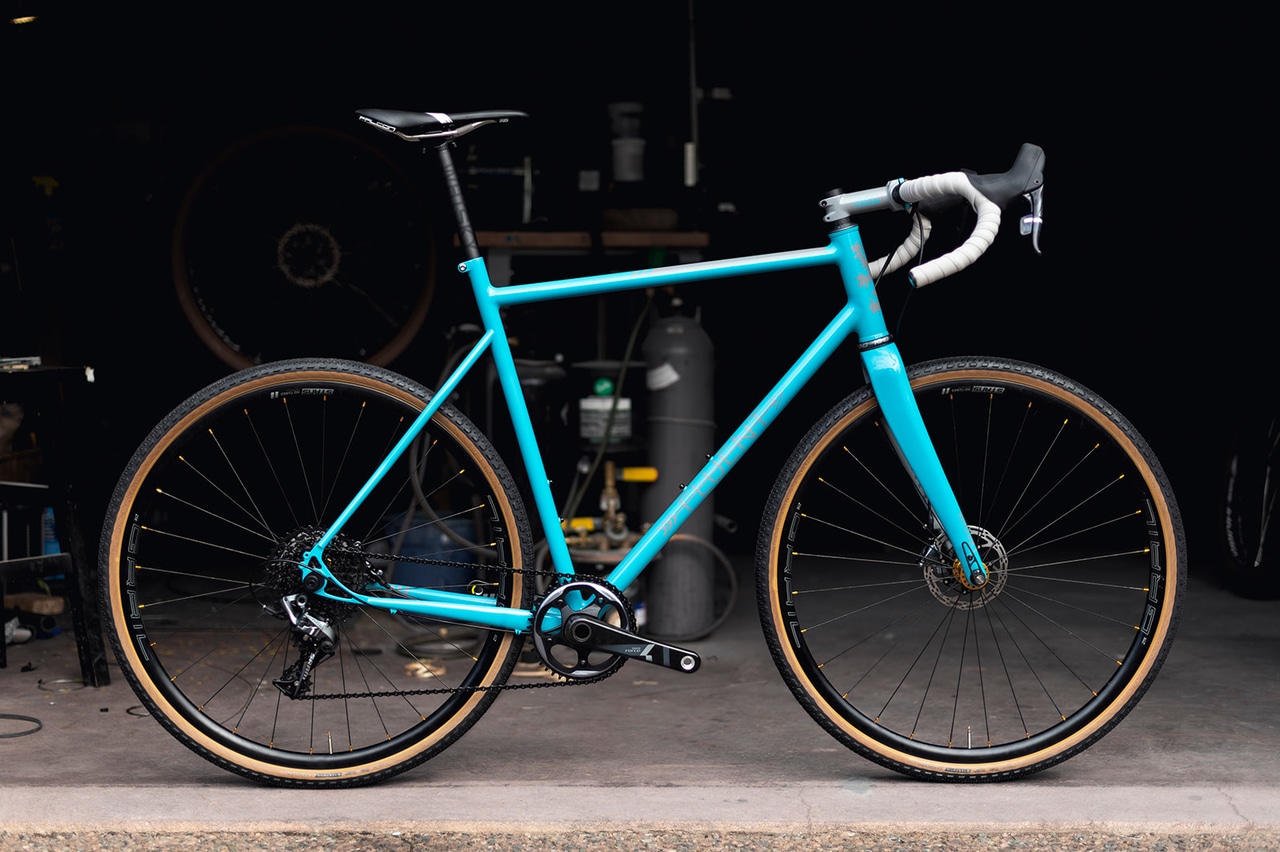 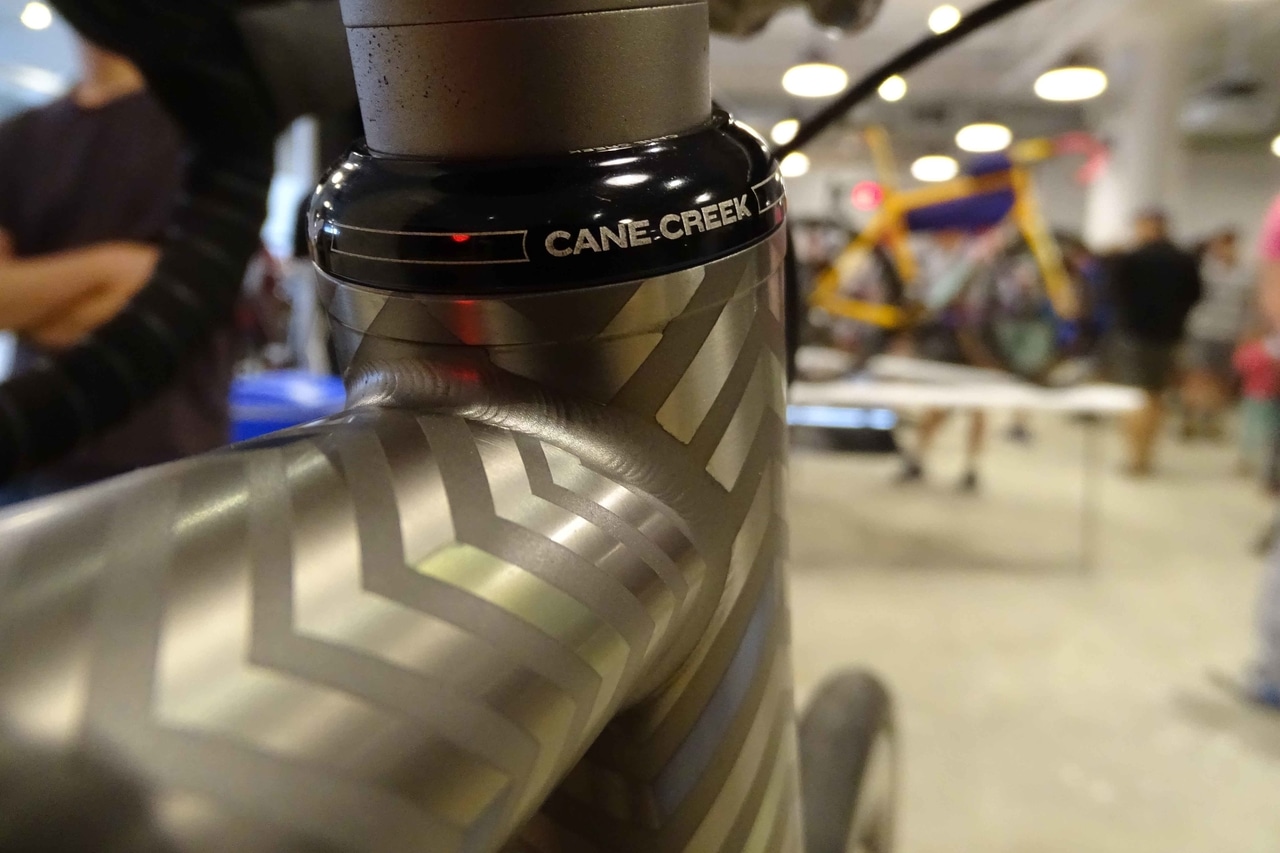 Since Firefly Bicycles burst into the handbuilt bicycle world in 2011, the team has made an indelible impression worldwide with swoon-worthy design, construction, and finish work. They produce high-performance vehicles which happen to be both highly durable and astonishingly beautiful. Here we see a detail on an all-road rig, made from externally butted titanium tubing (in-house butting process) and with a 3D printed titanium chainstay yoke. Firefly has fine-tuned its in-house anodizing process over the years, and those ano finishes have become as much a part of the company’s identity as the flawless construction. http://fireflybicycles.com/ 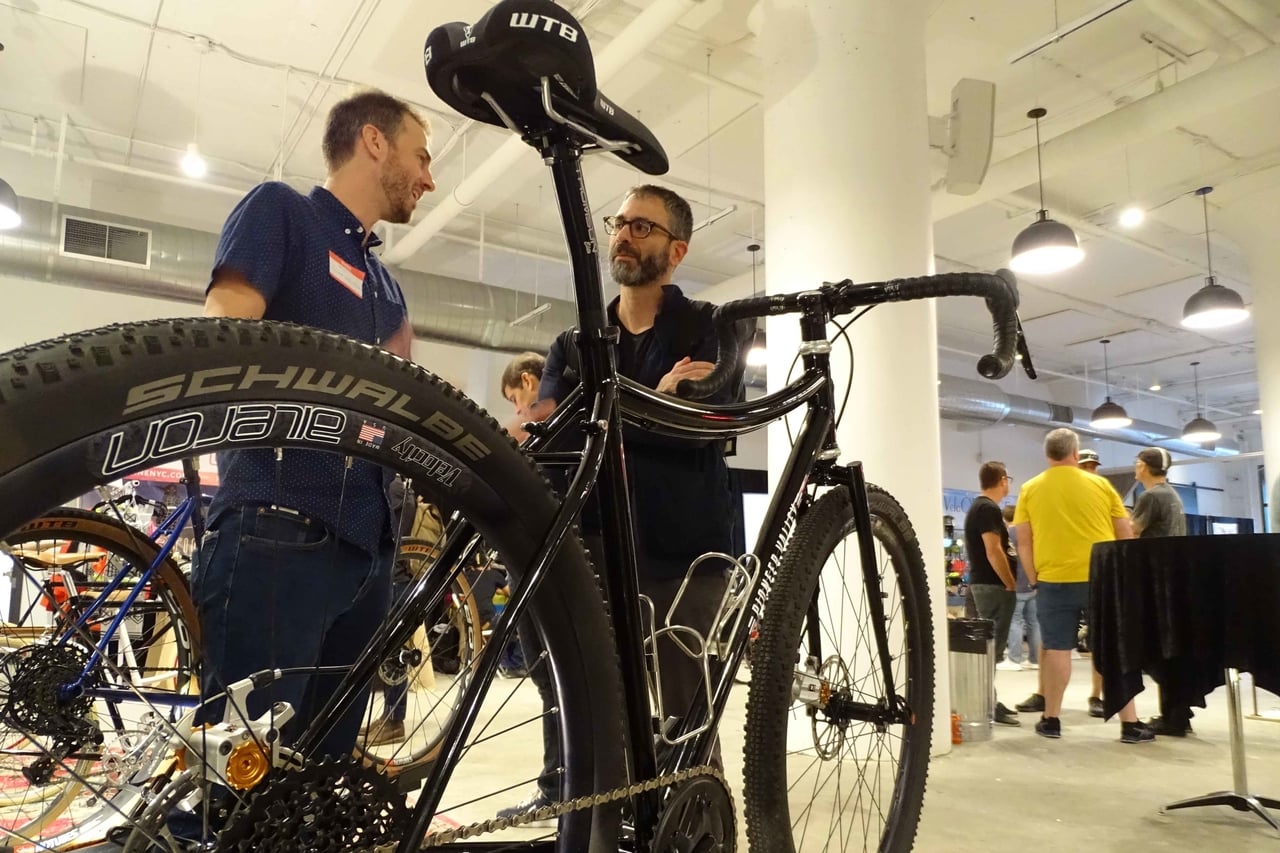 Niall’s client for this Pioneer Valley Frameworks whip is on the short side, but burly (his other hobby is weightlifting), and he wanted the perfect bike for all-road riding including some bikepacking and singletrack. For the bike to perform well for trail and technical riding, it needed to have a relatively high handlebar position, but the client’s short inseam meant that top tube standover height would have to be addressed creatively. The solution: a downward curving top tube means less exposed seatpost and a shorter stem while not limiting room for bottles on the downtube and seat tube. Thin walled butted tubing from Vari-Wall and True Temper fit the bill (Niall uses their tubing exclusively). A downtube gusset (a signature feature on PVF bikes) increases strength, as does the custom seat cluster lug that Niall built. Finally, a house-made chainstay yoke CNC-machined from 4130 steel allows for wider tires while keeping the chainstays as short as possible. This bike allows tires ranging from 650b x 2.1” to 700c x 46. http://www.pioneerframeworks.com/nfgcycles.com/Welcome.html 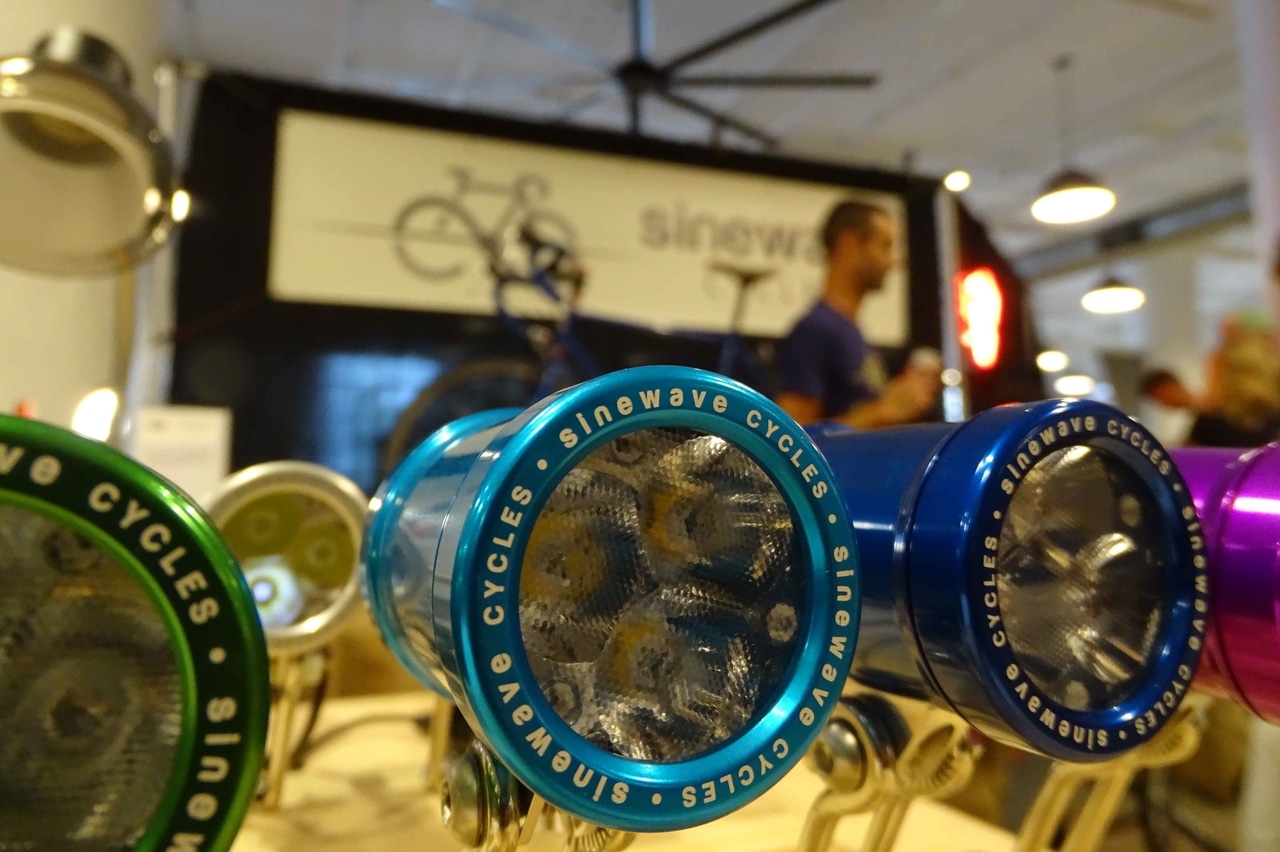 Sinewave Cycles, based in Cambridge, Massachusetts, makes chargers and headlights designed for use with bicycle dynamos. Company owner David Dean, an electrical engineer and bicycle touring enthusiast, does all of his design in-house and parts are machined, anodized, and assembled in Massachusetts and California. Two available charger models convert electricity generated by your hub or bottle dynamo into USB output to charge your phone, GPS device, or lighting. However, Sinewave is perhaps now just as well known for its headlight, the Beacon. With a built-in charger, the Beacon is wired directly to your dynamo. The only commercially-available US-made dynamo light, the 750-lumen Beacon was designed with bikepacking in mind and as such is completely waterproof, has a 5-minute “standlight” capacitor, and is available in a wide variety of colors. https://www.sinewavecycles.com 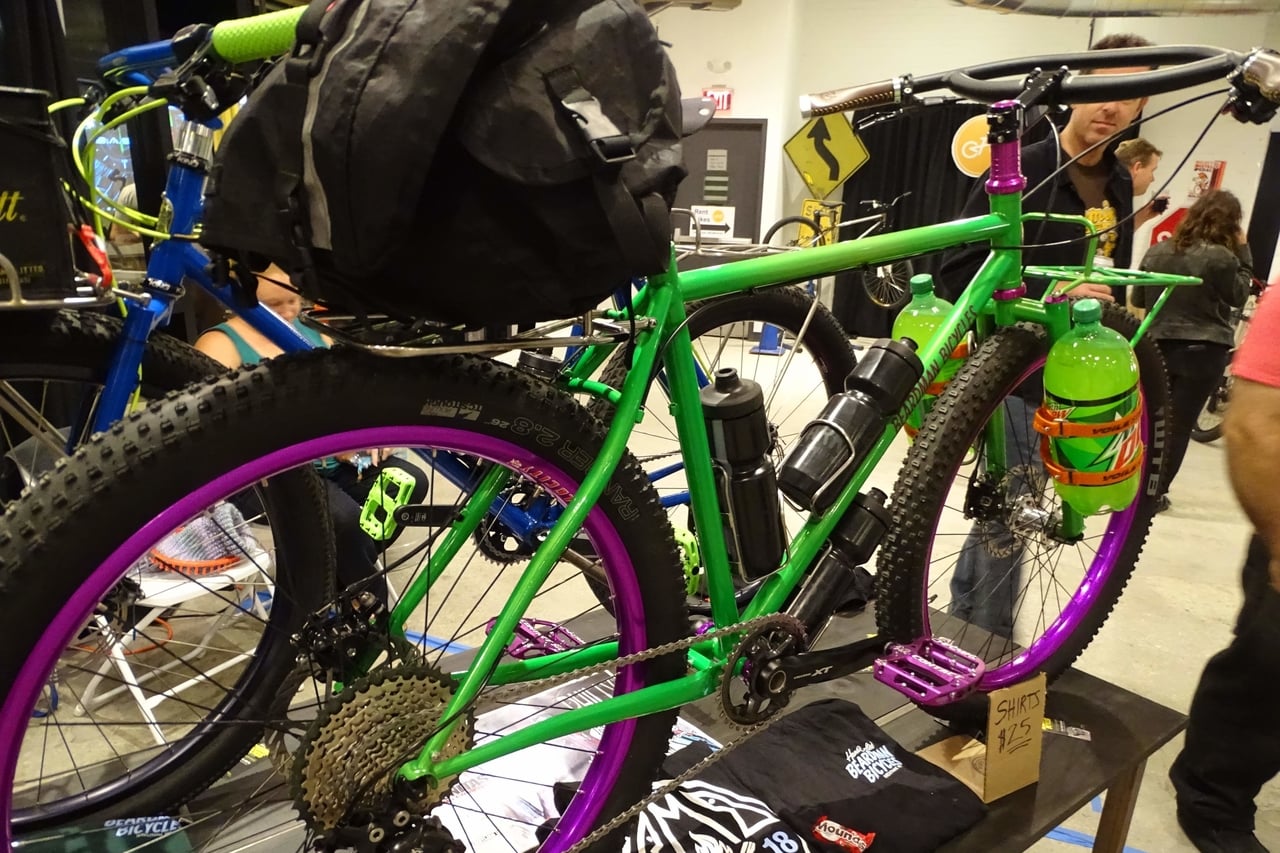 Beardman Bicycles has become perhaps most noted for their all-roads / all-purposes bikes. This example, designed for everything from bike camping to touring to grocery runs, is constructed from a variety of steel tubing, TIG welded, with custom racks front and rear. Notable about the stainless rear rack is the mounting technique: in addition to using eyelets on the seatstays, the rack attaches to the seat post with a custom-built clamp. This custom segmented fork (dubbed the “Soda Party” fork by the Beardman team; a more slender, tapered “Slim Jim” fork is available for bikes not designed to support heavy loads) has machined aluminum press-fit caps with shop-made rack mounts, anodized to fit the overall color scheme. More photos of this bike can be found on the Beardman Bicycles Instagram feed (@beardmanbicycles). http://www.beardmanbicycles.com/ 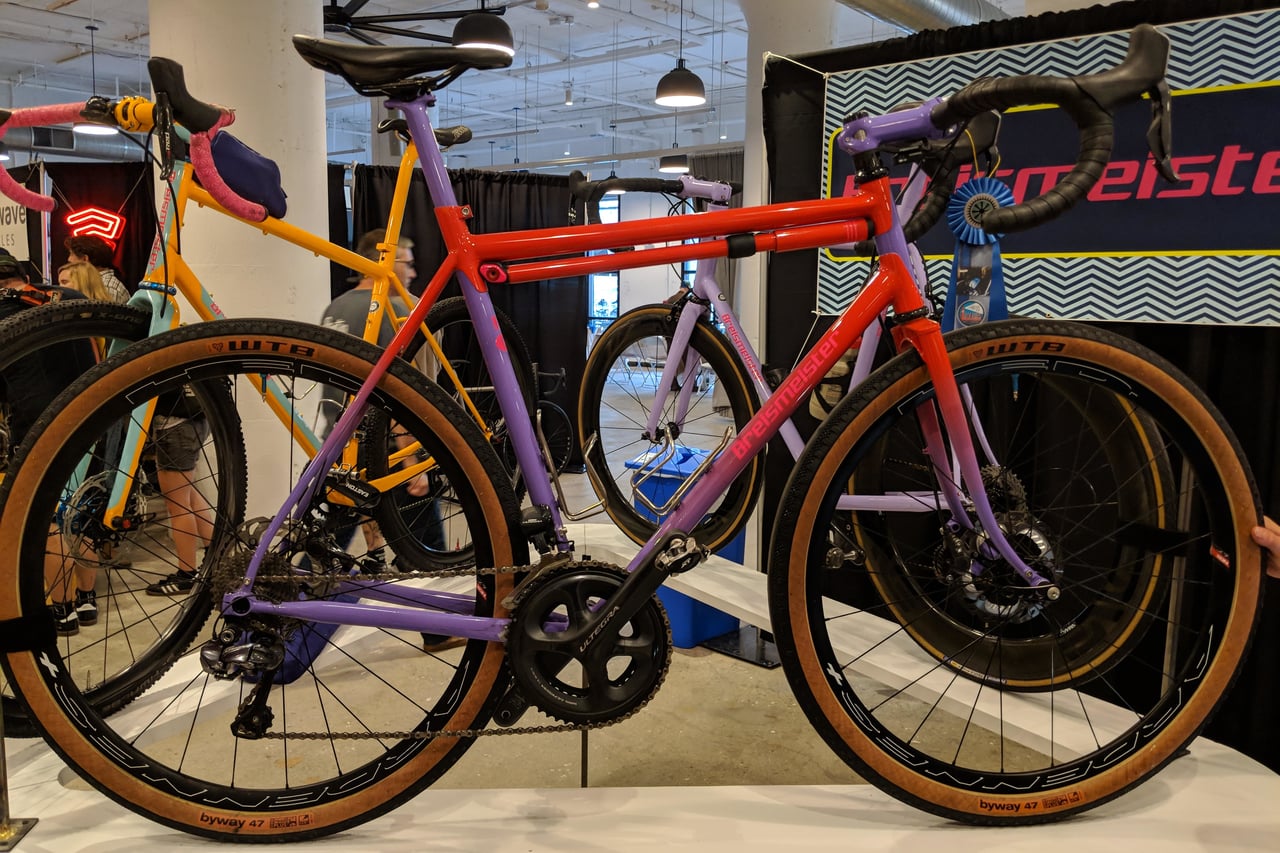 Breismeister Bicycles won the Best Gravel Bike award at the 2018 NAHBS with this all-road rig, and it set jaws dropping at the Ball as well. Doug B. describes this bike’s spiritual recipe as a generous portion of Bridgestone MB-1, with a dash of Ritchey P23, and a pinch of Mountain Goat. Details: Columbus Max front triangle, fillet brazed, highly modded Pacenti fork crown. Bushel-fuls of deep custom: in-house milled seat post binder and post mount brake tabs, all with replaceable threaded inserts. Bi-lam head and seat tube joints. And of course, a Silca pump painted to match, by Ben Falcon Paint. Doug’s color schemes are some of the signature features of his bikes, and this one is no different. Internal cables and wires let the finish stand in its full glory! Seen here set up with 650b x 47 tires, it can also take 700c x 35.
http://www.breismeisterbicycles.com/ 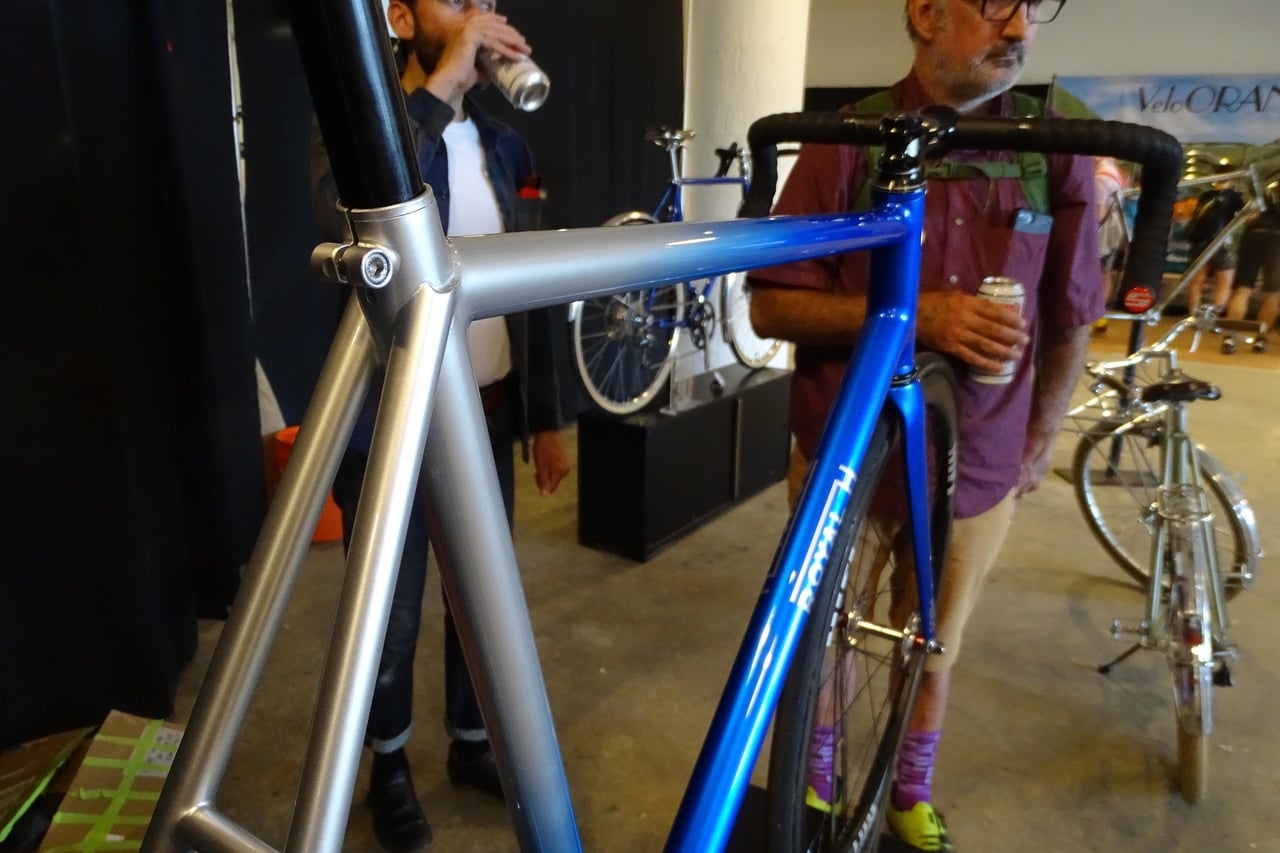 Royal H impresario Bryan Hollingsworth never fails to wow a crowd and the jewels he brought to this year’s Ball carried that tradition forward. Among the bikes in his booth was this track and crit whip. Tubing is Columbus Life, chosen to maximize stiffness while keeping weight down. The oversized head tube and bottom bracket meant that fillet brazing was in order, rather than the lugged construction for which Royal H is noted. A Columbus carbon fork with tapered steerer and oversized T47 bottom bracket provide stiff connections for explosive acceleration. Bottom bracket height is a bit higher than the norm so that its rider can pedal through the turns on a crit course. Paint is by Ben Falcon Paint in Brooklyn, noted for his fade work. Completing the bike are a Thomson stem and seatpost, saddle from Fizik, Ritchey bars, Cane Creek headset, SRAM Omnium track cranks, and Hi-Fi carbon tubular wheels with Continental sew-ups. Built for speed!
https://royalhcycles.com/