Classic Rendezvous Weekend: The Last of the Mohicans

The Classic Rendezvous Weekend, a celebration of vintage, classic and retro-inspired bicycles, takes place this weekend, May 18-20, in Greensboro, North Carolina. Organizer Dale Brown says that the 2018 event will be the final one.

Dale Brown has been a major player in the vintage bicycle world since, well, many of the current bicycles in his collection were contemporary, cutting edge models.

The long-time proprietor of Cycles de Oro in Greensboro, North Carolina and the popular vintage bike website Classic Rendezvous is looking toward retirement.

Invoking the name of an American literary classic, James Fenimore Cooper's historical novel from 1826, The Last of the Mohicans, a postcard from Brown mailed out to Classic Rendezvous subscribers and past show attendees earlier this year insisted that the 2018 Classic Rendezvous Weekend will be the final one.

The show has a history nearly as long as at least a few of the bicycles that will be on display at the Lewis Rec Center in Greensboro for Sunday's show and expo. In 1998, a year after a similar vintage bicycle event, L'Eroica, saw its own humble beginnings in Gaole, Italy, Brown promoted the first Cirque du Cyclisme - a vintage bike ride, swap meet and show that offered a "3-ring circus of bike fun," according to the Classic Rendezvous website.

From its 1998 debut until 2007, Brown held the Cirque du Cyclisme in Greensboro. In 2008, fellow vintage bicycle enthusiast Wayne Bingham, who runs Velo Classique in Purcellville, Virginia, took over promotion of the show and moved the venue to the western Washington D.C. suburb of Leesburg, Virginia.

Bingham ran the event through 2014. In 2011, and again in 2016, Brown ran fill-in events that he called the Classic Rendezvous Weekend in his hometown of Greensboro.

The final 2018 event will follow a similar format to past events: a Friday afternoon check-in, fixed-gear ride through quiet streets in downtown Greensboro and social gathering at a nearby restaurant afterwards, Saturday seminars presented by vintage and handbuilt bicycle lumnaries and an evening awards party, and Sunday morning's Tour de Guilford ride through surrounding Guilford County followed by the show and bike expo at Lewis Rec Center from 9 am to 3 pm.

This year's seminar presenters are Dale Brown and Wayne Bingham with a pictorial review of 20 years of Cirque du Cyclisme and CR Weekend events, Bicycle historian Alexander Von Tutschek from Bath England, who will present some of his favorite classic cycle components from 1937-57, Connecticut frame builder Peter Weigle, who will speak about his recent success at France's randonneuring bicycle competition Concours des Machines, and Ken Wallace, owner of the Bisbee Bike Brothel in Bisbee, Arizona, who will relate predictably intriguing stories of collectible bicycles and their makers.

Brown said that many of the previous cast of characters are planning to be in Greensboro for the final show, including Weigle, Jamie Swan, and Dave Moulton. Perhaps inspired by the announcement of the show's final edition, Brown said that a capacity crowd of show bikes and vendors are expected, along with a few new names that should attract attention from the bicycle cognoscenti. 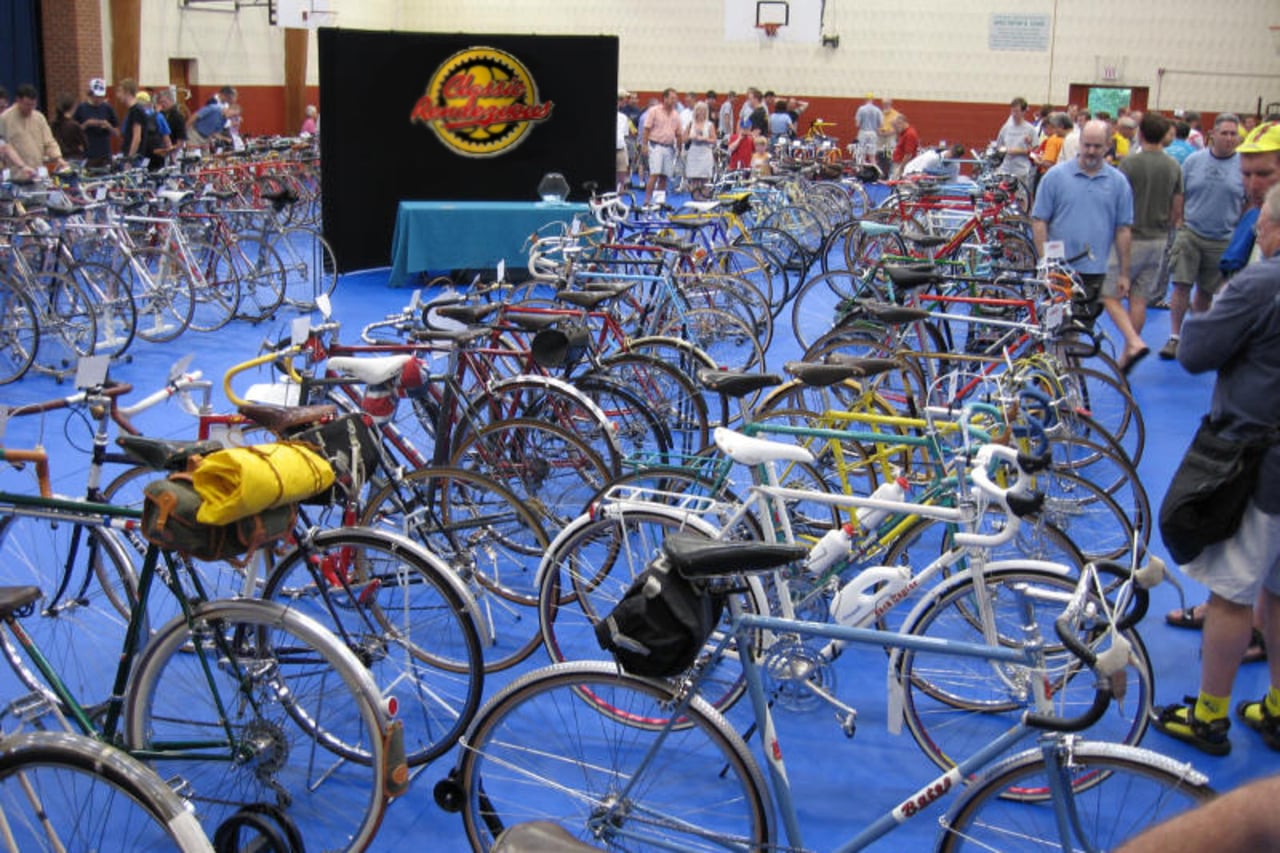 "One new attendee and frame building star is Mark DiNucci! There are quite a few folks I don't know who are attending. It's exciting that new folks are coming into this hobby. And we have the two top men in frame painting, Joe Bell and Jim Cunningham, attending as well," said Brown.

You can still register on-site for a CR weekend pass that includes admittance to all three days of events, or admission to the Sunday show may be paid on-site and is included with the entry fee to the Tour de Guilford ride, which starts and finishes at the same location (Lewis Recreation Center in Greensboro). Full details are available here.

Recalling the hero of Cooper's American masterpiece, Brown is looking for his own Hawk-eye to rescue the Classic Rendezvous Weekend from its demise, rumors of which are not - in the words of another American master, Mark Twain - greatly exaggerated.

"Nobody has stepped forward yet, but I hope that someone will. I will be happy to share budgets and advice," said Brown.