Anna Schwinn's reflections on the changes at Bespoked since her first time in 2016 suggest much is afoot in the UK.

It may be a low-key show, but small is beautiful. Photo: Paul Skilbeck

In her first visit to Bespoked in 2016, HBG correspondent Anna Schwinn was dazzled by a few of the offerings in the show hall, but also she expressed some distinct reservations. Not so on her return two years later.

Long before flying out, Bespoked had become the bike show I was most excited for this year, so much so that I eschewed the North American Handmade Bicycle Show for it. The projects I saw coming together for Bespoked through social media were audacious. Rumors abounded of new framebuilding infrastructure. The builder list, including several notable US builders, was shaping up to be something interesting.

I’m happy to report that the show did not disappoint, this was easily the best bike show I have attended in years. 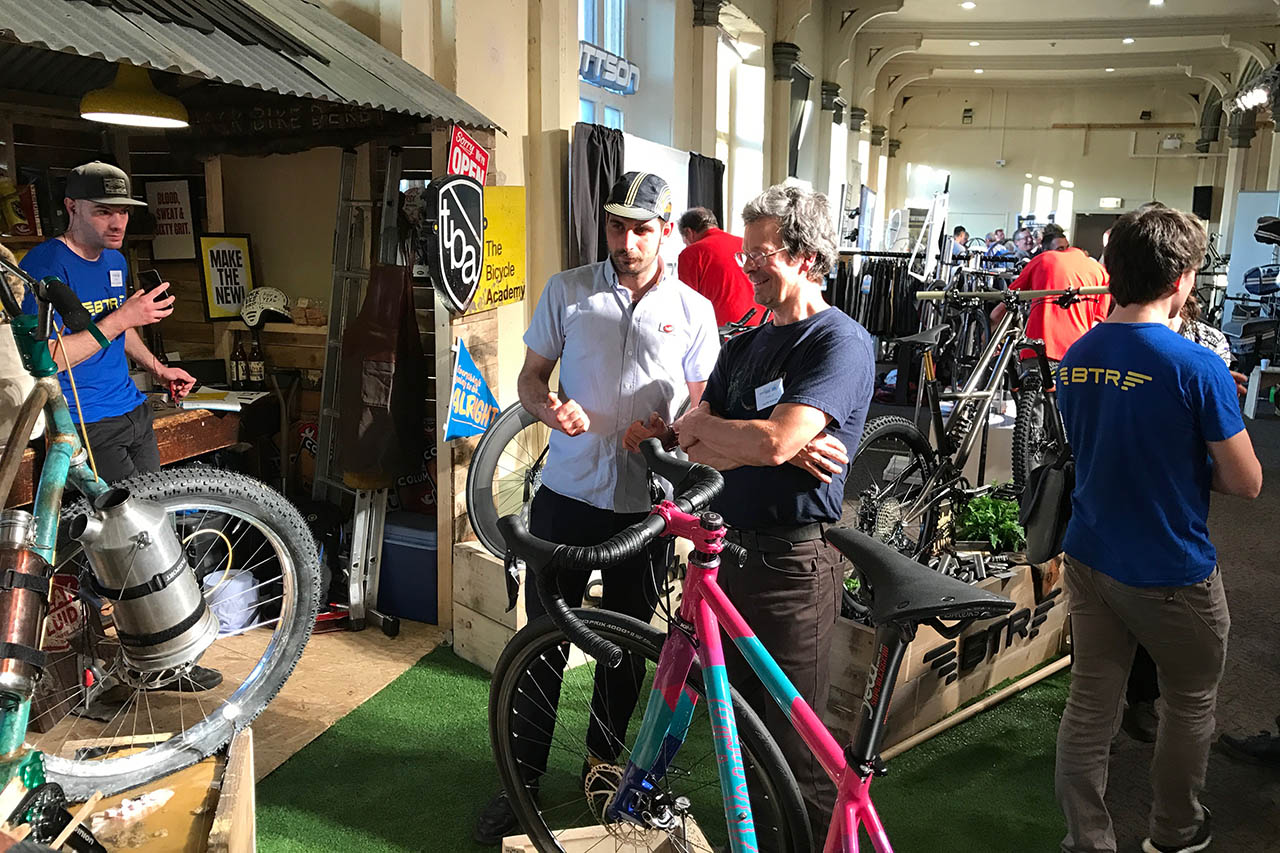 A sign of the times: Craig Calfee (right) talking with Petor Georgallou in The Bicycle Academy booth at the 2017 show. Calfee returned for the 2018 event.

I came in blind to Bespoked in 2016, the last time I attended the show. That year, Bespoked was dominated by road and randonneur, chromed or polished racks, and fillet brazing. The dynamic was, to be honest, negative. The more established builders, who had come up through established framebuilding programs, apprenticeships, and workshops, were largely nervous or antagonistic towards the massive influx of new builders training through the newly formed The Bicycle Academy, which was only three years on at that point.

Would sales from established builders be undermined by this new wave? Would this new framebuilding school produce builders that were up to snuff? Would the established builders ever accept talent from this new institute into their community? The uncertainty and stress was tangible, and was articulated to me repeatedly throughout and after the weekend. 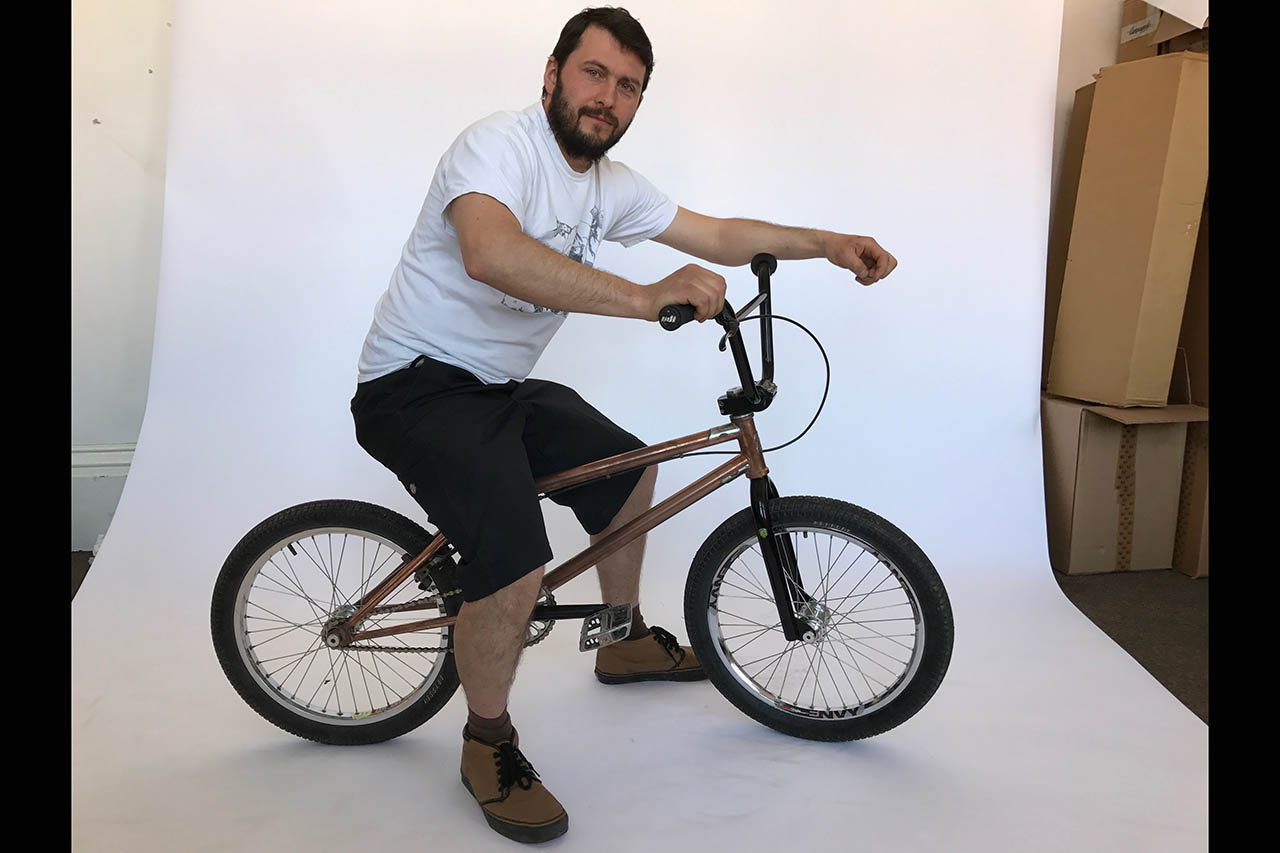 The next wave. There's no doubting the talent of award-winning builder Ted James.

In recent years, The Bicycle Academy has grown from just teaching framebuilding, to also designing and creating tooling under the name Academy Tools to support their newly graduated builders. Their new, low-cost, £850 framebuilding jig started shipping to customers earlier this year. This lowers the barrier of entry for people getting into the trade. But that’s not all: the new laser-assisted alignment system developed by TBA for release at the show (patent pending) is poised to be a game changer. By utilizing lasers to establish alignment between frame elements rather than the accuracy of the tooling itself, the system allows for more versatility in a builder’s set-up.

Also new to the game in the last year or so is Bear Frame Supplies. With decades of experience in CNC machining, this brand is helping to contribute to the dialogue by designing and making frame parts in the UK (where builders would have relied primarily on Taiwanese or US framebuilding infrastructure previously).

Academy Tools and Bear Frame Supplies are still a little new to make a massive effect on this show, yet there was plenty of discussion about how this duo could change the look of show bikes and the make-up of framebuilders moving forward into the future of Bespoked. 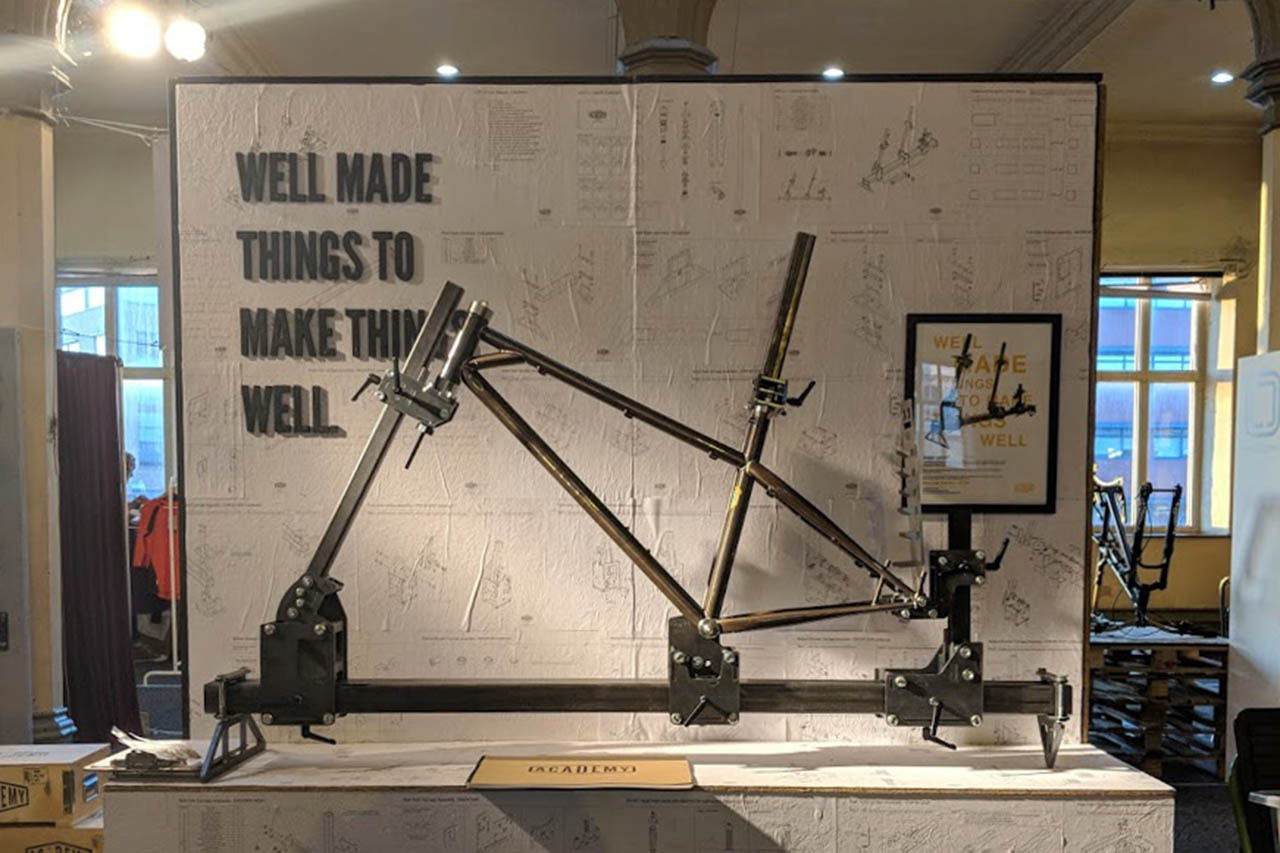 The Bicycle Academy's budget-price fixture. One of many ways in which TBA is bringing positive changes to the industry.

Whereas 2016’s show was rife with classic randonneuring, road, and gravel, this year was far more evenly distributed among cycling disciplines, and styles within those disciplines. Everything was represented, ranging across Caren Hartley’s clean and contemporary take on steel road, a bamboo bike by Calfee, a raw Curtis BMX with stacked-dime fillets, and a Robot Bicycle Co full-suspension bike with carbon tubes and 3D printed titanium lugs. 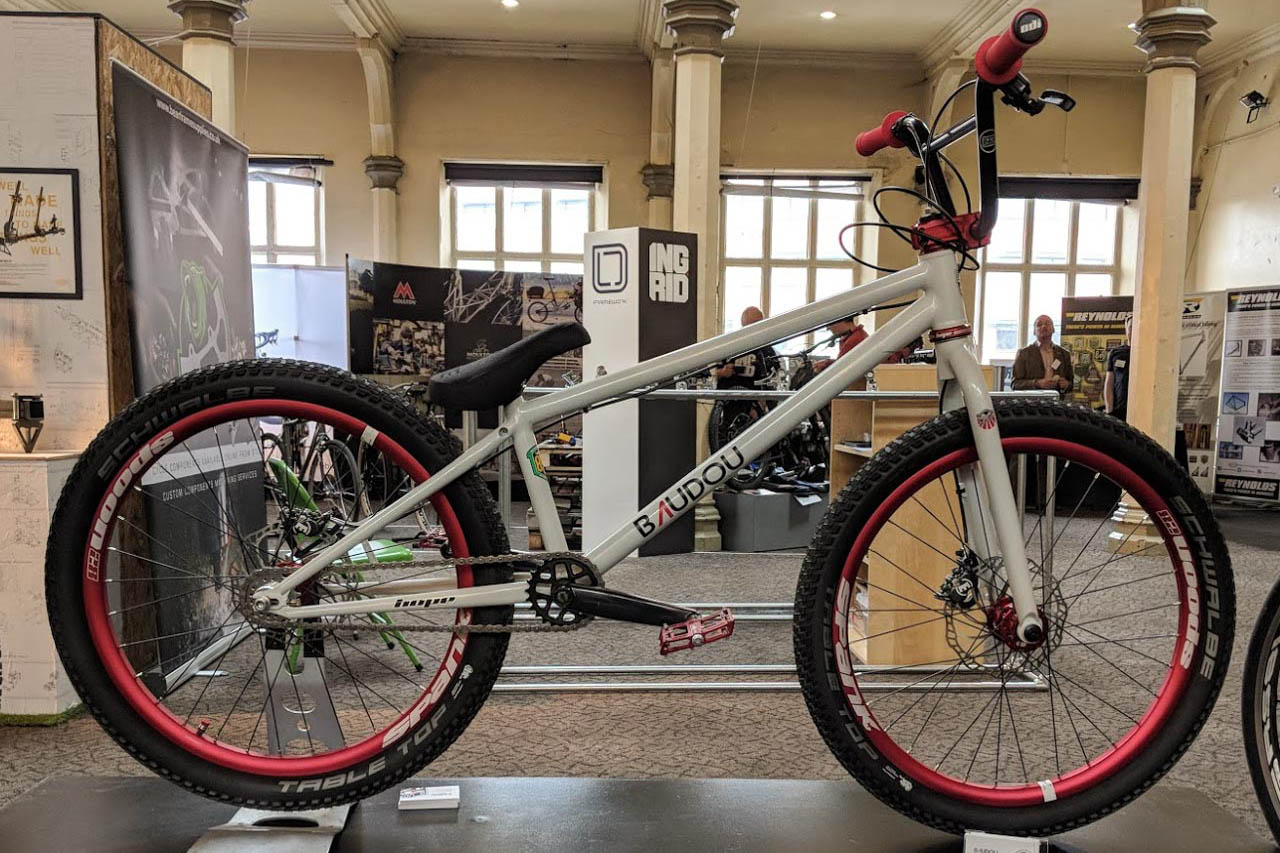 It was all there at this year's Bespoked.

The overall level of bike has improved immensely compared to those of two years ago. Improvement in craftsmanship from the new wave builders was expected with time, but what’s been really exciting is the elevation of paint and finish. Cole Coatings Workshop in particular has been cited as being an especially positive force behind the improvement within paint, and not just by setting a high bar in process and finish by example. The workshop has a reputation for inviting in other painters within the community for advice and instruction. Also, builders such as Caren Hartley (Hartley, Isen) have taken classes at the shop in order to set up in-house paint, to beautiful effect. 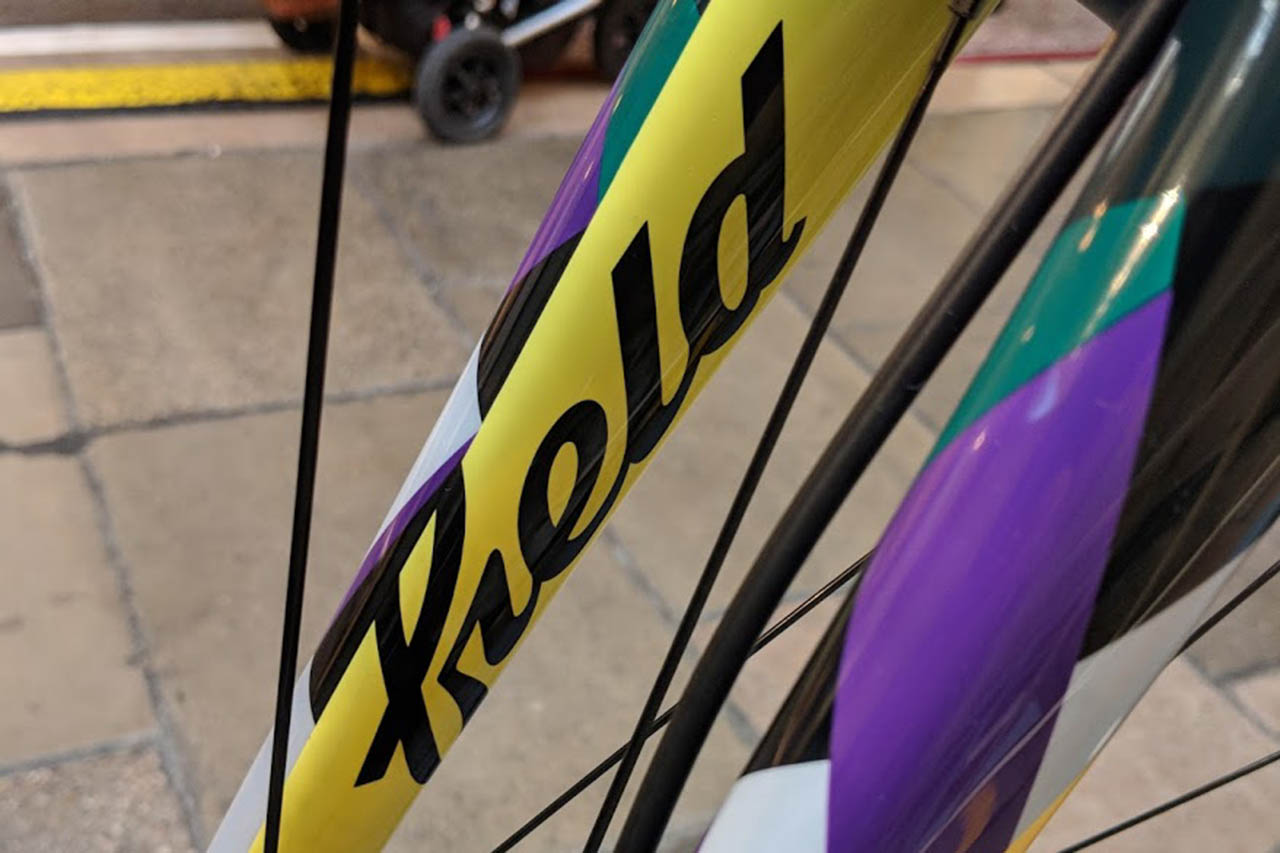 Field was one of several companies with outstanding finish work.

Overall, the show vibe was immensely positive. The adversity between more-established and new wave builders of two years ago was comparatively non-existent. Instead, I saw a lot of camaraderie across builders and framebuilding infrastructure. It seems as though the new wave and the people who have come with it have risen to the occasion and that they are being accepted within the community of Bespoked. 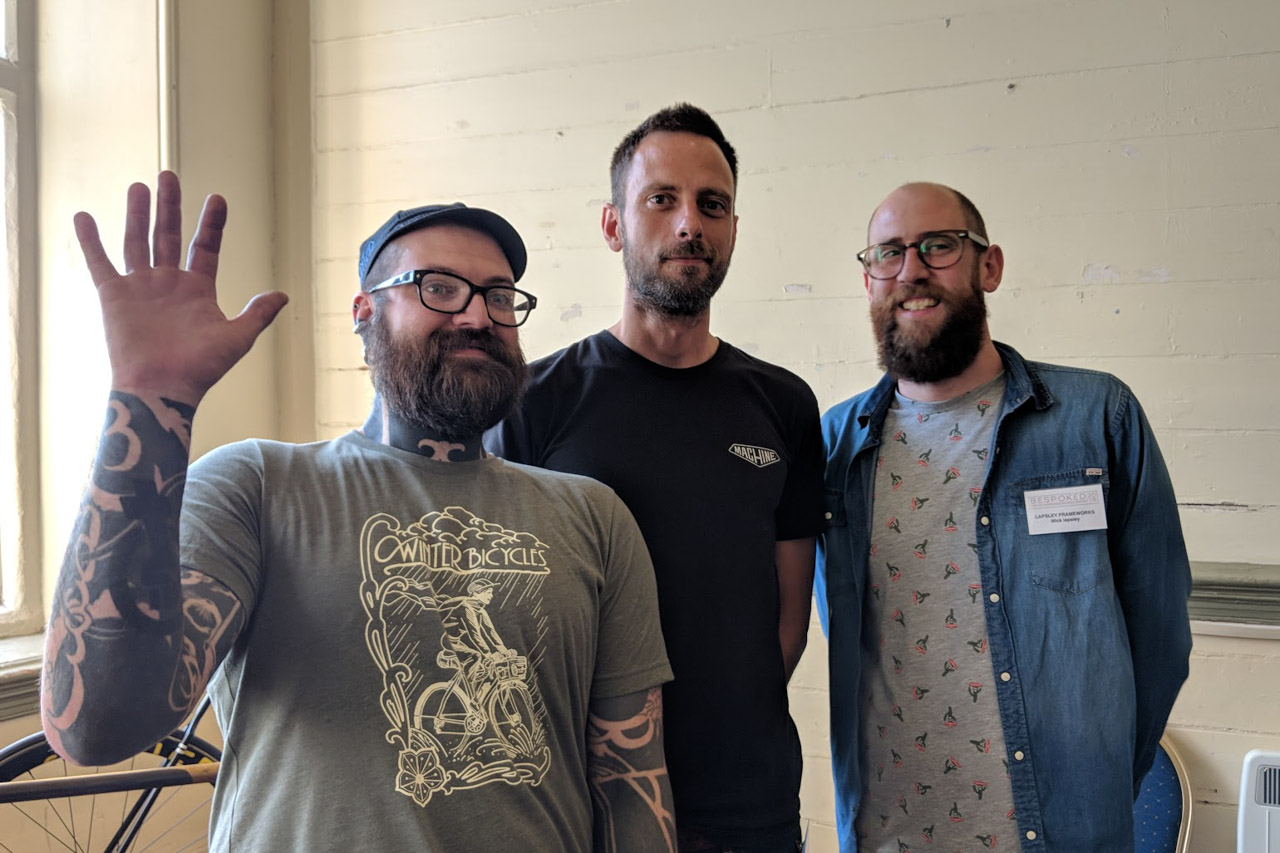 US builder and Bespoked regular, Eric Estlund (left), with a leader of the new order in the UK, Tom Warmerdam (center), and new builder Michael Lapsley

Big things are happening in the UK framebuilding community. The quality and creativity and infrastructure is growing and upping its game at an exciting rate. If the evolution from two years ago to this year (and what I’ve been told the show was in years previous) is any indication of its forward trajectory, Bespoked could quickly become the handmade show to beat.

For me, it already has become that show.