Framebuilder Mark Nobilette brought a beautiful 650B randonneur bike with him to the 2016 Philly Bike Expo that looks ready for the roads of Paris-Brest-Paris. 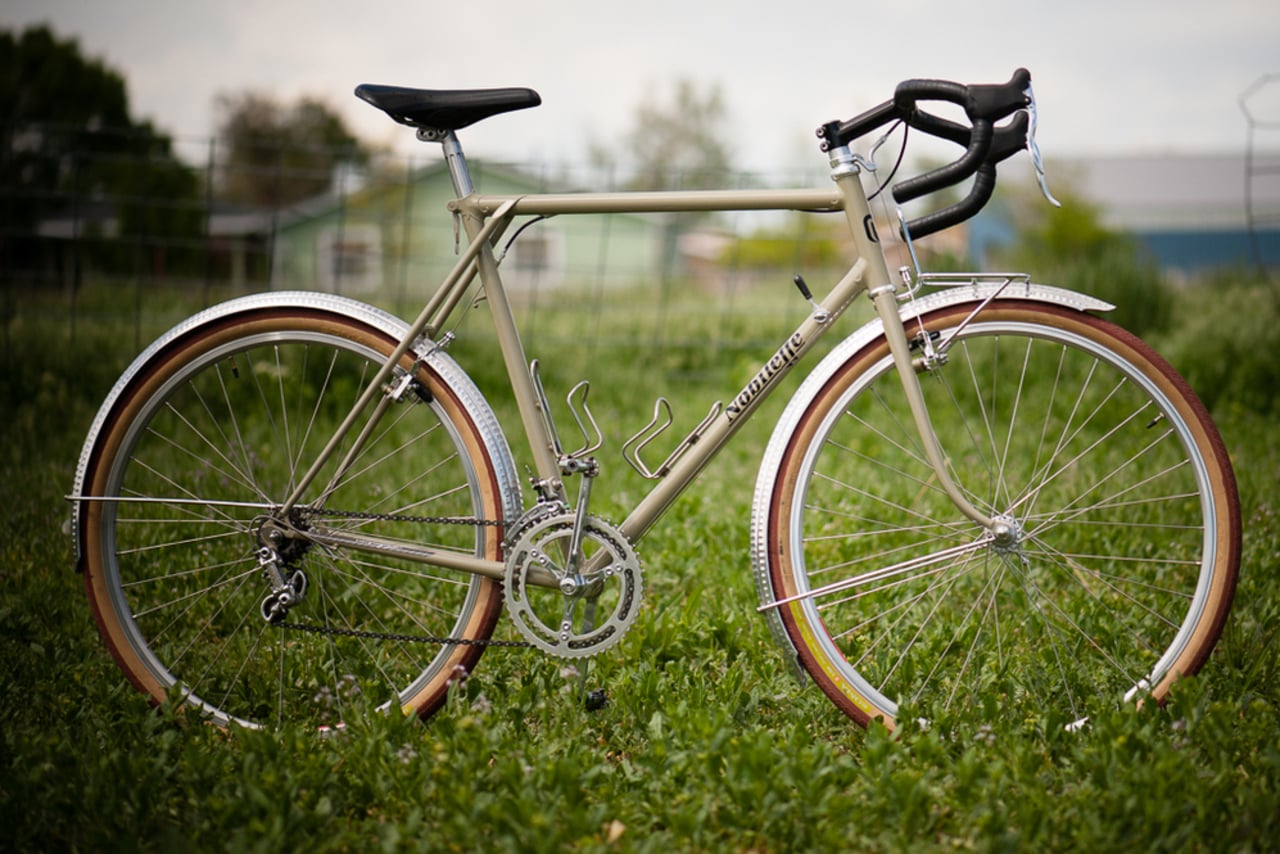 Master frame builder Mark Nobilette went to the Philly Bike Expo with a 650B randonneur show bike he’d built for himself, partly to satisfy a curiosity he’d had for a while and partly to display his considerable talents. The result is a vehicle with so many ingenious features and fine artisanship you could pore over it for hours.

“I’ve been making 650B rando bikes for a few different companies: Rivendell, Rene Herse, VeloCult: all 650B rando bikes. I’ve never owned one myself, but I really wanted one to have one and ride it. I’m not going to do rando events, so it doesn’t have lighting, and because of the retro parts the gearing is limited. So it’s a show bike that I can ride,” he explained. 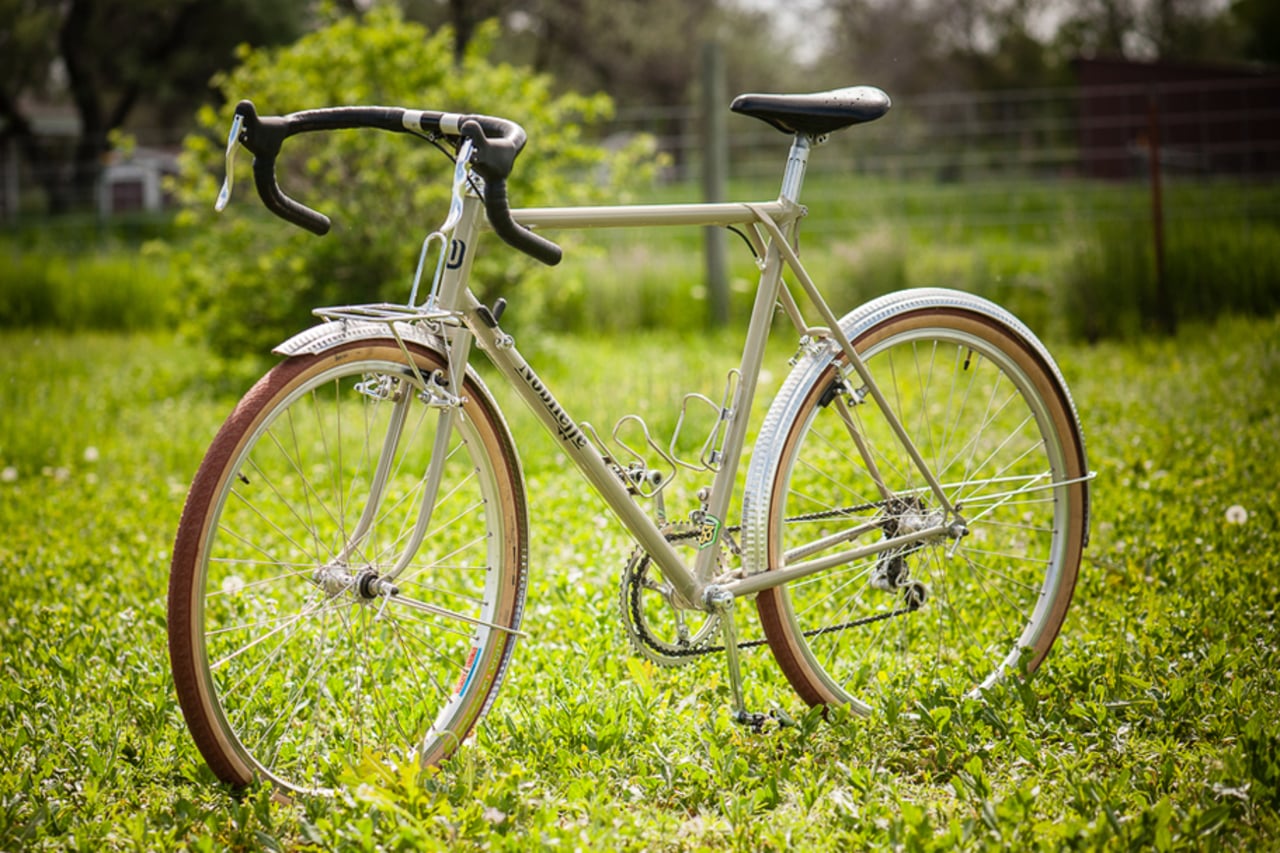 Nobilette has worked with different metals, including titanium, but mainly he builds steel frames, which he explains thus: “I believe that steel offers the best value in terms of ride qualities. Frame builders using other materials, including me sometimes, are trying to emulate the ride of steel. In my mind light-weight steel offers the best of comfort, flexibility and price. Repair-ability is a factor too.”

Introducing the concept behind the bike, Nobilette says, “It’s a tribute to frame builders from the past who have influenced me. It was built around Cinelli hubs I have owned for 40-plus years. I wanted to use components that I have raced on and admired. All the lugs and the bottom bracket shell are hand-made.”

Wheel adjustment on this rando bike is unusual and very clever. “I modified the dropouts to use with the Cinelli hubs. I had seen a really early Cinelli frame that had an early set of Campagnolo dropouts with only one screw on one side and a short slot on the other. All of the adjustment of the wheel is done with the one screw. I used a counter-bored set screw like the original super short Campagnolo dropout that came out for a short while in the early seventies.” 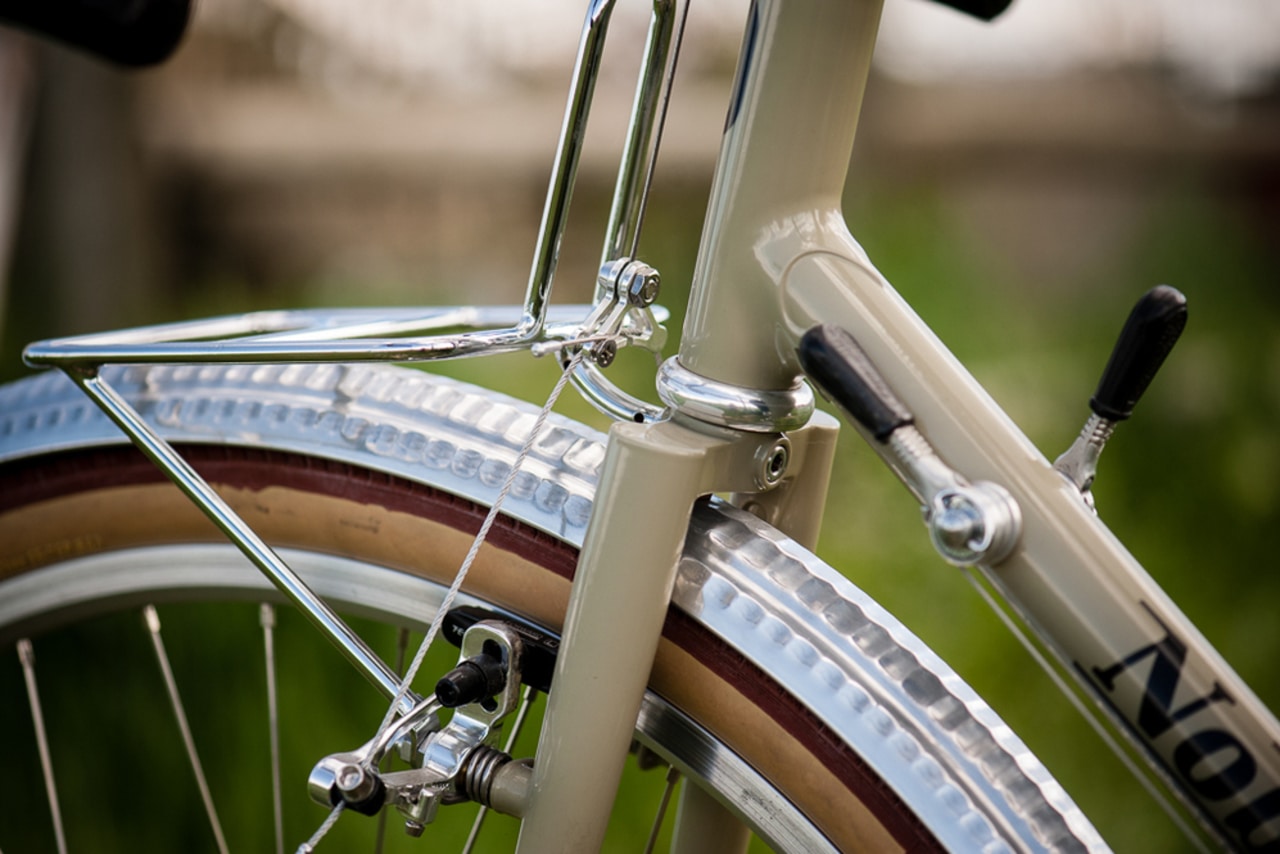 Fork crown is inspired by an Albert Eisentraut design.

Nobilette tells us the fork crown is a flat-top version of a Albert Eisentraut fork, of which he made many while working with the California master. The head tube is a modernized one-piece unit reminiscent of those used by Alex Singer. Nobilette cut it to a shape obtained from his friend and former Masi employee, Shane Dawson. The bottom bracket cable guides are inspired by former racing friend and frame builder, Peter Johnson.

The elegant seat stay attachment, wrapping around the top tube is a design that pays tribute to French builder and randonneur Jo Routens. “I had to think about it for a while,” says Nobilette. “The caps are parallel as you’re sighting down the tube. I had to make a plate to wrap around the tube. If you didn’t do what I did, it would be very difficult.”

Nobilette makes many of the frame’s components in his own workshop, in Longmont, Colorado. He makes his own small screws, and most of his braze-on parts. He makes bottom bracket shells for tig and fillet-brazed frames, and says he’s made lugs, crowns, dropouts and just about anything else, including decals, that can be used on a frame besides the tubing. 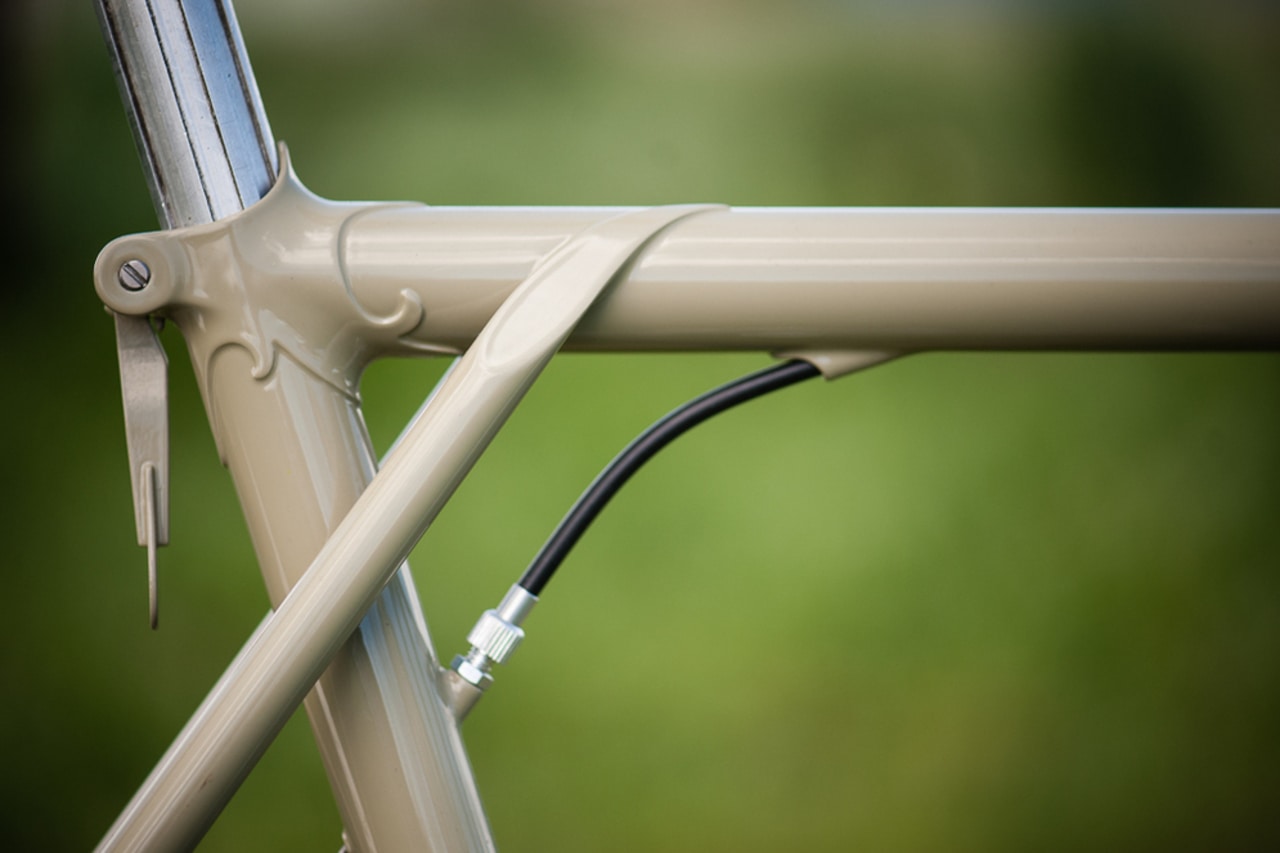 The Campagnolo steel Gran Sport crank is a lower-end product that came out in the early 70s. “I’ve had it for years,” says Nobilette. “I felt like it really fit this frame, it really goes well with it. Somebody told me at the Philly Expo that there are some rings you can buy to fit that crank now, I’ll have to find out who sells those.” 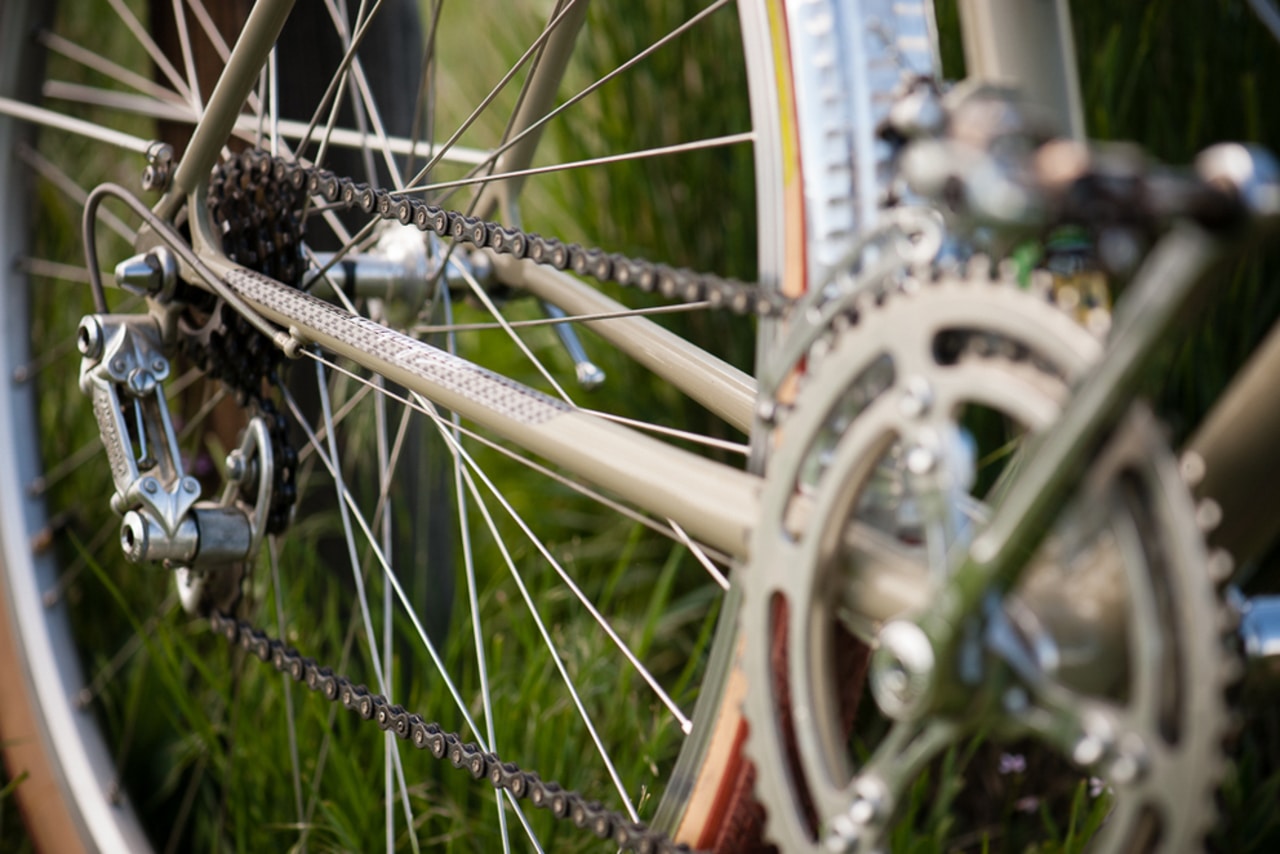 A Tektro cantilever fitted conveniently to the fork/front rack assembly for front braking, but at the back clearances issues required a custom solution. Nobilette ended up machining the brake arms and adjuster mechanisms from scratch, based on a Shimano design, then used Shimano hardware to mount the brake blocks.

The seat binder, inspired by Rene Herse, incorporates Nobilette’s own quick-release design, which he’s been using for about 35 years now. This works like a turn-buckle, with left and right-hand threads. The arm is like a socket wrench with a clamp screw that can be turned on a hex piece on the threaded part. When open, in the up position it spreads the binder, and when closed in the down position the seat is clamped fast.

Having had a long and distinguished career in frame building, Mark Nobilette says, “I enjoy making bikes like this now. I’m not concerned about trends or fads in the cycling world, at this point in my career I want to make what interests me and shows my manufacturing/artistic abilities.”

This machine is a bike geek’s paradise, and looking at the scope of the artisanship embodied in every aspect of it, it’s easy to see what all the fuss is about when people speak of Nobilette's considerable talents.