Through his experience with Speedvagen, road pro Christian Meier has learnt that custom builders play an important role in the high-end destination cycling venues and retail/ride experiences that are starting to sprout up. 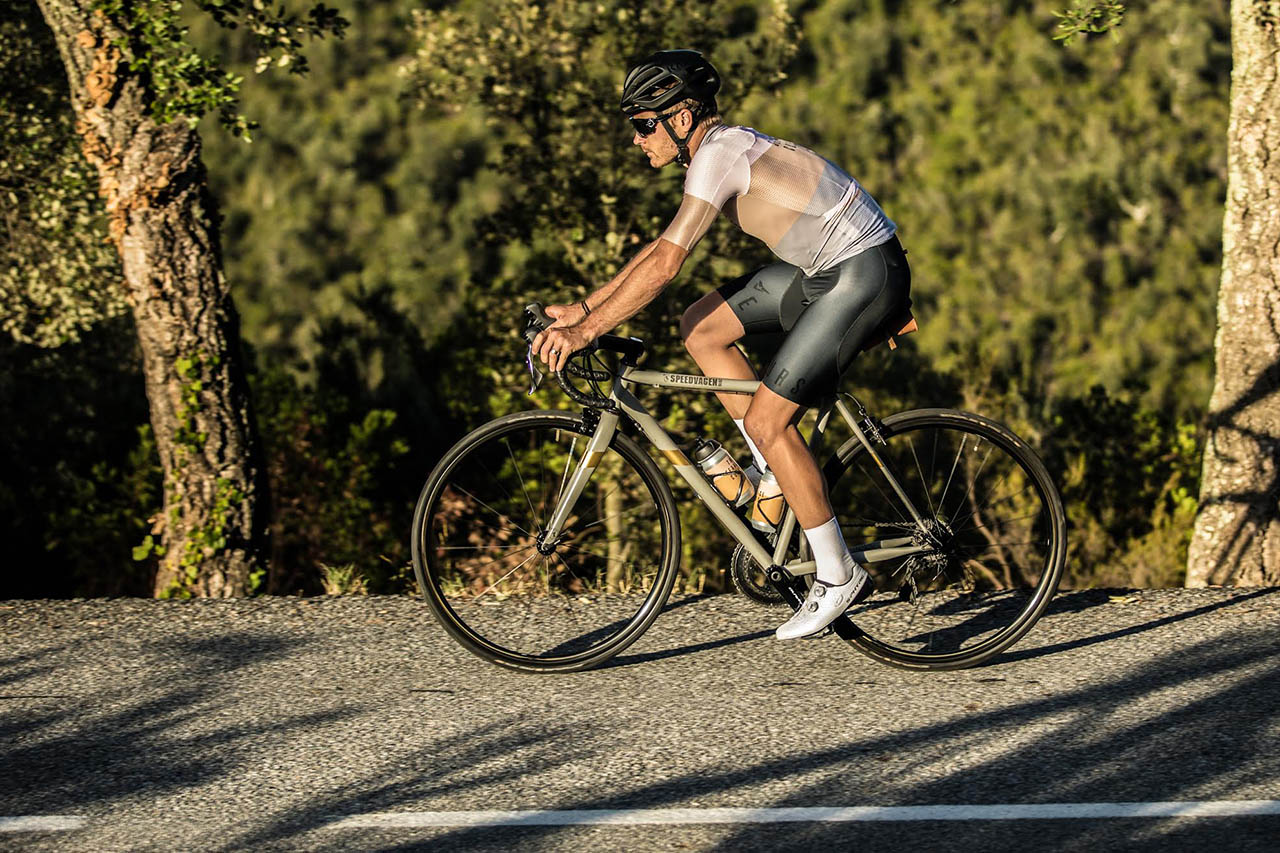 Former Orica Green Edge pro Christian Meier believes that while there is still a place for mass produced carbon racing bikes, there’s a lot more to the cycling experience than the mainstream offerings commonly found in bike shops. “What I am really starting to find is that there are many people who are not racers that could be enjoying a much nicer cycling experience with a steel bike made for them,” says Meier.

His new cycling business, The Service Course in Girona, Spain, is an immersive cycling experience with a retail storefront. From September 5th–11th this year Sacha White of Vanilla and Speedvagen fame will take seven days here, the longest stop on his forthcoming European fitting tour.

Christian Meier retired from pro bike racing at the end of the 2016 season with a year of his contract still to run. His wife, Amber, had been working hard on their post-racing career projects and the new life was calling him. They had already opened two coffee shops in his adopted home of Girona, Spain, and plans were well advanced for The Service Course. 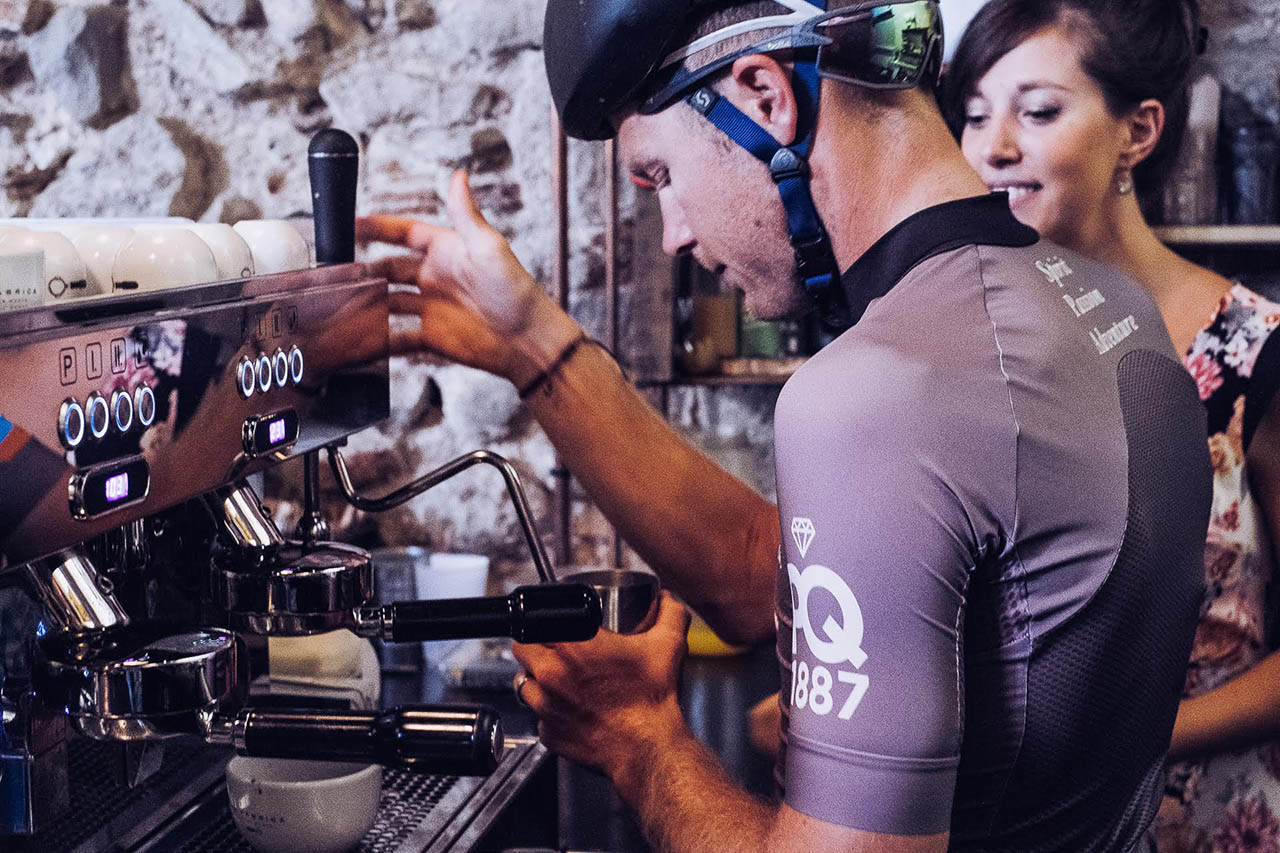 While his pro racing days may have been coming to an end, Christian still had the cycling bug and he knew this would stay with him. To make the most of his home location in one of the world’s finest cycling regions, the first matter of business had been to exercise his forthcoming right to ride any kind of bike he wanted whenever he wanted to. He ordered a Speedvagen.

“Many pros don’t touch a bike for years after their career, but for me the passion for cycling was still there. I love riding, following the races, and watching the trends. I gravitated toward a steel bike. I’d heard lots of people say really good things about steel, I didn’t have much experience with it but I wanted something different (to what I’d been riding).”

Exactly what, though, was not immediately clear. As Christian explains, many pro cyclists are encouraged to focus solely on physical and mental condition, while leaving the bike to the team mechanics.

“I’m embarrassed to say that after 15 years or more of riding, 10 years as World Tour rider, I didn’t know a lot about bikes. As pro racers we’re not engaged about bikes, geometry, fit: it’s a stock world. We’re riding stock standard bikes, bar one or two guys for particular events. You’ll change the stem maybe, adjust the seat some. We were more concerned about the weight than anything.

“I looked around at different builders. I was really attracted to Vanilla and Speedvagen, but I didn’t go with the first bike that I liked, so I kept on researching. A friend with experience in the bike industry said a reputable builder will make you a good bike, and the rest of it comes down to design sense, philosophy, feeling of the brand, things like that. I continued looking around, but kept coming back to Speedvagen."

His search began well before his final pro race. Like many people ordering a custom bike, Christian needed a lot of time to consider the design features of the new bike he would be getting.

“We were at a race when I signed off on the final design. It was the Vuelta Burgos in August 2016. I was hanging out with Simon Yates and I was bugging him all the time with my design ideas!" 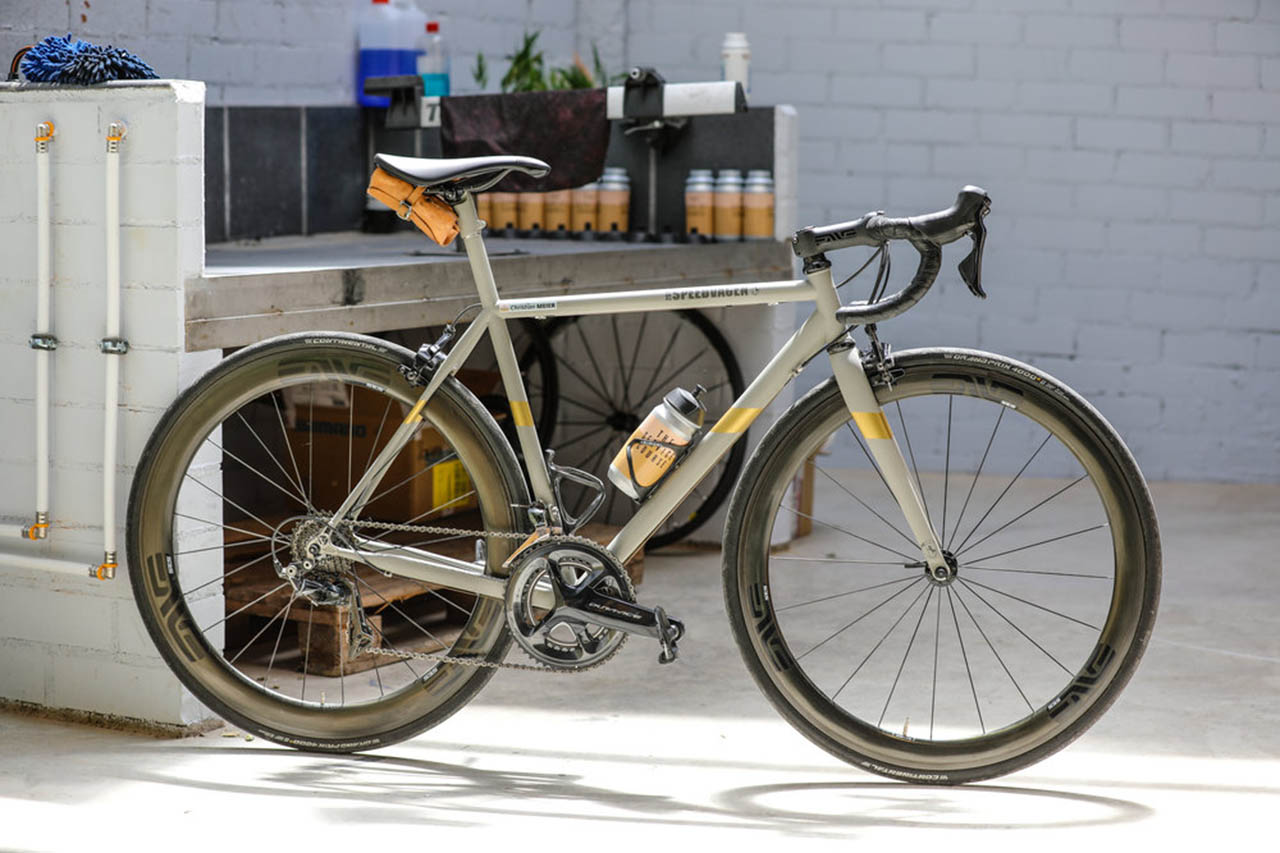 The process had awakened him to one of the most interesting adventures for cyclists in the custom market.

“Now I am starting to realize how much you can change and work on with a bike. This has opened up a whole different bike for me. Now I’m interested in geometry, there’s a lot out there. And you can race a steel bike. You maybe don’t know that as a pro. ”

The race oriented approach of Speedvagen was a good match for Christian's road-pro riding senses. Sacha White had personally verified his riding position at a fit clinic, but as with most custom builders working with experienced cyclists he’d also taken measurements from the existing bike.

Since UCI World Tour riders benefit from the services of fit experts like Andy Pruitt and Todd Carver, White found no changes were necessary in Meier’s position, and on arrival, despite the distincly different ride quality of a steel frame, his shiny new Speedvagen felt both familiar and comfortable the first time he rode it.

Meier advocates a proper fitting session, particularly for those relatively new to cycling or those returning after some years, both of which are less likely to be correctly fitted to their bikes. 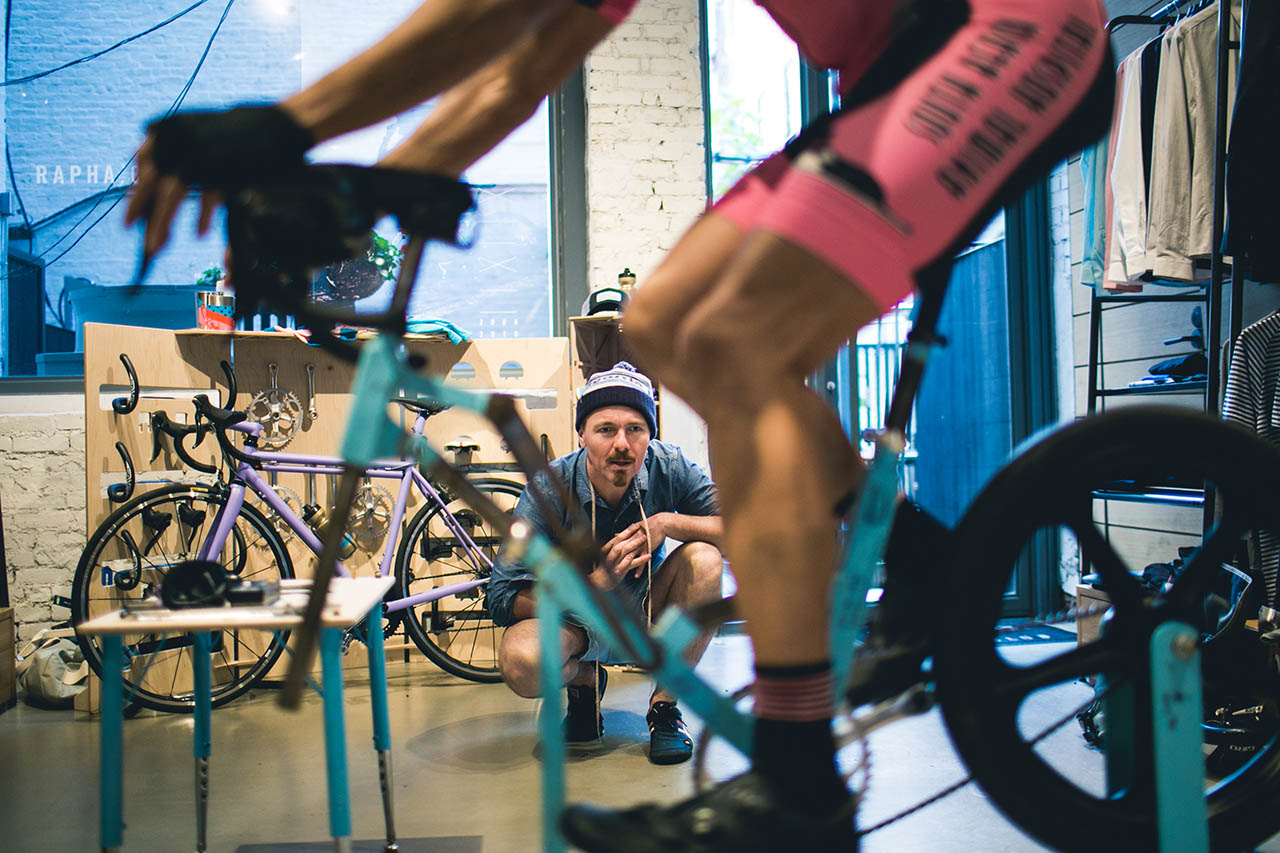 “Getting fitted makes sense for non-racers, there are so many people coming into the sport, they have no experience," says Meier. "They’re buying bikes that are aero race bikes, they’re fitted for a race position. Then they get a sore back and think that’s cycling. What we’re doing is helping cyclists get more from their experience."

Christian was so impressed by his Speedvagen he decided to purchase a small fleet as rental bikes for his Service Course business.

The seeds of the idea behind The Service Course were sown during Christian’s time with Jon Vaughters’ Garmin team, before his Orica years. “Garmin’s service course is in Girona. We were encouraged to come to Girona where their team staff were better able to support us. In other parts of Europe we'd have been on our own. But shortly after arriving in Girona I thought ‘This is the place for me.’”

The city of Girona has a population around 100,000, and is situated in the northeast corner of Catalunya, about halfway between Barcelona and the French border city of Perpignan. It is about 15 kilometers from the Mediterranean Sea and is surrounded by hills, although there are flatter routes following the River Onyar to the coastal plains. Most of the year the weather is dry with a temperate maritime climate. A resident population of professional bicycle racers numbers almost 100. Apartments there can be rented for as low as 500 Euros a month. It is little wonder the city has become one of the premier destinations in the world for cylco-tourism.

“The roads around here are perfect for riding, there’s everything. Some flat on the coastal roads, rolling hills nearby with 1-2km climbs. Within an hour’s ride there are 8-12km climbs with a thousand meters vertical gain. You could do a week here without riding the same roads twice. Car drivers are very respectful. Sport is a big thing in Girona. Trail running is really big, and most people ride. About 10 minutes out of Girona there’s very low traffic. 98 percent of time you can ride two abreast.” 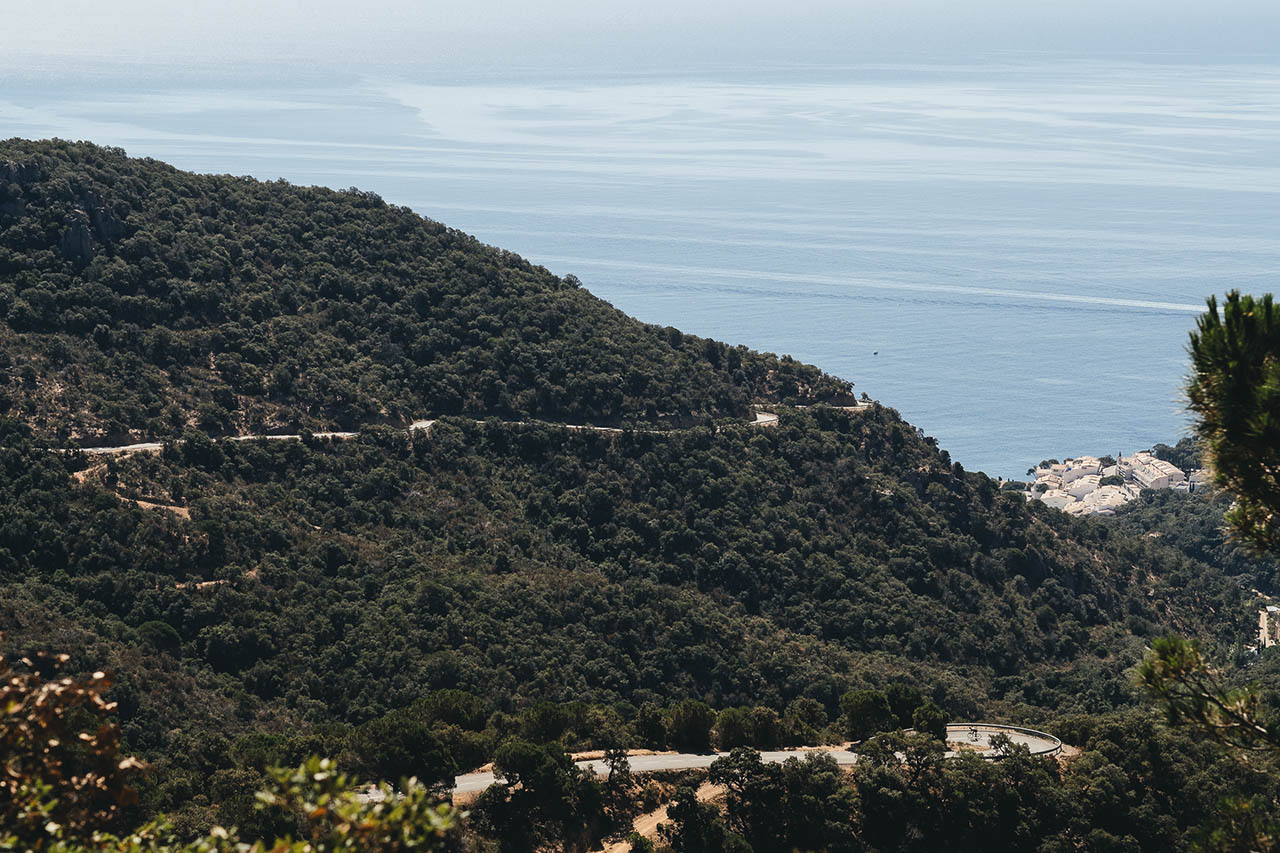 Coastal roads of the Costa Brava near Girona are as fun to ride as they are scenic. Photo: Scotty

Conversations with cycling customers in their cycling cafes La Fabrica and Espresso Mafia helped Christian and Amber crystalize the business idea for The Service Course.

“They were asking for services that weren’t being offered locally. Essentially they were looking for an upgraded cycling experience in Girona. Think about it, North Americans, Australian, Asian people don’t usually get so much holiday. So if you only have a week here, you want to maximize it. Get quickly from the airport, be set up and riding on the really good routes without spending a day or two getting oriented. Some of our UK and Scandinavian customers are looking for a weekend experience. Fly in Friday night, ride Saturday and Sunday then fly home Sunday night."

“Rather than having to pack, unpack, then re-pack your own bike, you can just rent a super-nice bike here. All our bikes are fitted with Dura-Ace parts and Enve wheels. We provide everything here. Lockers, showers, laundry. We have apartments for rent with nice beds, there are really good restaurants, it’s all here. People can find everything on our website.” 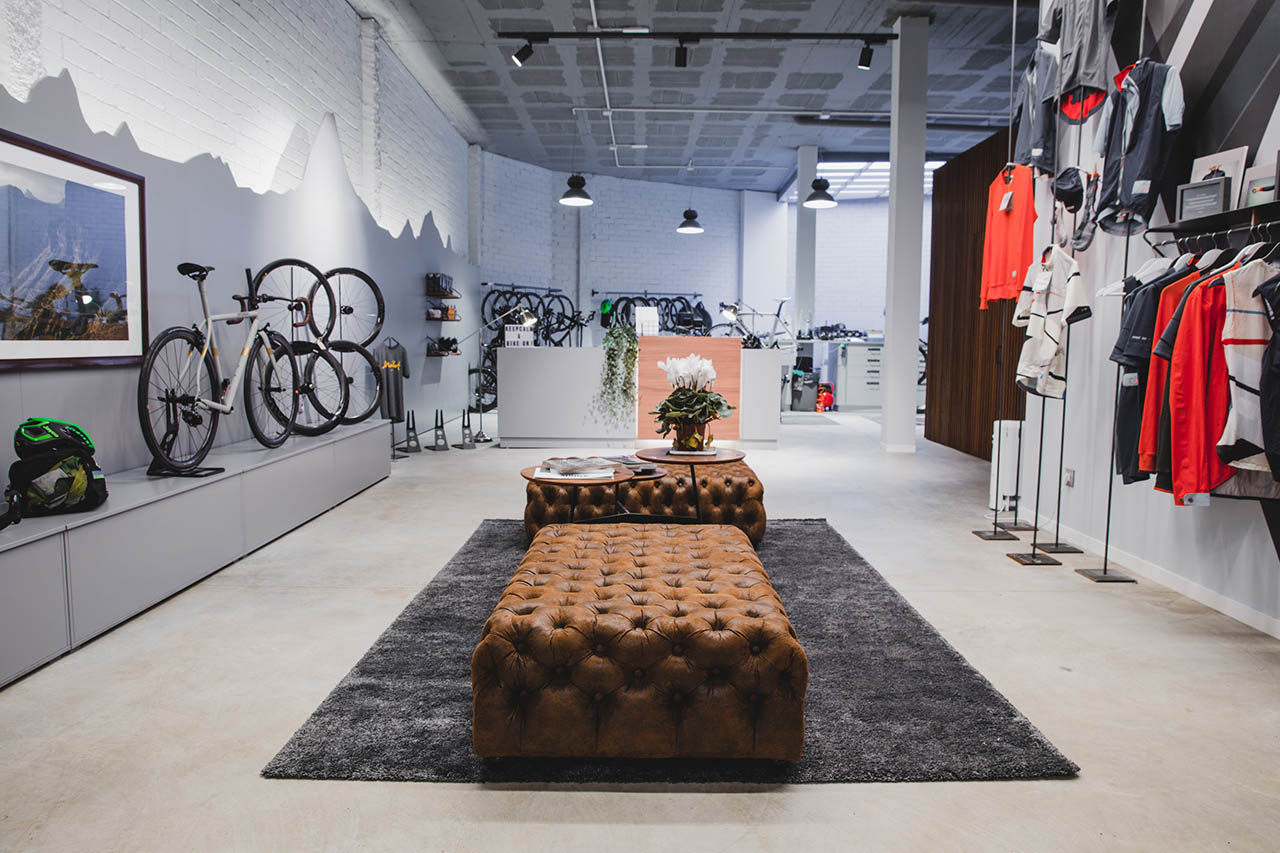 The elegant interior of The Service Course hints at the detailed approach of Amber and Christian in providing an excellent experience for the discerning cyclist.

Service Course aims to increase the interface between people that are employed in the world of pro cycling, and keen amateur and recreational cyclists. Drawing on relationships and contacts built up during his pro career, Christian is planning rides and workshops with pro racers, team chefs and a range of other experts, including Sacha White. White owns the Vanilla Workshop, which produces Speedvagen and is one of the most highly regarded cycling manufacturers in the world.

Speedvagen’s European Fitting Tour arrives for six days in September at Service Course after stops at Rapha clubhouses in London and Amsterdam. The Service Course will host rides, fitting clinics and discussions about steel framed bikes in a variety of applications. People ordering a Speedvagen are invited to these clinics to be fitted by White, while all cyclists are invited to join rides, clinics and discussions.

Christian Meier was a popular rider in the pro peloton and he wouldn't trade those years for anything. Yet one gets the feeling in conversation with him that he couldn't be more enthusiastic about this new relationship with cycling that he is stepping into. “I am passionate about this project. I truly believe that more people would benefit from riding a steel bike, but what I am really starting to find is that there are many people who are not racers that could be enjoying a much nicer cycling experience with a steel bike made for them. Our aim is to help educate people on the benefits and also the misconceptions, and promote the passionate builders out there that are putting in incredible amounts of effort to produce a quality product," he says.

Having stepped out of the mainstream and being delighted by what he found, Meier is now introducing others to the industry's finest treasures, as yet undiscovered by so many cyclists.