Keith Noronha: Prices, standards and the rollercoaster ride of tubing manufacturers - part one

Reynolds managing director Keith Noronha, a veteran in the bicycle tubing industry, discusses issues at play on both sides of the Atlantic. 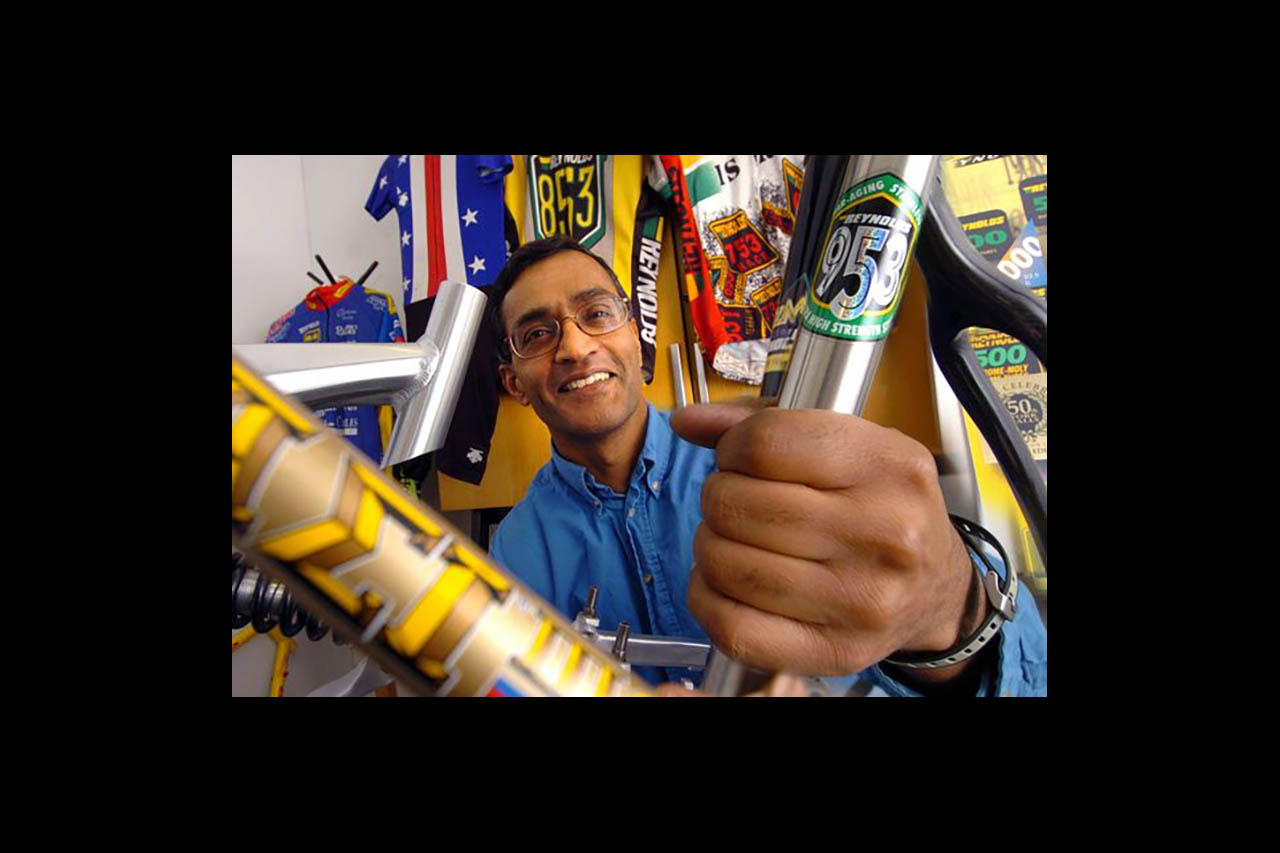 KN: We do actually operate volume tiers, so for example, 1-5, 6-10, 11-49, 50 plus, then we go all the way up to the 5,000 level for what I call OEM. So we have very much a graduated structure, and like a number of businesses, obviously the volume matters so we look at an overall package, etcetera. The comment about the new builders, I did see Richard Sachs's comment there, I was kind of mulling that over in my mind as well. Because I no longer live in the US, I don't know what you guys see on the ground there, but what I see in the UK is a lot more interest in biking. The result of that is a lot more people are interested in having bespoke frames made, and a number of guys have set up training colleges to basically learn to build your own frame. Most of these people will be simply interested in building a bike for themselves or something like that. They'll only spend a week or so, but a pretty intensive week, to build a bike, and a few of those have graduated and thought “I'd love to set up a business” and you'll see some of them showing up at places like Bespoked.

We at Reynolds will offer our tubes to anybody. We've worked with guys like Phil Taylor, the Frame Builder's Guild suggestion, where they're trying to improve the overall standard for frame builders. They'd require EN testing, European Norm, fatigue testing. This could have been the equivalent of the old Reynolds 753 in that a particular builder could have picked a standardised set of tubes, build a frame, get it through this EN test and that kind of proves they're capable of making, let's call it, a safe frame. Obviously the aesthetics and all would depend on the person but that could have been a graduate level stating 'I can achieve that'. Some people, and these have been established people, have asked why would I need to do that? I've got the skills, I've got the geometry and all that - as you know there's a lot more to frame building than just being able to build a frame that passes a fatigue test.

My overview is: companies like Reynolds, we do sell to various people. We try and give some people advice, but we certainly will ask them... If somebody for example says 'I'd love to build a 953 frame,' and they've never built a frame before, obviously we'll tend to guide them to the thickest materials, the ones that are going to be the most forgiving, so if they're going to start out, that's the way they should do it.

How they progress to becoming professional frame builders, the industry doesn't yet have a standard. It's not like a graduate degree or a particular certification, but I think certainly the UK guys are trying to set something like that up. Phil Taylor at Bespoked would have comments on that, and certainly a number of frame builders want to do it. Personally I think that would help people understand how their frames match up in terms of the EN test. That is what the OEMs do, and we think that's a very good thing to do.

But I'd be the first to say, obviously there are standards around the world, if somebody is setting up to build commercially they've got to learn what's required. And from the professional capacity, just like an engineer, you've got to know that what you do is acting safely and taking due care and actually doing some of this preliminary work to get your frames through an EN test or it's equivalent, and I would have thought should be something that professional builders think about. 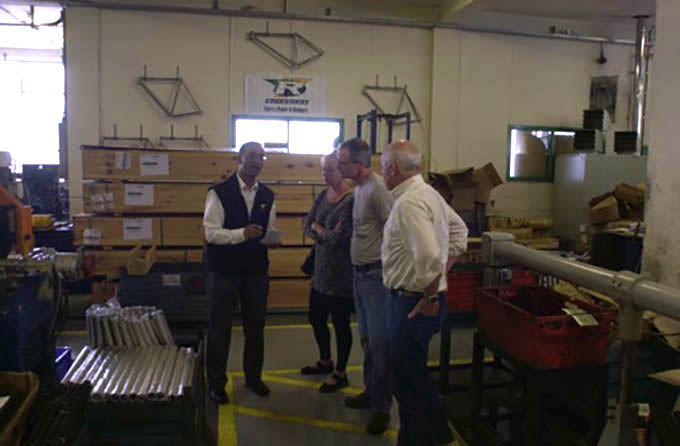 PS: Looking at the US market, I could see some potential liability issues for tube manufacturers issuing tubes to inexperienced builders who, say overheat and weaken the tubes, they break and then you get dragged into a lawsuit.

KN: Absolutely. Going back to Reynolds 753, when Reynolds introduced that in 1976 it was the first heat-treated tubeset of its type. The issue with heat-treated frames, as you know is if you overheat the joint - and these would have been lugged frames by a long way - you effectively anneal and soften it, so you could end up with a worse frame set in terms of strength, compared to a standard 531. Which is why Reynolds, when launching 753, had this certification process where a test kit would be sent out to builders, they'd all have the same frames, they'd build up a kit, send it back and as Reynolds back in the old days under the corporate empire, we'd slice that joint up, check the penetration, check the hardness and basically see if they'd over-heated the joint. We'd only ship to builders who had passed that certification.

Things have moved on in the past 30 years. Now most builders have dealt with heat-treated tubes anyway, some of the tubes now, in fact a lot of the builders, are TIG welded and the comment we would make is: make one standardised tube set, pass it to ten different builders and presumably get ten different results. Even though we know a tube set like 853 has gone through a lot of testing through OEMs, some of the frame builders could actually fail with that. Even though they are using tubing with a specific thickness they might not have the fabrication skills or have not correctly prepared the tubes, or even got the geometry wrong.

With product liability where it is now, to me, partly because of what we see in the international markets, the EN testhas become part of an ISO standard now, ISO 4210, those tests are pretty rigorous. When they first came out we jokingly wondered if Eddy Merckx's 531 frame would have passed!

To us it seems a pretty good international benchmark, because whether the EN test is done in the States or Germany or England effectively they're following the same standard. That's the standard that a lot of guys in Taiwan would apply, and for example, Jamis or Kona, when they specify a frame, almost certainly their frames made in Taiwan, the product managers would expect it to pass the EN testing regime with fatigue testing and lateral load testing before they would sign off the production of the frames. Even though it was European, it became the kind of standard, because it was such a high standard even the Americans would have accepted it in their market. And I think the fact it's now become the ISO standard, I think has made it much more international.

The link there is when we in the UK were talking about the Frame Builder's Guild, there is a test center called Bureau Veritas in Manchester, England. For example when Reynolds bring out new materials we work with a couple of builders to test the material and one of the first things they'll do is build a frame, send it off to this test house, we make sure that it will pass the EN test and that way before it's launched onto the market we know a capable builder should be able to pass the EN test using our new materials.

PS: You have plenty of experience working in the USA. Can you see a standard like that being adopted here? And obviously it would need to have a different name, because they'll never accept 'European Norm' as a name here!

KN: I've heard a number of builders know about it, if you talk to Marc Muller at Waterford Precision Cycles... Forks for example, are absolutely safety critical items in our line, so very much a standard there, and Andy Newlands up in Portland, he's actually got a fork test rig. Those standards have been published and I'm pretty certain you'll already find that they operate to an EN standard, but it's probably called an ISO standard now. I know there are at least one or two test houses operating to that level in the US. The only practical issue that I'm aware of, but don't know for sure, is the US testing seems to be a lot more expensive than in the UK or Germany. I don't know if that's just to do with the test house or maybe the way it's set up.

PS: Do you know what the prices are?

KN: I've got to be careful giving (out wrong) prices! But in the UK it will be well under a thousand dollars, from the figures that we see, but I've heard some pretty high numbers within the US. For a UK or a European builder to get their test frames done, it would be commercially viable to have their work tested. In the Frame Builders Guild we were aiming at certification as part of a tiered membership structure. The idea was increasing the recognized standards for professional builders, which would help separate out what I would call the novice builder from somebody who is planning to build commercially.

PS: In general you're comfortable selling to an unsupervised novice builder?

KN: We usually have a conversation to determine what level they are starting from. We've had guys who've been motorcycle frame builders who are now planning to build bicycle frames. Others come from an aviation background and although they've never built a bicycle frame they have a very high standard of welding skill. So my point is, it's a free market. It's not just money, we at Reynolds won't just say: 'you can't buy from us,' what we tend to do, as I said earlier, is persuade people to start with the biggest, heaviest set. We always recommend these guys test what they're doing. But some of these guys are buying tube sets because they're going to attend a course in frame building. Some of these schools in England are fully booked for months ahead. As Reynolds, we are happy that people want to do something like that anyway. Call it a hobby, but if somebody wants to spend two weeks of their own time and money learning how to build a frame for themselves, we think that's a great idea.

The overview I have, having been involved with Reynolds since 1988, we've always had a rollercoaster ride in terms of tube manufacture. I'm sure it's been the same for TT and Columbus. What I feel encouraged about is we're seeing new faces come in with great ideas, some really artistic frame building. And NAHBS, Bespoked, these very much mirror their regions, and the fact that people are starting from scratch, or taking a risk in livelihood and decided to turn to frame building, to us is a very good sign of where handbuilding could go. But this need to continually improve standards, like any new professional organisation, in a way. I'm a chartered engineer. That organisation started more than a hundred years ago, but gradually they've been increasing the standards required to be a chartered engineer. The same thing is going to apply to frame builders. We've got to make it easy though for people who have relatively little knowledge to have access to what the best builders do and raise the standard for the entire industry.

End of Part One. Part Two.