The handbuilt bicycle community has lost another renowned figure with the passing of Roland Della Santa on May 4th.

The close-knit handbuilt bicycle community lost another well-respected and renowned member recently. Frame builder Roland Della Santa was found dead at his home in Reno, Nevada on the morning of Saturday, May 4th. He was 72 years old.

As with many master craftsmen, Della Santa’s skills as a frame builder developed from humble origins and were born of necessity. He learned to braze in high school metal shop class, and was later working in a bicycle shop when the owner decided to try his hand at frame building.

Della Santa jumped at the chance to help with what he called a “six-month project.” He built his first frame in 1970, but considered himself a hobbyist until 1976, when he began building full-time after returning from a stint in the Navy.

In those early days of the US artisan bicycle making scene, the supply chain was not as robust as it is today. As such, Della Santa built frames from whatever high-quality materials he could get his hands on, including steel tube sets from Columbus, Reynolds, and even Vitus.

Whatever company supplied the tubes, Della Santa only built frames from steel. He considered it the finest material for building a bicycle.

He thought of bicycle frames as a spring, and the finest springs are made from steel. Carbon fiber may be lighter, but it often snaps at the same point where steel will rebound.

Della Santa also built his own forks from steel. He wasn’t a fan of aftermarket carbon forks, because he thought of the frame and fork as a paired unit. Each fork needed to be tailored to the frame, with the fork rake being complementary to the head angle to get the proper trail and handling.

Della Santa was an accomplished bike racer (he held a national record for the 25 mile 2-man time trial), and his early customers were other members of the nascent, 1970s U.S. racing scene. 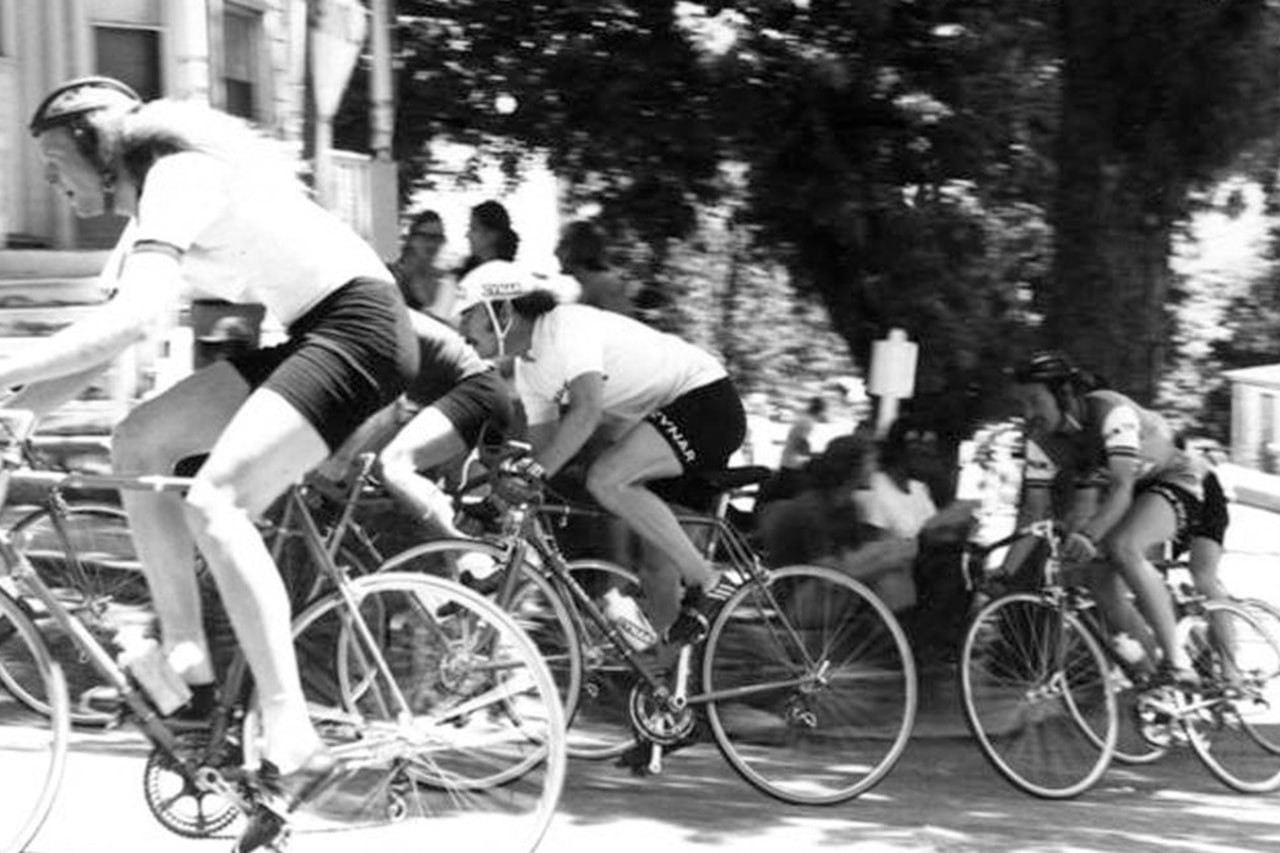 In the thick of it, Della Santa, center, already in the small gears starting a climb. Photo: www.dellasanta.com

His famous clients included track cycling legend Jack Simes, but he is best known for helping introduce a young Greg LeMond (another Reno resident) to cycling. LeMond was a ski racer at the time, and was looking for ways of maintaining and building fitness in the off season, so he and his father joined a local bike club.

It turned out that Greg was a natural, and Della Santa became his sponsor in 1977 and 1978.  For most of the following 17 years of his storied pro career, LeMond raced on steel frames built by Della Santa that displayed the marques of LeMond's various team bike suppliers.

In a story published in Bicycle Retailer and Industry News, LeMond related the influence of Della Santa on his cycling successes.

“Roland had a big impact on my career. Really when I was 16 I had no clue what pro cycling was - I showed up at my first race in a yellow jersey, I didn't know you're only supposed to do that if you won the Tour de France. But I rode to Roland's house weekly. He had a living room that was maybe 20 feet by 20 feet and he'd have this huge stack of European racing magazines. That's the first time I saw pictures of the great races and the riders and it got me hooked. So Roland was probably one of the biggest influencers on my career," said LeMond.

Indirectly, Della Santa's most famous client is actor Dustin Hoffman, to whom Greg LeMond gave one of his Della Santa-built bikes. Hoffman was at one time the star of a planned feature film based on Ralph Hurne's 1973 novel, The Yellow Jersey. Although the project came to naught after 15 years of planning, Hoffman visited the Tour de France in the mid-1980s and met America's rising star cyclist.

In recent years, most customers who had face-to-face contact with Della Santa will have done so at the North American Handmade Bicycle Show, at which he frequently exhibited and won the Best Road Frame award in 2009. Don Walker, the NAHBS founder started making frames in Sacramento, not too far from Della Santa. “II knew Roland well. We'd been friends since I began building 28 years ago. He was more than a colleague. He was my friend and somewhat a mentor, ” said Walker, whose personal collection of frames includes a Della Santa.

“In my opinion, Roland made the best lugged bikes on the planet. He wasn’t into carving lugs, a standard set was just fine to him, but what he did with those lugs was pure magic. The bikes themselves are perfectly aligned and ride amazing.” 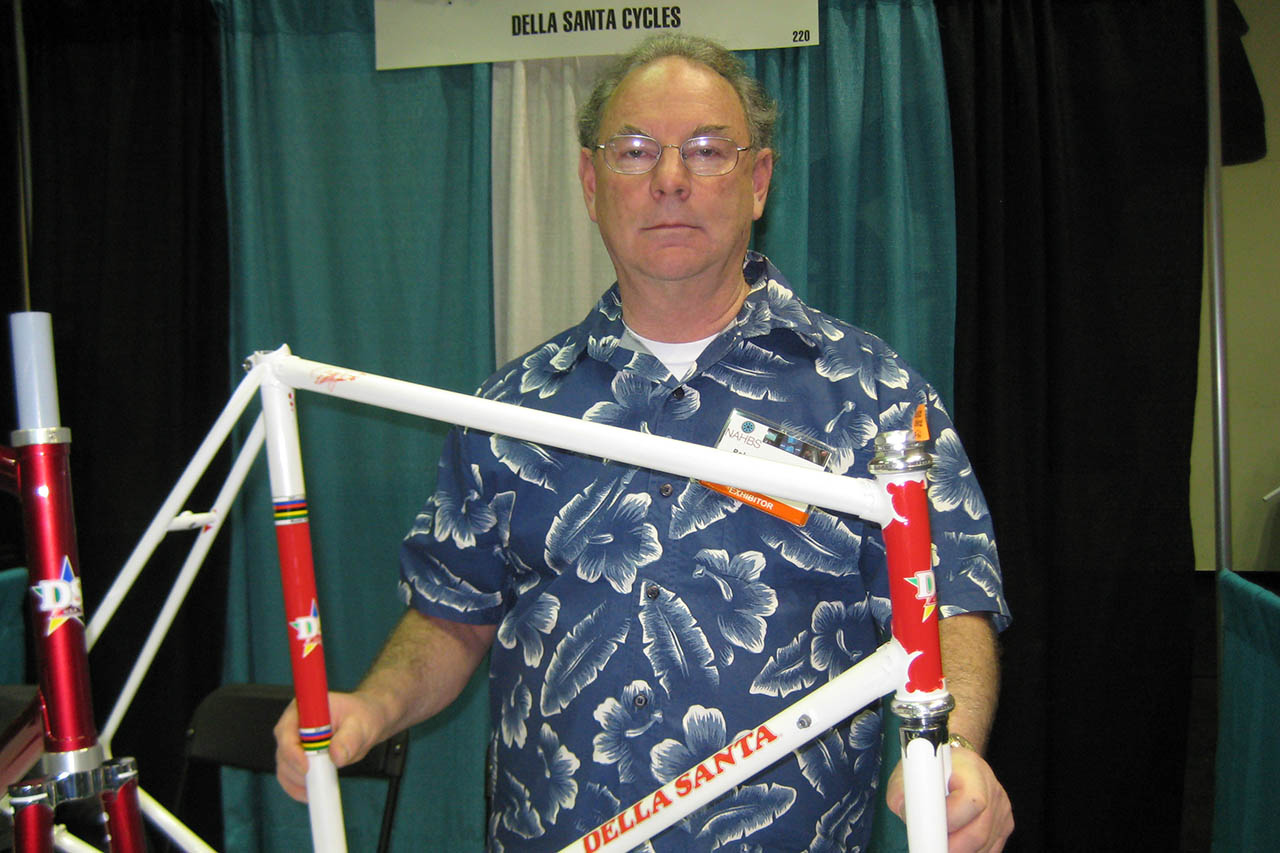 NAHBS 2009, just the frames in an unadorned booth space. This is the way he always showed up at NAHBS. Photo: Paul Skilbeck

While each Della Santa-labeled frame was made to order, Roland never considered himself a “custom” builder.  Since most of his early customers were racers, who knew what they wanted and what worked for them, it enabled Della Santa to keep things within known parameters.

Della Santa didn’t require an hours long fitting process to make a made-to-measure frame. It was about intuition and tradition more than the particulars of angle degrees and tube lengths to the millimeter.

Pairing a rider with his or her bike was a gestalt process for Della Santa. He was content to look at a client and their current bike, and all that was needed to produce a tailored frame was the rider’s desired seat tube length, top tube length, seat tube angle, and intended use for the frame. He was happy to take some basic measurements himself, but was equally accepting of having an experienced bike shop do it.

Unlike frame builders who have order backlogs of many years’ duration, Della Santa was known for his short lead time (often less than 8 weeks). He believed in building frames accurately and quickly, to avoid keeping the customer waiting. While he appreciated a nice-looking bike, he didn’t believe in doing extra work such as lug filing if it didn’t make the bike perform better.

As efficiently as he produced frames, the buying experience with Della Santa was never rushed. His longtime collaboration with painter Jim Allen of Cyclesmiths resulted in finished frames that look as good as they ride.

According to many of his customers, Roland, a witty story teller, was happy to talk at length about many subjects beyond cycling, racing and the bike industry, often regaling people with stories about his time in the Navy. Phone calls easily could last an hour, with subjects going off on many tangents, but always coming back to the original point of the conversation. 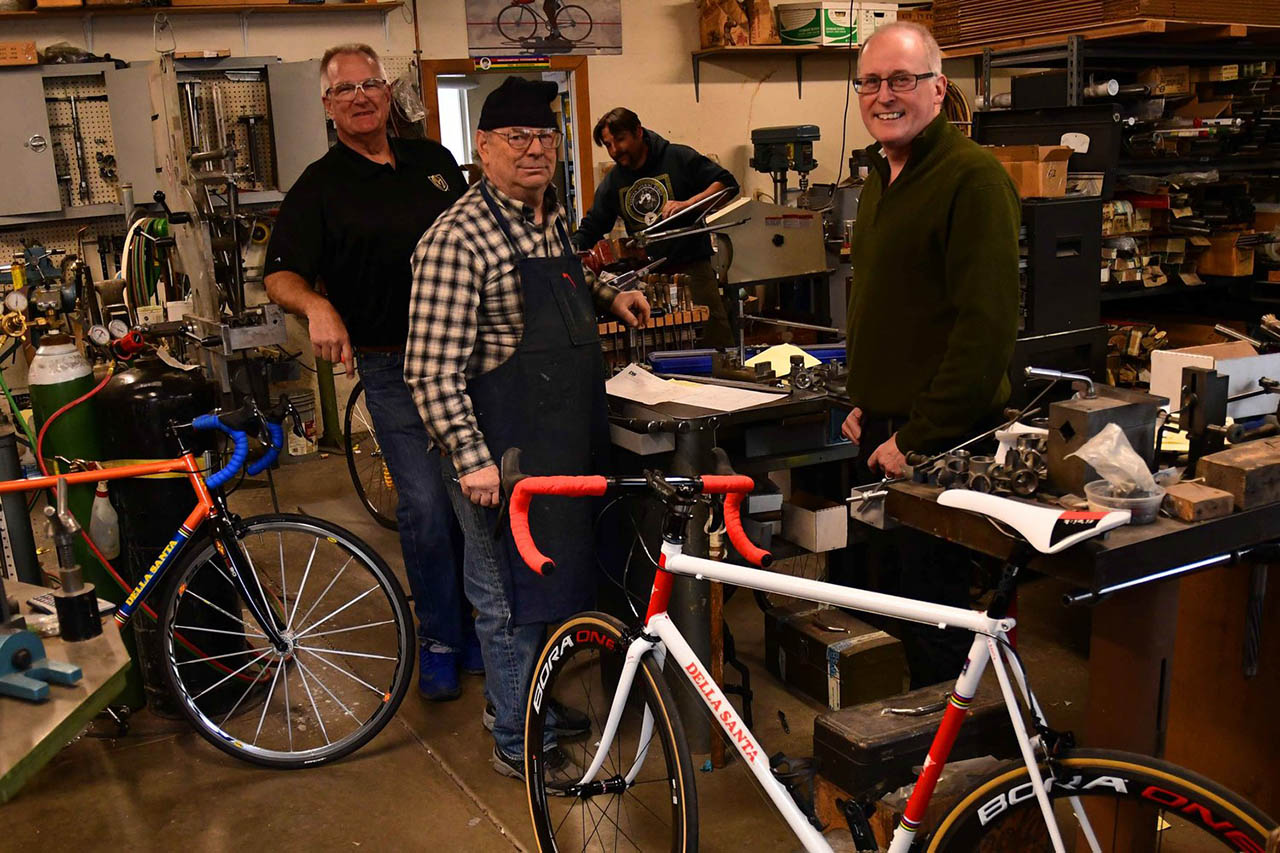 "He was a nice guy, really sarcastic, kind of snarky sometimes,” said LeMond, adding “He had a good sense of humor and was always calm, always mellow.”

Walker thought much the same: “He was one of the funniest people I knew. He pushed boundaries as well as buttons with his humor. If he said something that may have offended you, he did it with a wry smile on his face looking to get a reaction. He enjoyed messing with folks in this way. He had that "old guy street cred", but he’s had that since the 1970s.”

Della Santa had recently exhibited his frames at the 2019 North American Handmade Bicycle Show, held during March in Sacramento.

He was unmarried and leaves behind no close relatives. Plans for a memorial service are pending. 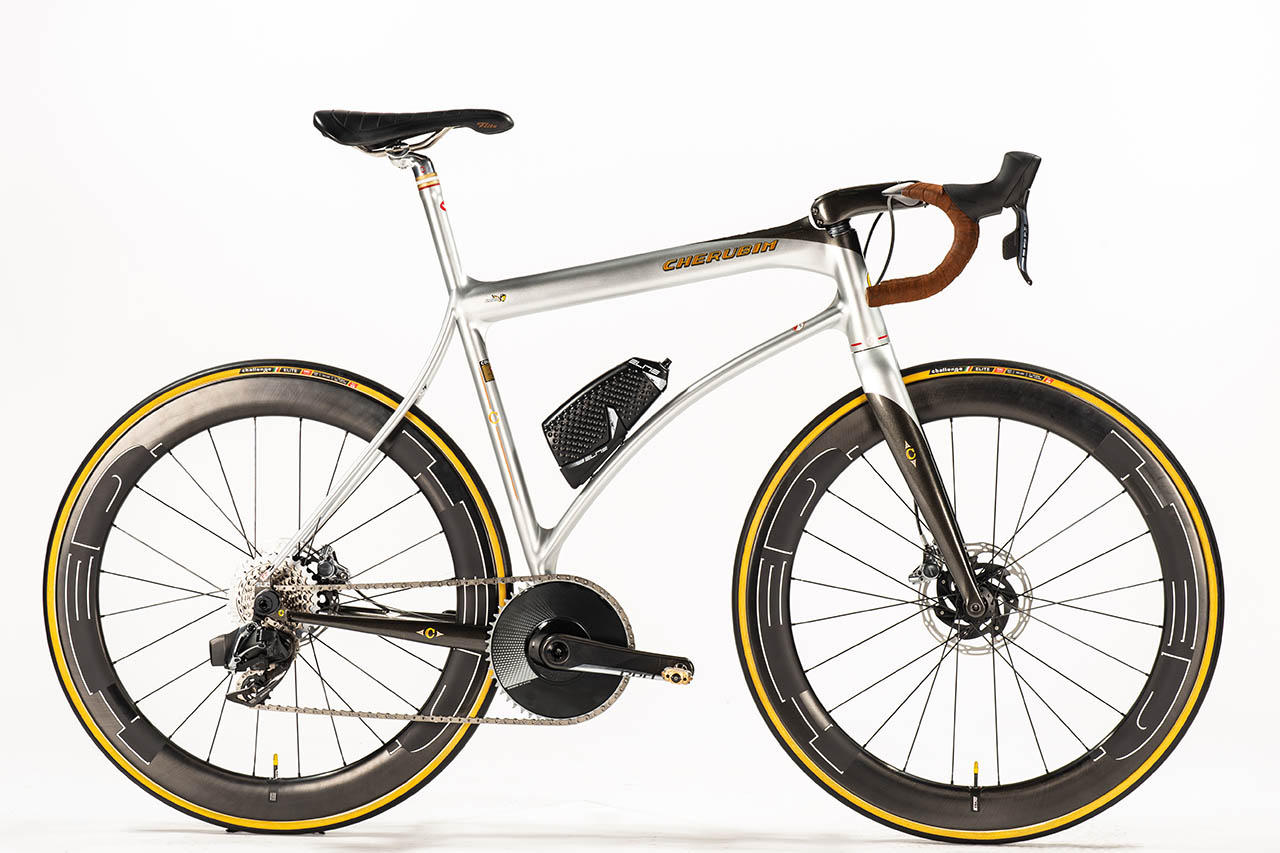