The award-winning new builder from the 2019 NAHBS shares his thoughts and experiences on a coast-to-coast journey that began in the Sacramento Convention Center.

This is a travelogue that starts in Sacramento, California, during NAHBS, when Tom Porter won the Best New Builder award. Tom's plan was always to ride back from NAHBS to his home in Brooklyn, New York, on a frame he was going to build into a bike after the show. The below account is assembled from Tom's Instagram feed and information he supplied separately. 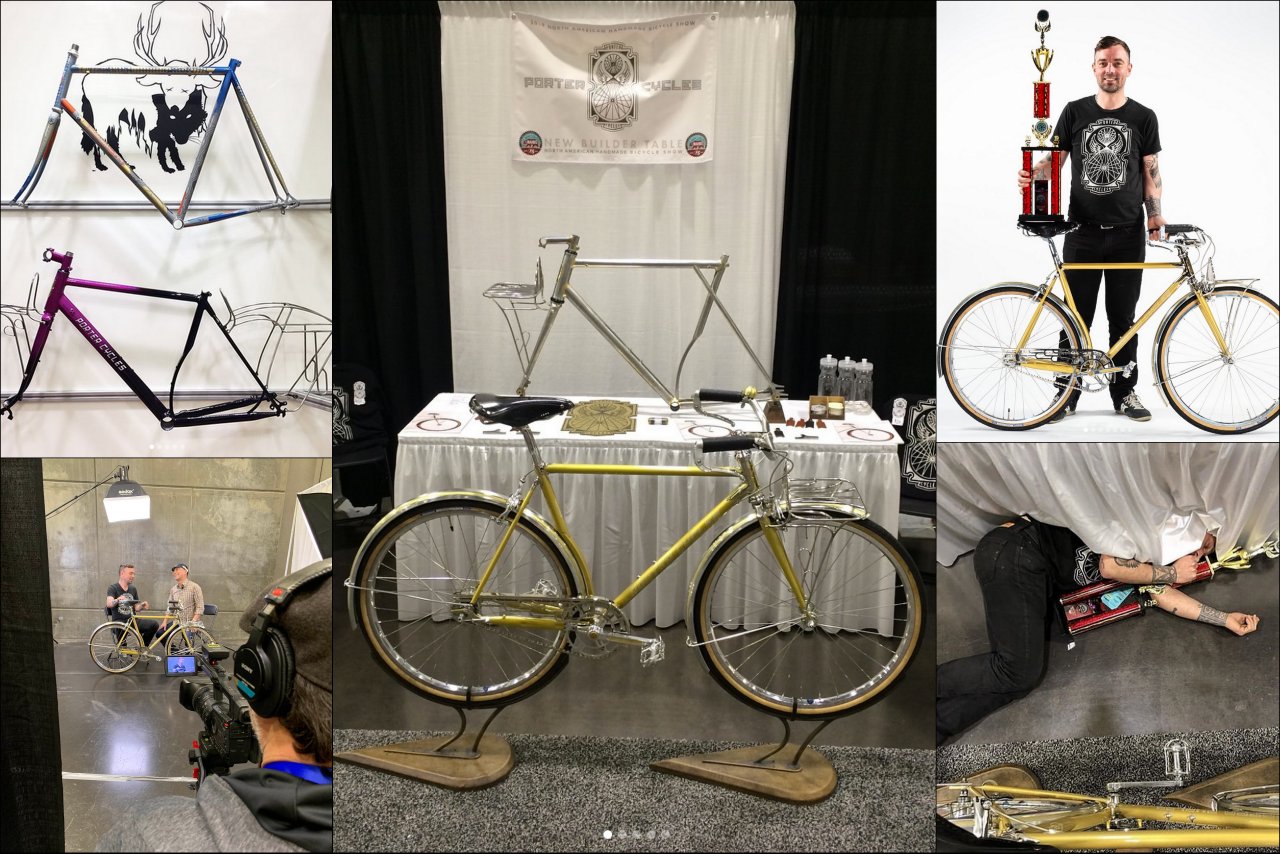 Clockwise from top left: @dariopegoretti frame on top #portercycles frame below in the @blackmagicpaint booth. This is the touring bike that I’ll be riding back through California and then east to NYC in the weeks to come. This collaboration with Black Magic Paint was months in the making, I’m so psyched to get to work with such a badass and talented gang. Big thanks to Evan for laying down the 🔥🔥🔥 #amazingpaint #nahbs2019 #itsover #justbeginning. My booth at NAHBS. Me, Winged Victory, and the Best New Builder trophy! So so so stoked!! @obikeco caught me crashing after the extreme high, #napsofnahbs. My booth (again). Me being interviewd by Ely of @ruthworkssf in the HBG video studio at NAHBS. 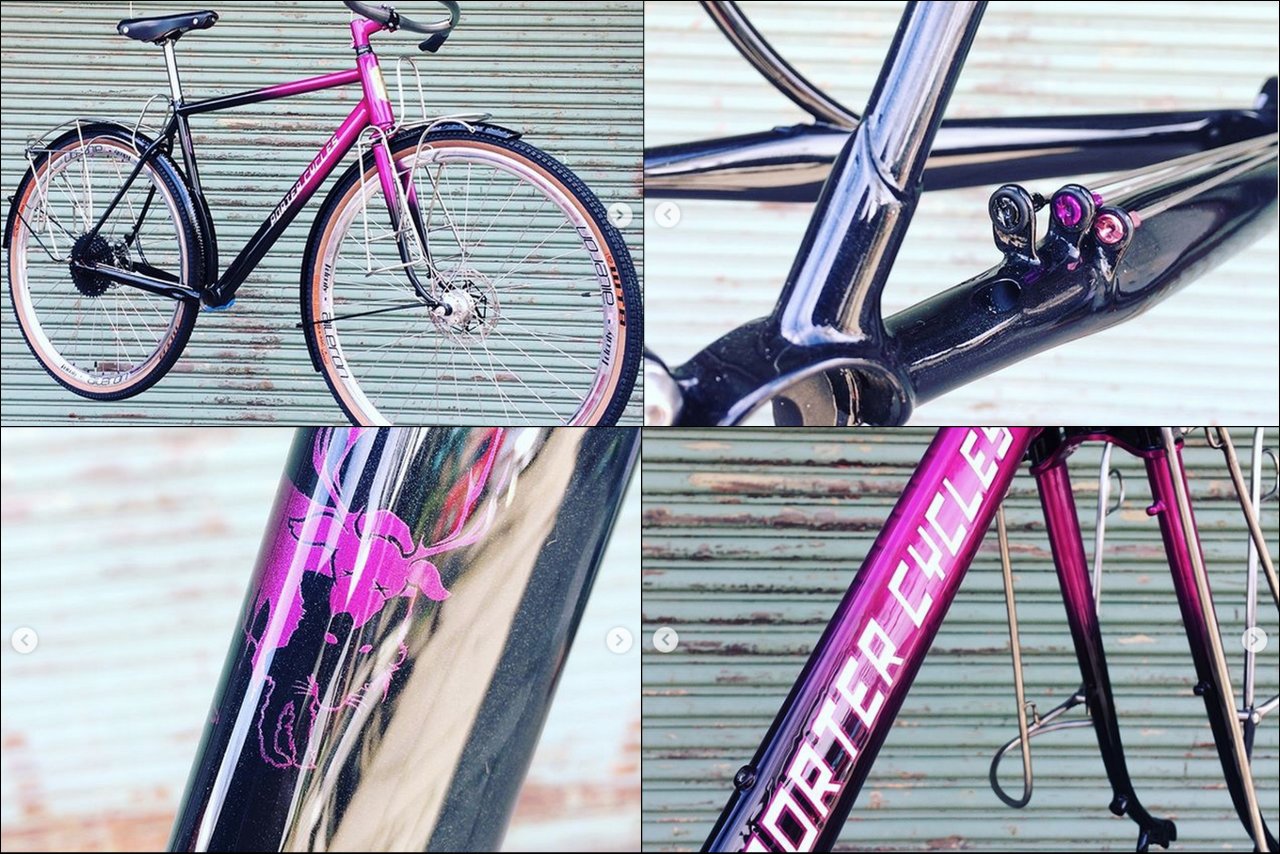 Slowly getting the touring bike built up. I’m blessed to have @bicyclerepairium as the best ever host while I’m still here in Sacramento CA. I’m hoping to be on my way to San Fransisco tomorrow morning! Casual 130 mile ride to kick off the tour, stretch the legs and shake out the hiccups. #biketour#touringbike#almostready 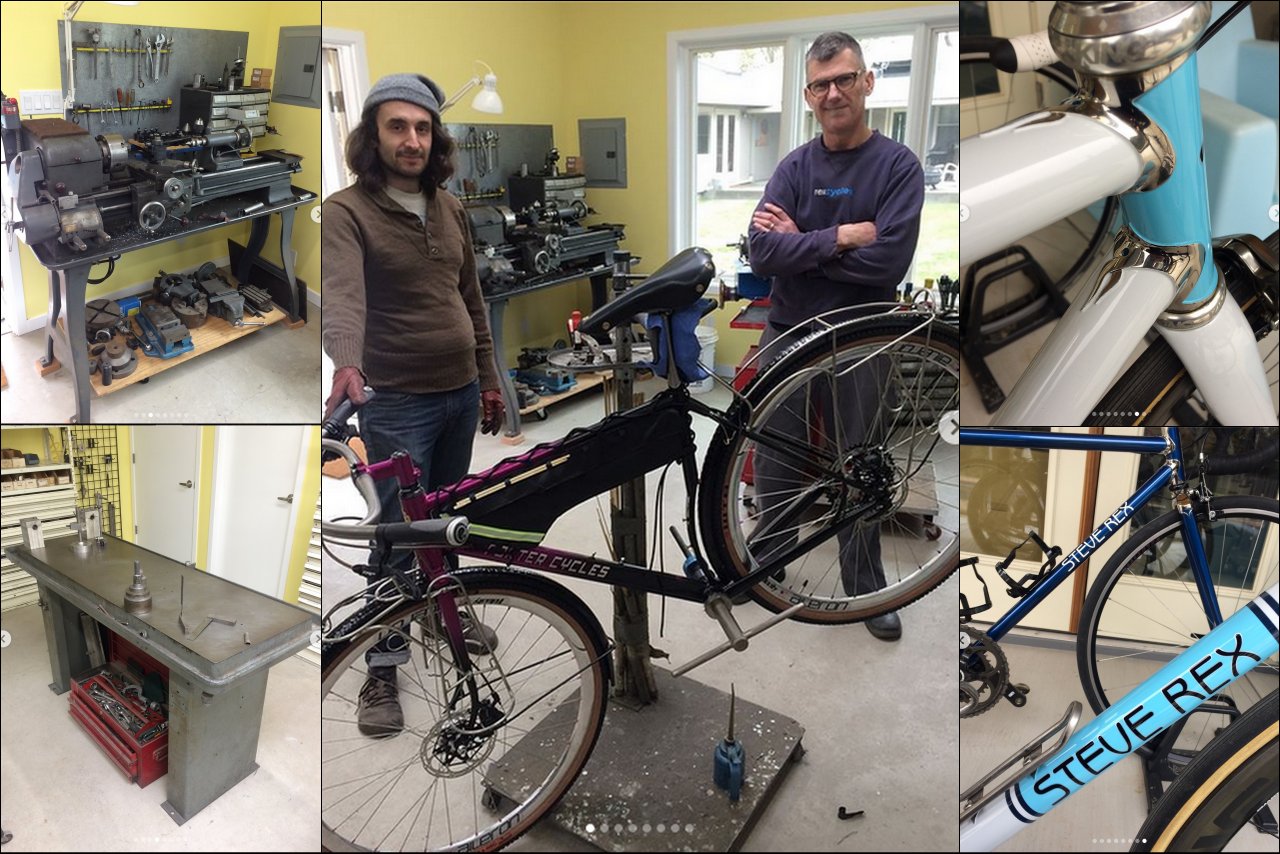 Shout out to @rexcycles for letting me come by to face my T47 BB down a mil so my cranks would fit right. So rad getting to throw some sparks and curl up some chips in your new shop. Thank you! And thank you @bicyclerepairium for making the connect and getting me out there 🙏🏼 life and bike savers. #steverex#rexcycles#raddude 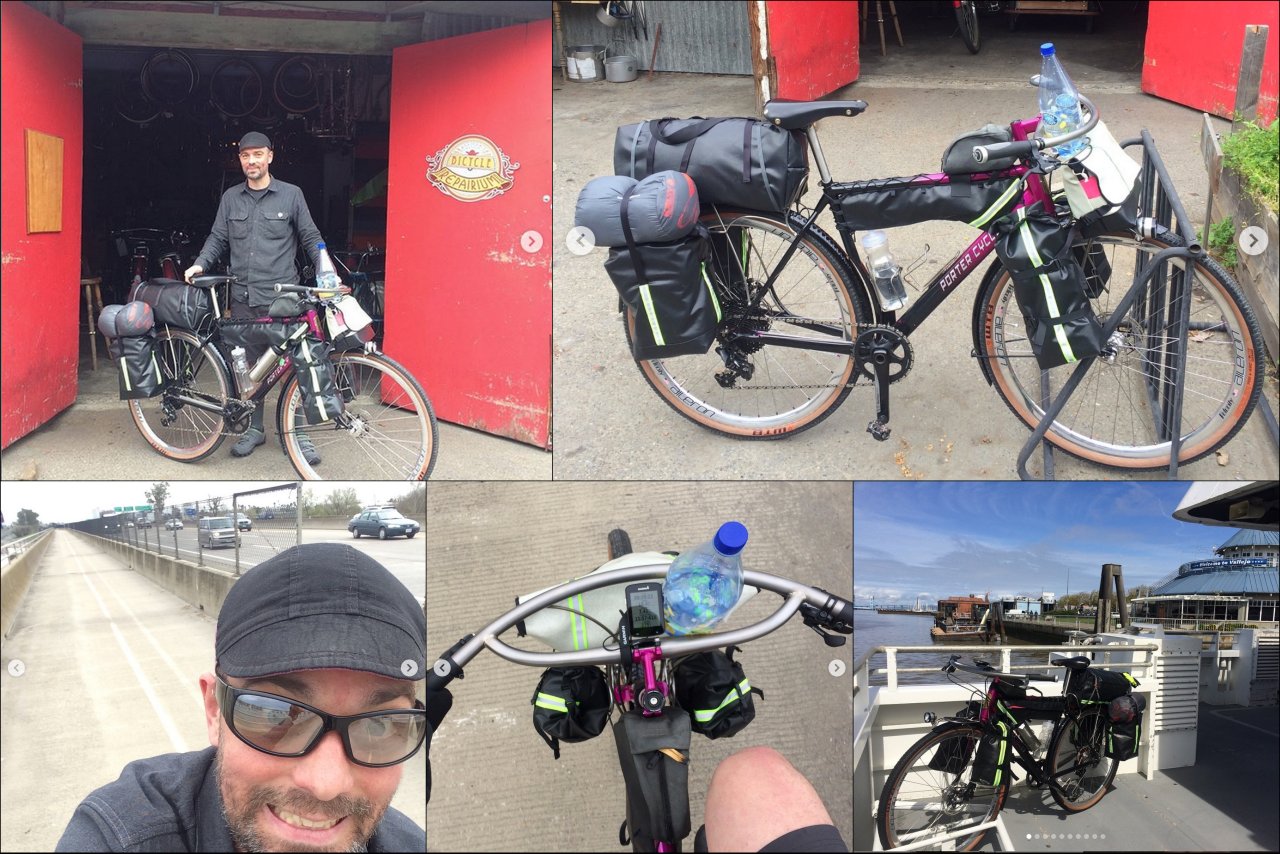 This was taken at the I rolled out from the Bicycle Reparium in Sacramento and set off to ride 70 miles to Vallejo. It was not the easiest of first days, pushing all the way into a powerful westerly wind that sweeps through the huge river delta. They have wind farms there. Driving rain didn't help, I got hammered. My knees took a pounding and I missed the last ferry from Vallejo to San Francisco by an hour. I ended up in a DaysInn overnight where it took a 25 min hot shower to regain sensation in my feet and hands.... I feel like I jumped in at the deep end! I'm deeply grateful to Addison, Carson, Gabriella and Jack for making me feel part of the Reparium family and getting me launched on this trip. 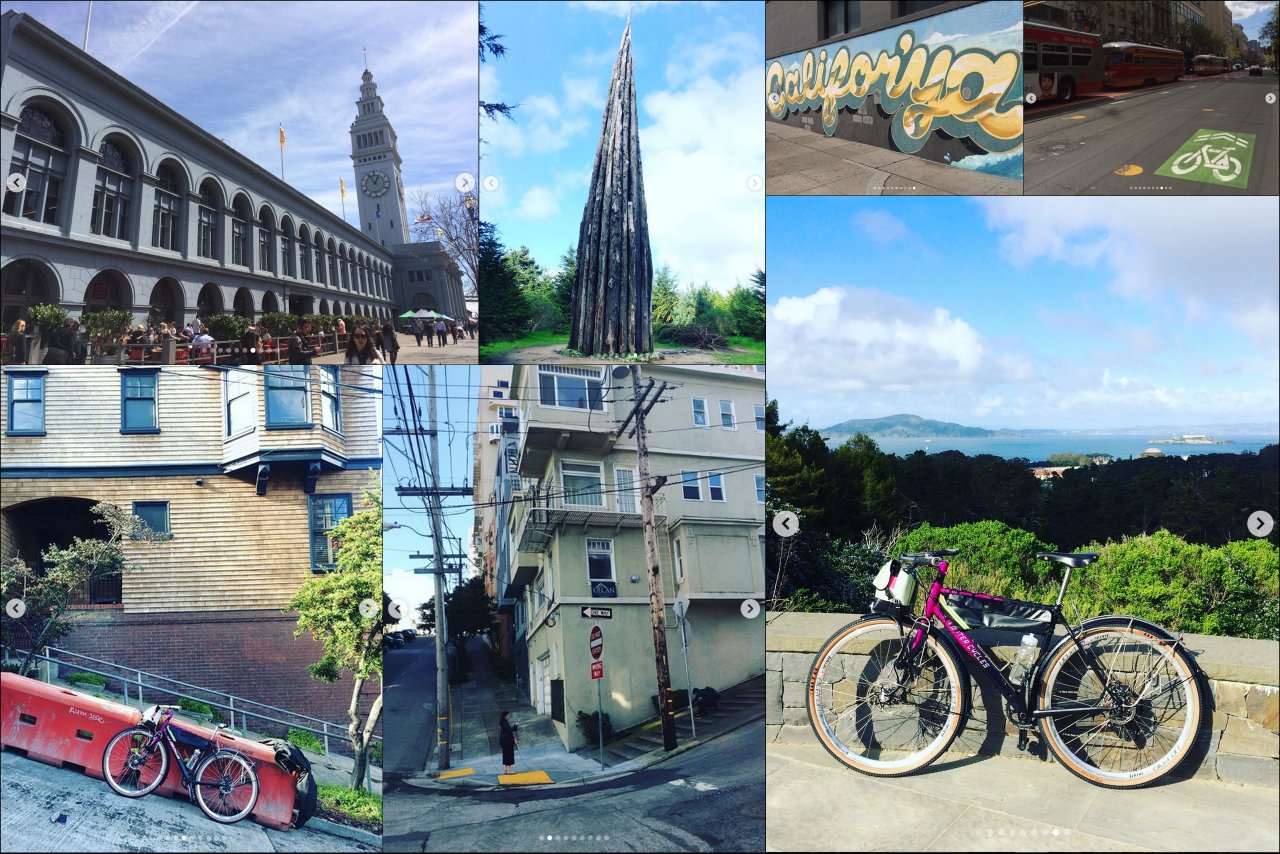 San Francisco. Lots and lots of climbing and beautiful streets, light, and views from the Golden City. #sanfrancisco#goldencity 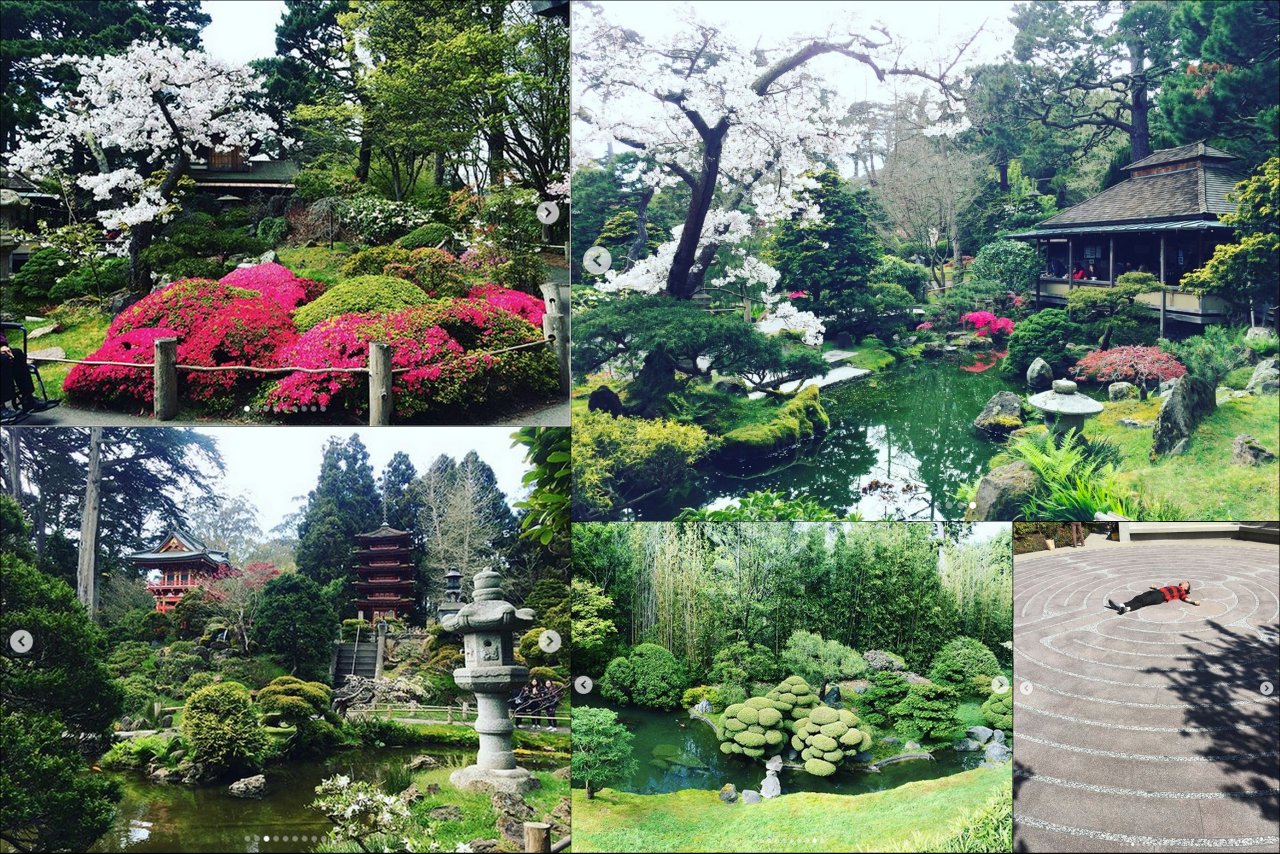 For those that love Japanese gardens as much as I do, this one is in the amazing Golden Gate Park in San Francisco. 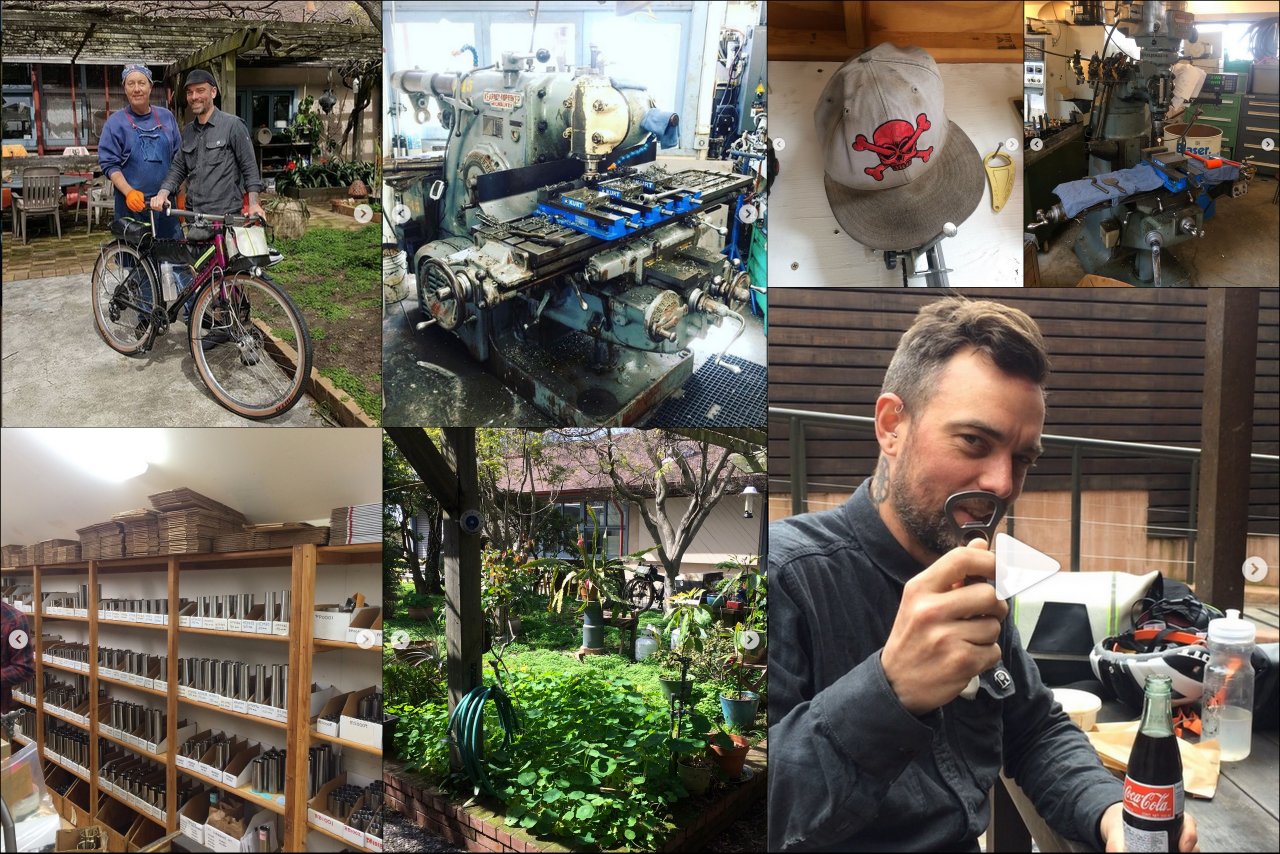 A day in the East Bay. Inside the @paragonmachine with Mark Norstad, getting a behind the scenes look at the most important bicycle frame parts manufacturer in the US, if not the world. @hbgpix helped make this impromptu promo video for Paragon’s Ti bottle opener. 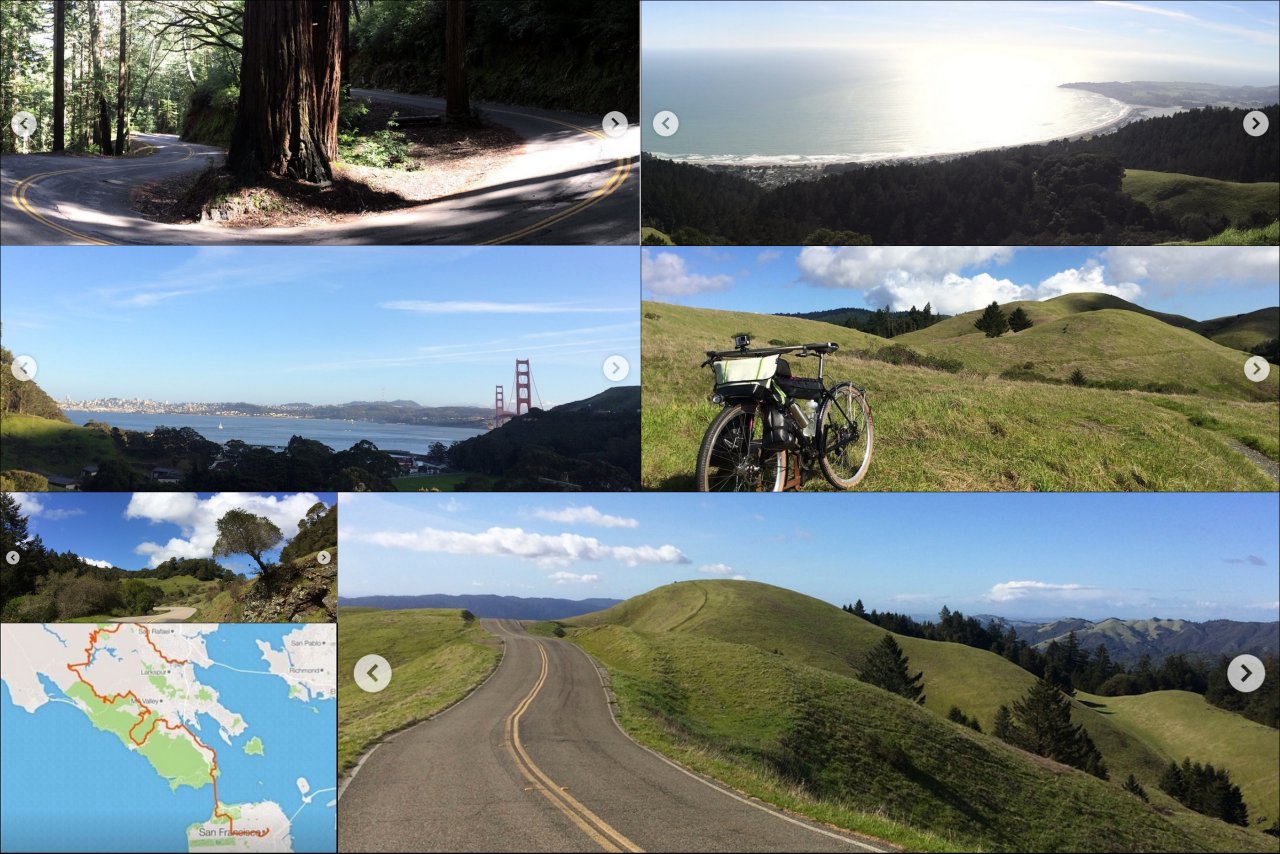 Today was spent taking in unspeakable beauty and suffering physically for every glorious moment. The hills! But god damn, the views. I took the ferry from SF to Larkspur, biked up to Fairfax, and up Bolinas Rd, up Mount Tamalpais Watershed, then around the Muir Woods reserve, Tamalpais State Park, through Sausalito and across the Golden Gate Bridge back into San Francisco. Phew! 51 miles and 5k feet climbing, amazing views, epic winding descents, and I’m whipped. Part 1 of today: no photos will ever do justice. Thank you @hbgpix for giving me this route!! (That's us! Ed.) You seriously undersold the hardship. 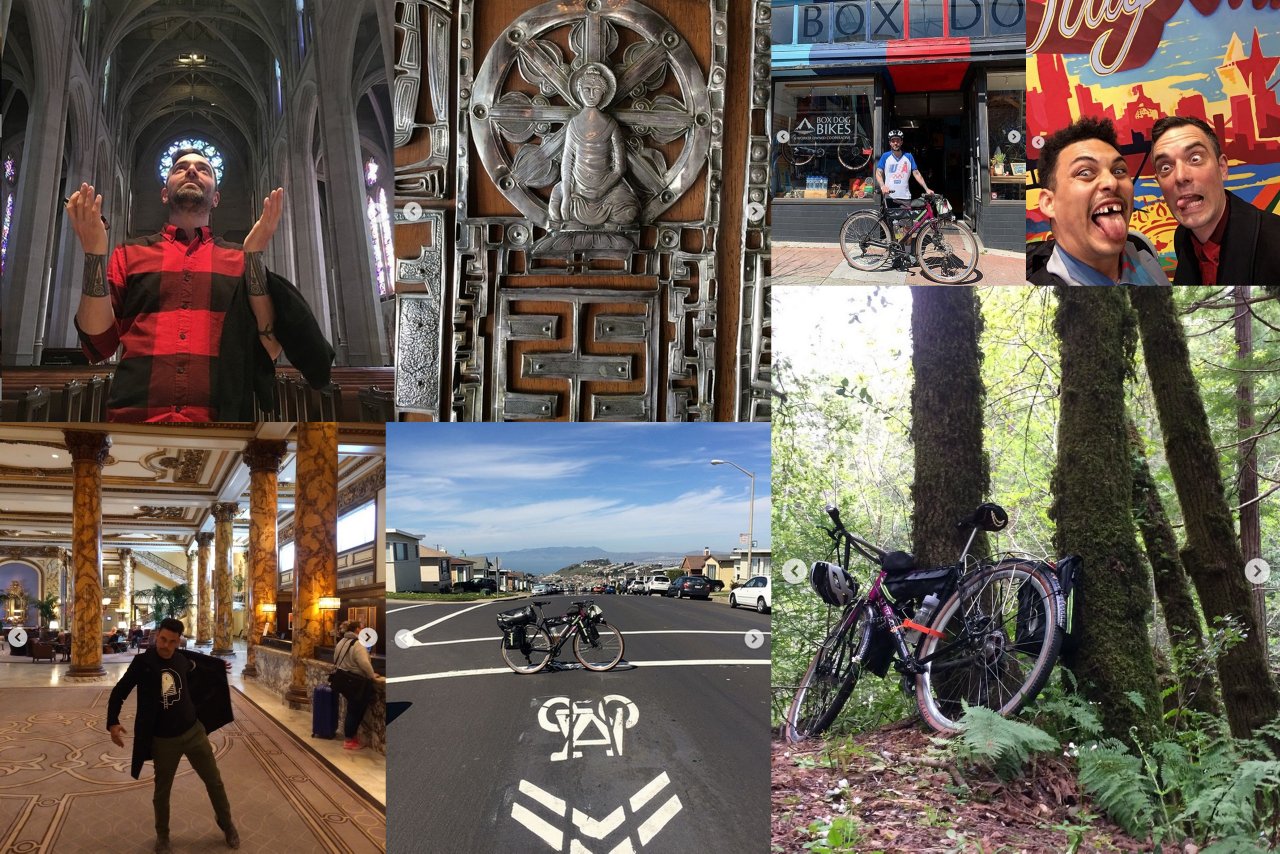 Last day in SF having the BEST time with @quizkhalifa taking in a truly spiritual experience with a spiritual brother of the universe. Thank you Ian for all that you are. #biketour #sf #sanfran #alreadygone. Next day I packed up my bike and rolled out of San Francisco. Heading south on the peninsula and then westward down a long sweeping descent, this evening I am out in the woods camped under the tall trees near La Honda. 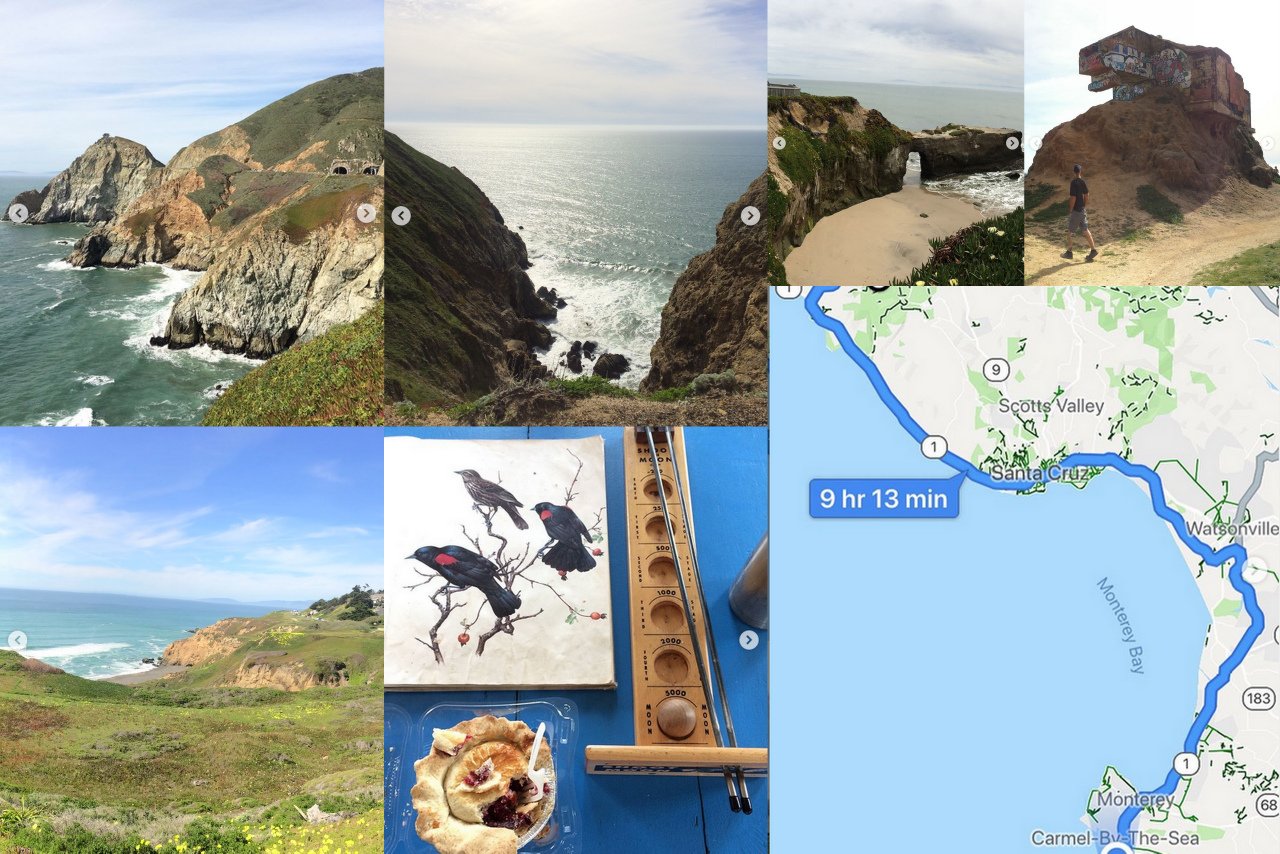 I woke this morning in a red wood forest by a stream and biked 90 miles through incredible beauty, ate fresh taz-berry pie, sipped cider, and arrived in Carmel by-the-sea just in time for sunset. California. WTF. You ask so much with these climbs and give so much in exchange. Just wait for the GoPro footage I’m getting. Thank you @reverend_dick for putting me up for the night 🙌🏼 #biketour #californiadreaming #goldcoast. If God doesn’t live in California, It definitely spends a lot of time here. #camerafail#foreyesonly#biketour#calicoast#highway1 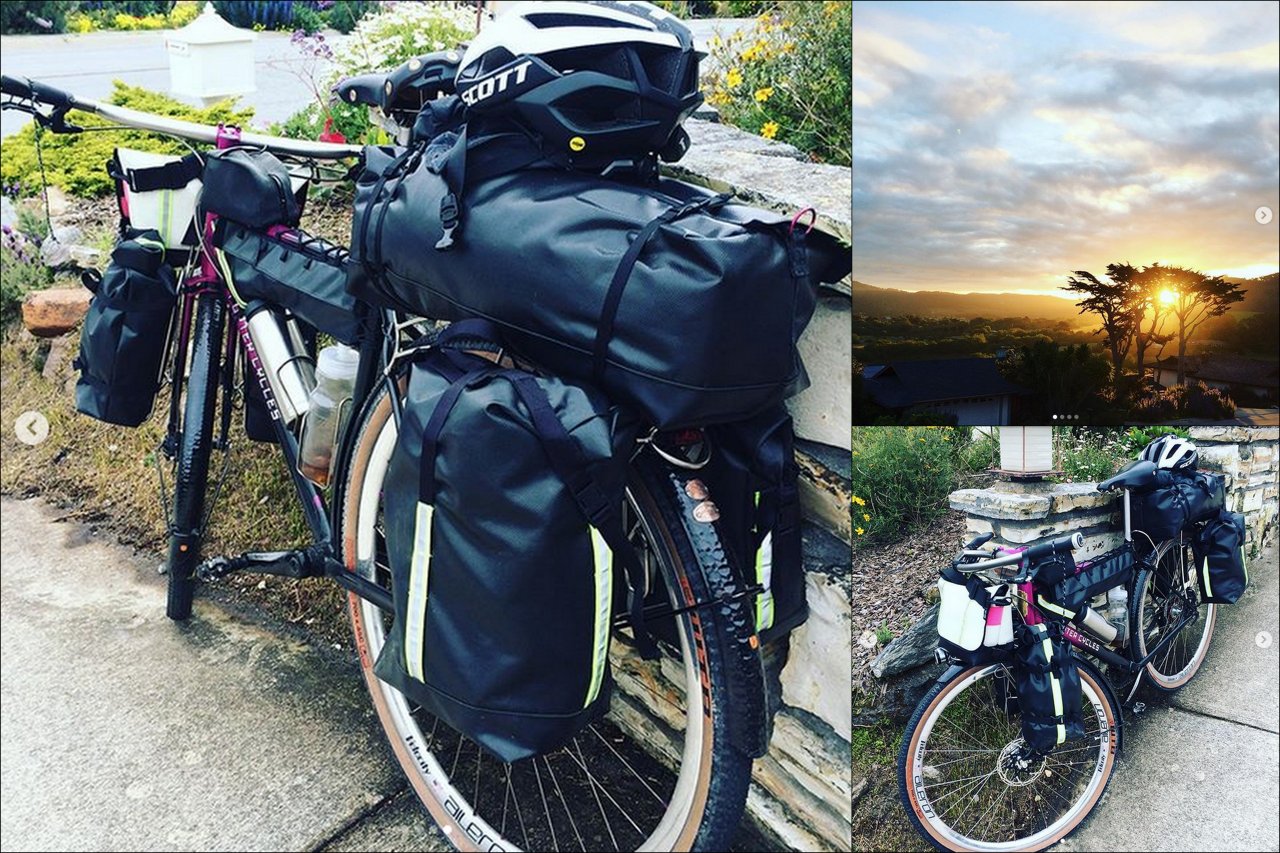 Rise and Shine. All packed up for a late start after an early tour tune-up. Headed into Big Sur from Carmel CA. @stecleestitches touring bag kit collaboration is killing it. I’m working on lowering my base load but down to my perceived essentials. #biketour#xcountry#californiadreaming 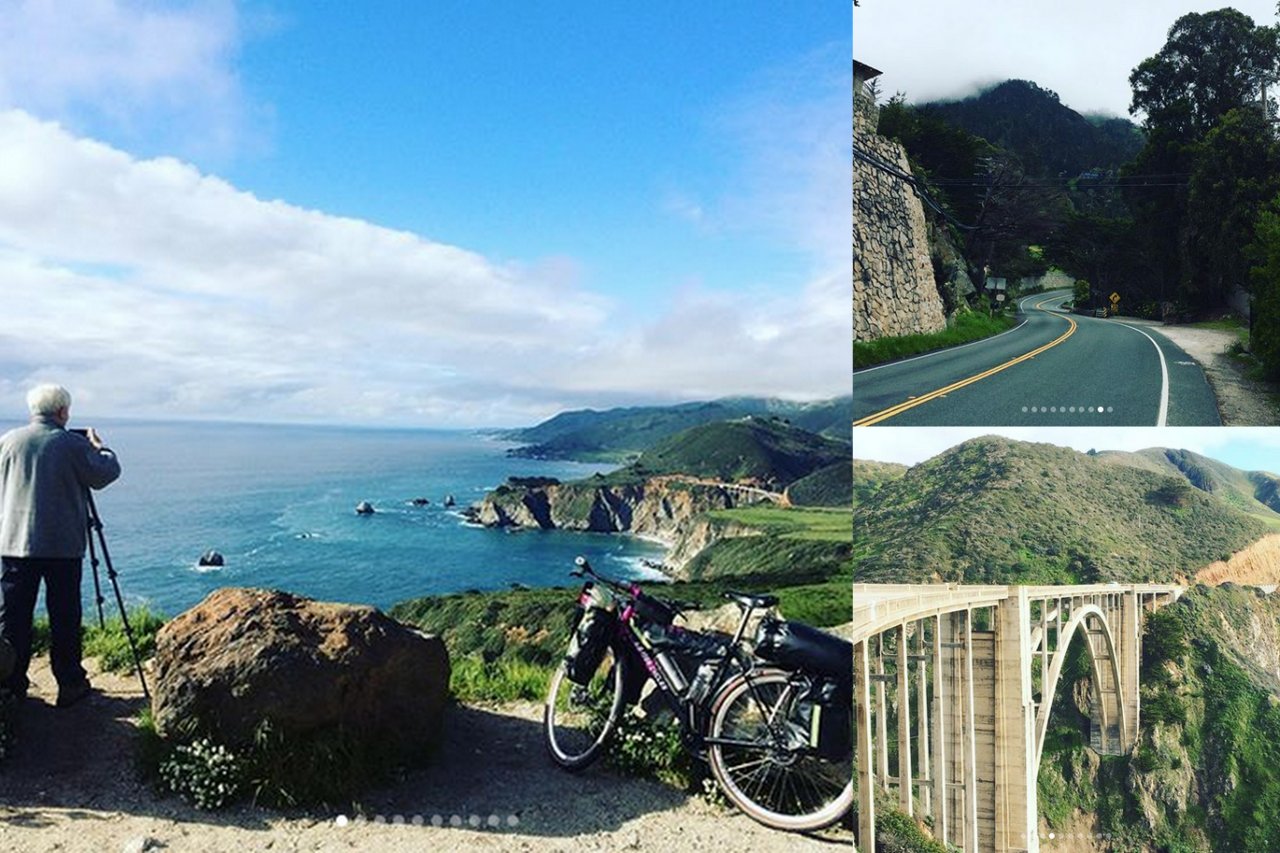 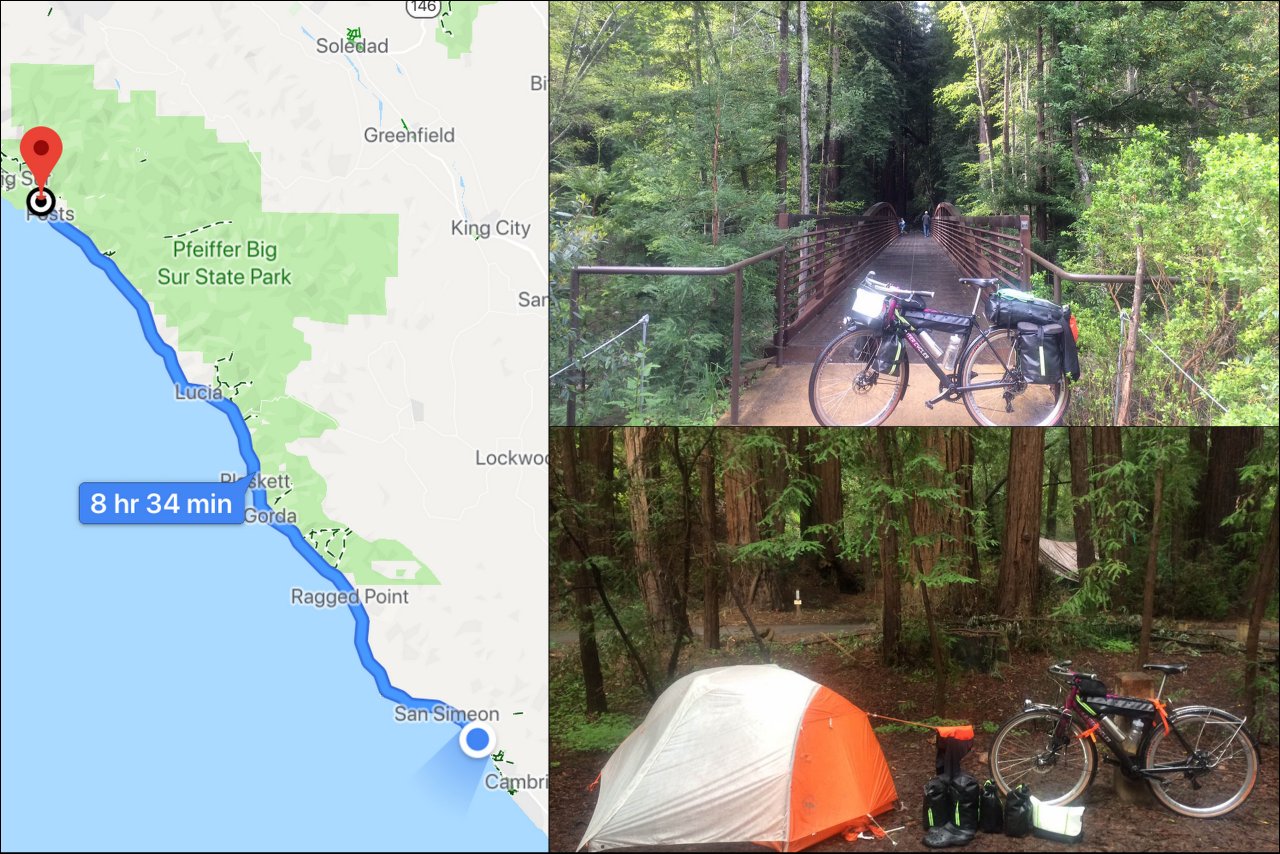 69 miles today to the San Simeon campground, where I will stop until the weekend. 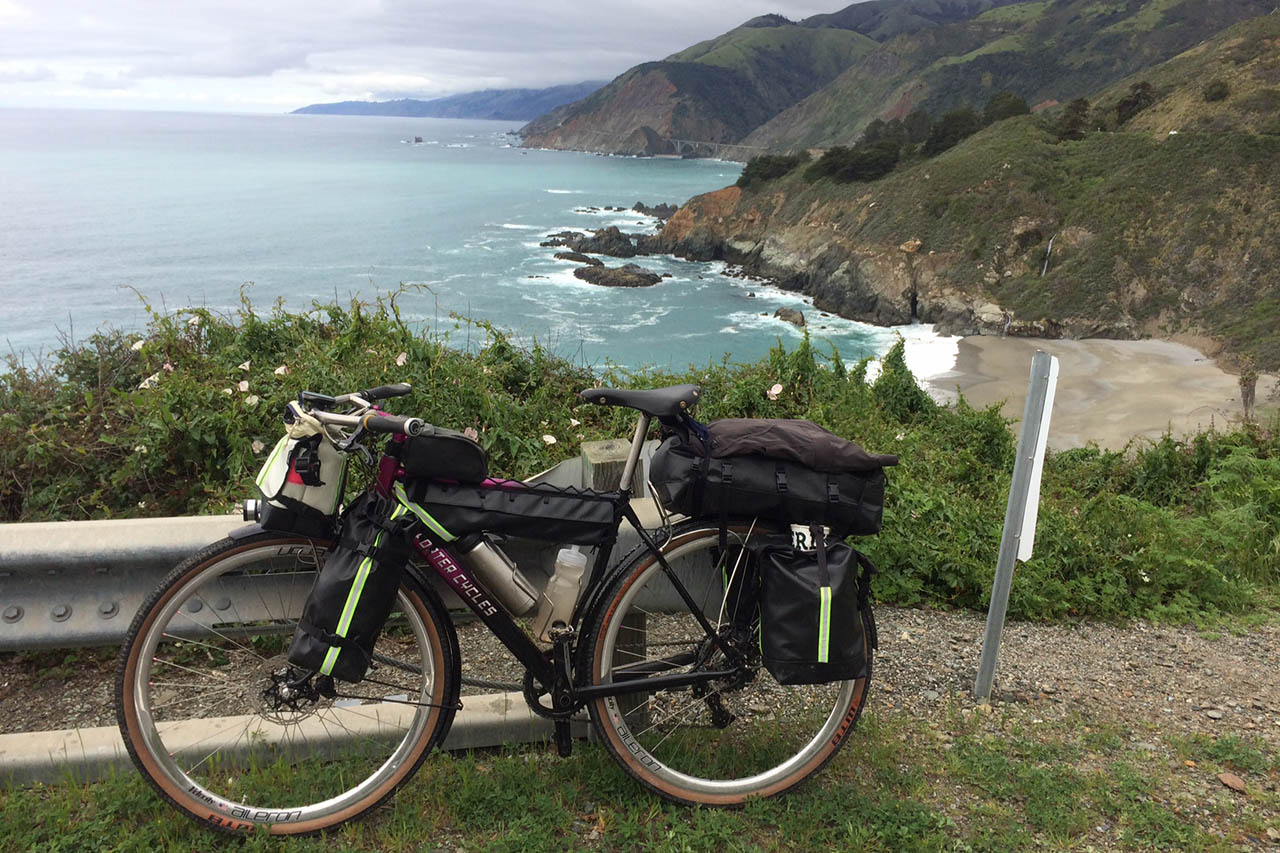 Gamboa Point, a few miles north of Lucia on the Cabrillo Highway

A modest selection from the least modest of places... this is one of those dreamy places that inspires and astounds me. To think that wealth like this is possible, that a project like this by a private citizen came to be, the lifestyle this place represents, all leave me spinning in fantasy and thoughts of what it was like to have partied here in the day with Hollywood classics like Chaplin and Bridgette Bordeaux. Pretty unreal.#hearstcastle#juliamorganarchitecture#goldenage#homegoals

Notes from the Ocean... Moonstone Beach, Cambria, California. After a week traveling along the insane coastline of California, I finally touched the shining waters of the Pacific, and it is cold!#moonstonebeach#cambriacalifornia#biketour#xcountry#californiabeaming

So I spent the preceeding night in campgrounds hanging out with Igor and Andrea and their baby boy (team Velo Orange), Ely from Ruthworks SF and John from Fitz Cycles, talking bikes around a campfire. That was the night before Eroica kicked off in Cambria. The next day we all ogled bikes at the Eroica flea market, and I made my way off into the hills from there, opposite the direction of the course riders. Before I left, I connected with Benedict (@ultraromance) who suggested a ride out to Soda Lake through the Carrizo Plains. It would be far out of the way compared to the coast but I thought it was worth it for a look at the super bloom that is apparently quite rare. It took a hot and heavy day riding up Hwy101 and part of 58 to get to a camp ground 63 miles away in Santa Margarita. I did stop along the way to appreciate the blooms. The KOA campgrounds I made it to happened to have a gathering atop its local hilltop of the Stargazers group, with a lovely assortment of telescopes and Star matter enthusiasts to talk to.

Hills, heat, headwinds... smoking hot day on 58 but made it to the super bloomage and now camped out in the hills overlooking Soda Lake in Carrizo Plain National Monument. 61 mile day spent climbing and sweating up 3k ft elevation.#biketour#socal

Metal shops and I just magnetize together. I happened to catch a guy in his truck leaving a ranch on the Carrizo Plain, seemed like we both approached the same point at the same moment for a reason. I asked about camping spots, he spun around and drove back up the road and introduced me to his dad, rad guy who is the conservationist of a defunct ranch within the National Park space. The place was a time capsule, I wanted to photograph the whole house when he let me in to refill my water. He gave me directions and we talked a minute. I mentioned that I’m a metalworker. On the way out they offered a look inside the ranches black smith shop, YES PLEASE! This is one of many total gem moments I’ve had out here. Blessed indeed. And he gave me the heads up on the sickest hilltop trail side camping spot I’ve enjoyed yet. Thank you, Universe. Thank you, kind people.#biketour#socal#kindnessrules

Started the day in Soda Lake hills, climbed 3.5k feet up to top of Route 33 in Los Padres National Park, and just enjoyed the never-ender-descender coming down to Ojai. 90 miles start to finish today. Holy hell! Such a tough start to the day with 15 miles of wash board sandy road, boiling heat, epic climb, and then THE most epically amazing descent I’ve ever enjoyed. Oh yeah, and I caught a sweet skinny dip in the sickest shallow river, one of few watered waterways I saw today. I got a huge chunk shot on GoPro (not the skinny dip, sorry) unfortunately it died before the last 1/3 of the downhill. Truly spectacular beyond my ability to describe. I’ll be back!!#biketour#socal#epic#neverenderdescender