The New England Builders Ball returned to Boston on September 22 for its 8th annual handbuilt bicycle show. Always held in a distinctive space, show founder/director Eric Weis tailors each Ball to create a fun and relaxing atmosphere, more like a gallery opening than a traditional consumer expo, so that exhibitors have as good a time as attendees. The mix of new and returning framebuilders, combined with accessory, component, and garment makers, created perhaps the best Ball yet. As always, there was an important charitable component to the day, with $2000 disbursed after the show to bike-related charities doing important work in greater Boston. Here are a selection of the bikes and accessories that stood out this year. http://newenglandbuildersball.com/ 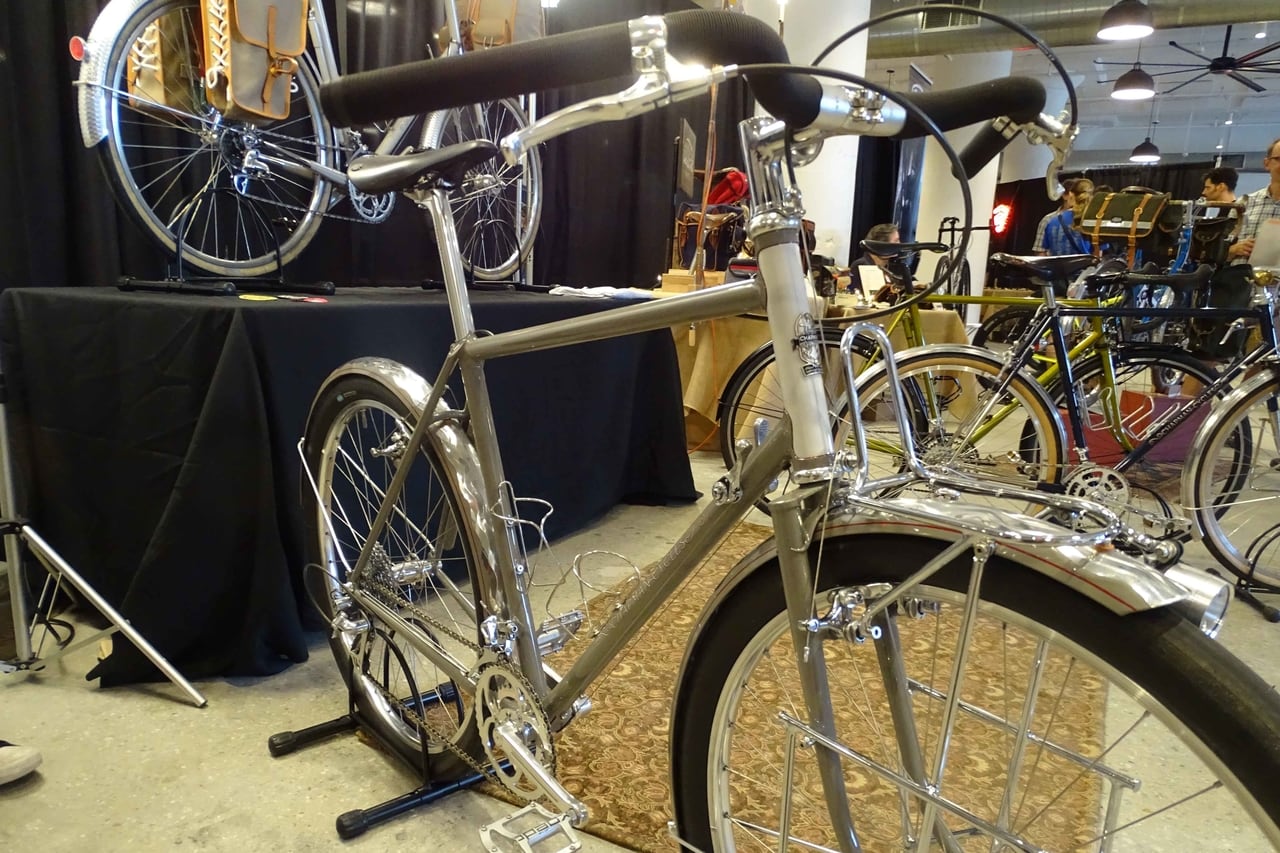 What’s not custom on this tourer from Brian Chapman? The frame is built from a combination of Reynolds, True Temper, and Columbus tubing. Details include handmade racks, handmade stem, handmade cable hangers, even the cantilever brakes were built by Brian. Other details that immediately stand out are the house-painted “wavy” fenders from Velo Orange, the bi-lam joints, Huret friction shifters, SunXCD drivetrain, integrated pump, and internally wired lighting system powered from a Schmidt SL dynamo hub. Speaking of which: these wheels were built by Cutlass Wheels in Baltimore; rear hub is a White Industries MI5, and rims are Pacenti Brevets. Oh, and perhaps you noticed the Jones Bend H-bar! At 710 mm wide, customer Frank will have no shortage of hand positions and mounting points, and he’ll cut a wide and handsome swath through the countryside. http://www.chapmancycles.com 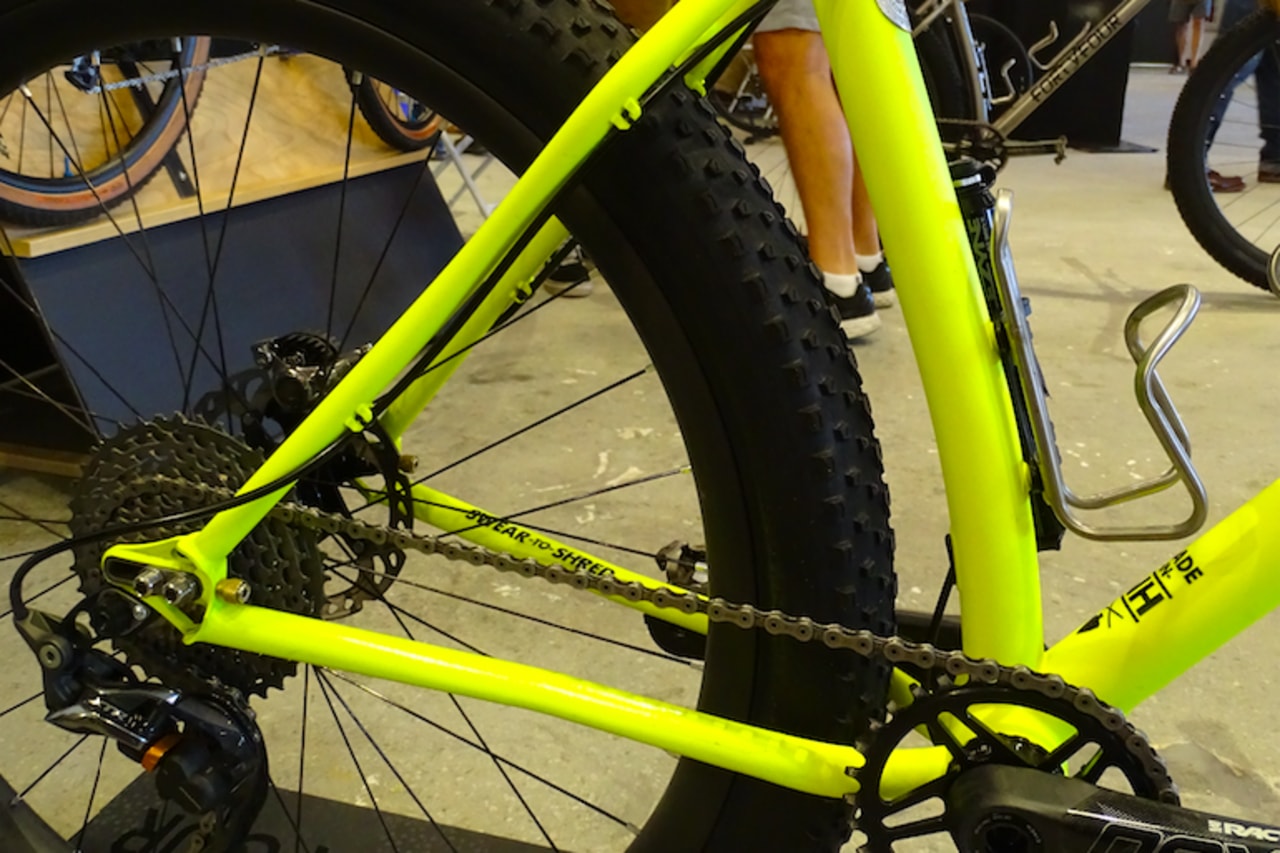 Kris Henry of 44 Bikes calls this model the Marauder, and it does seem ready to take on anything. The front triangle is Vari-Wall tubing of Kris’ design. Chain stays and seat stays are seamless 4130 steel aircraft tubing. The fittings (head tube, bottom bracket, dropouts, and braze-ons) are all from Paragon Machine Works. Tubes are TIG welded, with the bends in the seat tube, chain stays, and seat stays made in house. This mountain bike is meant to balance climbing, descending, and everything in between. Kris calls this custom geometry “44WRD”: his take on “forward geometry” but in a way he finds more balanced. Built around a 27.5” x 2.8” tire, it can run (as pictured) as a 1x or as a single speed. Rear axle spacing uses the 157 mm downhill standard (“SuperBoost”), so there’s no shortage of tire clearance and drivetrain performance is optimized. 44 Bikes are built in New Hampshire.  http://www.44bikes.com/ 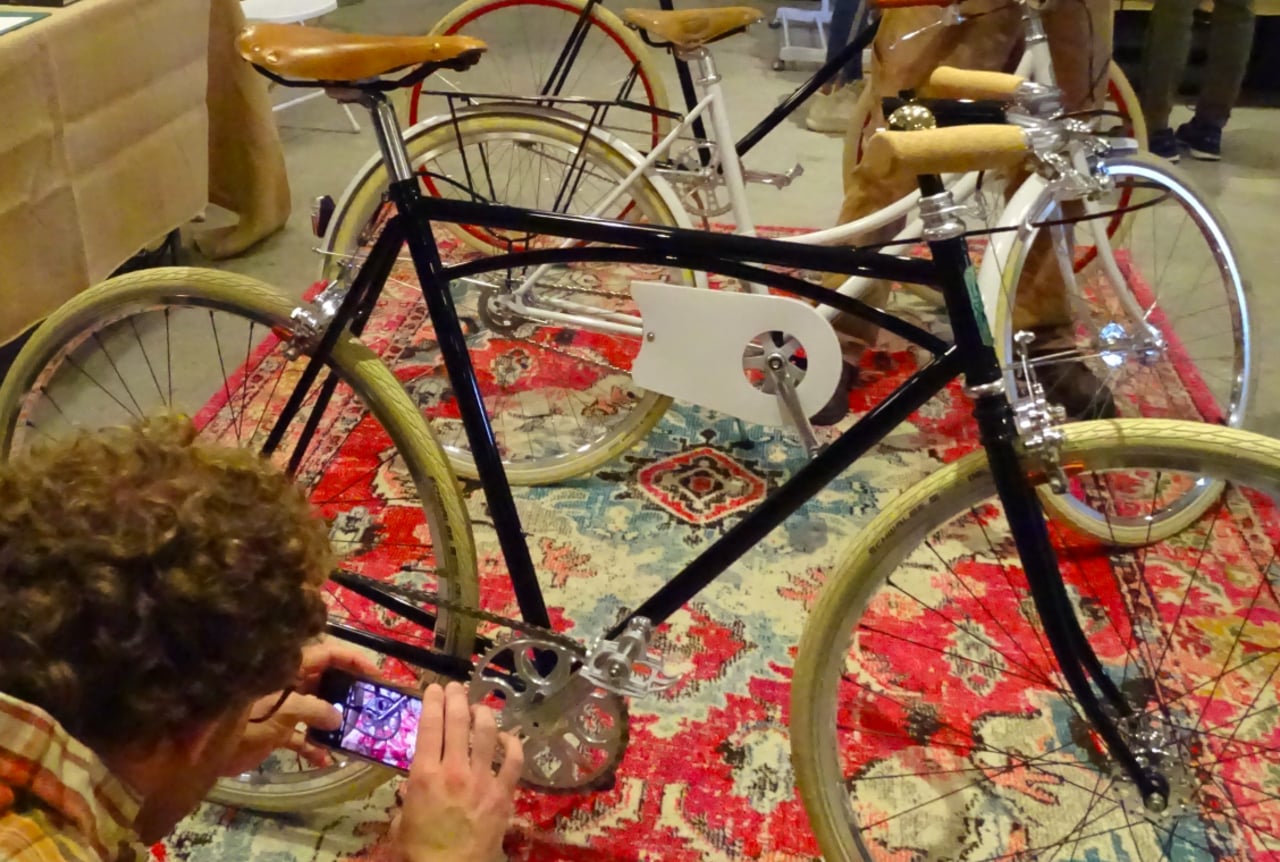 Mike Flanigan is a well-known figure in custom frame building, coming up in the Fat City factory and being one of the founders of Independent Fabrications before starting his now-beloved Alternative Needs Transportation (ANT) brand. Focusing wholly on transportation, and with an eye toward classic design, ANT bikes have always combined the best modern materials with proven techniques. After a stint with Seven Cycles, Mike is back building his own bikes, and the world has regained some balance. This truss-frame bike reflecting a popular Iver Johnson model from a century ago (also made in Massachusetts, incidentally) is made from True Temper tubing, TIG welded and brazed. One of the goals with this bike was to make it as US-sourced as possible: cranks, seat post, brakes and brake levers from Paul, bottom bracket and hubs from Phil Wood, Velocity rims, Selle Anatomica saddle, pedals and freewheel from White Industries, and even a US-made kickstand, from Greenfield. https://antbikemike.wordpress.com/ 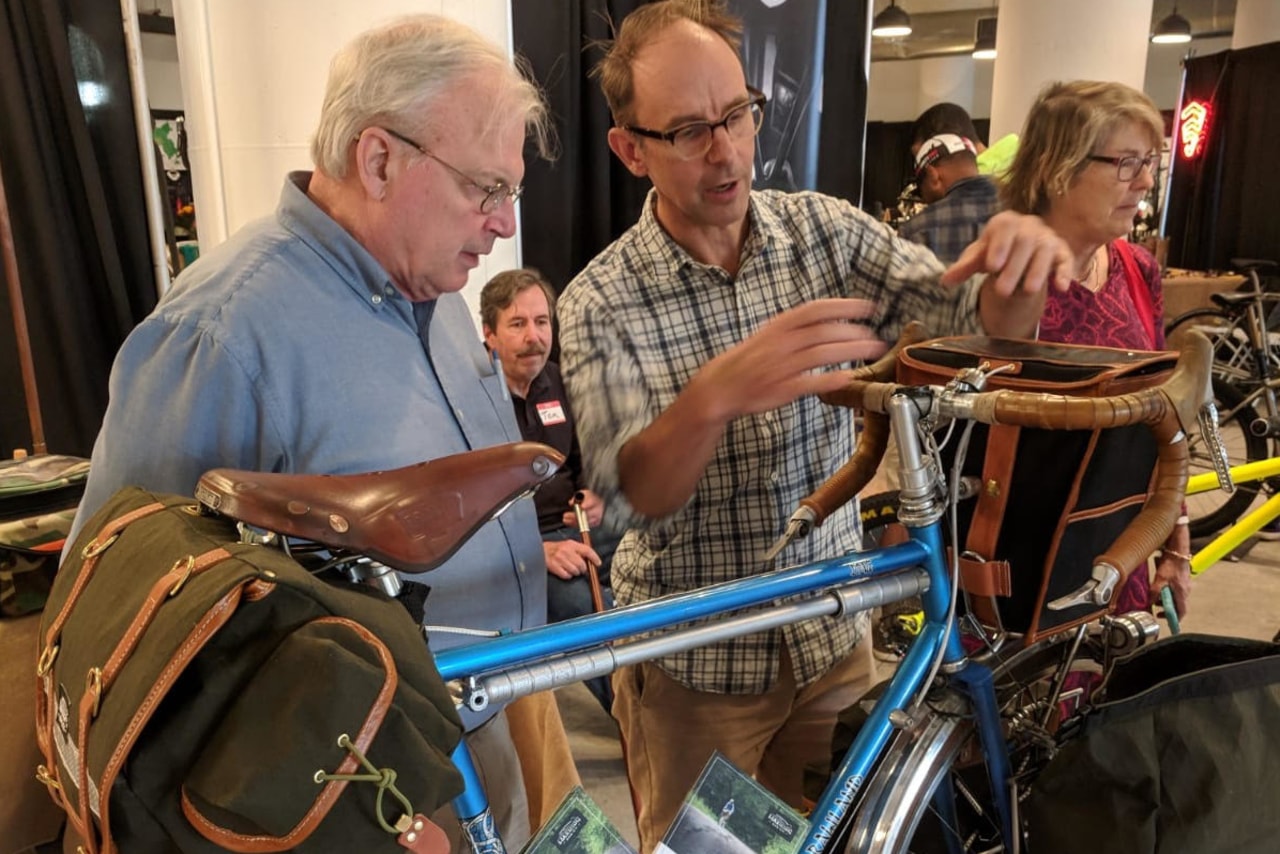 Waxwing Bag Co., of central Vermont, is the result of David Cain’s randonneuring habit crossed with his passion for form and function. Add a dash of leather and a sprinkling of brass and… well, you get the picture. David recently added a new material to his quiver: x10, a cotton thread combined with polyester material, light and waterproof, produced in Connecticut by Dimension-Polyant. The x10 bags shown here are medium-size roll-top panniers and a transverse saddlebag; the wedge-shaped handlebar bag toward which Dave is gesturing is a one-of-a-kind (so far!) collaboration with Peter Weigle. Peter came up with the idea for a bag that was a bit lighter, that gave his custom-built racks more visibility, and which allowed continued use of the map case while keeping the center of weight low and focused in a small footprint, and asked David to create it. Peter tested the bag at D2R2, where it was deemed a success!  http://www.waxwingbagco.com/