Giovanni Battaglin, former Giro D'Italia campione and head of the eponymous Italian bicycle brand, came to NAHBS for the first time, and brought a special Stephen Roche tribute frame with him. 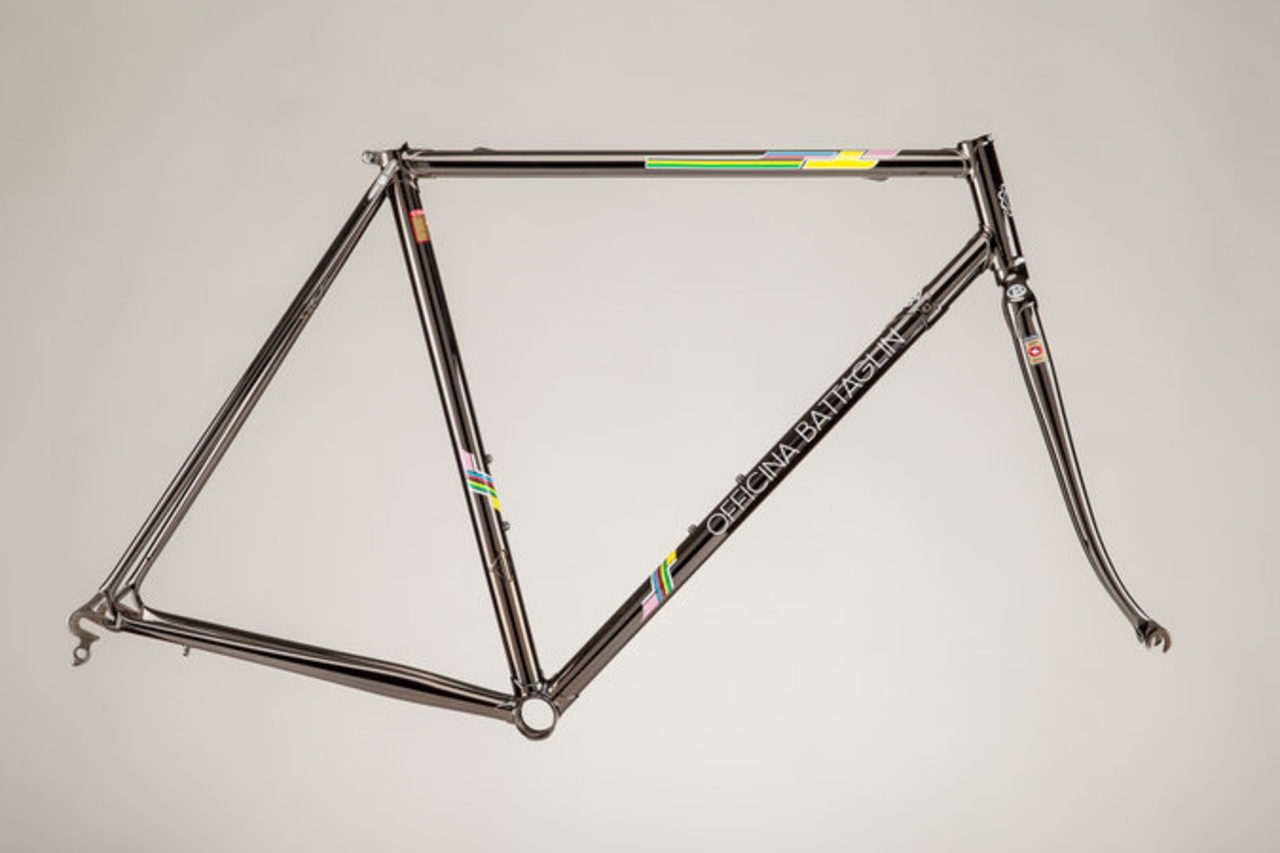 Italian cycling great Giovanni Battaglin, who won both the Giro d’Italia and Vuelta a Espana in 1981, showed up at NAHBS for the first time to unveil his stunning black chrome, diamond studded Stephen Roche anniversary frame, which marks 30 years since Roche won the Giro d’Italia, Tour de France and World Championship road race in the same season - riding a Battaglin frame. 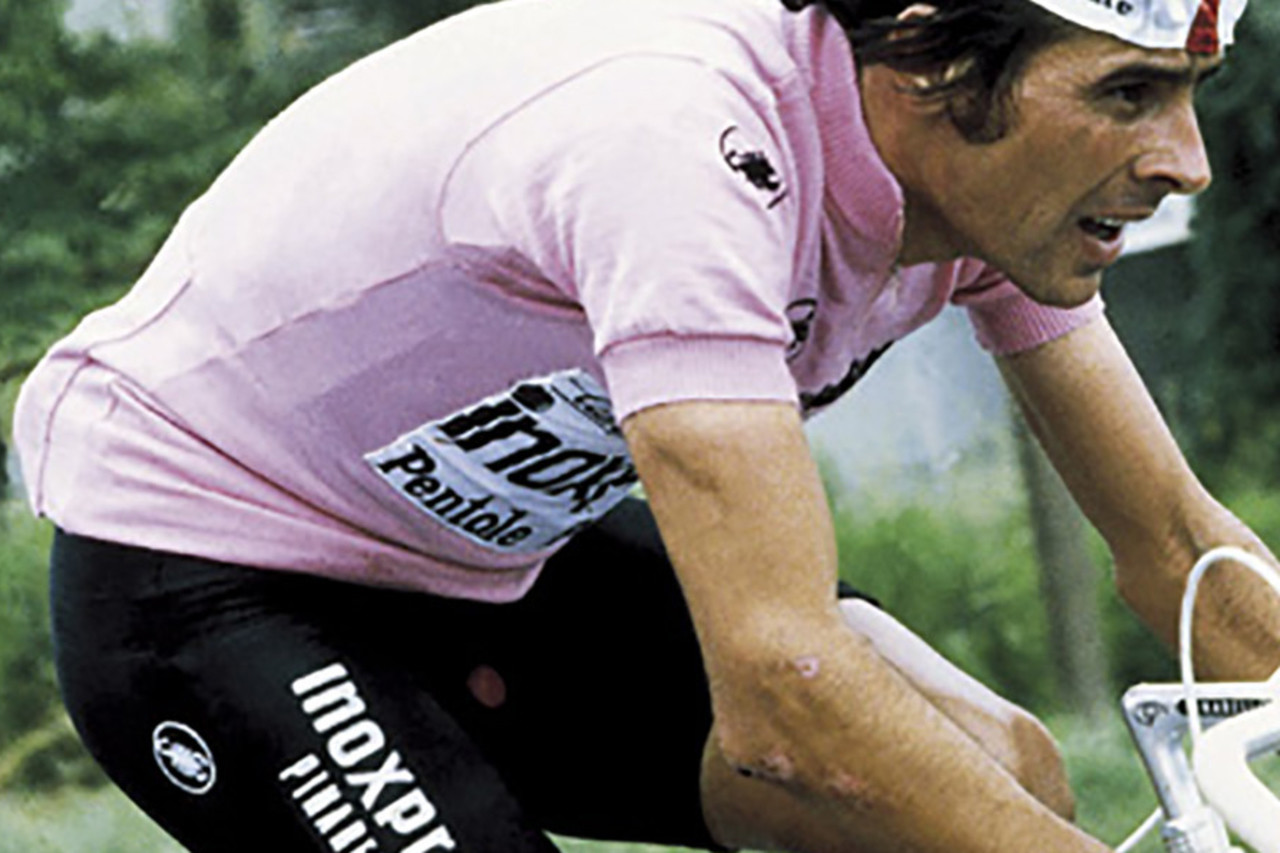 Only Eddy Merckx had earlier achieved the same "triple crown" of prestigious wins. Roche's 1987 haul was only part of a decade-long run of success for the Italian Carrera team, much of that time with the team riding Battaglin bikes. Other star riders like Italian sprinter Guido Bontempi, Swiss climber Urs Zimmermann and classics hunter Erich Maechler added Milan-San Remo, Paris-Brussells, the Tour of Romandie and numerous stages in the grand tours to the tally of wins garnered by the sky blue, white and red-painted team Battaglins. 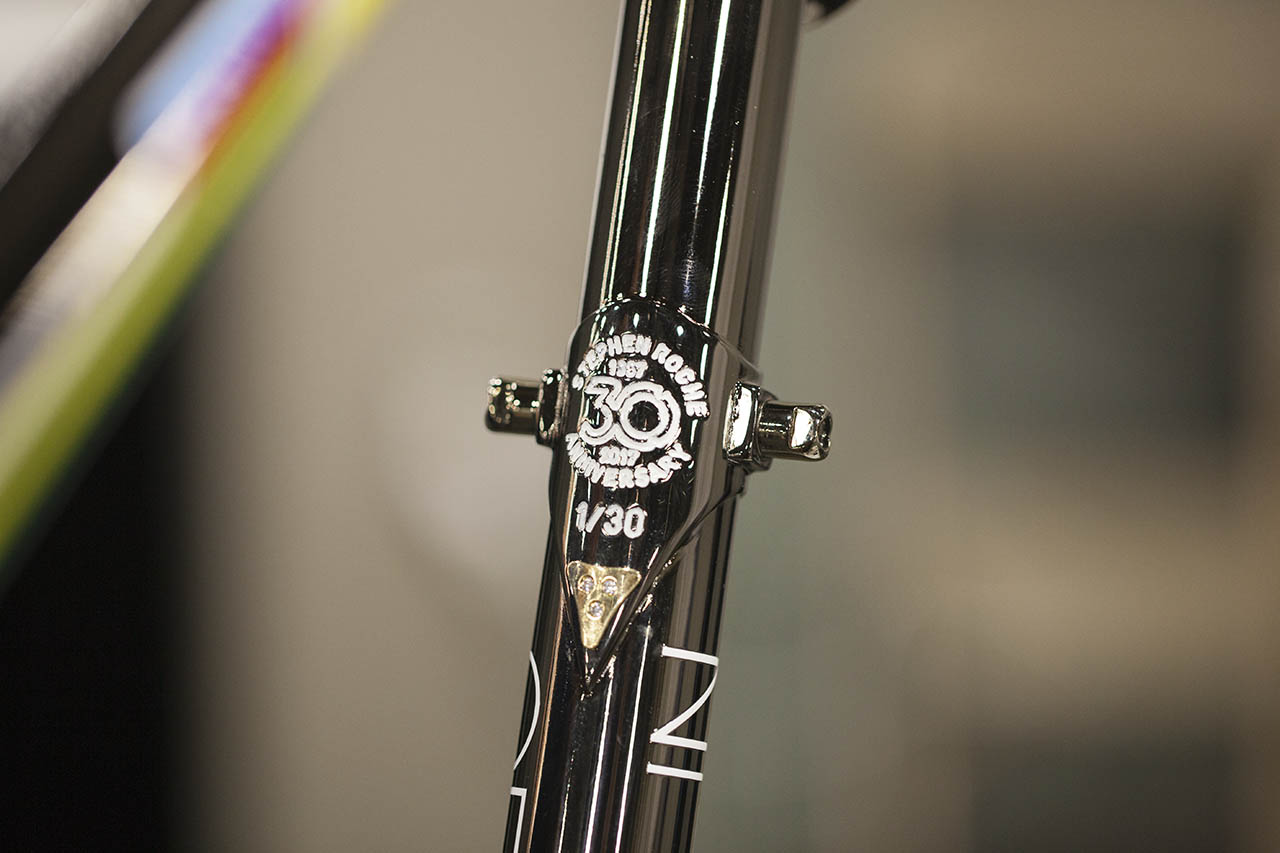 One diamond for each monument win in 1987.    All photos: Paul Skilbeck

The Stephen Roche tribute frame is built with Columbus SLX, as Roche used in 1987, and is finished in black chrome featuring a small gold badge studded with three diamonds. 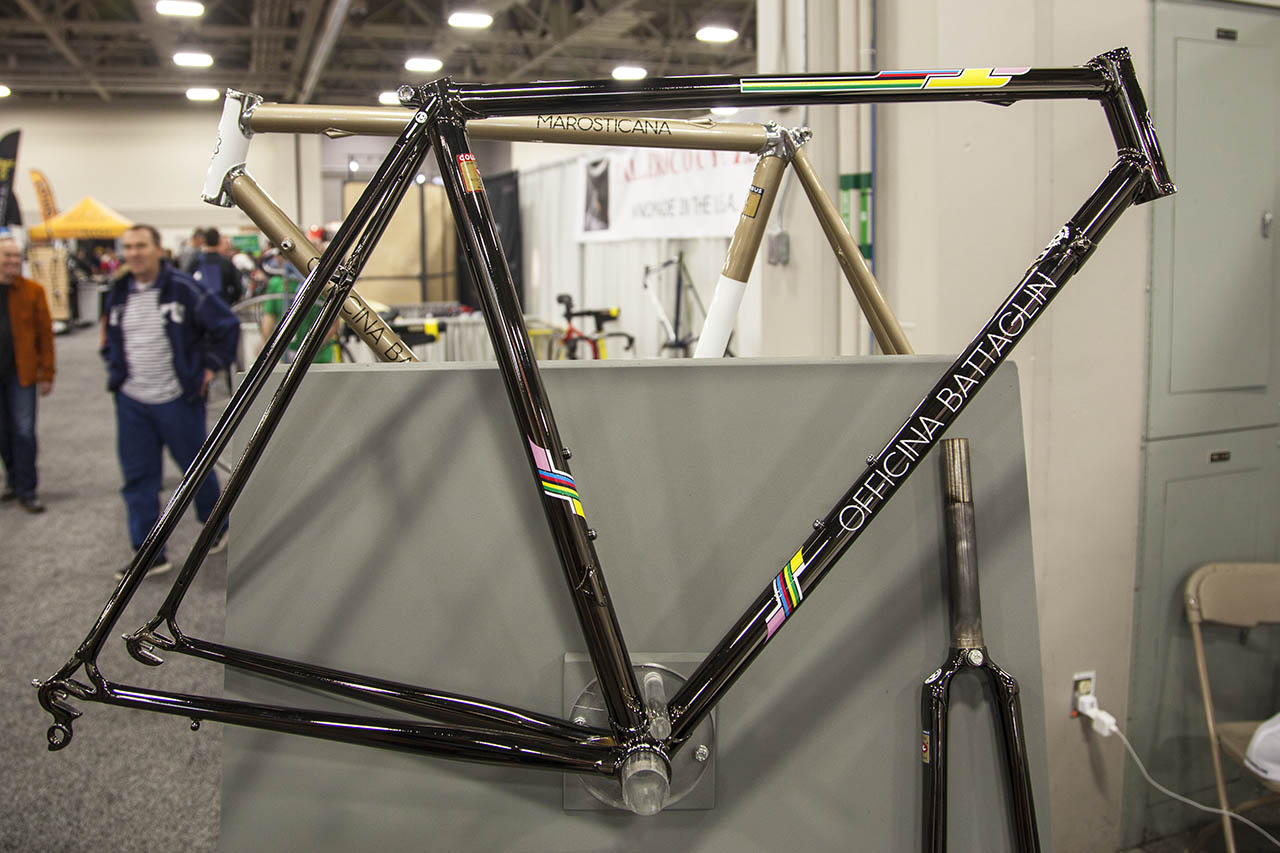 “We are producing only 30 of these frames, which are numbered, and Stephen Roche will of course have number one,” explained Battaglin. 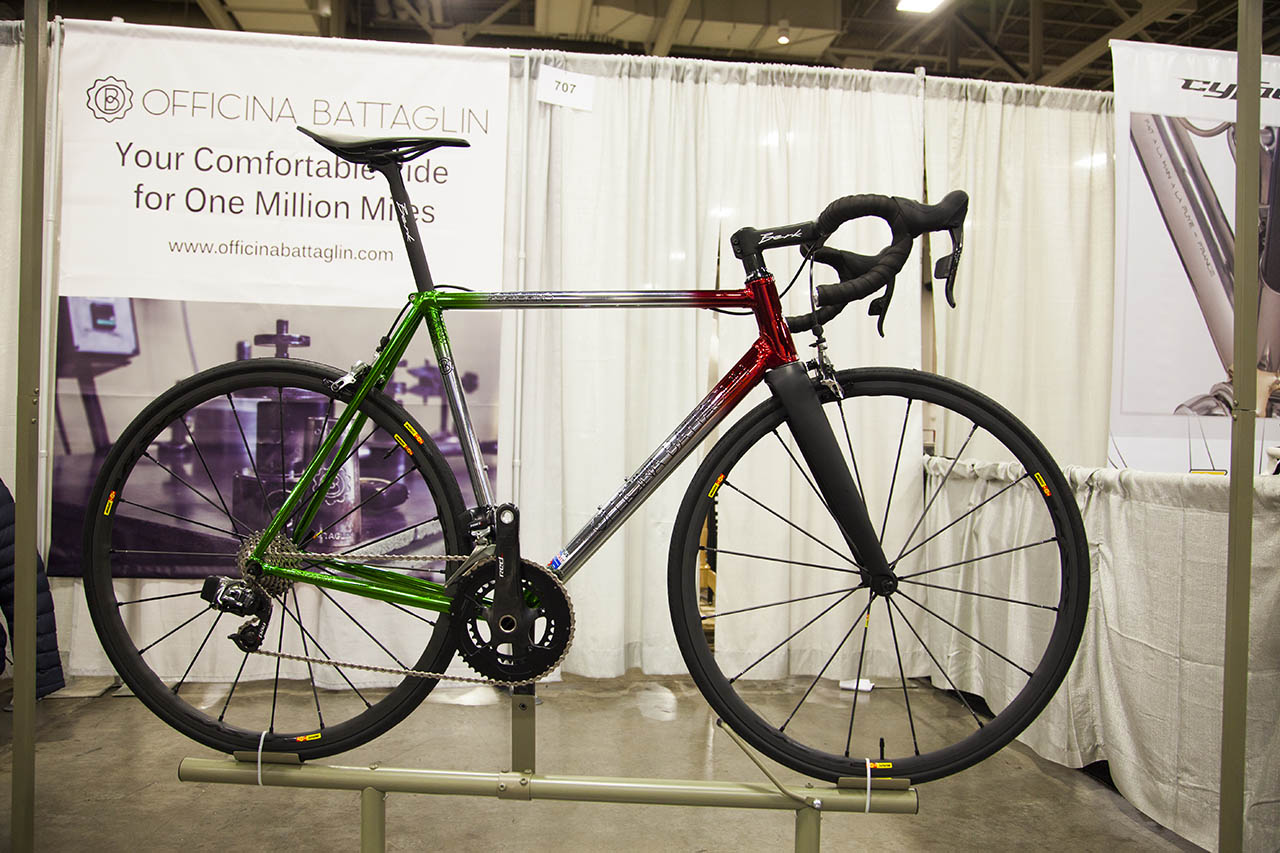 Also launched in the Battaglin booth was the Portofino model frame, which features the oversize steel Columbus Spirit tubing, a tapered head tube and proprietary oversize lugs, which Battaglin is calling Mega Lugs. 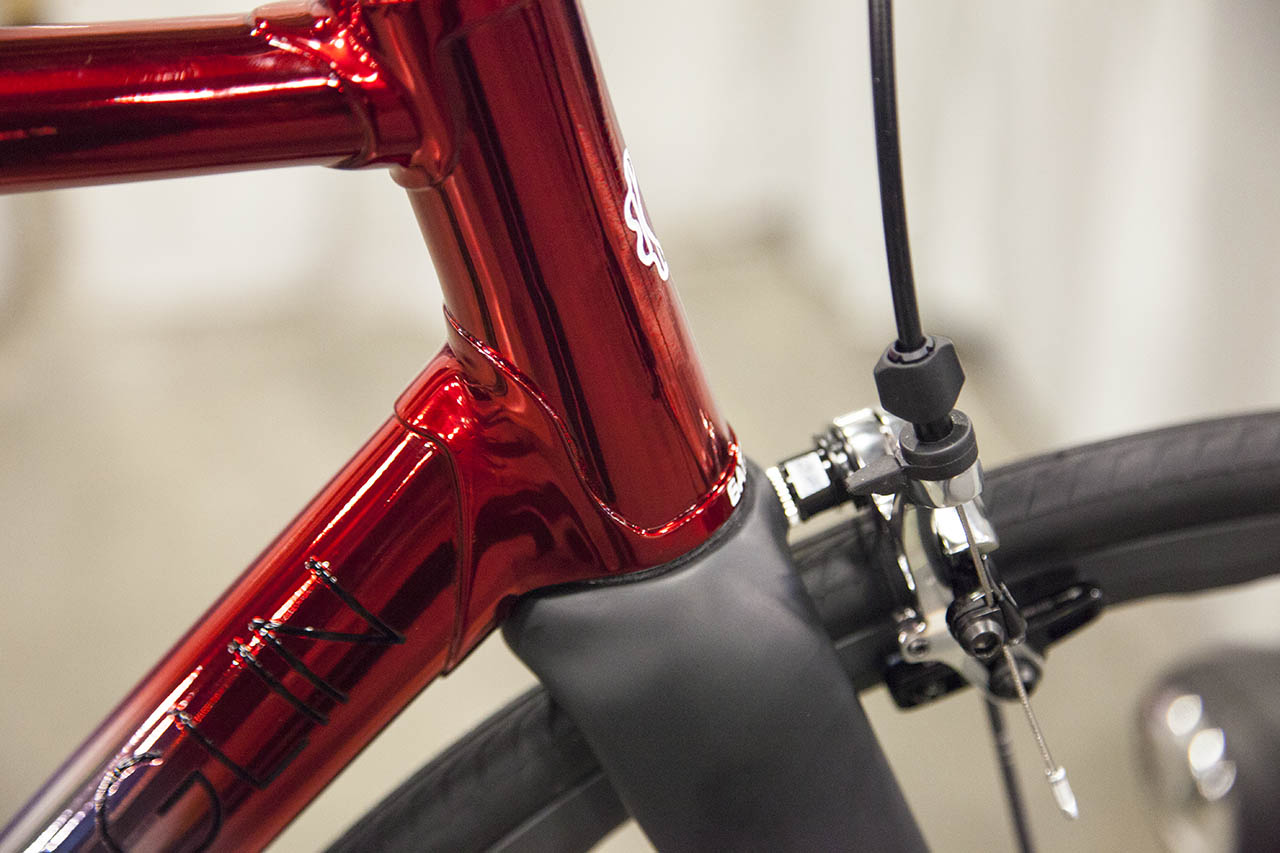 “We are seeing people in Italy, Europe, USA and Asia showing a growing preference for the artisan-made frames at the high end, over the mass-produced frames. Also we understand that cyclists like the modern look of a bicycle, with larger tubes, which is why we have used the Columbus Spirit tubing. Our tradition is lugged steel frames though, so we designed these oversize lugs for this tube set. Going forward we wish to focus on lugged frames,” said Battaglin. 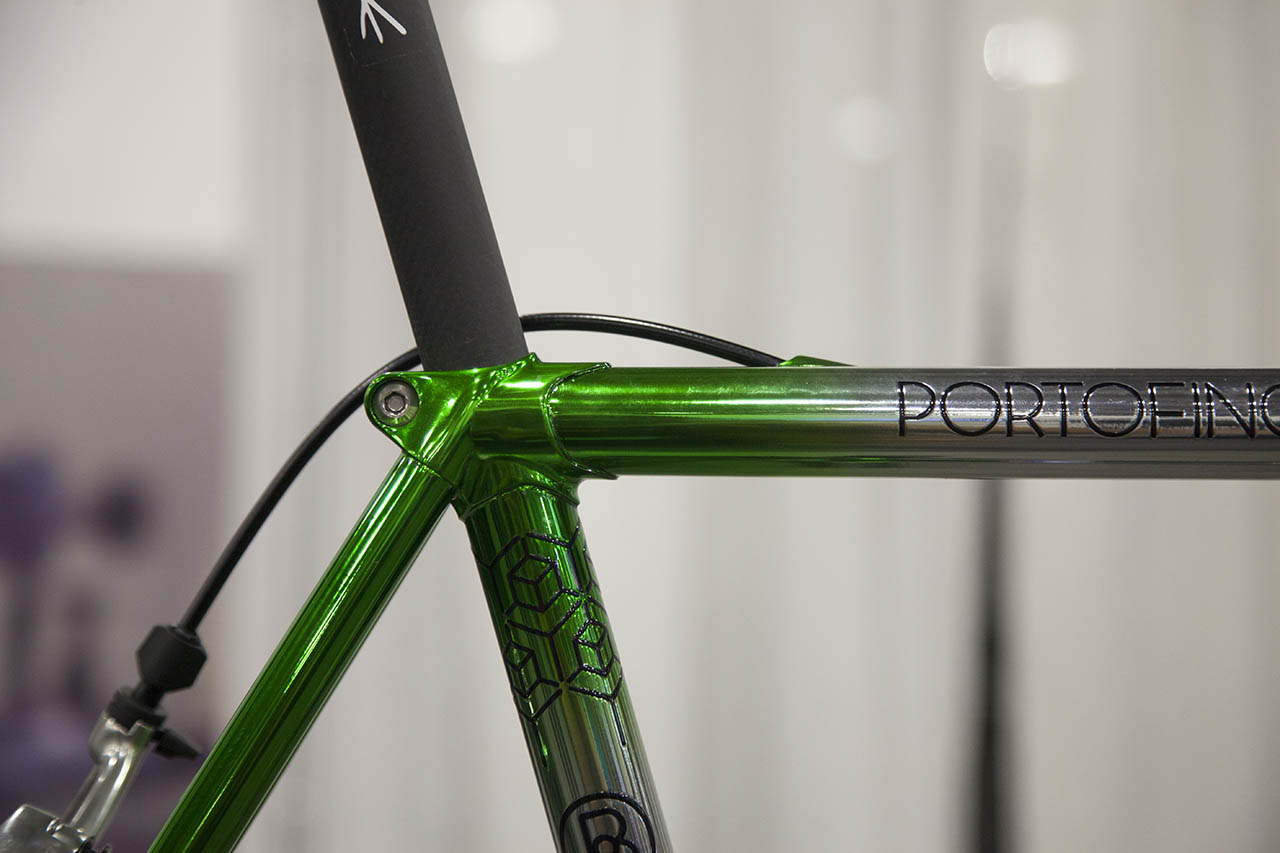 As to his first visit at NAHBS, Battaglin said “It is wonderful to be here among all these beautiful bicycle frames.”