John Caletti is a name in the handbuilt world synonymous with craftsmanship and quality. 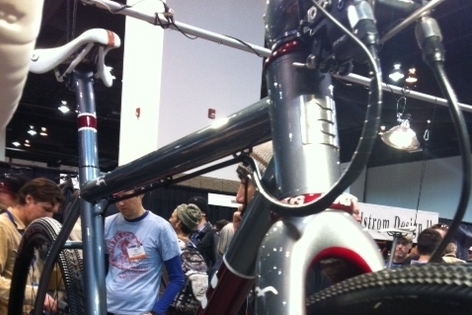 The following story is from Caletti's appearance at NAHBS 2013 in Denver. Caletti Cycles will be an exhibitor at NAHBS 2016 in Sacramento.

John Caletti is a name in the handbuilt world synonymous with craftsmanship and quality.  Looking at the three offerings in his booth, it’s easy to see why.

When asked why he decided to bring these bikes over others, Caletti explained that, “I wanted to show a good mix of what I normally do.  Though I’m missing a cyclocross bike (Caletti sponsors a team in his homebase of Santa Cruz, CA), I feel that the bikes I did bring show who I am as a builder.”

First, he has a mix of newer, innovative components on his bikes. Both road models have electronic shifting, and the road race and mountain bikes have a very new type of carbon rotor not yet widely available. “While I’m extremely comfortable working with all types of components, I like to be open to new ideas and try out new parts to see if they will work well for my customers, who often times come to me wanting very versatile bikes.”

Which bike in the booth is his personal favorite? “The Adventure Road bike for sure.  This is the bike I’m increasingly being asked to build, and I find that people really connect to it, get excited about it.  Oftentimes, it creates a new chapter in a cyclists life; it allows them to get off the pavement and take those little connectors they’ve always wondered about.  It’s a wonderful event to get to be a part of.”

His Adventure Road offering has a few tweaks that make it ideal for rougher terrain.  First, in addition to his signature bi-oval downtube, it has a longer wheelbase for added stability.  Second, the geometry allows for more confidence when the road gets bumpy.  Finally, there is always clearance for a wider tire.  These bikes, while not strictly cyclocross bikes, can also be multi-tasked in a race or two if the rider so desires.

Caletti also is a member of “1% for the Planet”, and as such, donates 1% of all his sales to non profits that serve the planet.  Last year, most of the donation went to Bikes Belong. “As a business owner, you create environmental costs, and this is a way for me to offset those costs.”

For those wanting to be environmentally conscious and get one of the best built bikes available, choosing Caletti is a no brainer.  A base model steel frame runs $1650, with steel forks ranging from $400 – $450.  Also adept in Titanium, a base model in that material starts at $2600.