British builder Timothy Rowan took home ribbons for both Best New Builder and Best In Show at the 2015 Bespoked show, only months after he built his first bike, and had chosen to take the year off to focus on his work. HBG columnist Anna Schwinn visited his workshop in Kent and presents her in-depth talk with him. 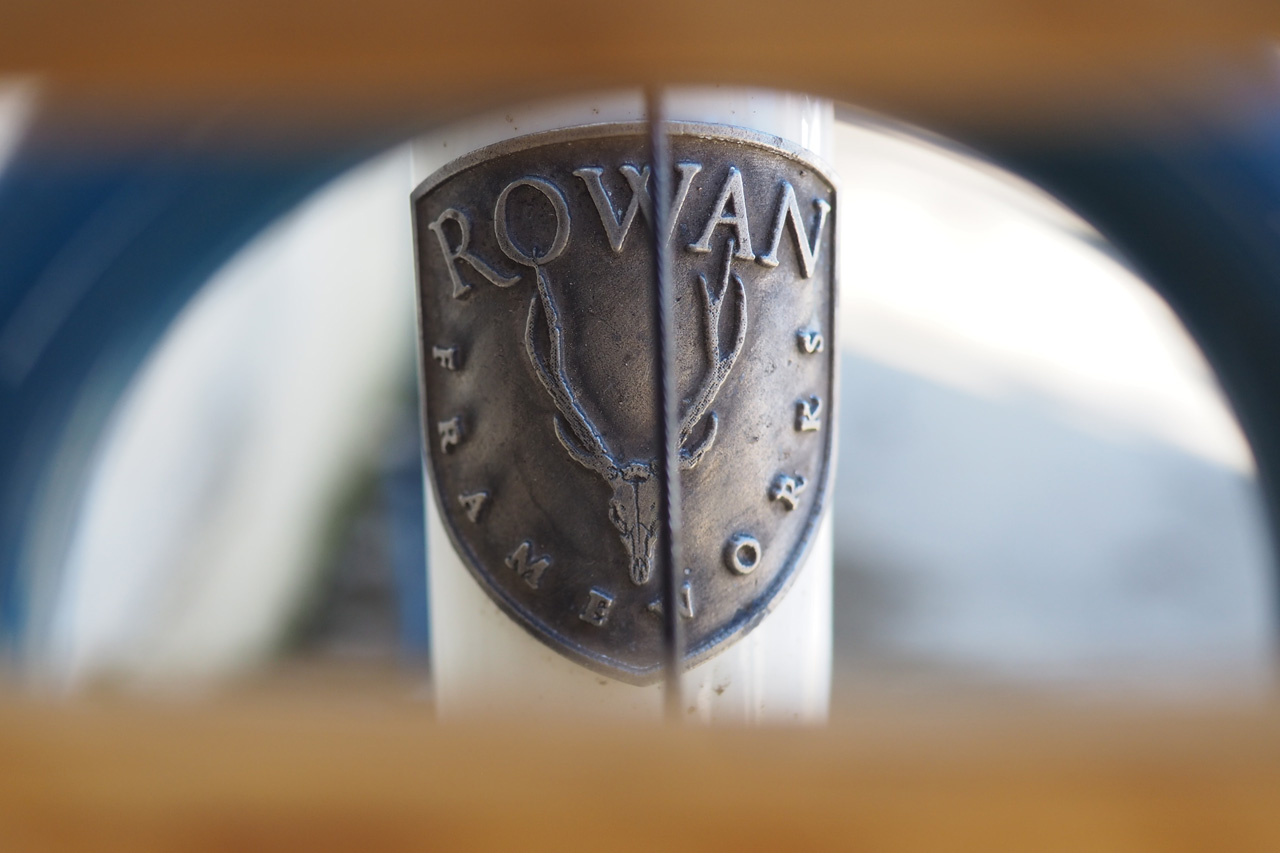 I met Tim Rowan (Timmy to his friends) on the last day of Bespoked this year. The builder took home ribbons for both Best New Builder and Best In Show at the 2015 Bespoked show, only months after he built his first bike, and had chosen to take the year off to focus on his work. The bike that he did have at the show, which he had come to collect, had been described to me by several other builders at the show as their favorite of the Hack Bike Derby submissions due to its unusual design choices and it’s easy to see why. The Rowan Frameworks hack bike featured a special axe mount and solid brass grips- even with rough, unfinished fillets it was compelling.

Rowan Frameworks photo gallery link for MOBILE PHONES (if you cannot see the embedded gallery below):

Tim is one of the most highly acclaimed members of the newest waves of UK builders. Rather than come up through a workshop or apprentice under another builder, Tim, with a young family at home and a third daughter on the way, quit his job of eight years to jump head-first into framebuilding with everything he had. He took a course at The Bicycle Academy, set up his shop, and set to work practicing his skill at hand-mitering tubes and brazing.

Today, he has a diverse range of genres in his portfolio, from bike polo to road to mountain. His waitlist for bikes includes both domestic and international customers (and some famous names in the cycling community, as I was very surprised to see). There are also indications that framebuilding will not be the only thing we see from Tim. As a man obsessed with developing and refining new skills and working with his hands, it was exciting to see a sewing area in his workshop and to hear about his carving projects. 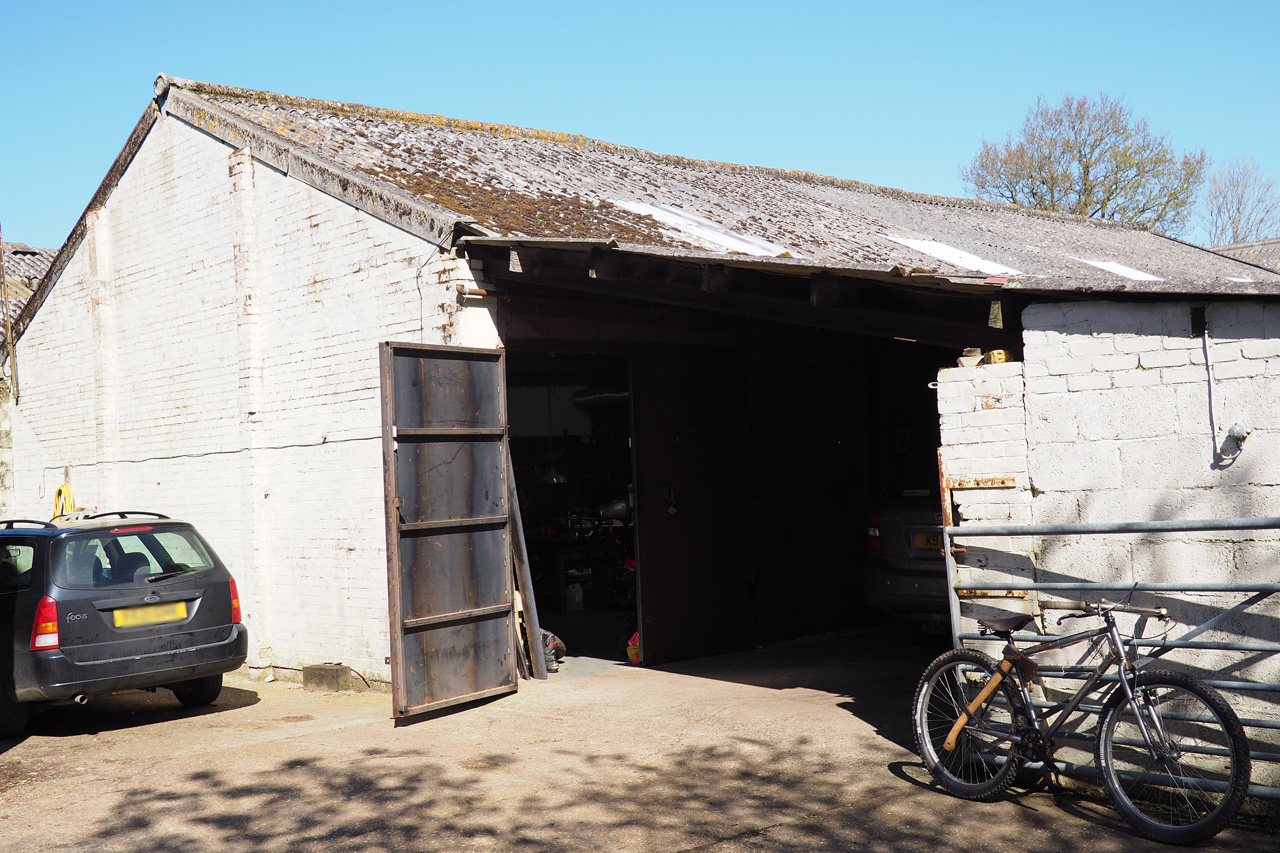 In this interview, which took place on April 18th in his shop in Woodchurch, Tim discusses his unusual path to framebuilding, his process, and the methodology that have made him a new builder to watch.

AS What were you doing before framebuilding?

TR Originally, I was trained in film.

TR Filmmaking, really. I spent the entirety of university [deciding] if I was a director or cinematographer. I’m a control freak so I went into filmmaking and tried to everything myself. That was really fun. I don’t know, one day in the distant future... Did that for awhile. Worked in the woods a while as a lumberjack.

TR We were living on a farm and we’d clear these wide forest tracks and clear the fire wood. You’d kind of scallop the edges, make them good for butterflies with a chainsaw. Then after that, I worked at this outdoor adventure site for I think it was eight years in total. I didn’t really intend on staying. I was a bike guide for a while, leading long distance bike rides.

AS Just around the country?

TR Yeah, London to Paris bike rides. Rides in Egypt and stuff. It was fun, but it was a short amount of time. I took this outdoors adventure job and thought, “I’d probably be here six months or so.” Then eight years later you’re like “wait a minute.”

AS How did you get from that to here?

TR I think all along that time I watched people building in steel, you know? Seeing what was going on. I had a good understanding, always tinkering in bikes. Fixing other peoples bikes. Building up bikes.

At the time it was really- in terms of a “bike builder,” you would piece together a bike. I got into components, trying to make a bike work. On the whole, obviously you don’t have control of the frame- just watching for years and years, watching people come up in the UK and really interesting things happening. I suppose, yeah, taking it much more seriously for the last five or six years and just thinking, one day, that might happen.

Then my father died… that’s a bit of a sort of “fuck it” moment.

AS He’d been a painter, you said.

TR Yes, he was an oil painter.

AS Is that what he did professionally?

TR Yeah. His whole life. Kind of on and off, finding his creativity and putting it down for a few years and coming back to things.

AS Your father dies and you’re like, alright, I need to do something.

TR The job I had, I didn’t feel I was being nourished. I wasn’t learning a specific skill. I’ve always enjoyed using my hands to work, but never really felt like there was some kind of a skill leaving your hands. Like, I looked at my hands and they were clean. I took on that job because it was outdoors and it was doing stuff and it was being physical. But I suppose the higher you get up in a job the more you come inside, tapping on the keyboard.

AS Dealing with more inter-personal stuff.

TR Exactly. Juggling things and managing teams. I think it was literally looking at my hands and thinking it would be nice to learn a skill. So yeah, that was the catalyst, I guess.

AS When was the jump, then?

TR I suppose it was completely backwards. If you talk about a traditional route into a craft, I would say framebuilding, but any craft, I understood that you had to do your time, you had to understand what you needed to know.

AS Here, it seems to be so traditional. You identify what you’re going to do really young, you go through an apprentice process or a special trade process, and then you go into it and you work your way up. It’s this very sort of measured thing. There’s this very strong tradition of it.

TR This was the sort of quandary. I did take a course. Originally I was booked into UBI. I was ready to go out there. Then I spoke to Andrew at The Bicycle Academy. We had a two or three hour conversation on the phone. I just thought, this guy’s mind is incredible. He gets it. He has a passion for it. So I committed to that. To kind of try to get the most out of it, we separated it into two parts. So yeah, got this workshop, quit the job, started setting up the workshop, then onto trying to build a bike, all with Jenny being pregnant with Agnes.

AS With your third? Wow. What did Jenny think about this?

TR She was incredible. I don’t know, she just sort of- sometimes a blind leap is fine if you can see that someone’s painfully yearning for something or just has a need to do something. She just kind of followed me into the darkness- that’s a Death Cab for Cutie lyric.

AS Instead of doing the two week course straight away...

TR … we broke it apart. The first week was bench fitting and cutting miters and fillet brazing. It’s funny- the first miter you make you’re like, “Fuck this, I can’t do this. What have I done? I’m going to have to try to rewind really quickly.” The next one’s like, “Oh wow, this is kind of working. Like, maybe I’m a framebuilder!” And then you’re like, “No, shut up!”

It’s just this constant sort of battle of, “This is work is shit- hold on, this is looking half decent- no, this is shit.” When you put the weight of the world on your shoulders at this point, either that really focuses what you’re doing or it just doesn’t work at all. For a long time it was either one or the other. 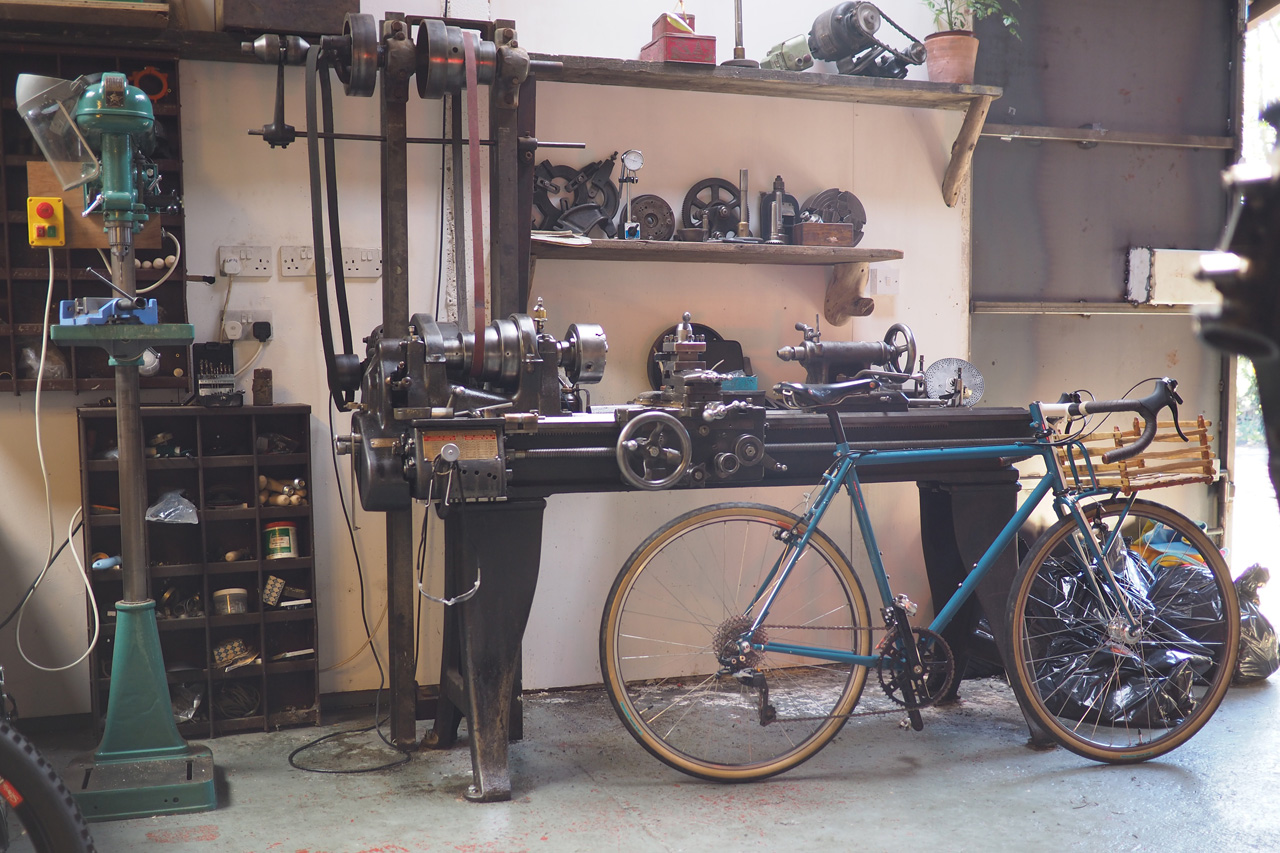 AS Why did you break up the course at TBA?

TR We just came up with that as a solution. After [the first week], I went away and I had five or six months where I could just practice those skills before I would go back and actually build a bike. They do a course where you build a bike in a week, and obviously there’s no real time to build any skills. You understand what’s happening and you understand what you’re doing. But there is no muscle memory. You can understand the theory but there’s no time to practice. So I kind of went away. That was kind of the journey, that shelf.

AS This is you practicing!

TR For each one, there is probably another 30 or 40. But you can see- this miter is good for these reasons, this is bad for these reasons. That’s why the course was so good, it allowed you to be kind of analytical about your work and understand the theory so you could break things apart and see why it was good or not good but, probably more importantly, what you should be doing specifically to make it better. I was like “I’m going to do my homework. I’m going to go do this.”

I’d come in for ten or eleven hours a day and sort of cut miters until I was confident that I couldn’t really make anything better with my hands. I only had the measuring equipment I have, so I’d try to push that to its limits, just making sure that miters were square and tight.

AS So you’re hand filing them? Or just grinding them down?

TR No, just doing the cut by hand, then with a hand file.

AS You’re crazy. That just seems so time consuming.

TR It gets quick, you know? You make three cuts, and then the file. Maybe... ten minutes now? 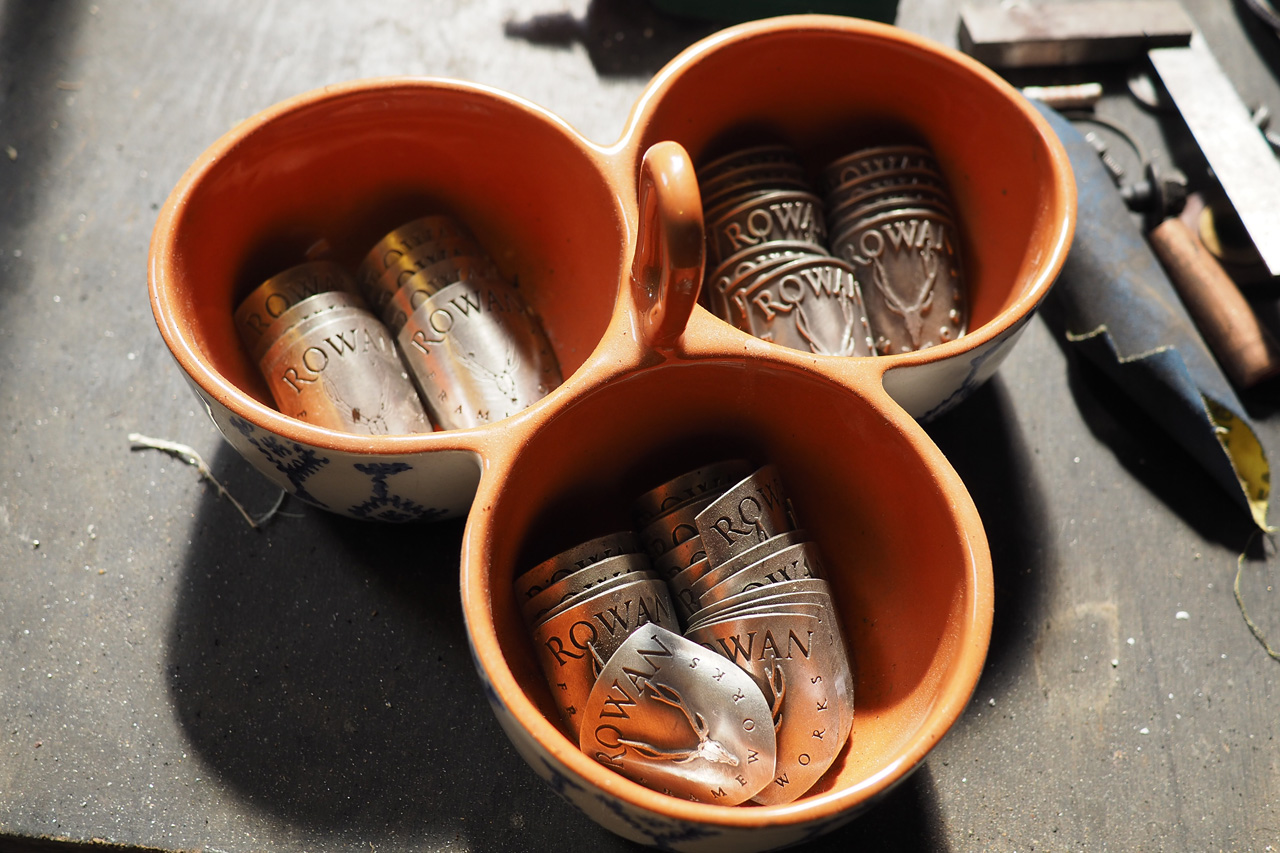 TR So many times I’ve heard that once they make a cut, they finish it up and tidy it up with a file anyway. It’s more physical if you’re doing everything by hand, but it’s a good part of it I suppose.

It’s a lovely process to go through. Like, okay, I’m going to sort of make the equivalent of 30 or 40 bikes, I’m going to put them together and cut them apart and study them to see what’s going on.