Europe's main handbuilt custom bicycle show started with a full house on Friday, April 15, in Bristol, England. Exhibitors from around the world attended the show at Brunel's Old Station, an elegantly engineered structure that provides a fitting venue. 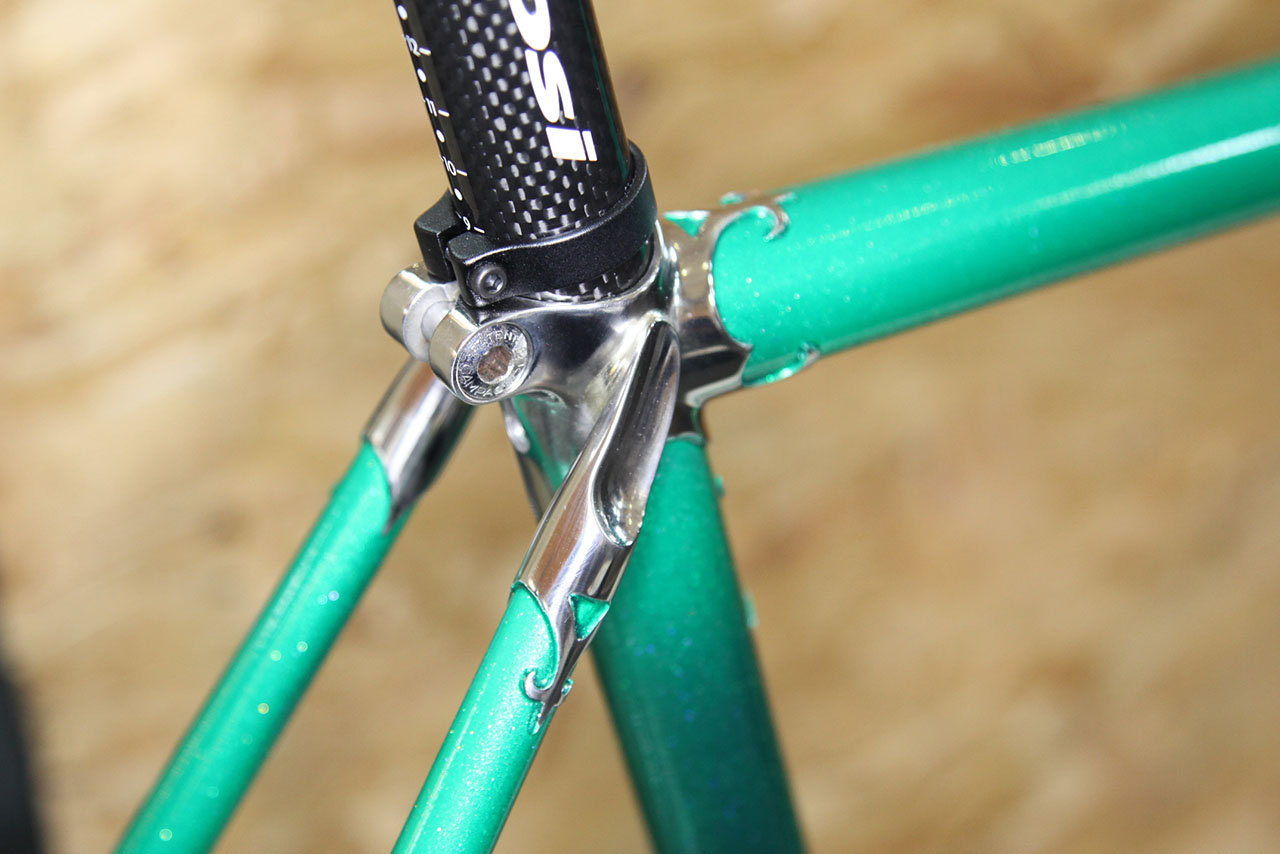 Filed lugs around the seat post on a Veronha frame. Photo: Paul Skilbeck

For a country close in size and population to the state of Calinfornia, the United Kingdom produces an impressive handbuilt custom bicycle show. One hundred and nine exhibitors spanning a wide range of bicycle types and related products and accessories drew a full house on the first day of the sixth annual Bespoked show. Here is an initial glimpse, across the spectrum, at some of the artisans and their work.

Veteran builder Winston Vaz recently launched his own frame building brand, Varonha, in 2014 after working nearly 35 years for other companies including Holdsworthy and Roberts. He showed polished customized stainless steel fleur de lys lugs on this steel track frame, and also in his booth had a one-off road bike with 1" Reynolds 953 tubing.

Classic lug styling on a contemporary Holdsworth frame. After acquiring the 85-year-old Holdsworth name in 2013, Planet-X revived several of the classic model names, including this Cyclone, under the direction of Lorenzo Alitissimo.

Employees at London’s Cloud 9 Cycles started making the Street Racer model bikes for their commuting trips and liked the quick feel and handling so much that in 2013 these bikes were offered to customers. Also available as a fixed-gear, the bikes feature long top tubes which complement a 50mm headstem to make the bike more maneuverable in dense city traffic. Staff members like the narrow handlebar setup, although most customers, they say, opt for something a little wider. Tubeless tyres allow for lower pressures and greater comfort and traction. Carbon forks are fitted, usually Enve or Whiskey Parts. Frames are made to measure, and the basic frame and fork with a Chris King headset costs GBP1500.

Quoc Pham had a men’s clothing business and commuted by bike to work. Unable to find a cycling shoe he was comfortable wearing all day and that would fit with his sartorial style, in 2010 he decided to start making his own. Initially the shoes were aimed at commuter cyclists and were one hundred percent leather, but this year he has introduced four models of performance-related shoes which use mainly synthetic materials. All shoes are made in his own facility in Kingson Upon Thames.

Dutch artisan Jean Michel Timmermans showed a range of bicycle bags and racks, including this voluminous handlebar bag for the randonneurs and shoppers who like the payload up front.