The Oregon Bicycle Constructors Association celebrate their first decade with a new venue that offers more space and expanded activities for the annual show this weekend, August 12-13. 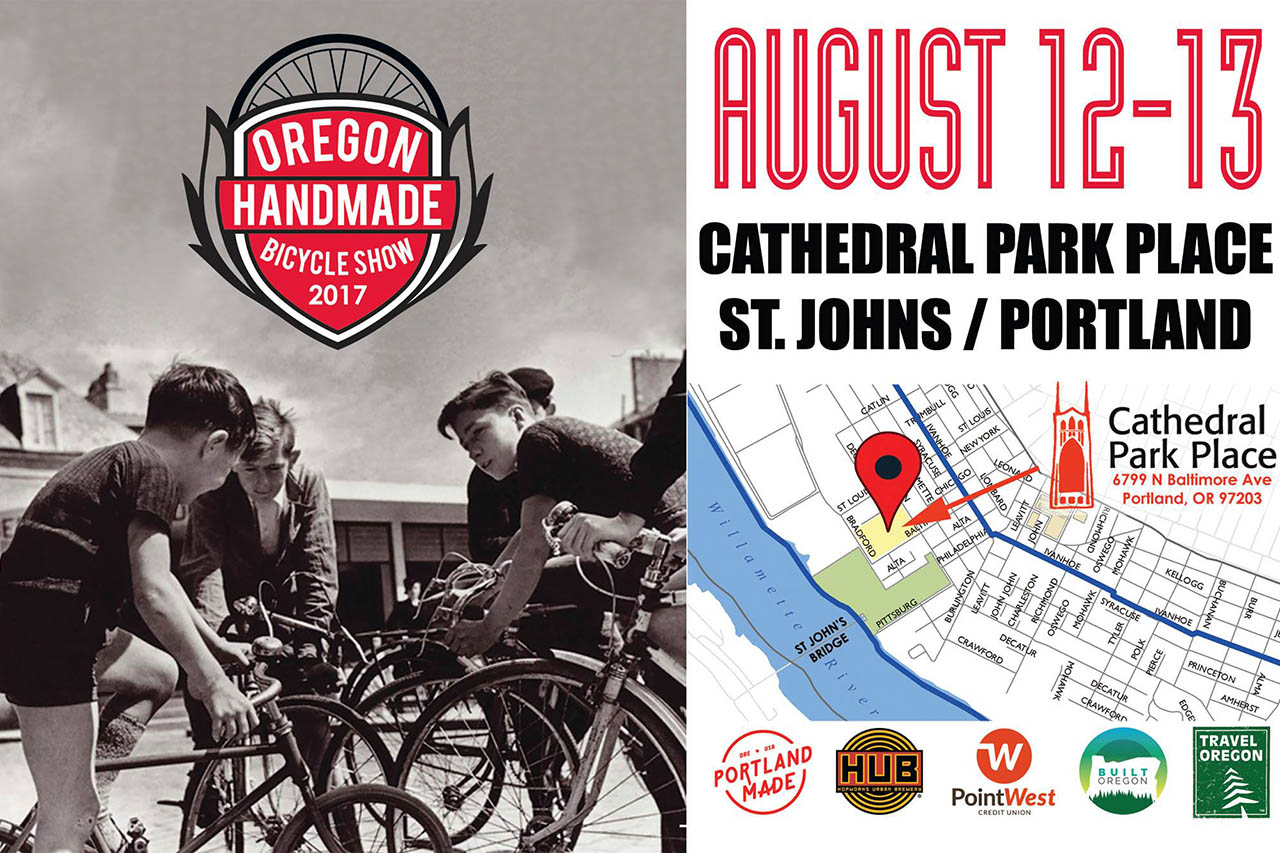 One of the most vibrant and durable custom bicycle cultures anywhere on the planet exists in Portland, Oregon, which is readying for the 10th edition of handbuilt bicycle shows in the city with the Oregon Handmade Bicycle Show at Cathedral Park Place, Portland, this weekend, August 12-13.

The Oregon Handmade Bicycle Show remains the longest running regional show of the current era in custom handbuilt bicycles history. The visit of NAHBS to Portland back in February 2008 sparked an awareness of the need for a regional show, and a preview event run in the city gave organizers confidence to move swiftly and build on the momentum.

The early success of the Oregon show may have influenced the appearance of regional annual shows elsewhere in North America, some of which have proved durable too. There is the New England show, now in its seventh year, Texas has had a custom bikes show most years since 2008, and more recently Minnesota builders have started Minnecycle, which had its third edition in May this year. A less formal approach was taken by Northern California’s Meet Your Maker events, based on rides and beers in a social setting with framebuilders, which for the past couple of years has worked closely with Giro’s Grinduro event.

This year the Oregon Handmade Bicycle Show moves to a new venue, Cathedral Park Place, a stone’s throw from the landmark St. John’s Bridge that spans the Willamette River some six miles northwest of downtown Portland. Dave Levy, owner of Ti Cycles, president of the Oregon Custom Bicycle Association, and an early organizer of the Oregon Handmade Bicycle Show, is optimistic about the new venue, the home of the renowned tubing and parts supplier Henry James Bicycles - a pillar of the North American frame building industry.

“Chris (Merrill, of Henry James) brought us the Cathedral Park building and he’s been very active in getting it set up for the event. The building has a nice covered parking garage where we've located the event. We put in a bunch of extra lighting, and it’s well laid out with a big open space. We will do beer service and have a bicycle-specific art show going on at the same time. The space has tremendous potential and we’re free to build it out any way we want,” says Levy. While the large national shows serve as beacons for the industry, the relaxed pace, intimacy and community at the small regional shows gives these a must-attend status, with nothing else quite like them in the bike biz. Given that NAHBS was the event that awoke Portland to the pent-up need for its own show, Levy thought it worth looking at the distinctions, which apply equally to some or all of the other regional shows too. “At small shows like ours (exhibitors) have a chance to spend more time with attendees. A large trade-show style event like NAHBS is important, but it tends to be an overload. It’s hard for attendees to take it all in.” There's plenty of time to chat

“Also at our show you don’t have a lot of builders doing the same thing. At NAHBS there tend to be themes each year, for example painted Ti frames. Here builders have individual niches. Everybody’s doing their own thing, not being incrementally better in the same thing.”

The open-plan layout of the Oregon show gives it a significantly different appearance to the trade-show approach.

“We moved away from pipe and drape four years ago. Now the show has an open art gallery feel to it. People can set up whatever they want. It’s nothing like a convention, we threw all that out the window. Some will have bikes and a couple of backdrops, others have full-on trade-show booths. This year we have extra space so we’re letting booths overflow, so things like tandem displays will have room to breathe. We’ve found this approach to work really well, it has a more relaxed feel, people aren’t real formal here. Over the years the number of exhibitors at the Oregon show has ebbed and flowed, but Levy reckons that the regional industry is back on the uptick.

“We started the Oreon Bicycle Constructors Association nine years ago, starting with the show, then developing the association out of that. Back then we had 20-plus active builders in the city and 40-plus in the state. The economic downturn caused lots of those builders to quit. At the best of times this is not a lucrative business so it’s difficult to find a way through downturns with little in reserve. But now we’re back up to close to 20 builders in the city. A lot of these are new kids coming into the industry, graduating from United Bicycle Institute and hanging up the shingle. It’s fun to see the new blood.” At the time of writing, 24 companies will exhibit at the festival event, 19 of which are frame builders. One painter is signed up too, Black Magic, which amazed show-goers at NAHBS in February with stunning paint work.

Among the newer builders at the Oregon Handmade show are:

Circa
A patent-pending bonded-lug design allows us to quickly deliver bikes that are tailored to a cyclists riding style, body type and personality in a way that no other manufacturer can.

Celilo Cycles
Ready to surface after three years in the basement working on design and development.

Sim Works
A Japanese company with US distribution based in Portland. They contract with big names among cycling manufacturers to build concepts they’ve designed, promoting the brand of the specific company they’ve commissioned to make the part. Have a reputation for making great short-runs. Aluminum lugs and tubes by Circa PointWest Credit Union is a cycling advocate and longtime partner of OBCA.

The event starts on Saturday, August 12th at 10:00 am with a ride from Elevator Cafe & Commons at SE 10th and Main to the Cathedral Park Place venue.